Do you ever get that deck-building urge? You know the urge: As spoiler season continues, you begin to build decks in your mind with the latest cards youâve seen. Itâs time for a deckpocalypse of funâall of these ideas are matriculating from head to paper.

I could do whole articles around the ideas I have for just one card, imagining multiple ways to use and abuse it. What are the different angles of attack to unlock the secrets of the latest spoiled card?

The problem is that I am a Johnny. Hello, Johnnies! Right now, Iâm talking to you. Do you ever grow frustrated when you read a spoiler article, and in the article, the author has spoken, at length, about fifteen or twenty cards or strategies that use the spoiled card to good effect?

I hate when I am reading a spoiler article that reveals a new card when I immediately have an idea of where to take itâonly to see a few sentences by the author about that very idea. But that was my idea. Itâs not fair! I had ten seconds with the card, and I already knew the direction to go, but the writer probably spent hours with it, did some research on Gatherer, and more. My idea was stolen! We Johnnies often have a sense of ownership of our creative masterpieces.

Not every Johnny is identical, and not every Johnny is like that, but I relate to those who are. So I try to keep my articles in spoiler season focused on one idea for a deck. Perhaps I can spark the creativity of a Johnny by using a card in a certain way, and yet leave open a lot of space. That way, I can accommodate Spikes and Timmies in my normal wayâand us Johnnies, too!

The first card I want to focus in on is Xenagos, God of Revels. He seems like a fun God, right? A lot of stuff can become powerful really quickly, so letâs take a look under the hood at one such casual deck I made really quickly.

Xenagos fuels your life! Here, you have the double-accelerant of Birds-plus-Caryatid that move into some traditional Fires of Yavimaya fare. Flametongue Kavu is a classic powerhouse that is seeing another day in the limelight as a beater and as a bringer of death. From its tongue. Of fire. 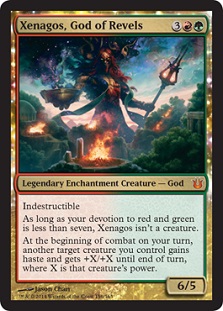 Xenagos is great because you can easily envision all of the creatures as big, giant dorks of love. Flametongue Kavu? 8/6 baby! Bloodbraid Elf? 6/5! And the creatures become better and better!

I grabbed the Hellkite Tyrant because it could legitimately be played the turn after Xenagos and has flying plus trample already. So you can have a 12/11 creature that will probably blast people out of the sky. Spellbreaker Behemoth is great the turn before Xengaos for two major reasons. First, you can play it the turn before Xenagos and then keep the God of Revels from being countered. Nothing will stop the arrival of his majesticness! Second, you can drop Xenagos, enbiggen your Behemoth, and then swing with its newly-swollen 10/10 body. Both are very sexy here, and perhaps they might even become BFFs.

Timbermare (and Thundermare) is another trick from the past that is a great ally to Xenagos. Play it with Xenagos in play, tap everything, and get in a guaranteed 10 damage from it. With blockers being given a fond tapping due to Timbermareâs ability, your opponent will need a trick like Masako the Humorless to pull out the game. (Or perhaps just a Fog.)

A few other tricks round out the deck. Acidic Slime will blow stuff up and hold down the fort. Iâm not expecting a lot of swings with a 4/4 deathtouch Ooze, but you never know. A few lands, including the scry Temple, are included, and the deck is called on account of awesome!

I also had a great idea for a Standard-style Xenagos deck. For those casual players among you who prefer a more Standard-prone deck, this is for you.

In particular, I enjoyed the interaction between Xenagos and Ogre Battledriver. The Ogre can act as a backup Xenagos to get in hasted hits in case Xenagos is countered, discarded, exiled, or undrawn. Plus, if you have them both out? Ouch! Consider this:

Turn four: Battledriver; fifth turn: Xenagos, swing with anything. Now drop the aforementioned Hellkite Tyrant. It gets +2/+0 and haste. Now double it with Xenagos, and you suddenly have a 16/13 flying trample, and I suspect that you win that game. Even a humble Kalonian Tusker becomes a 10/8 beater with a Battledriver and Xenagos in play.

Anyway, I made some obvious changes: Elvish Mystic in for Birds of Paradise; one red 4-mana 4/2 creature with an enters-the-battlefield ability is swapped for another (Flametongue Kavu for Fanatic of Mogis, in case you couldnât figure out that puzzle); Ghor-Clan Rampager heads in for the Spellbreaker Behemoth as another 4-mana body that can really work well with Xenagos (check out its base trample). Domri Rade also makes and appearance, and this âWalker is sexy with the Xenagos creature love.

This is a deck Iâd be comfortable rolling with to Friday Night Magic some week. Iâd probably lose here and there, but itâd be fun!

All right, time to leave his highness along and check out three other decks I have built for you today.

"Champion of My Death"

If youâve read, like, ten of my articles, you know the fondness I have for this archetype that uses cards such as Buried Alive and Nether Shadow to harness the graveyard. So take a gander at Champion of Stray Souls, which is another card that works well in this framework. 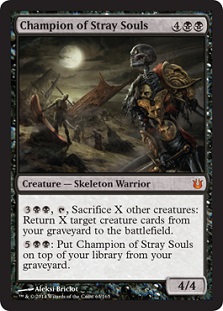 The goal of these kind of decks is to use and reuse things like reanimation, sacrifice effects, death triggers, enters-the-battlefield triggers, and such in order to create a powerful enough board state to win the game. I tossed in some examples here in order to give you a nice idea. I have written a large primer on this stuff a few years ago. (You can find it here. Itâs about three years ago, and thus, itâs a bit out of date with recently-printed cards, but itâs still a keen consideration for any player looking to build around these various ideas.)

You can see some fun abuses hereâcards such as Helm of Possession, Carnage Altar, Attrition, High Market, and Mind Slash demonstrate the abusiveness of sacrifice triggers that can recur. The power of triggers such as Grave Pactâs, Pawn of Ulamogâs, and Blood Artistâs mount as the sacrifices commence. Combined with stocking the âyard with goodies via Buried Alive and featuring self-recurring dorks, the power a little deck like this can unleash is pretty obviousâ.â.â.â

â.â.â.âAs is the Championâs role in such a deck. After putting it into your graveyard (or after an unfortunate death), you can put it on top of the deck to be drawn anew. Plus, you can sacrifice some of your self-recurring dorks to bring out others. I added It that Betrays to give you a bit of a reanimation style, but we can push that. Perhaps Butcher of Malakir would fit this version of the deck better than Grave Pact, as one example. Tweak it to your heartâs content. You get the point: The Champion has some strong flexibility for a deck like this.

"Of Spirits and Sphinxes" 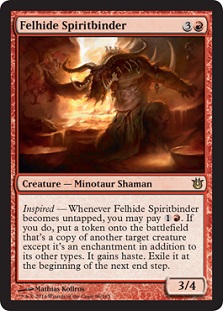 I wanted a deck that would try to untap Arbiter of the Ideal and Felhide Spiritbinderâbecause both can win games. The first can spit something out from the library, and the other will twin a creature. These are the sorts of abilities that tend to win at the kitchen table.

The Arbiter wonât put out enchantments or work with sorceries or instants, so I kept those out of the deck entirely. I just focused on creatures, artifacts, and lands. That way, you will never blank on the Arbiterâs ability. I added cards that usually would be good for both the Arbiter and the Felhide guy (they work well together as a tag teamâone can spit out a big guy, and the other can Heat Shimmer him).

You can see a variety of ways to untap the creature (Umbral Mantle, Crackleburr, Sword of the Paruns) and tap again (Sword, Tradewind Rider, Crackleburr, Hair-Strung Koto). Or you could just attack and then untap laterâif you prefer doing things the old-fashioned way.

Into the deck went some fun cards: Solemn Simulacrum, the Top, and such. I even tossed in the Aerie Worshippers because their inspired works nicely, too. Since I already jumped through hoops building the engine, why not add another pair of cards to harness it?

All right, one more deck; ready?

I looked at Epharaâs Enlightenment and saw a lot of potential for abuse due to its self-bouncing nature. As someone who really enjoys self-bouncing creatures and the tricks that mechanic inspires,1 this one rubbed by funny bone. 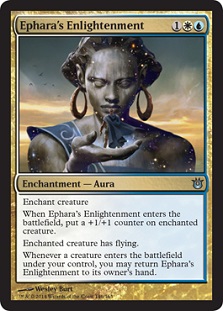 So, the goal is to abuse the self-bouncing nature of the Enlightenment, and Conviction was added to give the deck eight self-bouncing Auras. What fun could we have with that? Well it turns out, thereâs a lot!

First of all, Mesa Enchantress and Kor Spiritdancer will draw cards when I play them. So the self-bounce enables me to gain cards. We all like cards, right? So yay! (I stayed away from Sigil of the Empty Throneâitâs a bit too obvious and overused.)

Note that Hero of Iroas reduces their play costs by 1 mana each, so the ability to rinse and repeat is made easier on the mana. Thanks, Hero! We can also cast the Aura on the Hero for an additional +1/+1 counterâor on the Triton Fortune Hunter for a card (or on the Kor Spiritdancer if I want to make a pure beater). Playing an Enlightenment on a Hunter with an Enchantress out enables me to draw two cards, and thatâs without me working hard. I also added the Ajani's Chosen and Celestial Ancient triggers to push the deck even further.2

Control Magic and Faith's Fetters seemed to be useful choices for control purposes. I can steal stuff and lock off annoying permanents, and they still trigger my engines in place. I wanted a couple more enchantments to round out the deck, and I considered other options before settling in Ephara. She works here. Just donât tell a God that she was the final cut in a deckâsheâs liable to bring the smash down on you!

Anyway, I hope that you enjoyed todayâs look at five decks inspired by Born of the Gods. Like most writers, Iâll be writing some more thoughts on the set here for the next while. So enjoy the new season and new cards!

1 One of my epic decks is Equinaut, a deck Iâve written about a ton. It uses the engine of self-gating creatures with Equilibrium to devastate the board. Read about it in my Primer here. Itâs even longer than the Nether Shadow primer!

2 Note that this article was written and finished a few hours before the Meletis Astronomer was spoiled. It suits the deck perfectly, and it would probably sub in for some cards. (Iâm not sure which ones, but it is a powerful critter for this deck.)