Hello folks! Welcome back to my Real-Life Deck series. I have another deck I just made in real life (as opposed to many of my articles online that are made in the aether).

A while ago, I made an Ezuri, Claw of Progress deck around the combo of Prodigal Sorcerer (Tim) and Fungusaur for my Budget Commander series that was pretty fun. Check it out here!

This combo, which has been around since the game existed, let's you tap one of your Tims to shoot your Fungusaur for a damage which will grow the Fungusaur. The good part about the combo is that Tims can also work very well as a board control or player kill, so they have added value.

The deck was actually inspired by Spiny Starfish, an old school Blue regenerator that makes 0/1 Starfish tokens whenever it regenerates, which is ton of Blue flavor, even if the mechanics aren't in line with the color wheel. Do Starfish live in the sea? Do they regenerate? Do they make other Starfish afterwards? Yes, yes, and yes. Sounds like a realistic card to me! But the flavor is on, but the mechanics take a back seat. But the card is fun, and I figured that a deck with Tims that shot the Starfish could regenerate and make a bunch of dorks. But that's about the only Blue card that wants to get hit, but Green has a lot. Thus, I build my Budget Commander deck.

I could have sworn that this deck would be a fun little deck that I wouldn't likely buildâ.â.â.â

And then Ixalan hit the streets, and everything changed! In this set, we have a huge inspiration of Fungusaur. We have a Dinosaur themed set with Dinos that are enraged as they take damage, some of which are actual versions of Fungusaur proper. How can I not embrace that and build a real-life version of the deck?

And then we got some more great cards with Rivals of Ixalanas well! Wow, this deck needs to be built. Here it is!

Below I'll show you some pics of my deck and look at a few card choices I made as well!

And there we have it! Note that I retained most of the Tim Targets like Spiny Starfish and Hornet Nest.

1. Tims. I want to emphasize cards that ping for a damage. Everything from Staff of Nin to Zuran Spellcaster are in this deck. I even include cards like Triskelion or Viridian Longbow. Again, we need to shoot stuff, and the more pinging support I have in this deck, the more board control I offer as well, and while some Commanders are going to not be bothered with their big ol' butts (such as Surrak Dragonclaw) many are threatened by an ongoing Timming that will kill them over and over again, driving up their cost (such as Edric, Spymaster of Trest).

My favorite Ping effect in this deck is Acorn Catapult! You can tap to shoot one of your guys for a trigger, and then make a 1/1 Squirrel as well! It's a great combo. Imagine shooting Hornet Nest and making two tokens! You can dole out the creature-age with Acorn Catapult. I am running a number of effects that make tokens, from Acorn Catapult to Spiny Starfish. Feel free to add in some effects that abuse the Opposition in this beast. Maybe Squirrel Nest?

Anything that pings and doesn't suck is here. I don't care if it's me swinging with Ballista Charger! I just want to get those Tims up and running to ping my stuff away!

2. Targets. There are a number of cards in this deck that are targets. In fact, I think it'd be really fun to draw actual targets on the creatures! Fungusaur is the obvious choice here, but we have loads more! I have Fungus Sliver too, which is great. We can make tokens with Hornet Nest or Saber Ants.

Another great target is Sprouting Phytohydra, which can be shot over and over again for more Hydras. Don't forget that you can ping one, make a copy, and then ping the copy to make more copies. That way, you can make a ton of Phytohydras in one fell swoop. Want to draw a card? How about Illusory Ambusher? If your card only lets you shoot a creature, then target Stuffy Doll instead!

But the best targets are ones we just added from Ixalan and Rivals of Ixalan!

All six of these Angry Dinosaurs are great for this deck, from the flash-Fungusaur variant of Snapping Sailback to the Hornet Nest/Saber Ants token making of Overgrown Armasaur!

The best three are the land-making Ranging Raptors, the copying Polyraptor and the card drawing engine that is Ripjaw Raptor. All of those are amazing additions to our targets. Polyraptor wins games. The 6/6 doling out of tokens that copy your Polyraptor. It wins games, and like the Sprouting Phytohydra, you can target the new clones of your Polyraptor rather than the old one to prevent killing it. You can make a ton of dorks with these guys, and churning out lands or drawing a ton of cards all play well with what we are doing here. Don't sleep on these folks!

3. Engines. There are a smaller but valuable number of engines that push your deck powerfully that I want to unpack. For example, take Dismiss into Dream.

That's an amazing engine here. Every opposing dork is now an Illusion with the typical Illusion weakness of dying if targeted. Well guess what Prodigal Sorcerer does? That's right, it targets! Dismiss into Dream turns every junky card like Staff of Nin into an Avatar of Woe! That's a nasty engine. We have more! When you target someone's dork with Cowardice, it flees the battlefield! Note that this also is on your stuff as well, so you can bounce someone of yours about to die with a simple Prodigal Sorcerer tap.

I would consider Rite of Passage to also be more of an engine as it upgrades every creature of yours a target. They are all Fungusaurs! And other targets also keep their other effects, so a Saber Ants will make a 1/1 when shot and get +1/+1 as well with the Rite out.

I also consider the many deathtouch making equipment here to be an engine as well. Toss a Basilisk Collar on a Prodigal Sorcerer and watch as you kill people's creatures with a lot of poisonous magic. It gives your Tims range as they all can slay stuff. I tossed in three good deathtouch options as well to slay stuff.

You can also just lock down a dork with Neko-Te as well. You can shoot multiple creatures with Neko-Te and lock them all down as long as the equipment stays out. Note that you can equip Neko-Te to one creature, shoot something, then move it to another Tim, shoot something, and so forth, locking down a lot in a short time frame. It can also double the damage your Tims dole out to people.

Want to draw cards? Sure you do! We have auras like Curiosity, Keen Sense, and Snake Umbra that will draw you a card while you shoot someone for damage.

4. Untappers. Our fourth category of card that's pretty important are the untapping support I have here. It's one thing to tap a Zuran Spellcaster to shoot one of your targets for an effect. It's quite another to untap that Spellcaster and repeat it. Notching multiple triggers is the key to securing enough of these triggers to win the game.

I have a few obvious untappers to get us started, like Cacophodon or Kiora's Follower. Note that many of these will also target a dork so they can be used to kill or bounce something with Cowardice or Dismiss into Dream. You can use them for untapping something else too. Kiora's Follower, for example, could untap your Itlimoc, Cradle of the Sun or Simic Growth Chamber.

You can see some great all-untapping options too. Seedborn Muse? Murkfiend Liege? Quest for Renewal? All check! Thousand-Year Elixir has obvious value here too. But the best card here by far is the combo untapper that can win the game right there:

This is Intruder Alarm, and it's pretty good at winnings the game. It's very simple. Nobody's creatures untap ever. And then as any creature arrives to the party, everybody untaps again, even your foes. Do you see some combos in here to win the game?

Make a giant wall of Phytohydras and give yourself a ton of experience counters. Enter combat phase, swing with a giant game-winning beater. Maybe send it into a Rogue's Passage to ensure it hits.

There are a few other surprises in here as well. For example:

Will give you an arbitrarily large Cacophodon. You shoot your untapping enrage machine, put a +1/+1 counter on it, untap the shooter, and then keep going, making it bigger and bigger.

Even if you don't have infinite critters, a simple Saber Ants can untap your entire board twice. That's a lot more fun stuff, and you can tap your dorks to shoot players if you run out of targets to shoot and keep untapping. Intruder Alarm is awesome!

This is Statecraft. Why is it here? Perfect question! Note how your creatures can be a little outclassed by bigger and nastier stuff at the kitchen table? If you are unable to shoot them with deathtouching Prodigal Sorcerers or land a Dismiss into Dream, then this is also a great answer. Your entire team turns into Fog Banks. This will let you play defense long enough to win by tapping your Tims and killing people. Note that in a multiplayer game, this only shuts down your foe attacking into you, not each other. So if Bill attacks Bob, their stuff will hurt each other like normal. But if Bill attacks you, you'll just fluff into one another and nothing will happen and it's a wasted attack by Bill. It encourages folks to look elsewhere for combat-damage triggers and such. You can also use Rogue's Passage to slip a giant creature grown by Ezuri into a game-winning dork.

A few other cards to note. Asceticism is awesome as a way to encourage folks to stop looking at your stuff, and the regeneration from itself or Yavimaya Hollow are good at saving your dorks. The long game of Fool's Demise is strong with your other stuff. And we still have some space for removal and land fetching and similar tools to help your survive. Note that putting a Viridian Longbow on an Acidic Slime or Skullwinder is pretty cool from a backwards way of killing something permanently on the back of cards that people might think are here just for support but really have additional value to proffer.

All right, so let's take a few pics of my deck! 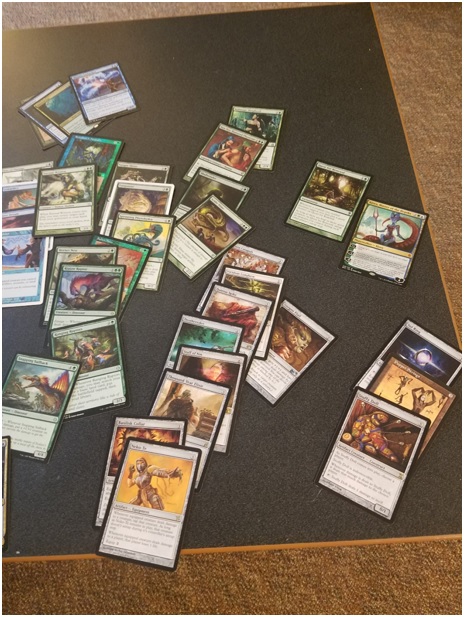 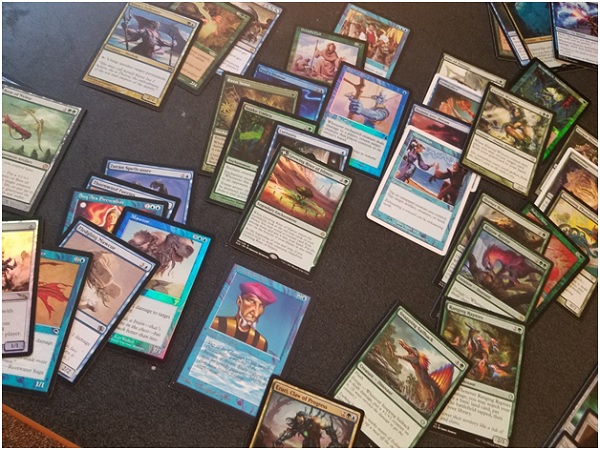 (Yes that's a white-bordered Fungusaur but a black-bordered original art Prodigal Sorcerer). My collection is weird like thatâ.â.â.â) What do you think of my new deck? Anything I should look to add to it?