Hello folks! I hope that you are having an amazing day today! Kaldheim is a deep set, right? Right! I've already done two Top Tens from the set but it's deep enough for a third! So, let's take a deep dive into another decade of talent at our latest set and see what else there is to see, okay?

As a reminder, these lists are with a casual kitchen table eye for Commander specifically and multiplayer generally and they will differ from Standard or Modern significantly.

We've come a long way from Suntail Hawk! The power of the one-drop flyer in White has ramped up a lot since then and this bad Raptor is the best we've seen thus far. First strike lets it take out any X/1 flyer out there and survive and it'll survive combat with a 1/1 as it's a 1/2 for one mana. There is nothing not to like here!

Another on curve flyer for White! I enjoy this 3/3 for three mana that can swing and block with the best of them! You don't even need to use the exiling to get value from the Marshal, but it helps. It obviously loves Warrior and Angel brews that share its own creature types, although it's fine in other tribal builds that find themselves with cards in the graveyard from the swinging like Soldiers or Clerics. We also went from common to mythic, in case you didn't notice. Next?

Fynn, the Fangbearer is a deathtouch lord, and what a leader! All deathtouchers are now dealing two poison counters each, which is a lot of poison counters! It's a nasty card that's legendary so you can easily build a Commander deck around Fynn that really wins quickly with the one-drops that trade up forcing foes into trading down or getting a lot of counters of the poison variety quickly. It can kill faster than Commander damage. According to Gatherer, there are 40 other mono-Green creatures with the ability, which is a nice starting point, from Acidic Slime to Wren's Run Vanquisher. Might I also suggest adding in infect and proliferate? I think that's a fun Deck-a-saurus Rex!

Hello fans of Demons, Berserkers, Group Slugs, Aristocrats and Goading. Love the value of Kardur, Doomscourge as the leader of a Commander deck! Force your foes to attack each other with an ETB goad and then when attackers inevitably die, you drain a life from your foes'. Note that this will work on your foes' attacking creatures as well as your own! This light life drain works well at the head of a Rakdos Group Slug deck that kills with triggers just like this one and you can sacrifice your attackers for value with Rakdos Sacrifice decks as well and slide it there. It's also fine in a deck that has foes with stuff by giving them away (Blim, Comedic Genius) or cards like Humble Defector. It has great value in a lot of places so get your Kardur on!

I am in serious Abe Love with Kaya. I talked about how awesome her first edition was for multiplayer generally and Commander specifically. Loved it to pieces! I also love her other entries into the planeswalker canon. I also adore her competence. There's nothing more attractive than a competent woman. My second favorite Avenger of all time is Captain Marvel, the Monica Rambeau version, and I love that she's in the MCU, and I had a crush on her as a boy in junior high at the time I was subscribing to the Avengers comic. Kaya reminds me of Monica - they are both very competent and have had to deal with some stuff. Love them both! Look at Kaya the Inexorable. Five mana for five loyalty, a +1 that provides card advantage and a -3 that destroys (in this case exiles) something is a common key planeswalker like Vivien Reid. She has a lot of value and I really enjoy what she brings to the kitchen table!!!

Hello fans of Vampiric Tutor and Imperial Seal! This bad Demon Rogue will let you Tutor once a turn for the best card from your library if you bring the heat with it. Did you so bring? Great! Spend two mana and Tutor up! A repeatable Tutor effect like this one doesn't see the light of day that often so use it and abuse it, just don't refuse it!

This fun Spirit...er...Warrior...er...Angel... is a fun snow card for the ages. It's worse than its obvious comparisons like Figure of Destiny as it doesn't grow as fast. It's great for snow decks and decks looking for a great mana sink. Note that you can keep on activating the final ability repeatedly and making it bigger. That's pretty saucy. It can win with enough mana over time. Ascend away my Spirit friend, ascend away!

Red is the color that breaks the color wheel the most. It has counters that are crazy fun like this and Mages' Contest. It can draw cards with Browbeat in pure style. Chaos Warp handles any permanent type, even enchantments. Add this fun counter to the list as well. But those breaks come with a disadvantage. Your foe can lose life and you won't counter or draw cards, it's in their hands, not yours. They may get a free permanent from Chaos Warp or a free spell with this Trickery of Tibalt. This card broke Constructed, but in multiplayer, giving a foe a free spell is less valuable and running a deck that breaks it in 100-card formats is unlikely, so it's value here is very different. You can still turn it on yourself if you are about to lose the game and see what happens...but it's hard to predict it without really warping your deck - doable in Modern, less so in Commander. It makes my third list. But it's still pretty saucy!

Our highest-charting common is this bad boy! Four mana, instant, scry 2, then draw two is a pretty standard set of abilities in Blue and this time around we can foretell the mana cost across two turns. Unlike some other foretells, this one doesn't wind up costing us extra mana so there's no real reason not to use it that way! The result is a powerful card for the masses! And a pretty powerful common as well for the deck building.

Hello fans of cards like Restoration Angel! This is an obvious callout. Restoration Angel is better, but don't sleep on this. The Angel would flicker a non-Angel and save something from removal or blink a key piece of enters-the-battlefield tech. That was pretty good and on-curve. The Protector can blink a lot of stuff - any creatures non-Angel you control! But the issue? They won't come back until after the Glorious Angelic One leaves play via bounce, exiling, tucking, or death. That means you can use it to save a team from removal like Day of Judgment or otherwise, but you cannot just blink one dork or save things in a small number and then get them back immediately. It's less flexible, but don't sleep on it. And it has foretell as well!

Outside of a dedicated snow deck, Graven Lore will just draw you three cards at instant speed, which is a bit behind the times. Inside of one? This is a nasty card-drawing engine, as you'll scry 5 and then get three cards for your trouble. Also don't ignore the fact that this is an instant and you can use it at the end of someone's turn after saving your mana for responses like removal and countermagic, and then you can tap and use this to break the game in your favor! Nasty! This is our highest charting non-God! 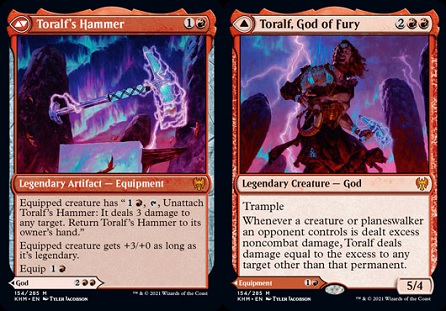 Do you like Thor? I hope so! You have this duo! Well....not really...the Hammer is just okay in casual land as it's a bit mana-intensive for the ability and requires tapping a dork. Meh. But Toralf proper? No "meh" here! Did something deal more damage than needed to kill a dork or a planeswalker? Awesome possum! Now send that extra damage somewhere else, like to a person. Drop a Flametongue Kavu, deal two damage to an Acidic Slime, kill it, and then deal two damage to its owner, or to another permanent. It's really good in Commander as a leader and can turn creature kill like Blasphemous Act into player kill. It's nasty. Welcome Thor! 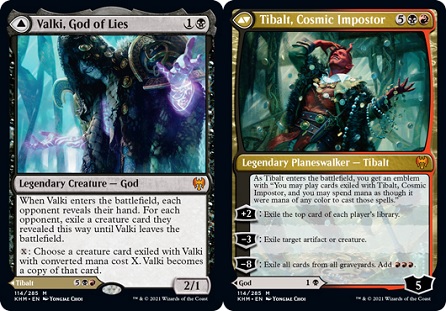 Valki, God of Lies is a fun leader of a Commander deck and counts as both Black and Red. You can drop him on the second turn reliably and then force your foes to reveal their hands, which is great info, and then exile creatures which you can copy with Valki's latter ability. Then you can cast your leader as the good Tibalt who broke formats like Modern with cascade. On arrival, you get the fun emblem and high loyalty, which can get better with the +2 and casting the stuff you exile. You can also exile a dork or an artifact with a -3 loyalty and cast it as well. It's flexible and fun! It's not as good in Commander as it's broken in other formats but it's not bad! Enjoy your Valki...er...Tibalt!

And there you have it! Anything in here that I missed? Anything that resonated with you?