Magic is not the same game now that it released as back in 1993. We all know that. It broke a lot of new ground.

Typically, when an game is released that creates a new sub-genre, things can initially look a little wonky. Sure, it sets the standard for everything that comes later, but those things that come later build off the first game in its genre as well, and learn from its mistakes. If the initial game canât keep up and change, then it often will lose the initial market share it had and die out.

Here are a few examples in Game-dom:

Dungeons and Dragons â The first RPG was clunky at times. And other books and additions to the game came along that made it chunkier with things such as the Comeliness stat. Then later editions began to arrive that simplified it and removed hard-to-understand mechanics like THAC0 and Armor Class. And then it began to re-rule RPGs again after suffering serious economic set backs in the late 80s and 90s.

Mage Knight â As the first collectable miniatures game, MK made a bunch of mistakes and one was being too much of a slave to the wargames genre, with the use of rulers, unit movement, and creation of places to play with pop cans and books and such. Other game systems came along and simplified that, making the game quicker with pre-made and gridded maps and such, and those did a lot better than MK. Even after modifying their rules late in the gameâs run, it wasnât enough, too little too late, and MK folded.

Magic: The Gathering â As the first collectible, well, anything in gaming, and the first CCG, MTG came with a lot of clunky rules and concepts, and it took a long time before most of those were weeded out. Many assumptions of the game and how players would react were off-balance considerably. But, MTG made a bunch of changes, and pushed to embrace the new best practices other games gave it, and that proved to be a strong set of additions to the game.

Mirage really solidified what Ice Age flirted with. A full-on expansion, with a block of sets to come that build off its mechanics. The flavor was intense, and you could do a lot with the Limited environment. I donât think itâs just random that the first time the game became truly draftable (In the Mirage Block era), was also the first time we had high-quality commons that werenât outclassed by higher rarity cards, as well as the first full Block. Cards like River Boa, Fireblast, Man-oâ-War, Empyreal Armor, Wall of Roots, and Granger Guildmage all had strong tournament and casual pedigrees. Meanwhile Pacifism, Dream Cache, Rampant Growth, Quirion Elves, and other cards first printed in Mirage became huge hits too. All commons! The great combination of flavor, mechanical connection, and a good draftable environment are all tied to the Block theme, that was added much later to the game, but itâs hard to imagine the game today without it.

I have to admit that I was a little âmehâ on this change, because it negatively impacted cards like Citadel of Pain (why keep lands untapped to get damage, Iâll just tap and draw mana and take no damage from it.) The biggest issue I had was that it removed an entire genre of decks. One old deck that worked under the old rules was a Red deck that ran stuff like Mana Flare to pump itâs mana up, and then had cards like Shivan Dragon, Rock Hydra, and Fireball to pump up, so it could always use itâs spare mana, but foes found it hard to use up all of the mana from their lands, so it worked nicely to deal some mana burn damage.

But cards have been printed since then that I think work quite nicely, and I have to admit that the rule has not been missed as much as might have been thought going into the change, which is nice. Good job everyone!

Mythic Rares are fun! Boom! I know you want to open up a special Mythic Rare today, right? The only issue with Mythics is that there has been a disconnect between what should be a Mythic and what shouldnât. Some cards make total sense as Mythics â they are big and splashy, like Planeswalkers, legendary creatures, big creatures like the Titans or Baneslayer Angel, and more. But how are Comet Storm, Monastery Mentor, or Deathmist Raptor Mythic? And we had this pushback from the community because the Mythics were supposed to be epic, legendary, Planeswalkers and not the best tournament cards from the set. Anyways, despite this speed bump, the introduction has been grand for the game, so welcome Mythics!

In the early game, developers didnât learn a critical game-developing rule. What is your mission critical identity as a game? What is your path to victory? What is your best-feeling moment in that game? For MTG, that is attacking with creatures and killing someone. But the early part of Magic saw the creation of a large number of cards that punished people for attacking, or prevented it altogether. Meekstone? Stasis? Moat? Maze of Ith? Island of Wak-Wak? Royal Assassin? Horn of Deafening? Singing Tree? Sorceress Queen? Al-Albara's Carpet? Island Sanctuary? Forcefield? Circles of Protection? Smoke? Caverns of Despair? The Tabernacle at Pendrell Vale? Veteran Bodyguard? You get the idea. The game was designed in such a way as to really hurt people that wanted to play and attack with creatures. It took a while, but eventually WotC realized that they had to push creature combat again, because that was mission critical. And today, the game runs a lot smoother as a result.

6. Removal of Mono vs Poly vs Continuous Artifacts

As designed, artifacts with activation costs were divided into Mono and Poly types, which acted differently. We also had the Continuous type as well. Here, let me show you:

Compare these two. How do you know whether or not you can activate Rod of Ruin multiple times or just once? Well, itâs listed as a âMono Artifact.â That means it can just be used once. But Rocket Launcher is the Poly type, so it can be activated multiple times in a turn. Thatâs just confusing. Early Magic often had hidden rules knowledge in its subtypes, like Walls cannot attack. But this was overly complex, especially since we had the âTap to use itâ technology already in the game. Getting rid of this stuff is pretty key to simplifying the cards.

This is the most boring thing on todayâs list. It doesnât seem like a big deal. But the wording of cards didnât use to be consistent. And arguments happened at kitchen tables about it. Hereâs one example: 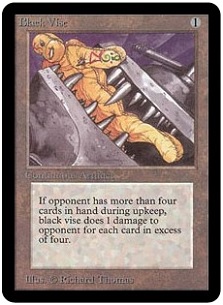 This is the original wording of Black Vise:

If opponent has more than four cards in hand during upkeep , black vise does 1 damage to opponent for each card in excess of four .

Iâm sure you can see the issue. What do I do against more than one foe in multiplayer? Does Black Vise work on just one opponent or all of them? itâs not grammatically correct either way. âEach opponent?â âTarget opponent?â If you just pluralized âopponentâ it would help, but this badly worded card meant it could go either way. Today, Magic has been codified, and the language makes sense for multiple situations. There are many examples of this issue in the early days of the game. And now they are all cleared up!

Shiny cards are awesome! Getting a chance to crack a foil or other pretty card is a really cool experience. Making judge promos and awards shiny is a different take than the old âalternate artâ variants youâd get of cards like Incinerate and Disenchant before foils became a major part of the fabric of MTG. And weâve seen foils used heavily to push new product, from the all-foil decks like Graveborn to the all-foil features like From the Vault: Annihilation. They are leading the Masterpiece series an used to heighten various casual-only sets. Foils are really fun! And Iâm sure weâre all glad they were added to the fabric of the game.

The Damage Prevention Step was, arguably, one of the most wonky rules that MTG shipped with. Itâs just crazy to think about it. Iâd put it up there with protection and banding for the biggest subset of rules baggage that came with it. And the odd thing was that it gave you little additional strategy to use. Only a few handfuls of weird corner cases ever cared about it or were enhanced by it, but it added a big length to the game and its core rules. I never met anyone who liked it, and when these rules left, I donât remember anyone shedding any tears either. But itâs obvious-removal status keep it from clocking higher, as opposed toâ.â.â.â

In retrospect, Iâm not sure why we even wanted Interrupts. There was nothing Interrupts did that an Instant wouldnât also do. So if I cast a spell, only Counterspell and friends, Laces, Slight of Mind and similar effects, mana making (Dark Ritual) and the Blasts (such as Blue Elemental Blast) could be cast. But why? That made no sense. Better to have everything be Instants and just do away with the whole thing.

All of the previous changes to this list were done in order to make the game smoother, easier to read, or for consistency. Simplifying game rules, adding new ways to collect the game, and more. So good for that! But this one was about information that should always have been with the game, but was missing. You see, for the first few years of the game, there was no central clearinghouse a person could easily check to see what cards they opened in a pack were rare. Itâs not like the position of the rares were guaranteed either. I canât tell you how many Revised boosters I opened with the rare anywhere from the 4th spot down to the last spot in the pack. There was no consistency from one pack to another. So you had to just memorize the valuable rares, which was no help when you opened a card you hadnât seen, or were opening cards from a new set. The number of trade sharks who would take advantage of this uneven knowledge base was obscene. I canât tell you how many new players, young kids, casual players who played little, and so forth were bilked out of rare dual lands or other rares that looked minor at first, in order to trade them Craw Wurms or other low value commons that seemed more than they were. The fact that it took them as long as they did, when we all knew the various issues, was not good for the game, and the color-coded set symbols were the single most important change to the game, because they shut down a lot of unfair trading practices, put everyone on the same page, and removed the requirement to carry a Scry magazine around with me so I could check the rarity of every card in print. (Today thatâd be a smart phone, but still, it prevents you having to do any of that.) This is the best change WotC made to the game!

And there we go! Without these changes, Iâm not sure that Magic would feel, well, like Magic, today. Yay for these and more changes that happened during the halcyon days of yore. As shipped, MTG was awesome, but there was a lot of space to improve it too, and Iâm glad the game didnât go the way of Mage Knight or hold onto the same problems for as long as D&D.