I hope you are having an awesome-tastic Monday! Today I wanted to really drill down into Commander and all things Unstable. Do they matchup well? Are they two things that go together well? Letâs look at the full spoiler and see!

Letâs begin by taking a look at this cardâ.â.â.â 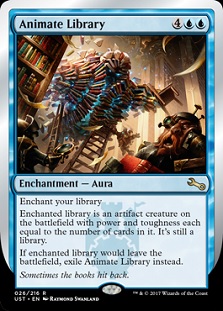 Check that thing out! The first thing I saw when I read the spoiler for Animate Library was about how awesome it would be combined with Battle of Wits as another enchantment-based win condition. And then the 2nd thought was about how great itâd be in Commander! And then my third thought was that it was really sad that every silver-bordered card has to be banned in Commanderâ.â.â.â

A lot of silver-bordered cards from Unstable are not doing much work beyond what you would expect for limited or suchâ.â.â.â

Beast in Show is literally a Beast version of Yavimaya Wurm. Thereâs no mechanical or flavor-based reason to ban Beast in Show. Shoot, there is no part of Amateur Auteur that could not be printed, as is, in black border. There is no over-kill joke in the name, creature type, casting cost, art, or even flavor text. You could print it in Commander 2018 without any getting upset. Itâs a virtual reprint of a number of cards that do the same thing, such as Ronom Unicorn. So why ban cards like these when you donât need to?

I could literally take a black sharpie to the edges, make some of these cards black border, and no one would either notice or really care. So why ban them?

And thatâs the rub, I suppose.

Whatâs the point of a Banned List? Well, for me, you should enable players to play the maximum number of cards they want to and still have a fun and compelling environment that speaks to the heart of what the format is. Vintage bans Contract from Below because itâs not a format where ante is legal, and Shahrazad because it takes too long to run in most tournaments and doesnât play well because of it. Similarly, Masques Block banned Lin Sivvi, Defiant Hero because our good Rebel Leader was just too onerous for the format to allow.

There is an easy way to do a Banned List that simply says, â only Vintage legal cards,â and then leaves it as is. We did the same with Five Color back when I was on the Ruling Council because we were able to simplify a huge B&R list. If you legalized silver-bordered sets and cards, you would then have to deal with banning more cards, like Mox Lotus or perhaps Once More With Feeling that would add to the difficulty of the list. For example, having someone run Look at Me, I'm the DCI and then banning your Commander is an anathema to the core concept of the format. As a result, Commander simply has to leave the decision to local groups. Want to run Unstable? Great! Then run Unstable! I donât think there are a lot of cards in the set that feel like they would be overly problematic in a Commander world.

And while older sets require too many moving parts for not enough reward, the latest set is different. This is more of a set designed to be played for some time. The Augment and Host creatures, for example, are a mechanic that seems very deep and could easily make the cut in a black-bordered set, much like split cards and other cards like that have done so. Itâs my favorite mechanic from the set, and itâs precisely the sort of value, deep-digging, and quality card that can really help a board out.

I know a lot of Minotaur decks want some cheaper options to run, so now you have Target Minotaur, a card that could literally have a name changed to Minotaur Decoy or Minotaur Scout and still be useful. Similarly, Really Epic Punch is a combination of Savage Punch and Epic Confrontation, both cards from Tarkir Block that featured Surrak face punching a Bear or Dragon, respectively. Here the Bear-Dragon combo wins, and thatâs funny. Even the flavor text is precisely like the flavor text of normal cards, like Werebear, (âHe exercises his right to bear arms.â). No part of that card is not something you could run in Commander.

What are the most powerful cards running around for Commander? Animate Library? Or maybe some of these?

Consider Very Cryptic Command. Itâs still a great card! But no part is as annoying as the card drawing and/or countering of the first one. Here, you can use this as a Winds of Change, not card advantage, or a tap, untap machine, or to recur an instant/sorcery. All have value, sure, but itâs not as onerous as its parent. Meanwhile, a card like The Grand Calcutron might look rough at first, but really shuts down a lot of junk. Itâs going to be hard to be an annoying counter-deck and this is a great tool to deal with people that want to hoard cards and then counter all of your stuff rather than cast them and play the game.

With the full spoiler out, you can see that there donât seem to be any major snares. Cards that might otherwise have been broken have enough breaks on them to prevent issues. Teacher's Pet is a good example. You might have thought of this card in the same dominating board space as Stonehewer Giant that fetches an equipment into play repeatedly, but this Pet sacrifices itself when tossing out a Host or Augment creature. Even a crazy card like Five-Finger Discount, which lacks the key âyou ownâ clause (thereby enabling to you to bounce another nonland to your own hand) is fun. The nastiest thing I can think of would be to try and bounce an opposing Commander to your hand, and not cast it. But zone-changing like this still lets something head to the Command Zone, so it wonât work. (See also Spy Eye, another in the, âGetting cards from other players into your hand mechanic.â).

Are Infinity Elemental (or even Animate Library) a problem? Without any evasive abilities, nothing differentiates it and a Commander with a 21+ power. Infinity Elemental is basically a Red Phage, the Untouchable. It you hit an opponent, youâll kill them, but it costs a lot to get out, and everything from Maze of Ith to Swords to Plowshares to Typhoid Rats to Control Magic will handle it. Itâs burn-able and kill-able. And Animate Library is even more fragile as both an enchantment and creature. Note that you can kill a player by targeting their Infinity Elemental/Animate Library with Delirium or Backlash or using something like Mirror Strike or Reverse Damage. No matter your colors, you always have an out available.

These cards arenât Look at Me, I'm the DCI or Once More With Feeling or even Mox Lotus and Gleemax. There are no traps here.

But there are a lot of wins from the set for Commander. Letâs look into a few examples of cards that I think are especially good in Commander:

These two cards are great fun as leaders for a potential Commander deck. Ol' Buzzbark is a great card that evokes old school flavor. Youâll get a solid 3/3 for 2 mana if you donât want to bother with X cost. And when you do, you can start dropping those mad dice onto the table, and they either pump your stuff or damage opposing stuff with equanimity. Hey, whatever happens, happens. Drop some dice and have some fun.

And then Grusilda plays into a powerful and obvious space for Magic. Hearkening back to mythology when two or more animals were used to create a third (such as Centaur or Griffon), we have a history of combining two into one. We have epic fantasy and Gary Gygax that similarly played into this space with Owlbears among many other creatures. Grusilda does the same, and feels very Innistrad in doing so. Here she can combine any other creatures from any graveyards (not just your own!) that have a little spice attached. Getting bonus power/toughness and abilities is just awesome. I really want to combine two legendary creatures that are different versions of each other, such as Akroma, Angel of Fury and Akroma, Angel of Wrath or Mirri, Cat Warrior and Mirri the Cursed. Thatâs awesome! You can find a ton of stuff to Grusilda. 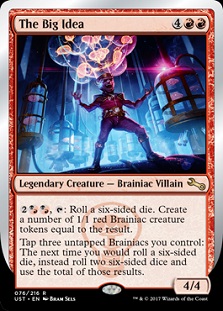 How about The Big Idea? We all love a little Brainiac Villain at times, right? Toss some dice, make some dorks, and then tap them and make a lot more dorks. Everyone wins! And you can toss in flavorful cards like Brain in a Jar for prime usage. Who has The Big Idea? This one does!

And there are a ton of other cards in the YAY COMMANDER genre of card that was made for Unstableâ.â.â.â

Lots of fun stuff! If Earl of Squirrel, Summon the Pack or Everythingamajig arenât hitting you in the deep dark corners of your Magic love, then I donât know whatâs happening!

Thatâs my biggest frustration. No ISoISoISoE!

After taking a deep look at the set, it feels very much like it wouldnât break anything at the kitchen table. I am inclined to allow Unstable-only at my kitchen table (and non-broken cards that someone might want to run are typically fine as well, like Snow Mercy or Blast from the Past).

What do you think about the set in Commander? What will your playgroup allow, if anything?

Tomorrow I want to count down the Top Ten Cards from the set, and next week build some Unstable decks for you. I really want to talk about this set for a long time, as I have a lot to delve into with this being a casual-only set and Iâm pretty much a casual-only player. Last week I went to the SCG Tour here in Baltimore about fifteen minutes away and I just played Commander. Thatâs who I be. And yet, we are about to hit the next few sets pretty quickly, so I wanted to put a lot in here. For you.