I wasnât quite sure what to expect when Arena of the Planeswalkers was announced during Pro Tour Khans of Tarkir and then demoed, as a production prototype, at Essen Spiel last year. Tactical strategy intrigues me, and board gaming in general has grown on me in the past few years. Magic is, undoubtedly and in my humble opinion, the greatest game on the planet, but there are plenty of other great ones to know, too. The allure of adding Magicâs magic to non-card games is almost as old as the game itself, and Iâve experienced plenty of those attempts in the past.

History hasnât been kind when Magic has mixed with anything else, particularly with tactical strategy.

However, itâs only been software and video games that have had the Magic treatment. For the first time, the physical game would be blended with another physical game, and the underlying system is one I already appreciated: Heroscape, something that still gets fans excited at Gen Con. In college, I had several friends who pooled resources to go all-in on the game, making it possible to build battlefields that covered a pool table and play games featuring six or more players.

Angus Walker, Brand and Marketing Director at Hasbro, was on hand at Gen Con to share the game, and he shared some additional information afterward by e-mail. âHasbro designer Craig Van Ness contributed to both Heroscape and the Arena of the Planeswalkers game, so the comparison makes a lot of sense,â Angus said. âIn fact, the Magic: The Gathering Arena of the Planeswalkers terrain is even compatible with the Heroscape terrain, but the gameplay is not. The characters, the number of turns involved during gameplay, and a variety of scenarios differ between Heroscape and Arena of the Planeswalkers. Perhaps the most noticeable difference, however, is the playersâ ability to cast spells that dramatically change the mechanic of the game.â

Nostalgia for good fun is hard to shake, and it blended well with the spells of Magic.

I was sent a complimentary review copy immediately before Gen Con.

At Gen Con, I had the chance to play with a few friends, and I collaborated with Rich Castle on an episode of Inside the Deck dedicated to the game.

(Adam) @richardfcastle is working hard to get the inside scoop on Arena of the Planeswalkers at #gencon2015. pic.twitter.com/cAEj7c5mUb

(Adam) Giving Arena of the Planeswalkers a try. Gideon's Rhox guys suited up enchantments to beat my Elementals up. pic.twitter.com/L10U76OzYg

(Adam) Meanwhile, Jace rolled this. It was an attack. We laughed. pic.twitter.com/HvdXl5hUAI

(Adam) Jace unloaded on Gideon, killing him in one turn, then had Aetherspouts for the Hookmaster counter to Jace. pic.twitter.com/DnUsQQR00C

(Adam) Jace came around the corner with Unsummon to corner me. Empty battlefield, as blue intended. pic.twitter.com/9dLXUprmqV

If you want a taste of what itâs about, the video and tweets will have you covered. Spoiler alert: Itâs a fun game that I couldnât wait to play back home, too. 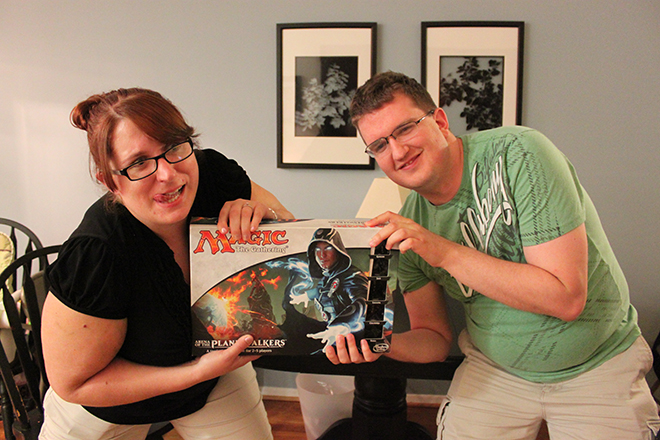 Alexis and Zak were a little too keen to enjoy the game again after we finished our play through and interview.

Dropped by (planeswalked to?) @the_stybs' lair during his review of #MTG Arena Of The Planeswalkers. pic.twitter.com/aCPXWCebMu

Alexis and Zak werenât random choices to help me dig into the game either: Both love Magic as competitive players and enjoy a healthy dose of board games regularly. Mixing the two together to satisfy both the love of Magic and board gaming is the challenge for Hasbro here.

And I think theyâve sown the seeds of a great game.

The out-of-the box game is complete. With five characters, with different armies and abilities to use, the game feels varied. Unlike games in which every characters is balanced, with perhaps minor differences in niche abilities to play, Arena of the Planeswalkers feels like Magic. Thereâs a metagame between the characters and squads. Abilities that feel broken in one situation are useless in another, even if they donât always seem to harmonize.

âMy deck didnât feel like it fit with Chandra,â Alexis said. âA lot of my starting spells dealt direct damage to many units but required damage to be on them to do it. My units were really fragile, so I couldnât use themâexcept Chandra.â

âOnce it gets started, itâs fine, but the strengths and weakness of each character you need to know before you start,â Zak added. âYou need to know that coming in.â

For more competitive players, the wildly different abilities risk feeling good, but in practice, it wasnât the case. Both at Gen Con and around my kitchen table, the interplay of abilities and multiplayer felt good. Surpriseâfrom being unfamiliar with the gamesâwas high, but the payoff for the unexpected turn of a die roll meant randomness factored in regardless of the advantages or disadvantages of characters. 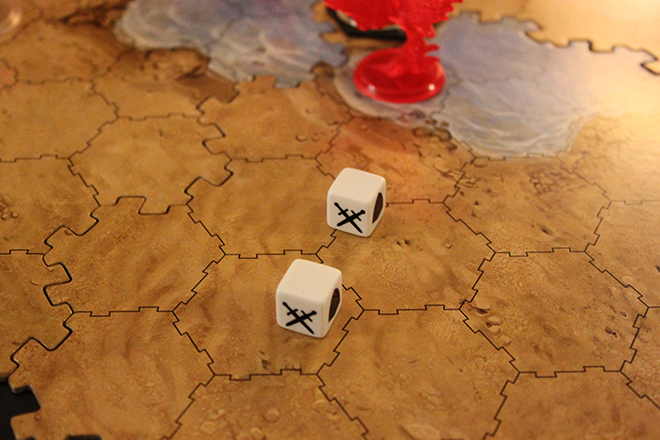 Dice matter in Arena of the Planeswalkers, and their randomness is the biggest element of variance affecting things.

âThe randomness of combat is the biggest thing. Itâs just an inherent function of having dice: Itâs another thing you have to understand coming in,â Zack said. âIf you like games where you have to play perfectly and donât like dice, this isnât for you.â 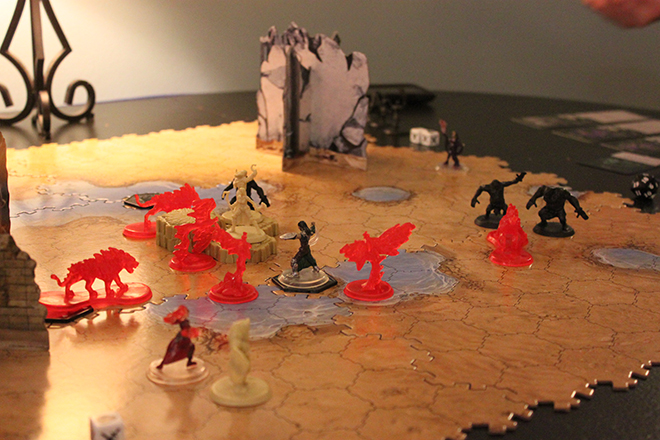 A cluttered battlefield where Gideon and Chandraâs Phoenixes are locked together in an engagement.

Playing imperfectly felt good in Arena of the Planeswalkers. Sometimes, âmistakesâ turned out to be happy accidents: Getting Gideon fenced in my 1-Life creatures meant both Gideon and the Phoenixes couldnât move freely thanks to the engagement rules. It was a coin toss whether moving a Phoenix away would result in it being struck down instead.

Being pinned down was beneficial at the end of the game when moving away or attacking Gideon meant almost certain doom for Chandraâs last troops. 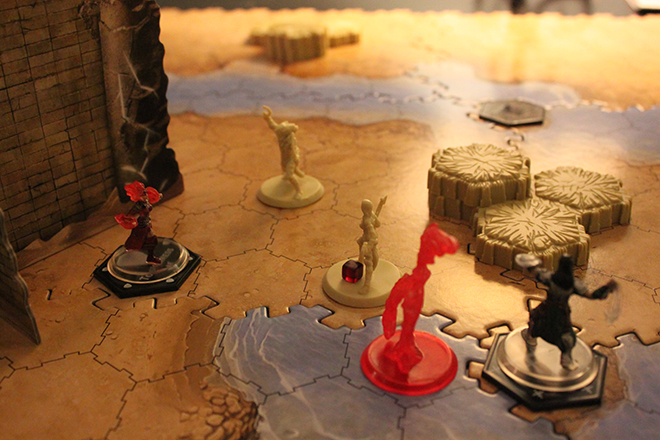 Multiplayer Magic is more complicated than duels. While I was afraid that ignoring the scenarios provided in the rulebook would lead to disappointing gameplay, we found the opposite to the true: The rules are well-designed and polished.

âI enjoyed how smoothly the game played. There wasnât a lot of upkeep and rules,â Alexis said. âYou didnât get bogged down with the start of the game. It eased very quickly into gameplay. It still had a lot of intelligent plays that needed to be made. It requires some forethought: You didnât just want to dump your hand on the table, but it also seemed a little bit more fun. It was more fun in the sense that it was more interactive than a typical three-player [Magic] game. It was even on levelâwe werenât just picking on one person.â 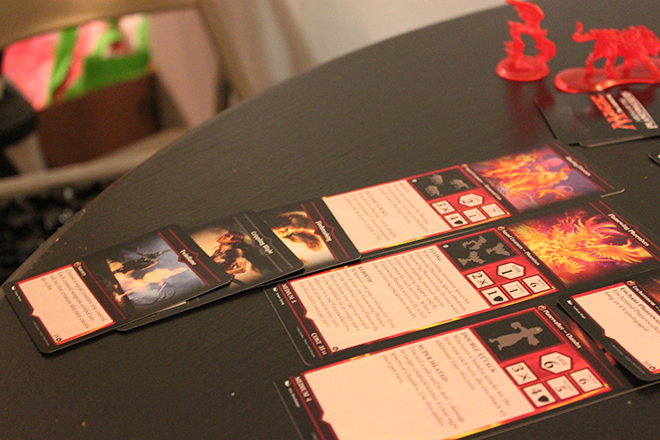 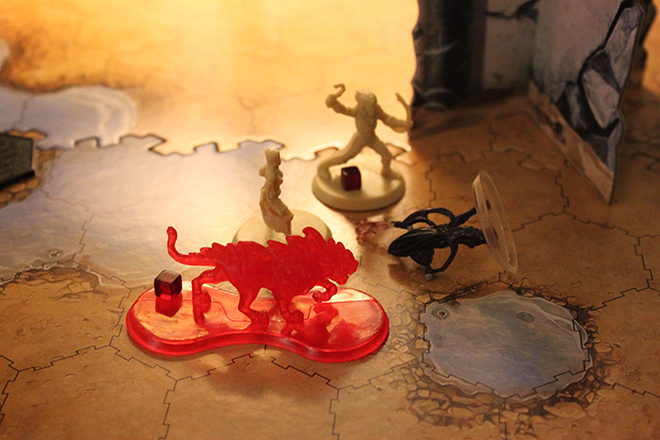 Liliana was hit by a one-two rush of both Gideonâs Hookmasters and a beefed-up Firecat from Chandra. It was a surprise twist the turned the game on its head.

Zak, the first player out, had some time to watch how the battle between Chandra and Gideon unfolded. âThe combat doesnât feel like Magic. It feels a lot less tactical; the movement feels more tactical. The spell casting feels very Magic-like for sure, and the Planeswalkersâ unique abilities feel good.â

âI liked that every Planeswalker plays differently and has its own strengths and weaknesses,â Zak added. âLiliana has good range and abilities but low defense, while Gideon has high defense but can only attack right next to it. Then, the creatures bear that out for each player.â

The rules and gameplay smoothness between three players was impressive. âI expected it to be really long, drawn out, and boring, similar to other adaptations of other things Iâve tried previously,â Alexis said. âFirefly: The Game, and like Fluxx: The Board Game.â

âI think it has a lot of potential,â Zak said. âBy itself, just the base set, it feels a little bit limited. By itself, itâs going to grow stale pretty quickly since there isnât a lot of variation in it, but once expansions start coming out, it should be a very strong game.â

Zak, like others I talked to about the game, had already pre-ordered it through CoolStuffInc.com and other places before this yearâs PAX promised to reveal the expansions coming in January 2016. âThis expansion adds new Planeswalkers, creatures, and spells for players to supercharge their games, and it requires the core Arena of the Planeswalkers game. More details will be revealed at PAX Prime at the end of August,â Angus shared by e-mail.

With days of demos and explaining at Gen Con, Angus had perhaps the best sound bite to sum up the game for Magic players:

Although there are Magic references throughout the game, the play pattern and design allows for gamers of all levels and interests to enjoy Arena of the Planeswalkers. Thereâs no Magic experience required, so newcomers can easily join the game while the designs, spells, and strategy will also resonate with those familiar with Magic. It was great to receive such positive feedback at Gen Con from those who were able to demo the game on-site, and we feel that itâs not just a great entry point for those interested in Magic, but an incredible strategy game that many can excel at. Another great benefit of the game is that Arena of the Planeswalkers is a complete, standalone game. Players can have a rich gaming experience right out of the box.

Magic is tough to teach and takes full-time dedication to master. While Arena of the Planeswalkers may be as rich and deep over time, itâs an easy-to-pick-up way to celebrate Magic in a game that can stand alone.

My daughter will be able to play this, with its physical pieces and actions, before having the knack to build a Sealed deck to duel me.

Iâm particular about my board games. Popular mechanics, such as social engineering and interactions, wagering, deception, and bluffing, like in Coup and Codenames, arenât as appealing to me as worker placement, like in Champions of Midgard or Agricola. Arena of the Planeswalkers is a miniatures game that makes me feel more that my decisions matter than that the cleverness of my social engineering does.