Last week, I talked about rogue decks and how I had been brainstorming with Zac Elsik on Nexus of Fate decks. Later that night after writing the article, I got first 5-0 with one of those decks, a Bant deck patterned after the Sifter Wurm decks that had been making the rounds.

The first stage of what I'd been working on was a desire to make the deck into a Teferi, Hero of Dominaria deck -- Teferi can mean with a mere five lands you can take over a game with taking turns with Time Walk effects from Nexus of Fate. Bant was just one of the potential ways to build the deck, but it seems to make sense to run the Green ramp spells to build to a 7-mana spell, Nexus of Fate being a "replacement" for Sifter Wurm.

Here is that first 5-0 deck. Since then, I've had two "virtual" 5-0s (finishes that would have been 5-0, but I timed out with the match win in hand) and at least one other player has finished 5-0 as well.

This version of the deck is awesome.

It is also worst than current versions, I think.

A big part of the small mistake that I made was running zero copies of Gift of Paradise in the ramp spells. Gift of Paradise is basically the perfect ramp spell for this deck. Staying alive is important and the three life boost matters a lot. But, most dramatically, Gift of Paradise is incredible in conjunction with Teferi, Hero of Dominaria. Being able to untap a land that makes multiple mana is huge.

Take a gander at this turn five: 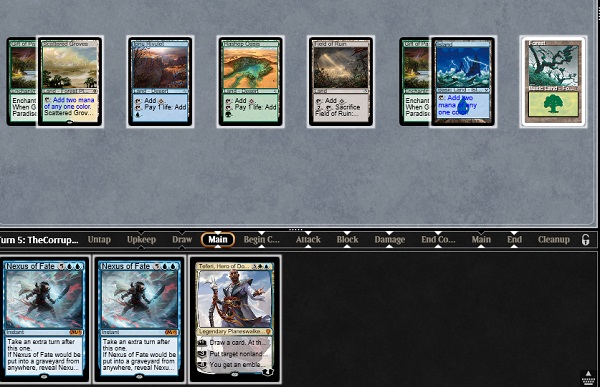 While this is perhaps as dramatic as it can be, starting on Turn Five, my opponent never took another turn. This would have been impossible with "mere" sorcery-based ramp.

Also important, though, is that Gift of Paradise makes late-game game states with this deck much more strong. Because Gift of Paradise takes itself out of the deck (even if it does leave land in the deck), this means that after a Memory from Commit // Memory, you are less likely to draw minor ramp. Especially important in the late game, not only are you less likely to draw "bad" ramp that can't find any lands at all, but you get to improve your mana base with less basic lands. Finally, Gift of Paradise all by itself fixes your color needs -- albeit at the risk of going away because of a Thrashing Brontodon or Blink of an Eye.

In terms of spells, the rest of the deck has largely stayed the same. Teferi, Hero of Dominaria, Fumigate, Seal Away, Settle the Wreckage, and Commit all help keep you alive, with Thaumatic Compass serving double-duty as both a means to stay alive and as a ramp spell of sorts. Hour of Promise is another double-duty card, both ramping up the mana and supplying a win condition in the late game with either Zombies or Hostile Desert.

The real beauty of this deck is in its unity. Basically the entirety of the deck is either a card to answer a threat, mana and mana ramp, or card draw/Nexus of Fate. Many cards are actually two of the above categories at the same time, and Teferi, Hero of Dominaria is all three.

The sideboard to the deck is always in flux, and given the way that Sai Storm seems to be on the rise, most likely, that above sideboard is partly archaic. That's okay, though, because since adding in Gift of Paradise, the deck needs an overhaul in other ways as well.

Aside from the changing around of Gift of Paradise, the strange counts of Grow from the Ashes and Spring // Mind also bears some mentioning. While ideally, I'd love to be running eight small ramp spells, realistically, there is just only so much real estate. While I experimented with six, seven seemed to be the right number, especially after conferring with Zac Elsik and Jody Keith. This might mean that it would be easy to continue using all three Spring // Mind, but I'd found that I was very rarely using Mind at three copies and that Grow from the Ashes was a very valuable card in the deck. However, I absolutely knew I wanted two Mind in the deck. This left only enough room for a single Grow from the Ashes. All of this meant that there could be a decrease in basic lands.

The mana counts on this new deck are the most dramatically improved aspect of the deck. Not counting the improvements from the targets of the mana-ramp nor the ability of Gift of Paradise to solve all the needs of the deck from a color perspective, taking Green, White, and Blue sources from 13, 11, and 6, respectively to 14, 12, and 7, respectively. Unstable mana is one of the big ways that this deck can beat itself, so this is a big deal.

Adding in Search for Azcanta was another big improvement. The deck absolutely wants a first Search for Azcanta. For that matter, it probably also wants a second. However, I've just found there to be too much value from Thaumatic Compass turning into Spires of Orazca. Even know I still want another Spires of Orazca in the deck, but just can't really figure out a way to fit it in.

One of the most difficult things about the deck to recognize is how to use your mana efficiently, not just in terms of numbers but also in terms of colors. I've certainly lost games online because I wasn't as efficient as I could have been, and as a result, as a single card draw away from winning the game. Teferi, Hero of Dominaria is a part of the strangeness of figuring things out properly, because the oddity of being able to cast Nexus of Fate as an instant can mean that you'll be able to use Teferi's untap to good affect at the end of a turn, which can mean that you could cast one of the many 5-drops in the deck and Nexus of Fate at a mere ten lands -- but this is actually doable at even less lands depending on the number of Gift of Paradise that you have!

Currently, I'm not running Sorcerous Spyglass, but the longer I've played without it, the more that I think I may want it. Unfortunately, the sideboard options are so wide open, I'd be running forty cards if I could. By way of example, here is a short list of the cards I'd be considering that aren't in the most recent list:

All told, this deck is an utter blast. If you're worried that you won't be able to play it online, Wizards has heard you.

This is Pro Tour 25th Anniversary Weekend and Gen Con is happening as well. I won't be at either, but I still have a strong feeling about the game that I want to share with you:

What a great time to be playing Magic!