You mustâve heard of it. Those whisperings in woods, that strange gibbering on Twitter that almost at sounds like human language. Well, Iâm here to tell you the myth is real.

Real awesome, that is.

Nothing says good science like creating a dinosaur from nothing. And then taking that dinosaur and consuming it from the inside out to unleash cosmic horror.

Iâve played about seventy practice games with variants of this deck, and Iâm not ashamed! In this article, Iâll be giving a critical assessment of the viability of Allosaurus Evolution in Modern as well as offering alternative strategies, but first letâs savor the moment. Put on your cowboy hat (over your elf ears), jump on your dinosaur, and ride it straight to the Helvault.

If you tell me of anything better in life than evolving your dinosaur into Griselbrand by turn two, then Iâm calling you a liar. This is Modern, and turn-two legendary demons are about the best you can do. Or, in a pinch, summon a praetor, and toast your opponentâs demise with Phyrexian oil.

Thatâs not just a best-case scenario. Itâs a super-cali-fragilicitics-expealidocious scenario. The next question is, how does the deck function when itâs not winning? I mean, when it doesnât have that two-card combo that has apparently no consistency. Because sometimes in the mid game my hand may consist of one Griselbrand, one Allosaurus Rider, and no hope.

Or so I first assumed. Without the combo, the dinosaur feels like it would be a three-for-one present waiting for my opponent to unwrap. Sometimes thatâs true, but it plays better than that. 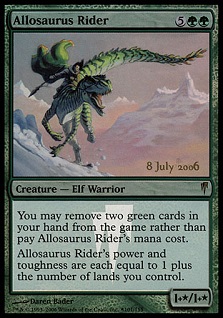 Not all games in Modern are about card advantage. When tempo is key, sometimes the right play is to discard two cards on the second turn to spontaneously generate a 3/3, with the chance of growing it to a 4/4 attacker next turn. Combine that with summoning a Kitchen Finks at the same time, and you have a real attack force.

And what about the games when the Burn opponent is hitting me with Goblin Guide and has just cast Eidolon of the Great Revel? A free 3/3 (or even 2/2) that doesnât damage me is just the dinosaur I ordered.

In one stalled game I even searched for Allosaurus Rider off Fauna Shaman, tapped seven lands, and cast it as an 8/8. Then I did the same thing next turn.

Speaking of Fauna Shaman, the deck has more consistency than at first glance. The shaman allows us to discard huge creatures we canât cast, find the silver bullets we need, and fill our graveyard for our favorite ape.

Turns out, delve creatures evolve real well. Casting Eldritch Evolution on Hooting Mandrills earns us the cosmic horror we deserve. In an average case, weâre casting the ape for 3 mana, including the cost of Commune with the Gods. Thatâs not a bad rate for a 4/4 trampler, and even without the combo, a monkey or two will often drub the opponent into submission.

Commune with the Gods is another way to search for the critical creatures in any given matchup. One last perk is that it may send an Eldritch Evolution to the graveyard. From there we can rescue our key sorcery with Eternal Witness.

Value creatures such as Eternal Witness, Kitchen Finks, (and Reclamation Sage) play well with Eldritch Evolution. After their enter-the-battlefield triggers, we can sacrifice their used-up-husks of bodies for something better.

Our mid-tier search targets will often close out games by themselves. The angel is better against control or midrange decks, with Thragtusk being preferred against aggro. But you canât really go wrong your angel or beast. Best part? Theyâre not hard to hard cast.

Below them is our hate-bear tier. We can often search these up by sacrificing an elf or a Dryad Arbor. (Speaking of mana dorks; play all the Noble Hierarch you have.) If slapped down early enough, these silver bullets can win games by themselves. Here they are with an example strategy they can hose.

And, out of the sideboard:

Youâll notice some larger creatures in the sideboard, such as Empyrial Archangel (vs Burn but mostly just for lolâs) and Sundering Titan (vs combo, control). Theyâre for when Elesh Norn, Grand Cenobite isnât at her best. You may note the absence of Iona, Shield of Emeria, mainly because she canât burst out of the chest of Hooting Mandrills.

Multiple other sideboard slots are dedicated to midrange creatures. When facing an attrition matchup (on the draw) itâs often correct to side out three of the Allosaurus Rider for old standbys like Obstinate Baloth.

The deck plays like midrange with an extreme combo element, sort of a Wild-Wild-West Birthing Pod deck. Opponents will often prepare for the combo only to be apeâd to death. Or, worst of all, devoured by 4/4 dinosaurs. And by worst of all, I of course mean best of all.

But just how good is the deck? Tier two, I would say, with a win rate of about fifty percent for this first-blush version, and well worth playing for the hilarity. For those who prefer more consistency than dinosaur riding, there is a version that only uses delve creatures. It sacrifices the turn-two madness for turn three-point-seven dependability.

This may be the stronger deck. It plays out much like the Hooting Mandrills half of Allosaurus Evolution. The strategy depends more on the graveyard, but the most-played hate card is Grafdigger's Cage. Side in an extra Reclamation Sage in most matchups in anticipation of this. Or just ignore the hate by delving your graveyard away anyway and kill them with apes and sadists. Or better yet, sadistic apes.

I have also seen lists that eschew dinosaurs and delve creatures altogether. They have no greater aspirations than searching for Restoration Angel or Kiki-Jiki, Mirror Breaker and winning the game. Pah! Whereâs the fun in that?

The bottom line is Eldritch Evolution is good clean fun that definitely maybe wonât get banned in Modern. It should be tried in every toolbox deck. As a counterpoint to Collected Company, it encourages more silver bullets and five-drop menaces.

And this is only the first brochure for the cosmic-horror-dinosaur-theme park. What strategies are you testing? What creatures do you aspire to search up? Donât be shy. Weâre all mad here.