Pauper is lousy with Artifact synergies. Two of the current best performing decks both lean heavily on the card type to enable their game plans. Drawing from both Mirrodin and Scars of Mirrodin block these two decks were licking their proverbial chops for Kaladesh and the potential for more toys.

Affinity makes use of its namesake mechanic to power out threats. Frogmite, Myr Enforcer, and Thoughtcast are the common inclusions that bear the keyword while Gearseeker Serpent has the ability in everything but name. The deck also leans on Metalcraft for Carapace Forger and Galvanic Blast. Pauper Affinity is one of the clocks of the format representing a deck that can apply pressure early and often while also providing a combo finish with Atog and Fling.

Kuldotha Tokens does not run anything with Affinity but it does feature Galvanic Blast. Instead of reducing costs it uses Artifacts as a way to power up other cards like Glint Hawk. Ichor Wellspring is used to churn through a deck while also providing fodder of Kuldotha Rebirth. While it does not hail from an Artifact set Thraben Inspector does heavy lifting as a 1-drop that can both produce a piece of metal and replace itself in time.

Kaladesh has provided some nice options for these decks but aside from Gearseeker Serpent none have seen consistent play. I am not sure if Aether Revolt will give them a new weapon but todayâs preview card, oddly enough, doesnât play well with a key component of the decks. Both Affinity and Kuldotha Tokens run Artifact Lands â Affinity to act as a persistent ritual and Kuldotha Tokens as a way to ensure Glint Hawk and Galvanic Blast both operate optimally. Artifact Lands are incredibly powerful and that five of the six have been banned in Modern while also seeing play in Vintage. Why are they so strong? Thanks to Affinity each Artifact Land effectively taps for two (or more) mana. Considering there are entire Eternal decks based around lands such as these with heavy drawbacks (Ancient Tomb and City of Traitors), it makes sense for these six lands to power a Pauper deck.

And yet despite caring about Artifacts and featuring a cost reducing mechanic, my preview card does not get better with Artifact Lands. 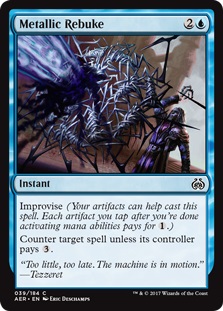 Letâs talk about Metallic Rebuke. Mana Leak sees play and in an ideal world this is a Mana Leak that costs a single Blue mana. That alone means the Rebuke is worth consideration. If the average case is exactly Mana Leak then the card cannot be that bad.

When is Mana Leak good? In Pauper, the counter is quite strong the earliest stages of the game as it can stunt an opponentâs board development. As the turns pile up it gets worse except in a deck that wants to get into a counter war. Mana Leak regains some luster in such situations as it can be put to good use in forcing resolution. Metallic Rebuke might be better than Mana Leak in this scenario as it is more likely to be cast for a single Blue mana in a stack fight which then allows the Blue mage to have another backup in Dispel or Spell Pierce.

So how can we Improvise? Artifact Lands wonât get the job done and neither will mana rocks. Coming on the heels of Shadows over Innistrad Block there will be Clue tokens aplenty thanks to Investigate. Pauper decks will often run Prophetic Prism as a way to filter mana; and, thanks to Improvise, not only will the Prism replace itself, it also can help cast spells without the help of a land. Tron decks love the Prism and with Chromatic Star, Chromatic Sphere, and Expedition Map all hanging around it is possible for Tron, a deck where you donât really need to save on mana, to be the best immediate hope for the Aether Revolt instant.

An interesting option for casting Metallic Rebuke is Cogworker's Puzzleknot. The White Puzzleknot produces the right number of Artifacts to facilitate a one-mana Rebuke. Considering there is already a hyper aggressive Mono-White Artifact beatdown deck featuring the Puzzleknot it wonât take much contorting to fit the Mana Leak variant into the deck:

What about Draw-Go? Spire Golem is one of the best threats in Pauper thanks in part to its Affinity for Islands. A 3 mana counter is fine for a stack control deck but pairing it with Spire Golem and Serrated Arrows means that Metallic Rebuke could get cheap on the quick.

Springleaf Drum and Ichor Wellspring now have additional utility, as does every Artifact creature ever printed. Relic of Progenitus? Makes your spells cheaper. Metalspinner's Puzzleknot? Draw a card and generate a mana. Sanctum Gargoyle? Get back your best card while also leaving up a counter on defense. Iâm doubt this is even good enough but working in Pili-Pala is sure to make some more esoteric deck-builders happy.

Understanding Metallic Rebuke as a card is the easy part. Counterspells are usually good and cost reduction mechanics tend toward the stronger side of things. Yet when something is clearly good it can make a challenge of coherent analysis. Metallic Rebuke has the potential for synergy with tons of powerful cards in Pauper and beyond. While I have a hard time believing it will see play in Vintage and Legacy there are decks there that run Blue mana sources alongside Artifact lock pieces and given enough pieces of metal maybe it will be easy to cast the Instant through a Thorn of Amethyst or Lodestone Golem. It also has the advantage of being able to get around Chalice of the Void and have a mana cost less likely to appear on a Counterbalance flip.

Moving closer to the current age of design Modern has plenty of decks where Artifacts play an integral role. Affinity may want Stubborn Denial instead but Lantern Control often has plenty of pieces laying around. Standard is full of Vehicles and Clues at the moment so seeing Rebuke there is very likely.

Metallic Rebuke is a good card. It is no Mana Leak but at its very best it may be something rare: better. I do not think this spell rises to the level of a mistake but I imagine plenty of slumped shoulders in the coming months.