Growing up, I had a VHS recording of some animated feature called The Flight of Dragons. Iâm talking a recording on a blank tape, not some store-bought cassette in an oversized bubble book or cardboard sleeve. I donât remember who recorded it (probably my mom) or what event happened (I think there were dragons), but I do remember the absolutely joy I felt whenever I would hit play. These dragons were, by and large, friendly and helpful, colored in wonderful pastel.

Those dragons were lies.

They were Phelddagrifs, not majestic beasts who could rain death. If Sarkhan Vol traveled to whatever realm housed the events of The Flight of Dragons, well, something tells me heâd pull a quick, âNope,â and âwalk on out of there.

Now we stand on the cusp of Dragons of Tarkir. If the brood leaders we saw in Fate Reforged are any indication, we are going to be seeing some absolutely awesome winged lizards. These tyrants would have muscled their bulk into the Elder Dragon Highlander if they could, but theyâll be just as happy serving as commanders.

And that brings us to this specific dragon of Tarkir. When I first laid eyes on this majestic creature, the cogs in my mind started to turn. 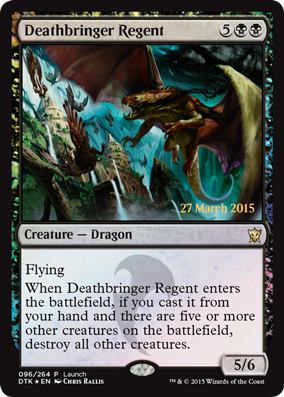 I for one welcome our new draconic overlords.

Deathbringer Regent is quite the Dragon. While the ability tacked on is quite powerful, it is far more suited for games with more than two players, and it shouldnât take too long to understand why (even if it does have Standard applications as a trump to Hornet Queen). From Silumgarâs Brood, it definitely brings along a drifting death. Letâs break this card down into pieces.

As a 5/6 flyer for 7 mana, this card is slated for decks that want to cast their spells. While the body on this serpentine slayer is fine, the rate of cost to power is nothing to write home about for multiplayer mayhem. That said, the body is not negligible, and once it hits the battlefield, it will be well-positioned as a threat.

And when the Regent comes, it will have to be cast. Deathbringer Regent has some demonic heritage with other anti-reanimation-clause-wielding creature-sweepers Reiver Demon and Dread Cacodemon. When we resolve this Dragon, weâre doing it the hard way.

So whatâs the best way to cast Deathbringer Regent? Thankfully, black has an abundance of resources at its murky fingertips to accelerate on mana. From the combo of Cabal Coffers and Urborg, Tomb of Yawgmoth to Crypt Ghast to the chromatically blind Caged Sun, black decks will have little problem reaching the required 7 mana.

So we can cast Deathbringer Regent in all its toxic gassy glory, but how do we leverage its ability? By requiring five creatures on the battlefield, the design of Deathbringer Regent encourages us to hold it back until the threat is real. So unless we are facing off against a Rhys the Redeemed or a Krenko, Mob Boss we may not have need for such acceleration. But what if we want to make sure we can trigger the Damnation every time?

Forbidden Orchard is a nice political tool that can give away tokens for manaâespecially nice in a multicolored deckâand help to fuel the Regentâs wrath. Similarly, Hunted Horror is an on-color solution to make it 60% there while the other cards in Ravnica: City of Guildsâs Hunted cycle contribute as well. A former king of the fatties in Verdant Force could complete the task in as little as one turn cycle, but then weâre losing the Force as well. Varchild's War-Riders will get the job done in time, and the cost is hard to top, especially since the body is not one poised to have an impact for long.

Because it comes with the cast rider, Deathbringer Regent seems suited for decks with ways to return it to your hand. Black has no shortage in this department, except for the fact that the best way to do this is to have the creature be dead. Cards like Phyrexian Reclamation, Volrath's Stronghold, and Palace Siege all can do the deed, but first, the Dragon must be dead. Add to this the fact that Deathbringer Regent will kill off any Carrion Feeders or Viscera Seers left lying around, things become a little trickier. One answer may be to offer up the Regent on an Altarâspecifically Phyrexian Altar, Ashnod's Altar, Carnage Altar, or Altar of Dementia.

If the Deathbringer Regent is feeling especially sneaky, which I imagine is hard with the cloud of noxious gas emanating from its mouth serving as the worst trail of breadcrumbs ever, it could find a home in a Dimir deck. Sunken Hope, Equilibrium, and Crystal Shard all make it relatively easy to rebuy the Deathbringer Regent, provided there is enough mana available. If one wanted to go deeper, Escape Routes exists. The Esper getaway also brings Kor Skyfisher, Stonecloaker, and Emancipation Angel into the fold. White also has the slightly-out-of-place enchantment Martyr's Cause, which goes very well with the black options for raising the Regent from the dead.

It seems to me that Deathbringer Regent is at its best as one tool in an arsenal. It wants to find a home in a deck that can sit back and let other players accumulate resources while protecting its own life total. Deathbringer Regent also cannot be a featured player, but rather, it needs to hold a supporting role, in which it can accomplish its task. The fact is that, unlike its demonic antecedents, the Deathbringer Regent has a much stricter set of requirements that must be met before it can deploy its cloud of doom. The Regent is a classic example of a spider, a hidden threat that can trap opponents and that becomes better the more players at the table (pigeon) that, once recurred, can become a rattlesnake. The fact is that the first time a Deathbringer Regent hits the board, it is simply going to do its job. If it ever has the opportunity to be cast a second (or third) time, it has the chance to change the entire dynamic of the game. Suddenly, committing anything to the board becomes a tightrope walk.

Sunken Hope indeed (especially when paired with a Cavern of Souls set to Dragon).

So what will I be doing with Deathbringer Regent? Three decks of mine are slated to add a member of Silumgarâs brood. First up is Vela the Night-Clad. Velaâs theme of creatures shifting zones is perfect to leverage Deathbringer Regentâs cast trigger. Crystal Shard and Erratic Portal allow the deck to play up the threat of recasting the Dragonâor they let me kill some opponents thanks to Vela while taking out my own army as well.

Next up will be Silumgar, the Drifting Death. Yes, Silumgar likes playing with Dragons, but it is this deckâs desire to keep the board clear and the need to be able come back from behind that helps make the case for Deathbringer Regent.

Finally thereâs Sapling of Colfenor. This not-quite-mono-black deck makes use of board wipes like none other in my arsenal. Sapling loves clearing the land, and the fact that Deathbringer Regent nets a gain in life when âdrawnâ off Saplingâs attack trigger is just maple gravy.

There you have it. Deathbringer Regent is going to lord over Commander tables for years to come. Will you be a victim of its rage or supplicate to its will?