If there is one thing the Pauper community loves, itâs combo decks. It is an unrequited love in that whenever there has been a successful combo deck in Pauper it has been too successful and has summarily been banned. Decks featuring Grapeshot, Empty the Warrens, and Temporal Fissure all proved untenable. Frantic Search was banned so quickly it hardly made a blip while Cloud of Faeries lingered longer and Peregrine Drake, for whatever reason, was allowed to survive a turn of the ban list.

These decks look like combo decks. They have card filtering and selection and game ending engines. The Storm decks were full of rituals that power out game ending stacks of copied spells. When these lists went up they resembled combo decks from far more powerful formats.

And that was the problem. Because of the evolving nature of design and also the many ways Magic gets played it is very difficult for Pauper to ever have access to the same safety valves that other non-rotating formats enjoy. Cards like Daze and Duress are powerful but they are the star of the show, not the supporting cast for Force of Will and Wasteland. Other combo hosers like Pithing Needle or Chalice of the Void make no sense at common. As a result it is hard to have anything that looks like an idyllic combination machine in Pauper.

Of course that does not mean there is any lack of consternation. Rather, there is a large contingent of the Pauper community that pines for these decks. On some level I can understand their desire: Pauper is full of powerful fuel and strong engines but efficient spouts are missing. The previously mentioned decks simply needed to assemble the right cards and victory was all but assured. That is an incredibly attractive option to a certain stripe of player. Yet Pauper simply cannot support these decks and a healthy format. For the format to live the decks had to die.

Yet that does not mean that combo is absent from Pauper. Far from it, as various combo decks have found more success in the Pauper Challenges recently. I think this says more about the relative strength of combo decks in the format than anything else. The previous metagame data came almost exclusively from league results. The leagues, for better or worse, only posted 5-0 results. The combo deck most often seen in Pauper is Izzet Blitz. The

decks is focused around one-shot killing an opponent with either Kiln Fiend or a Nivix Cyclops, powered up with cheap cantrips and Apostle's Blessing and Temur Battle Rage.

Izzet Blitz is the closest thing to a Storm deck in Pauper at the moment. In the hands of a skilled pilot it can defeat an opponent from 40 life (not that I have ever had that happen to me) and the deck can run roughshod over the unprepared. It also happens to run a high density of powerful cards. Ponder, Preordain, Gitaxian Probe, and Gush â these are all incredibly strong effects that cost a pittance. Chaining these together allows the Blitz pilot to assemble a large enough threat to âjust win.â

Then why does it not post more 5-0 results? It is an incredibly vulnerable deck. While not nearly as popular as they have been in the past, Black based control decks lean heavily on Chainer's Edict and similar effects. Edicts are rather strong against this creature light combo deck. Alone these spells are not enough to cement the matchup but they are often joined by other, targeted removal options. Overloading on kill cards can make it a challenge for a deck that relies on key creatures surviving to enact their game plan.

Following this, Izzet Blitz is susceptible to Moment's Peace, Prismatic Strands, and other Fog effects. Circle of Protection: Red is a regular inclusion in sideboards and it can lock Izzet Blitz out of dealing any appreciable damage. While Blitz has access to Flaring Pain they tend to only run one copy, meaning that the Fog player may have enough time establish a winning position before Flaring Pain may even matter.

Finally, like our next combo deck, it is possible for Izzet Blitz to simply fizzle. If Izzet Blitz draws the wrong half of its deck early then it simply does nothing. It can see plenty of cards but if it misses a key creature then it falters. This, more than anything else, may be keeping the deck down.

Tireless Tribe Combo is similar to Izzet Blitz in that it relies heavily on powerful Blue cantrips to stitch together the kill. Using Tireless Tribe and Inside Out, the deck wants to one shot similarly to Blitz. There are some advantages to this strategy. First off it only needs to cast one spell â Inside Out â to achieve lethal damage. Everything else can be achieved by discarding cards. Because of this Tribe Combo can play for a longer game and dedicate some additional slots to defensive cards. Spells like Daze, Dispel, and Gigadrowse do good work in buying time. Tribe Combo is able to run Circular Logic â something no other competitive deck has managed to pull off so far.

The deck is also able to run Augur of Bolas and Gush. This engine is relatively new and relies on the Augur. The ability to dig three cards deep while also finding a business spell helps Tribe Combo keep the cards flowing. Gush is a key element in the deck as it deals 16 points of damage on its own. The Gush â Augur combination is also seeing play in Izzet Delver and some Izzet Blitz decks have adopted the duo.

Augur â Gush is quickly becoming one of the better Blue draw engines in the format. As decks get refined and the earlier turns matter more, non-Tron decks have a harder time lasting to resolve Mulldrifter. While Gush demands a low curve deck and one with plenty of Islands, that is not hard to assemble in the format. Tireless Tribe Combo has similar vulnerabilities to Izzet Blitz, but is far better at converting Gush to damage with only one creature on the table.

Rally Gond won the second Pauper Challenge and Mathonical has updated the deck since. Cutting the two copies of Journey to Nowhere for Standard Bearer makes sense as Journey did little for the deck. Instead, like the other combo decks featured here today, Rally Gond relies heavily on creatures and Standard Bearer does a fantastic job protecting Midnight Guard. This is an important update to the strategy in that it provides an additional layer of resilience.

Combo has a place in Pauper, but it seems to perform better in the challenges. While I do not have the actual reasons for this I can make some educated guesses. First is that decks for the challenges tend, on average, to be geared slightly more toward a specific metagame. As a result, decks that are designed to exploit holes in this preparation could find success. The league tends to be far more random in its composition (from experience) which both works for and against combo decks. Often times these rogue decks pack a weird assortment of answers which could match up well. In the challenges this is less likely as the stakes are high enough to warrant refined decklists.

So returning to the issue at hand â why are these decks derided as ânot combo?â I think the easiest answer is that they all rely on creatures. Conjure up the image of a combo deck in your mind and tell me â how many creatures do they run? How often is it a single creature dealing that damage? These decks may be combo decks but they do not conform to the image. Yet ignoring the presence of these successful builds does a disservice to Pauper as a format. Combo exists, just in a slightly different way. 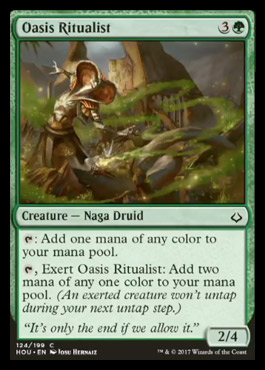 An Hour of Devastation is going to give combo decks another option. Oasis Ritualist combined with Freed from the Real to make an unbound amount of mana. Freed from the Real has always been part of a convoluted combo engine involving animating a land that can produce multiple mana per turn. This involves either a Lifespark Spellbomb or a Wind Zendikon traditionally. Now, with Oasis Ritualist, the deck has a far more compact engine. Combined with Ponder and Preordain, and perhaps Benefaction of Rhonas, it will be fairly easily to assemble the key cards. Then itâs just a matter of finding a way to kill â whether it is Rolling Thunder, Pyromatics, or Kaervek's Torch.

Combo in Pauper may have a new, snake like face.