I love baseball. It is my favorite sport to watch and the home of my favorite team (the New York Mets). I, like so many Americans, was introduced to the game at a young age. At first I learned how to appreciate the game itself â a strikeout or a home run or an amazing defensive play. During the first summer I worked at a sleepaway camp my main source of contact with the outside world was the New York Times, and being a teenager I was concerned more with the Sports Section than current events. I starting poring over the statistics provided, trying to understand the game at a deeper level.

Then I started watching the game in a new way. In college I would try to guess what the pitcher would throw and how the batter would react. I started to question managerial decisions and became deeply enamored with the sport. This was at the same time that advanced statistics, also known as sabermetrics, were infiltrating the sport (think Moneyball). These numbers gave fans a new way to examine the game and the value of different players and decisions.

I start this article with this aside because I think this is an analogue to how people can enjoy Magic. Some people just enjoy playing while others try to understand a deeper strategy. Players can try to gain an edge by selecting a top deck or go to the next level by trying to guess what will be good next week. I am going to be looking at the eight Pauper Challenges from the Amonkhet season and break them down. I want to explain what decks were good and which ones underperformed.

First up I want to take a look at the most basic statistic possible: volume. This is a simple counting statistic that measures how many of each archetype showed up in the Top 32s. While these numbers do not tell us how good each archetype is, it does something else: it showcases player choice. Regardless of how good or bad a deck actually is if a lot of people are playing it, they perceive it as having a good chance to win.

It follows that decks that do well should be popular. The first challenge had three copies of Izzet Delver in the Top 8 and its popularity skyrocketed. As obvious from the chart below it was the most popular deck of the season with 45 appearances â nearly 18% of all Top 32 lists. 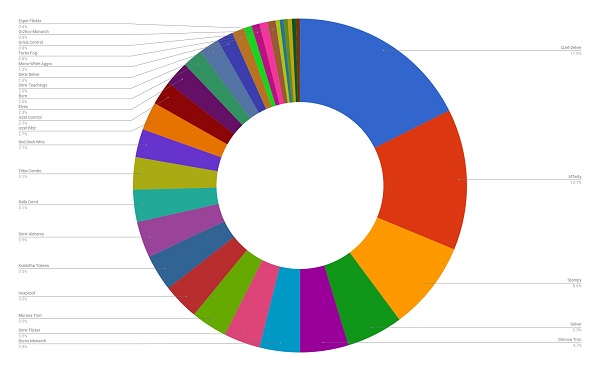 After Izzet Delver the next most popular deck is Affinity and then Stompy. None of this should be surprising to anyone who is familiar with Pauper. Affinity is a longtime powerhouse that is fueled by one of the best mechanics in the history of the game. The ability to present multiple undercosted threats while also having multiple lands that effectively produce more than one mana is so powerful. Stompy has been one of the best decks in league play and despite not having similar numbers in the Challenges it still has put up respectable numbers.

These three decks represent the most popular archetypes in the format. As I will get to later, these are not necessarily the three best decks; but, when looking at it from this context it does not matter. Their popularity means that it is reasonable to expect them to show up en masse during any Pauper Challenge.

There is another volumetric measure of success â Top 8s. Given how popular these three decks are, if their success is evenly distributed, they should have a similar presence in the elimination rounds. This is not quite true. 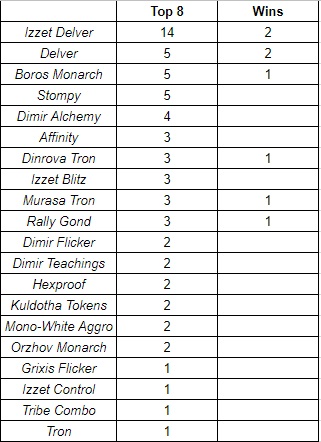 Izzet Delver remains the most popular deck, but Stompy is in a similar position to two other decks: Boros Monarch and Delver. Unlike Stompy, these decks have won the challenge a total of three times (Delver twice, Boros Monarch once). Affinity is behind other popular decks with only 3 appearances.

These two buckets of data tell us a little bit. First, Izzet Delver is not only a popular deck but its strength can be extrapolated by its popularity in the Top 8. Stompy also, despite not being as effective in a seven round tournament, still provides a good chance at earning a winning record. Affinity, however, is not as successful. Despite making up 13.67% of the Top 32 lists, it was only around 4.7% of the elimination rounds. This may have something to do with the copious amount of hate available for Affinity â Gorilla Shaman, Ancient Grudge, Gleeful Sabotage, and others â or the tendency of pilots to go down to 16 lands and thus fail to their own draws.

These are still volume stats. They only count the number of occurrences. In order to better understand which decks are strong and which fail to live up to their hype, an additional layer of analysis is needed. I am fond of using Frank Karstenâs method, assigning a point per match win and deducting a point per match loss, Top 8 inclusive. A deck that goes undefeated in a 7 round tournament but loses in the Quarterfinals would finish with a final record of 7-1 and a Karsten Score of 6; a deck that sneaks in to the Top 8 at 5-2 but wins the whole thing would earn a final record of 8-2 for the same K-Score. For the sake of this analysis I am focusing on decks that have achieved more than 3% of the Top 32 metagame â 8 or more appearances (or at least one per Top 32). Note: A special thank you to Jason Sirichoke for helping me with compiling the data. Another note: I am fully aware that we are working with a statistically non-significant sample size but this is what we have and despite the small N we can still make informed decisions. 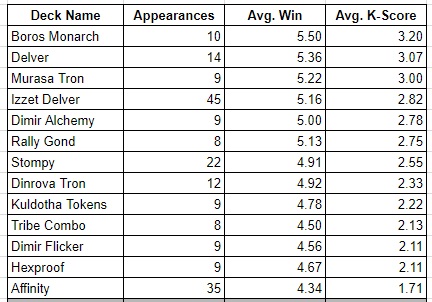 Here is the bottom half of the chart. 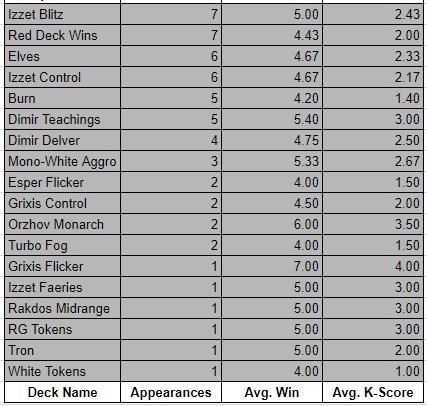 Out of the 31 difference archetypes that posted a Top 32 finish, 13 had at least 8 appearances. From the qualifying list the best overall deck was Boros Monarch. The deck was played in the Top 32 10 times and made the Top 8 in half of its appearances. Compare that to Izzet Delver which âonlyâ made the elimination rounds 14 times (about one-third of its trips to the Top 32). Boros Monarch won a challenge (Izzet Delver won two) and has a gaudy average K-Score of 3.2. It averaged 5.5 wins per appearance meaning that the deck was likely to make the Top 8 (all but one challenge went 7 rounds and a record of 5-2, with good breakers, would make Top 8 while 6-1 and better was a lock; the other challenge on Fatherâs Day went 6 rounds).

The old stalwart Delver is not far behind, with 11 total appearances and the same number of Top 8 appearances and twice as many titles. Murasa Tron is a big mana control deck that just barely made the cut off but has an impressive average K-Score of 3 and average win of 5.22. Delver is a deck that naturally has game against the field while Murasa Tron can run a wide variety of removal and has an overwhelming endgame.

Izzet Delver, despite its insane popularity, remained an excellent choice. It averaged better than 5 wins and despite a weaker K-Score, it is possible that these decks beat up on each other a ton in the later rounds, leading to attrition. Dimir Alchemy is a somewhat surprising deck in that it has never been in the conversation of the best in the format. It uses its namesake â Forbidden Alchemy â to find counters, removal, or fuel Gurmag Angler.

Stompy is an interesting case. As mentioned before it has been one of the more popular decks in league play but it never seemed to put up the same fight in the Challenges. It ended up with a solid 22 appearances and five trips to the Top 8 and came very close to getting the 5 wins it needed to show up in league results. It appears as if Stompy is good enough to get five wins but struggles to do much better than that.

Again, Affinity presents an interesting case. It has the worst average Wins and average K-Score of any qualifying deck, the only one where the K-Score is sub 2. This was hurt by the June 18th event where Affinity had a 3-3 finish and three 4-2 finishes. At over 17% of all Affinity finishes, this had a negative impact on the decks stats. However that does not take away from the fact that Affinity still struggled in the other Challenges, likely due to how strong hate is against the deck.

These results are Top 8 inclusive and give us an impression of what is best suited to outright win an event. Decks like Boros Monarch, Delver, and Izzet Delver all have a leg up on the competition in this regard. Yet these stats do not tell us what decks are likely to get you to the elimination rounds.

For this, I again turned to Jason Sirichoke who pointed out the issues with relying purely on Top 8 inclusive stats. Jason proposed the concept of Win+. This metric would measure the swiss rounds and log every win over a 4-3 record (or 3-3 for the June 18th anomaly) as these were the records required to break even on entry fee. So a 5-2 record would result in a single Win+ while 6-1 resulted in two. The goal here was to try and understand what deck gave a player the best chance of reaching the Top 8. A Win+ above one is great, between .8 and .99 is very good, and it trends down to 0, which is merely average. 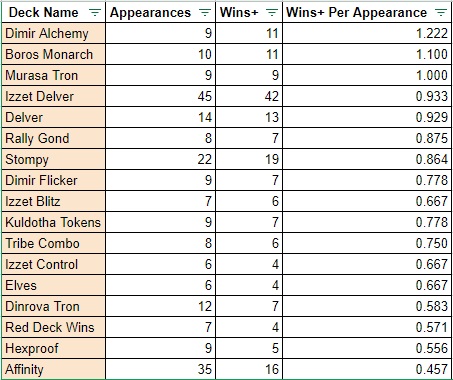 Some of these archetypes should look familiar. Boros Monarch, Izzet Delver, Murasa Tron, and Delver are all near the top while Dimir Alchemy out performs them all by virtue of a smaller sample size. Stompy and newcomer Rally Gond find themselves in the âvery good campâ while Affinity, again, finds itself at the bottom. Outside of Boros Monarch, all the decks with a Win+ above .9 have access to Blue, and half the top ten regularly run the powerful Ponder and Preordain.

The Challenges have provided an abundance of information. Here are some conclusions I feel comfortable drawing:

I think this last point merits some additional discussion. As with all non-rotating formats, Blue is incredibly powerful. Ponder and Preordain give the color access to tools that can improve card quality unlike anything else in the format. Blue is not a problem â yet.

Between Stompy, Boros Monarch, and Rally Gond, there are non-Blue options that have performed admirably over the course of the season. Yet that pales in comparison to the popularity of Blue. If this continues through the next season of Challenges and beyond then I would to see Blue knocked down a peg, if only to improve the color diversity amongst the top decks. I want to be clear â nothing is wrong now. If these trends continue along these lines, I would like to see something done. For the moment, Pauper is great.

There are a wide variety of decks that could propel you to the Top 8 and six different archetypes that came out on top. Control, combo, and aggro all see heavy play and new cards are constantly making an impact. While nothing from Hour of Devastation stands out as a high impact addition to Pauper that does not mean the set wonât change things.

Statistics are not perfect. Unlike baseball these are not predictive measures but rather they tell us the story. The tale of Amonkhet season is one of Delver in multiple forms and Palace Sentinels. Itâs the story of Stompy performing as expected and Affinity failing to measure up. Itâs the story of combo coming back into the picture. And I cannot wait to see what the next chapter has waiting for Pauper.