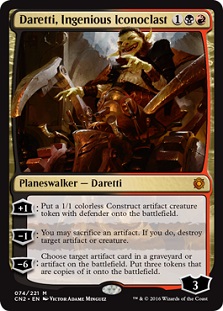 By the time you read this Conspiracy: Take the Crown will be fully spoiled. I am not so lucky, and am instead working with dribs and drabs. That being said, I am loving this set. Outside of Pauper, I am an avid Commander player and this set looks chock full of good stuff for some of my decks. Iâm not-so-patiently awaiting a copy of Daretti, Ingenious Iconoclast for my Grenzo, Dungeon Warden deck (three Smokestacks? Donât mind if I do) and am really excited to play with some Monarch cards in my Athreos, God of Passage deck featuring Endless Whispers. Yes, itâs just as chaotic as it sounds.

But what about Pauper? The nature of Conspiracy forces us to examine a truth about the format: the world of Paper Pauper and Online Pauper are not perfectly in sync. While Pauper was nurtured in the digital realm it has a strong offline following.

The gap has created some discrepancies. Some players and groups go by the online legality list to provide an established metagame while also limiting some extremely powerful cards like Hymn to Tourach, Sinkhole, and Goblin Grenade. Going by the so called âOnline Listâ presents a known quantity but does exclude some cards that have significant nostalgia value. On the other hand, using the Online legality rules helps to clearly define what is legal and ignores some of the problems created by gradient rarity in older sets. Needing to know whether a U3 or C1 is legal should not be a prerequisite for playing Pauper.

But there are cards printed at common on paper that have not made the translation to Magic Online. Forked Bolt made an appearance with a Black expansion symbol in Duel Decks: Zendikar vs. Eldrazi. Playable in Legacy, I am sure this card would find a home in Pauper. Phyrexian War Beast is hardly a powerhouse but could easily bolster certain strategies online.

Going the other way, the various Masters Editions and Vintage Masters have created problems in the physical world. Chainer's Edict, Beetleback Chief, and Battle Screech have never been printed at common but were released as such on Magic Online. Having a format vary from game store to game store could create âfeel badâ moments for people just getting into the game.

So what is the solution? In my opinion Wizards should come out and declare one legality that governs both paper and digital. I would err with the list currently used for online. Hereâs why: the second piece of this recommendation would be for the online release of all commons created after Pauper was sanctioned (2009).

Would this leave some people unsatisfied? Sure. The change would help to eliminate the disparity of the two ways to play while also injecting new life into Pauper.

The first Conspiracy has at least one card that people want to play in Custodi Squire. Wakedancer also fits this criteria but was recently released in Eternal Masters, so there are no questions that it is legal. Conspiracy: Take the Crown has some cards that could see play. More importantly it introduces a unique way to generate card advantage in the form of the Monarch. 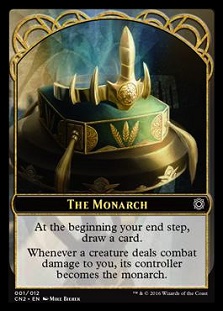 For those unfamiliar, a player can become the Monarch either by playing a card that declares it to be the case or by dealing combat damage to the current Monarch. Mel Brooks was right as the Monarch is able to draw an extra card on each of their own end steps. If the second Conspiracy is ever released Online, the Monarch mechanic could provide an interesting subgame for Pauper.

Being the Monarch is clearly a Good Thing. The ability to draw an extra card each turn can shortly become an insurmountable advantage. Cards like Palace Sentinels and Thorn of the Black Rose could see play simply because they come with a delayed draw trigger. The problem comes in how often the crown is likely to change hands. Combat damage happens a lot in Pauper, itâs the main mode of winning the game. The creatures with the enter the battlefield trigger are the easiest way to ascend the throne and they are all slightly overcosted. Committing a 4-drop to the board only to see a Goblin Heelcutter come down and overthrow you could result in card parity, your opponent is now the Monarch and netting the extra draw.

If Pauper gets to a point where the creatures who grant the crown are good, then the Monarch mechanic is likely to be bad. When the format slows down enough for these creatures to be playable it is because combat happens. Casting a worse creature for a moderate benefit that can be lost, that is not a way to win the game.

Where I can see these cards doing work are in âdestroy all monstersâ control decks. Both Mono-Black Control and Dimir Teachings could make great use of the extra card per turn. These decks are quite good at killing threats and could easily prevent any sort of combat damage. Chittering Rats is good at fueling Gray Merchant of Asphodel, but it is also fine at chump blocking for an additional card. If these cards come online I could see them as options for this style of play.

As for the other cards, there are two that standout. 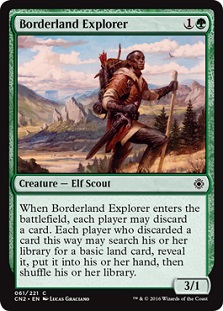 Borderland Explorer is quite the card. It is a 3-power Elf for two mana. On stats alone, it could see play. Stompy has access to multiple 3-power 2-drops in Swordwise Centaur and Garruk's Companion, but at

Borderland Explorer makes it easier to run this card in decks with lands that are not Forests. The one point of toughness is a liability, Blade of the Sixth Pride has seen almost no play, but being an Elf is an important ability. Feeding Wellwisher, Timberwatch Elf, and Elvish Vanguard gives this card a leg up on just about any other common from Conspiracy: Take the Crown.

Or rather it would if not for its other ability.

When it enters play, Borderland Explorer allows any player to discard a card to go get a basic land. The caster can mitigate this by running cards like Basking Rootwalla or discarding for Moldgraf Scavenger. Putting a spell with Flashback into the graveyard is fine, as well. We want to get a smooth draw after all. The problem is that the Explorer gives your opponent the same option. In multiplayer this is far from terrible as it can build alliances. Head to head? We want our opponents to stumble on their board development, especially if we are trying to apply pressure with a 3/1 creature. If we can give someone an option to hit a land drop it will be to our detriment. Simply put - 3 power is not enough to make me run this card. Sylvan Ranger remains a better option. 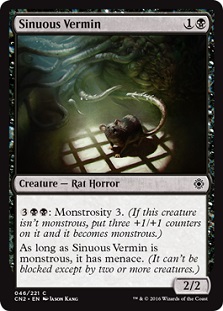 Sinuous Vermin is an interesting card. As a 2-mana 2-drop it gets the job done. The ability to become a 5/5 with Menace is too big to ignore. Monstrosity is one of those mechanics that should see more play in Pauper. From Theros block, the ability allows us to play reasonable creatures on curve while providing a one time spout for mana. I found success with Nessian Asp in the past but Sinuous Vermin seems far superior. First, it has a body that is respectable on curve. Second , itâs Monstrous form can end the game very quickly. We have seen Gurmag Angler to serious work in Pauper, and Sinuous Vermin has similar stats.

Sure, it may be more expensive. The initial casting cost, however, makes it a prime target for Unearth. The ability to get back Sinuous Vermin in the mid-to-late game and leave up mana for either defend it or clear the board and then use that mana to make it a monster presents an attractive line of play. As Black based control decks continue to shave lands in order to try and increase threat density a 5-power creature that can hit the board on turn two is too good to pass up.

Conspiracy: Take the Crown presents a few interesting options for Pauper. The cards present are unlikely to shake the metagame to its core. The set itself presents the opportunity to once and for all establish a set of rules for the format. That is a better prize than any crown.