When I received a message from head honcho Adam on a Sunday evening, I feared the worst. I guessed that my most recent submission had been rejected or that Gathering Magic was going to have to let me go. This isnât an indictment of AdamâI always feel this way when a boss reaches out unexpectedly. Heck, when my mom calls, my first inclination is to go, âWhatâs wrong?â But this time, like every time Mom calls to date, there was no bad news. In fact, things were looking up. Adam wanted to give me the chance to introduce you all the glory of Hooded Hydra. After doing a victory lap around my tiny Brooklyn apartment and confusing the heck out of my fiancÃ©e, I accepted.

Readers, allow me to introduce you all to Hooded Hydra! 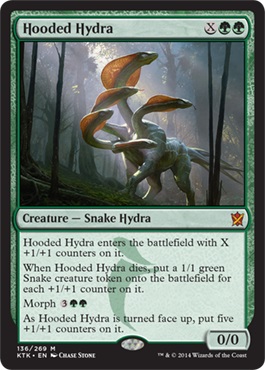 First, I have to get this out of the way: This card is absolutely absurd with Doubling Season (and its brethren Primal Vigor). I mean, with either of these cards on the table, Hooded Hydra can convert every extra mana into four Snakes. While not every deck featuring Hooded Hydra is going to go the route of these enchantments, it is good bet that quite a number of Commander decks are going to feature the combo since it plays into so many popular themes: giant creatures, token armies, and +1/+1 counters.

Hooded Hydra is something I love in Commander (and in Magic in general)âit is one card that can assume different roles across a spectrum of decks and situations. It features the returning mechanic morph, meaning against any deck featuring Forests and Islands, it isnât always going to be Willbender for much longer. On top of that, morph allows Hooded Hydra to hide itself, making it an awesome response to board wipes. Not only does wiping the board while you control the Hydra leave you with five tokens, it also has the added benefit of making every future sweeper played by your group a little scarier when the back of your sleeve is facing up. Insurance against game-changing spells is important in Commander, and Hooded Hydra gives the controller a chance to come out swinging once the field is clear.

However, this might be the narrowest application of the new card from the Sultai Brood. Oh yes, that is a fang watermark we see, and this card is quite ruthless. Letâs break it down.

Hooded Hydra has a home in decks based on pumping out giant monsters. Having an

in the upper-right corner means that any deck that loves its mana is going to play very nicely with this Sultai mythic. Three legends that immediately leap to mind for taking advantage of this attribute of the Snake Hydra are Rosheen Meanderer, Kruphix, God of Horizons, and Omnath, Locus of Mana. One of the biggest risks with sinking a whole turn into one giant beater is that, chances are, there is going to be someone holding an answer. While turning Hooded Hydra face up is a great way to ambush a Supreme Verdict, paying the iron price is going to create an interesting tension. What is more threatening: fighting a horse-sized duck or one hundred duck-sized horses? Kill an Omnath-fueled Hooded Hydra to find out.

Since we now know the Sultai mechanic is Delve, one can wonder if there is going to be some way to fuel that

by exiling cards from the graveyard. I can only hopeâ.â.â.â

Decks of this ilk are going to probably want to fuel big creatures first while focusing on tokens as a secondary option. Magic 2015 Limited standout Hornet Queen works well here, as do Anthem effects like Baru, Fist of Krosa (which conveniently wants more lands as well). Hooded Hydra does have some tension with other common inclusions in ramp decks, as it plays very poorly with Genesis Wave and Genesis Hydra. Focusing on the X factor can take ramp decks in a slightly different direction. But that is still only one aspect of this Hydra.

So I hear Hooded Hydra likes +1/+1 counters. Sure, you could brute-force these on there with actions like tapping lands, but this is Commander, and we have options! There are multiple legends out there primed to maximize the number of counters on the Hydra, and theyâll only help the caster as the game progresses. Vorel of the Hull Clade can help this card grow out of hand rather quickly while Varolz, the Scar-Striped turns every dead creature into more creatures and potentially more Snakes. Jarad, Golgari Lich Lord, a personal favorite, plays nicely with a big Hooded Hydra as well, turning it into a massive life-drain while flooding the board with tokens. Perhaps the Commander that leaps to the forefront is Ghave, Guru of Spores. With Ghave out, you are going to need a near-infinite number of dice and beads to keep track of everything. Ghave and Hooded Hydra are quite the tag team, fueling each otherâs shenanigans.

Ghave also has the added benefit of being in the Abzan wedge. Recent spoilers have shown us that there is a strong +1/+1 counter theme in Abzan. Cards like Abzan Ascendency, Hardened Scales, and Ivorytusk Fortress all slot nicely into Ghave while also enhancing your Hooded Hyrda. Are we sure this thing is Sultai? Maybe its morph mode subscribes to the scale-of-the-dragon model.

Proliferate, evolve, and scavenge all work wonders here. Renegade Krasis plays into the game of casting big threats while also making the payoff of the Hydra that much greater. Proliferate helps with the ticking time bomb while also working with Orochi Hatchery for Vorthos points. Death's Presence can become bonkers quickly, even after the Hydra kicks the bucket. Every dead Snake continues the cycle.

So apparently Hooded Hydra makes tokens. While I am more inclined to Graveborn and Zombie tokens, I can get behind a good Snake. As mentioned before, Hooded Hydra does work with Ghave on the counter front, but it should be obvious that they both work splendidly with tokens as well. Going wide with the army-in-a-can attribute of this card takes us in a completely different direction. Again, Baru, Fist of Krosa or his ancestor Kamahl, Fist of Krosa can help turn these tiny Snakes into a deadly force. Going along on the set of tribal lines, all those fanged creatures do a fine job of feeding Ulasht, the Hate Seed. Finally, if we want things to go out of control, there is always Rhys the Redeemedâbecause more Snakes.

Snakes, Why Did It Have to Be Snakes?

Iâd be remiss if I didnât talk about the fact that this card is a Snake Hydra. Putting this card into a Seshiro the Anointed deck means that once it dies, everything it leaves behind is a Thieving Magpie that also happens to be a 3/3. Combine this with cards like Nylea, God of the Hunt or Garruk Wildspeaker, and you suddenly are going to be drawing a lot of cards. While Snake tribal is not something Iâve seen very often around the table, I can only hope that the Sultai Brood gives Seshiro and the Orochi a few more clan members.

This just scratches the surface of the ways to make Hooded Hydra work for you. While I donât have a deck that is perfect for it yet, I have a few cards I canât wait to combine with it, including:

And oh so many more. If I were going to find a home for Hooded Hydra right now, it would almost for sure be in my Vorel of the Hull Clade deck:

Hooded Hydra would take over Mycolothâs slot in Vorelâs Hydra Horde. I canât wait for the Snakes to fall out of the basket with a Master Biomancer on the board.

How about you? How are you going to incorporate Hooded Hydra into your 99+1s? I canât wait to see what else Khans of Tarkir has in store if this is one of our first tastes.