Aetherborn, what do we really know about them? Well for one, we know they spontaneously came into being on Kaladesh by being a byproduct of the aether refinement process. They do not have a gender and refer to themselves as they/them/their. They also have fleeting lives, because Aetherborn bodies are in constant flux as the aether they are made of gradually goes back into the atmosphere. These beings donât have to eat or sleep so, instead, they try to savor life by enjoying and remembering every moment of their waking life.

We can see this on cards such as Live Fast. This is the flavor text on said card, "When you have the chance, take it. Laugh, sing, dance. Don't allow the night to end."

Then we get this on Die Young.

"When the time comes, let go. Nothing lasts forever."

But what if you could live forever? I have a theory that Aether Revolt is about the Aetherborn revolting. Why? Well, letâs look at another cardâs flavor text, Essence Extraction.

âThe "gifted" among the Aetherborn can draw the life essence of other living beings into themselves.â

So if you could live forever, would you? Would you drain otherâs life essence to extend your own life? Why am I asking these questions? Because of my preview card of course! Yahenni, Undying Partisan! 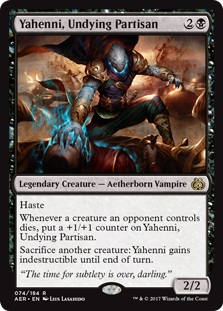 I love MTG lore. I donât know why, but I do. So, I know a little about our mysterious character, Yahenni. They are one of the few gifted Aetherborn that can drain life from other living beings. They first did it on accident and then again in self-defense. Yahenni was in a corner and was about to die and they did what came natural to them. Desperate times call for desperate measures, Yahenni drained the full life force from a guard that was going to kill their friend and gained an extra twelve days to live. When they drain life they feel everything from ecstasy, enjoyment, and love to death, depression, and hopelessness. Weâve seen plenty of Aetherborn cards, but we havenât seen an Aetherborn Vampire, until now.

So where does Yaheeni fit? Well, just by looking at the card we can tell that it belongs in an aggressive shell of some sort. We donât currently have any tier one aggressive Black decks so we are going to have to brew around the card a little bit. The best B/R deck I can think of that Yahenni might fit into, is this one.

The first thing youâll notice about this deck is it doesnât run any Blue sources and yet has 4 Prized Amalgams. Thatâs just for card advantage when you recur a Scrapheap Scrounger or Haunted Dead. The deck has plenty of discard outlets like Cryptbreaker, Insolent Neonate, Smuggler's Copter, Lightning Axe, Bomat Courier and Cathartic Reunion. So, you have plenty of ways to make sure the card finds its way to the graveyard without having to cast it.

This deck can be very aggressive. Iâm sure you could tell that by just looking at the deck list, but it can also grind with the best of them. Scrapheap Scrounger and Haunted Dead are fantastic ways to recur Prized Amalgam at instant speed. You also have card advantage in Cathartic Reunion, Neonate, and Bomat Courier. Cathartic Reunion and Neonate arenât always card advantage but they are when youâre discarding cards that you are just going to recur or cards that you can cast with Madness.

What if the game goes long?

Well, thatâs where Voldaren Pariah and Yahenni come into play. Itâs obvious why Voldaren Pariah is a stalemate breaker. Abolisher of Bloodlines is a 6/5 flying creature that forces your opponents to sacrifice three creatures when you probably only had to sacrifice a couple of Scrapheap Scroungers or Prized Amalgams. Now Yahenni will grind out your opponents too because it will just grow bigger and bigger as the game plays out. Itâs nearly impossible to kill since you will have plenty of creatures to sacrifice to it (those creatures you can likely just recur again anyway) and when it sees one of your opponentâs creatures dying, it will also grow. Keep in mind this counts creature tokens too. So, while you may have to lose one creature to make Yaheeni survive that battle against a Gideon token, after the first battle it will be a 3/3 and the more they chump Yahenni, the bigger and badder it gets until you can Key to the City and hit them in the face for a bunch of damage.

Yahenni could possibly fit into a Vampire deck but theyâve proven over and over not to be quite good enough to break into tier one territory and to be quite frank, I donât see Yahenni making that archetype any better. Especially when Olivia, Mobilized for War didnât do much for the vampire archetype.

However, Yaheeni is a very cheap Legendary Vampire and that makes it perfect for Tiny Leaders or as a general in Commander.

Hereâs my go at a Yahenni Mono-Black Commander deck.

Hereâs my go at a Mono-Black vampire commander list. I believe Yahenni fits perfectly here as we try to abuse the ability to sacrifice a creature by draining your opponents or forcing them to lose creatures to with Grave Pact or Dictate of Erebos. We can also push Yahenni through when itâs big enough with Shizo, Death's Storehouse. You can tell the deck has plenty of vampire synergy just by glancing at it. Urza's Incubator, Coat of Arms, Door of Destinies, and a bunch of vampire creatures that all help each other. It also abuses the Mono-Black theme with things like Gauntlet of Power, Jet Medallion, and Caged Sun. Then of course we have some powerful Black draw spells that cost life but itâs okay because vampires tend to gain us a bunch of life just by playing them or attacking with them. Give this deck a go if you like Mono-Black or just love vampires!

This was my first time ever spoiling a MTG card and I had a blast doing it. I hope youâve all enjoyed it as well. I canât wait to see what other cards get spoiled this week! Make sure to leave any comments below and I will get to as many of them as I can, also make sure to check out our review of the set starting next week!

As always, thanks for reading guys and gals.