Welcome back everyone. I was on a hiatus last week due to personal reasons, but I'm back with a bunch of new cards from M19. It seems like Wizards is just hitting it out of the ball park with their last three sets. So many great and powerful cards, some new and others much needed reprints. I'm excited to play with Crucible of Worlds and Omniscience in Standard again. While all the cards from M19 haven't been revealed, I've already seen plenty that I'm excited about and can't wait to build around. You know what they say, the early dragon gets the wurm! So today I will be talking about some of the cards I'm excited to brew around from M19. So many sweet, sweet cards, let's start! 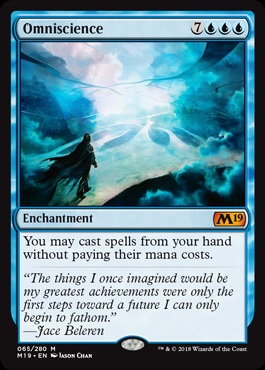 I love this card, when it was first printed I wasn't sure if I could make it see competitive play, but I tried and ended up succeeding. Ultimately, I ended up cutting the card and got 15th place at GP Charleston with five color Door to Nothingness Control and Travis Woo made an OmniDoorThragFire deck. The reason I think this card has potential in Standard is because of Mastermind's Acquisition. You can set up a loop easily with Mastermind's Acquisition and a couple of Recollects and/or Wildest Dreams. I'm currently thinking I want to play four colors (no Red) to make this deck work. The best part is you don't even really need to run more than one Omniscience since we have Mastermind's Acquisition. Even if it gets destroyed you should be able to get value out of it or at least be able to Mastermind for a Recollect to re-buy it. We don't have the best color fixing ramp like Farseek and Chromatic Lantern, but we do have Gift of Paradise. We also have Worn Powerstone, Gilded Lotus, and Hour of Promise. You better bet I'll get a list up as soon as all the cards are revealed for M19. 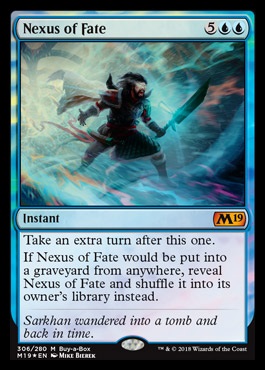 I can't remember the last time I considered buying a box of Magic cards. Nexus of Fate really makes me want to. This is our first Time Warp card that is instant, on top of that, it also shuffles back into your deck, allowing you to take yet another turn. What's so backbreaking about Nexus of Fate is that you get to take two turns in a row, it's like a pseudo Time Stretch. Two turns in a row opens the door for so many possibilities. On your first turn you can deploy one or two planeswalkers and on your next you can Fumigate the battlefield, activate your planeswalker(s) and then pass the turn back to your opponent. They'll have a battlefield devoid of creatures while you have a Planeswalker or two out. All planeswalkers want to be played on an empty battlefield and Nexus of Fate really helps with that. 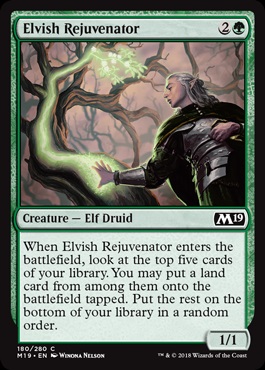 Such a plain design but man is it sweet. It even allows you to get non-basic lands which is so important for multicolored mana bases and Hour of Promise. Ramping and blocking is always a welcome addition to any Green mage. This card is going to see so much play in ramp decks, even if Goblin Chainwhirler is a thing. I'm going to try Elvish Rejuvenator in Modern Mono-Green Tron. It's not explosive, but it allows you to be consistent with Tron and it ramps you. It becomes even better after Game 1 where people are blowing your lands up or trying to slow you down with things like Damping Sphere. Just ramp up the old-fashioned way into your Wurmcoil Engine and Karn Liberated. 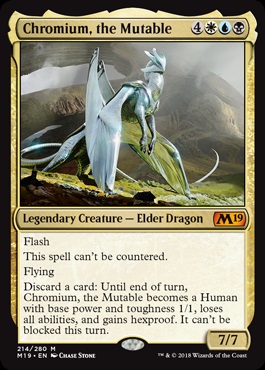 Oooooooooooooooooooo Baby! Chromium, you're so damn majestic! Good night Nezahal, Primal Tide, we hardly knew ye. Chromium is an amazing control finisher, so good in fact that it wants to be played main deck of Esper control decks instead of the Sideboard. Just picture this, Nezahal, Primal Tide is playable, in fact it's played right now. Now see how much better Chromium is. Chromium has flash, flies, and only requires you to discard a single card to have it avoid pinpoint removal spells like the ever so popular Vraska's Contempt. You also won't be able to Disallow Chromium as easily where Nezahal you could just Disallow his return to the battlefield trigger and leave him in exile forever. Chromium will be played in Standard, especially after Torrential Gearhulk rotates out.

This is also a great dragon to just reanimate with Liliana, Death's Majesty. A 7/7 flier is a three-turn clock, it also protects itself, and fuels your graveyard by discarding if that's what you want to do. I'M SO EXCITE!

Why does Nicol Bolas have a goblin face whenever he's a planeswalker?! That's my only question. Outside of that, THIS CARD IS SWEET! I loved me some Nissa, Vastwood Seer and Jace, Vryn's Prodigy and I'm going to love me some Nicol Bolas, the Ravager. What you get from face value is already pretty good. A 4/4 flier that doesn't die to Glorybringer and makes your opponent discard a card when it enters the battlefield is fine. The Transform is the whip cream and sprinkles on your ice cream, and I do love me some whip cream and sprinkles.

It's going to be fun playing with this elder dragon. It's too bad we won't see a Temur Ugin Elder Dragon that transforms into a colorless planeswalker since Ugin became colorless after he "transcended mana." 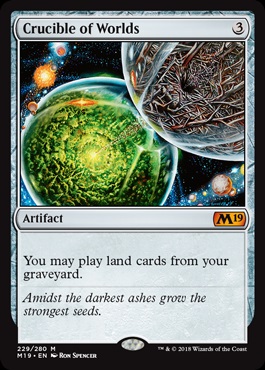 We have plenty of utility lands in Standard and Crucible of Worlds is a fantastic way to continuing re-buying them. Field of Ruin, Evolving Wilds, Hashep Oasis, and Ipnu Rivulet are all excellent ones to recur. It's also a way to insure you get to at least draw one card every turn with Tatyova, Benthic Druid if you have no lands to play from your hand. It's also a nice bullet to tutor up with Whir of Invention, you can then start recurring lands like Inventors' Fair! Crucible of Worlds is also just a solid way to cycle the cycle lands and put them into play with Crucible of Worlds. Just an overall value card that's slow but efficient. 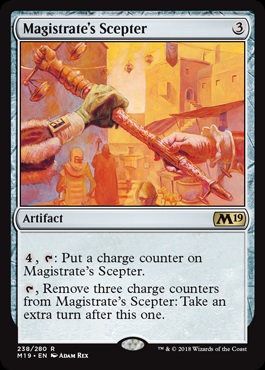 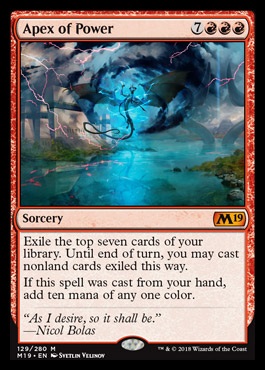 OmniApexBolasofFate? Eh? Apex of Power is basically just a giant ritual, it's going to be hard to play this over Omniscience, but Apex of Power does something that Omniscience cannot do, and that's thinning your library. Thinning the library is important only if you're trying to take infinite turns with Nexus of Fate, outside of that, I don't think Apex will see play. The only exception is maybe alongside Jaya Ballard / Chandra, Torch of Defiance? The format would really have to slow down. It is a sweet card though and I will try to build a deck around it, just not sure how competitive I can make it.

That's all I have for M19 cards that I'm hyped for right now. By next week I should be able to give you some brews with not only these cards but also whatever else gets revealed from M19.

Thank you for reading.