White | Black and Gold | Red and Artifacts | Green and Lands

Today we'll be going over the Blue cards from Core Set 2020! Hopefully there's nothing too crazy to help Esper out. I don't think that decks needs any more cards. Let's go ahead and go over my grading scale.

I will not be going over cards that I believe will not see play in Standard. For example, cards like Wishcoin Crab and Watcher in the Mist will be omitted since they are just Limited cards and saying, "This is just a Limited card" repeatedly gets old rather fast. Don't worry though, I will be covering all the rare and mythic cards in the set. So, if you like a certain rare or mythic, it will be mentioned in the review.

2.5 - The cycle of hate cards are all going to be great in the Sideboard.

2.5 - I can see reanimate decks playing this and then Quasiduplicating it. You can also just play it as a singleton. I like this a lot more than In Bolas's Clutches, just for one mana you get a creature and your opponent can not get the permanent you steal back if they kill Agent of Treachery. Even just playing one or two in the Simic steal decks seems perfectly reasonable. If you do ever manage to trigger the draw three ability, you'll just win the game.

1 - A super fun card, especially for Commander but it's pretty unplayable in Standard. Don't get me wrong, I'll brew around this card and play it but it's way too much work and effort for such a high costed card to see competitive play.

2.5 - This Cavalier reads, "Put two cards from your hand on top of your library" if your opponent controls Narset. That's the only reason I'm not rating this thing higher. The stats and ability on it are all fantastic but Narset is a pretty popular card.

2 - Solid Sideboard option against aggressive Red decks. This gains you so much life against Mono-Red and seems like a slam dunk for the sideboard of Mono-Blue Curious Obsession decks.

2.5 - Think of this as a Blue Jadelight Ranger. It's not as strong as Jadelight Ranger but it's still good for three mana. Especially if you are abusing its creature typing.

3 - A fixed Dig Through Time. I really like this card, and I think it will see play but it competes with Narset. It's just way worse than Narset if you are a non-creature deck. However, if you are playing some creatures than Drawn from Dreams could be for you. 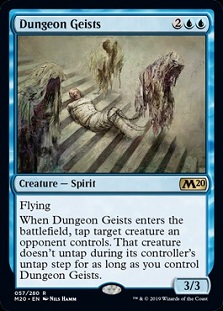 2 - Stats aren't great. Three toughness means it dies to every burn spell. Four mana means it easily gets bounced by Teferi, Time Raveler on the play or draw.

3 - A combo card if I've ever seen one. Combos well with Omniscience, someone just needs to build it correctly. Don't worry, I'm already on it!

2 - A super fun card but ultimately just worse than Teferi, Time Raveler. It also just gets shut down completely by Teferi. So, I guess if you want to play spells at instant speed, you're better off just playing Teferi.

1.5 - No artifact worth of cloning right now and two 3/3s for six mana isn't impressive. I'd keep an eye on this card in case we get an artifact set for some sort of combo but otherwise it's bulk.

3 - Playable in a fliers deck otherwise you probably want Narset. A 4/4 on turn four while still having four mana up is solid, could even see this in the Sideboard of Mono-Blue obession decks. Just don't get your 4/4 bounced by Teferi.

2 - Very much a combo card or a powerful value card. I play one in Omniscience decks in the Sideboard already to grab with Mastermind's Acquisition.

3 - Goes right into Mono-Blue and most likely the

2 - A neat counterspell but we already have over 10 playable counterspells in Standard and we can't play them because of Teferi. 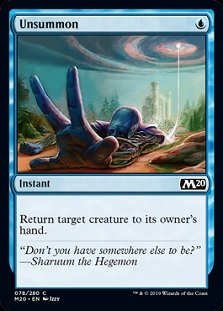 2.5 - This type of affect has always been solid in tempo decks, especially if you play creatures yourself with enter the battlefield abilities. Can also just play it in elementals to re-buy a Risen Reef or another elemental.

fliers or Mono-Blue will love this card as it's usually just a better Chart a Course. Two-mana Divination is powerful. Not as powerful as one-mana Divination like Light Up the Stage but still should see play somewhere.

Blue did better than White overall as the Top 5 cards are all maindeckable and / or cards you can build around. I'm personally excited for Flood of Tears and Drawn from Dreams. They are both powerful cards that seem to be fun!

Tomorrow we'll be going over the Black and multicolored cards!