When I was asked about writing an exclusive preview for Modern Masters 2017, I was hesitant to agree. I had just started writing an article about how bad I think most Modern decks are, so I was worried it was going to be pretty awkward if I had to hype up some mediocre creature. But after some consideration, the experience seemed too fun and unique to pass on. I was incredibly relieved when I received the card I was going to be previewing, though, because if thereâs anything Iâve learned playing Magic itâs this; if itâs good enough for Jon Finkel, then itâs good enough for me.

If you havenât already guessed it (or if you read didnât read the title), my Modern Masters 2017 preview card is Past in Flames. 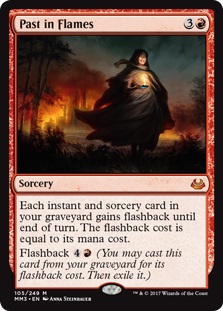 A mediocre creature; Past in Flames is not.

It may not be diverse in application, but when it comes to adding to a storm count itâs in a class of its own. Arguably one of the most powerful cards in Modern, Past in Flames has single handedly kept the Storm archetype alive throughout banning after banning.

This is the original Storm list that rose to prominence in the chaos that was Modernâs inaugural event, Pro Tour Philadelphia. From Pyromancer's Swath to comboing with Noxious Revival, there were several variations of the archetype present at the event, but they were essentially all just variations of Pyromancer Ascension decks. Turning Ascension on isnât always the fastest thing, though, and this format was all about getting your opponent dead as quickly as possible, so it makes sense that these lists consisted of more interaction than weâve become accustomed to seeing in more modern Storm lists. This iteration of Storm was short-lived though, for the format underwent a massive overhaul following this event.

After the banning of Ponder, Preordain, and Rite of Flame the future of Storm in Modern seemed bleak. Without the cantrips, turning on Ascension would be an arduous task. And without an active Ascension, generating a large enough storm count to Grapeshot a player out might has well have been impossible. But fortunately around the same time as the bannings, a certain Mythic Rare from Innistrad would be released and breathe new life into the archetype.

What I said about Jon Finkel goes for TGO as well.

This is the first version of the deck centered around Past in Flames, and it definitely resembles modern lists more than the previous iteration did. The inclusion of Past in Flames allows for the deck to be built fundamentally different. It compels you to be ritual based, as rituals synergize well with Past in Flames; allowing you to generate massive amounts of mana and storm. Redundant copies of rituals also make it easier to get Ascension going as well, but still not nearly as easily as it was with the cantrips which is likely why this list only includes three copies.

One of the biggest problems of the ritual based builds is the fact that rituals themselves just arenât very good aside from Seething Song. Only Generating a single mana, comboing off would often be difficult without an Ascension even if you did have a Past in Flames. The addition of Goblin Electromancer would severely mitigate this problem though. If a two-mana 2/2 is the only creature in your deck in the Lightning Bolt Format, it has to be pretty good. But Electromancer has definitely proven it deserves its spot alongside Past in Flames. An unanswered Electromancer can often mean game over as early as the next turn. And while itâs weak to removal, you can often just sandbag your Electromancer for as long as you need to. If they tap out, you can just slam Electromancer and start going off. And if they hold up mana for a removal spell every turn, youâll often have a sufficient amount of time to sculpt your hand and go off without an Electromancer.

Electromancer seemed to make Storm a bit too good for Wizards comfort, and once again they decide to take a swing at Storm in the form of a Seething Song ban.

Despite this injustice, our protagonist persevered.

The Seething Song ban was supposed to be the one that finally did it. The other rituals were thought to be too reliant on cards like Electromancer and Ascension to work, and the deck wasnât seeing much play for the first time in the history of the format. It seemed like the archetype was finally on its way out the door until Finkel made the Top 16 of Portland with his take on the deck. Without Seething Song, the move to the full set of Ascensions was necessary. Finkel also chose to include two copies of Increasing Vengeance in his deck to compensate for the loss of four rituals. While Storm never regained the position in the format it once had, it continued to put up solid results, and it even had the best record at the Modern PT following this GP. The deck existed in this form for quite some time to varying degrees of success and popularity. But just when things seemed like they couldnât get any worse, Gitaxian Probe was banned. This one was pretty much just collateral damage, but it hardly seems fair.

The Organized Konfusion of Modern decks; somehow, someway, Storm is still putting up results. For the first time, the deck has eschewed the Pyromancer Ascension engine in favor of Gifts Ungiven. Baral, Chief of Compliance is the Prince Po to Goblin Electromancerâs Pharoahe Monch, and itâs the combination of the two that make the Gifts package so potent. The downside of cards like Gifts Ungiven and Merchant Scroll is the fact that they cost a lot, but with eight cost reduction creatures the problem is noticeably alleviated. Turn two creature into turn three Gifts Ungiven will result in the game ending on turn four a staggeringly high number of times. This version of the deck has yet to see success on a large scale, but itâs been putting up results online for a few months and itâs definitely something to keep an eye on.

So what was the point of all of this?

Past in Flames is absurd and simply too good to ever dismiss.

The card may not be anything new, it may not be at its best right now; but, if history has taught us anything itâs that Past in Flames is always just a card away from being completely busted. That card could be Baral or it could be something that hasnât been printed yet, but either way this is a card youâd be foolish to not be excited about.