Login
0 Item
Advanced Search
Sign In
Create Account
Iâve thought about writing this article countless times, but I could never really bring myself to do it. Iâve always been rather uncomfortable when it comes to divulging my personal feelings, to the extent that most of the people I consider my closest friends through Magic could tell you very little about my life. But with this year coming to a close, the significance of this game in my life has been one of the only things Iâve been preoccupied with.

I began playing and competing in 2012, but until recently I only viewed the game as a hobby that served as a competitive replacement for sports. I enjoyed playing, competing and improving, but I didnât have any ambition or goals pertaining to Magic. Honestly, I didnât have much in terms of ambition regarding anything. I sort of just went through the motions of everything, dejected and disinterested. The last thing I had ever put more than the minimum effort required into was playing sports.

The fact that sports used to be a prominent aspect of my life is likely one of the few things most people familiar with me know. Iâve never really elaborated on their significance to me nor their relevancy in my purpose for playing Magic though. Itâs difficult for me to explain, but Iâll try and provide some context.

I grew up in a sports centric household and almost all of my earliest memories with my family pertain to sports, so for as long as I can remember I wanted to be a great athlete. I wanted to be like my brother, I wanted to be able to have a catch with my dad, and above all else I wanted to make my family proud. A rather large hindrance that stood in opposition to this though was the fact that I was born handicapped. Most doctors never expected me to be able to walk much less go anywhere near a field. Fortunately, my parents were able to find a surgeon who saw more potential in me than that. The large majority of doctors had dismissed any notions of even a fraction of my problems being remedied, but this doctor was confident there wasnât anything wrong with me that couldn't be fixed. After countless surgeries and thousands of hours in physical therapy, the gap between me and the average kid was surmountable. When it came to sports, I was at a disadvantage and had to work harder, but just knowing how fortunate I was to even be able to play never really made it feel like work.

From an early age, I played a variety of sports but I found solace in baseball above all else. I was enamored with every aspect of the game, and truthfully I just wanted to be like Jim Abbott. I spent a decade of my life practicing and refining my mechanics every day. And when I say âeverydayâ, Iâm not really being hyperbolic. I wanted to succeed as badly as I wanted to breathe, so I literally practiced every day. As I progressed, the rewards of my labor became evident. I began playing with more elite travel teams and eventually even playing up a couple age divisions. I was proud of my accomplishments up until this point, but ultimately my goal was always to receive a scholarship to a good school for playing baseball. Overcoming my handicap and having that directly contribute to my success couldnât have possibly been a more appealing concept to me. It was the only thing I wanted. Unfortunately, my dream was cut a bit short. My surgically-built body began folding to the physical demands of the game. It gradually became more difficult for me to tough out games, it took me more than a half hour to get of a car after a game, and I started missing practices and days of school because I was in too much pain to move. My doctor recommended a surgery that would prevent me from ending up in a wheelchair by the time I was 30, but it would make it impossible for me to run. It was decided that going through with the surgery would be whatâs best for me. I felt like everything I worked for was in vain and I was powerless to do anything about it.

The feeling of excelling at something youâre inherently disadvantaged in is ineffable. So thinking I had overcome adversity only to end up feeling like I had failed, was a harsh reality for me to face.

It extinguished any ambition I had, and I began to associate effort with futility. I became afraid to try because I experienced how bad it hurt to give something your all and come up short. So whether it was school, Magic, or a different area of my life, I was content coasting by on innate talent rather than working toward a goal. It wasnât until earlier this year that I was able to stray from this line of thinking.

The turning point for me was the formation of Team MGG. When I was approached about the concept alongside Jim and Dan, I was hesitant about joining. The idea was sound and there was very little risk for me to do so, but I didn't think I would be a good fit for a team. We were informed that one of the primary goals of the team was to get as many members qualified for the SCG Playerâs Championship as possible, but this was something I had very little interest in. For the two years prior to this, I had watched Jim and Dan work tirelessly in attempt to qualify and win the Playerâs Championship, and I travelled with them only when it was convenient for me to do so. The proposition of failing to qualify wasnât something I was prepared to face. But after some deliberation, I decided that this opportunity could be exactly what I needed. I was going to put my all into not only qualifying for but winning the 2016 Playerâs Championship.

When the team began competing in Season 2 of the SCG Tour, I felt as though I had found a part of myself that was lost. Each tournament had additional meaning to me. It wasnât about any one tournament, it was about working toward something larger. In the beginning of the season, I was hungry and my results reflected it. In the span of the 2nd-5th Opens of Season 2, I finished 2nd, 9th, 10th, and 2nd while going 34-2 on Day 1s. I cooled down a bit toward the later half of the season, but not enough to prevent me from achieving my goal. I finished 2nd overall in the season, and I earned my ticket to the Playerâs Championship in my first attempt. I had become estranged with the feeling, but for the first time in a long time I felt rewarded. 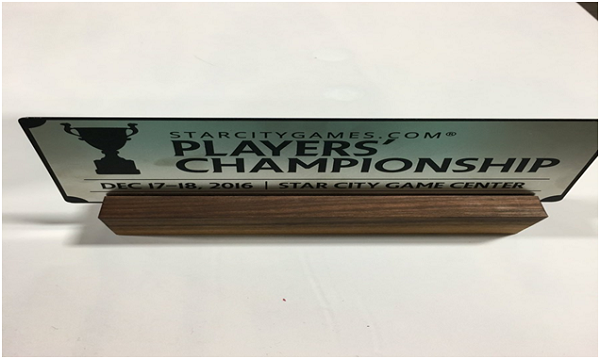 This brings me me to why I finally decided to write this article now. This is my last article that goes up before this yearâs Playersâ Championship. Itâs been a very long time since Iâve wanted anything as badly as I want to win this tournament. As of this point, Iâve played over 200 matches online in the past two weeks, and I plan on playing many more in the next two. I have countless spreadsheets recording every decklist Iâve played alongside their record in every matchup with pages of notes on each. Iâve finally reached the point where my passion for this game rivals what I once had. Failure isnât even a consideration, my sole focus is giving myself the best chance to achieve my goal.

While I would like nothing more than to win, Iâm proud of what Iâve accomplished up until this point and Iâll be eternally grateful to this game for what itâs given me. I canât say for certain what role Magic will play in my future if any at all, but if Iâve learned anything itâs to take away as much as you can from every experience in your life. Nothing in your future is guaranteed, but your experiences canât be taken away from you. So while I want to win, I wonât be disappointed in my result regardless of my placing. Iâm just grateful that I get to play this game, that I get to compete in this tournament, and that I still get to put on my #25 jersey just like Jim Abbott.