In this experiment, we discover the villainous wealth of the ancient Sultai after frantically searching through the bubbling muck.

Tasigur, the Golden Fang, forthcoming in Fate Reforged, has received quite a bit of press for his potentially-Tarmogoyf-like stats and value-generating activated ability. Whenever a card fills a graveyard or lets me reuse lost cards, my combo senses start tingling, and Tasigur does both. 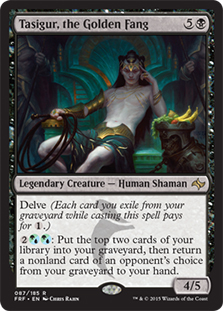 Now, when we activate Tasigur, an opponent is the one who is able to choose which card we take back. However, the player canât make us take a land. Tasigurâs own delve can help curate the graveyard such that only the best options remain, and people have picked up on that already.

What I want to do, though, is take that to the extreme. I want to get what I want back, so I will go to great lengths to raise the potential of my doing so. Since Tasigur doesnât touch lands, all we have to do is run a ton of lands. That way, there are great odds that when we want a particular card back, weâll be able to do so despite our opponentâs opinion.

Incidentally, there happen to be other synergies that want to be played in decks with a lot of lands. Today, weâll be using Treasure Hunt and Zombie Infestation. Decks have been built around those two cards because in a deck full of lands, the Treasure Hunt can fill our hand, and then Zombie Infestation can turn those lands into Zombies.

With Tasigur, we can cast Treasure Hunt, and when we activate the Sultai Shaman, weâll have reasonable odds to gain the Treasure Hunt back and draw a bunch more cards. Today, I want to put together a Commander deck featuring Tasigur, the Golden Fang with those synergies and more. Of course, playing singleton means reducing our combo consistency due to the Highlander nature of the format, but donât worryâwe have other treasures in store.

Tasigurâs activated ability becomes especially interesting once we reach a point at which we can activate it repeatedly, recasting the same card each time. Of course, the mill-two clause means there will almost always be the possibility of us âmissingâ the Regrowth on the card we want. But the more lands we have in our deck, the better chances we have of continuing our loop.

The question then, once weâve decided weâll have a lot of lands in our library, is how to actually enable a loopâinterruptible though it may be. A go-to option for looping spell-casts is the untap-some-number-of-lands cards, such as Palinchron and Snap. For this deck, I think the best option is Frantic Search, though Iâve included Snap and Cloud of Faeries as well. (Though you could consider Palinchron for your own build, as it combos nicely with another card in a moment.)

Well, with a couple resolutions of High Tide, those lands will tap for 3 each, netting us 2 mana in the loop. Netting mana is always nice, as it will allow us to do plenty of other thingsâincluding compensate for the times when we mill into nonlands and our opponents force us to pick up cards that arenât Frantic Search.

Oh, and this sectionâs heading was âRepeat Ad Nauseam.â I didnât mean that weâd repeat casting Ad Nauseam. Really, the heading had nothing to do with the card Ad Nauseamâexcept the card name. I just meant weâd be repeating something a lot, and it would make our opponents sick. But Ad Nauseam is quite good, and it can let us draw a ton of cards, especially in a deck with a ton of lands (and combo pieces). So yeah, weâll be running Ad Nauseam as well. But that has nothing to do with this subheadingâor at least it didnât until I wrote this paragraph.

How to Do It

Iâm going to try to cover a few tip on how this deck can work out in practice. First, hereâs my list:

First of all, we could win with just Ad Nauseam (or maybe Treasure Hunt) and Zombie Infestation. Iâm sure there are several hidden interactions that could be exploited to victory, especially with Tasigur around, allowing us to repeat key, powerful interactions.

But really, we want High Tide, and we want Frantic Search. The deck has a lot of Islands to work with High Tide (and a lot of blue spells to work with the Islands). Bubbling Muck is a black alternative, and Urborg, Tomb of Yawgmoth can make all our lands Swamps, so that can work nicely, though weâll still need plenty of

for activating Tasigur and casting our spells that untap lands.

The deck has a bunch of tutors to help us find the things we need, providing redundancy when we might only draw a couple nonland cards. Dizzy Spell, Muddle the Mixture, Drift of Phantasms, and Brainspoil will transmute for High Tide, Treasure Hunt, Frantic Search, and Ad Nauseam, respectively, though there are plenty of other choices. Expedition Map can find Urborg, Tomb of Yawgmoth, as can Tolaria West, and Tasigur can return those tutor cards (with the exception of Tolaria West) for repeated use.

When we actually start looping Frantic Search or Snap with Cloud of Faeries, we could easily win with something like Tendrils of Agony. That would be the perfect finisher. I, however, prefer things a little weirder. Iâve included four less efficient options.

The first is Villainous Wealth. Fitting in that itâs a Sultai card for a Sultai commander (both in theme in addition to colors), we can use this with infinite mana to, essentially, mill all our opponents (by repeating castings of it with Tasigur). Also, weâll have all of everyoneâs toys to play with, though theyâll probably concede rather than let us spread their cards out onto our side of the battlefield. We could also just hit each person for 10 or so, just to see what happens.

Second is the already-mentioned Zombie Infestation. We can draw our library and make a swarm of Zombies. And I havenât mentioned it yet, but the list did include Elixir of Immortality, so we have the power to loop our library. We donât have to run out of cards, as once we start Frantic Searching over and over again, there will be an Elixir in there somewhere, which we can use to go for as long as we like. 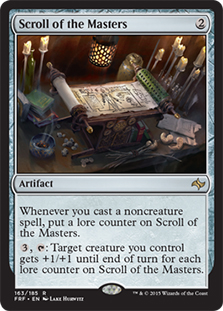 The third option is the new Scroll of the Masters. Like stormâor a Storm Entityâin a bottle, this can make a targeted creature extremely large once weâre casting any number of spells. This thing can make Tasigur lethal in one swing pretty easily once weâre comboing, and this is my favorite choice for killing opponents with this deck.

Finally, we have option number four. This one is kind of part of the above three, especially the Zombies and the Jeskai-leaning Tasigur. With the Zombies, weâll need to end their summoning sickness, and with a massive commander, weâll need multiple turns to take out multiple opponents. Time Warp is a pretty easy answer there, and because it doesnât exile itself the way Temporal Mastery and Fate Reforgedâs Temporal Trespass do, we can repeat it with Tasigurâs superpower. This is also a kind of standalone option, as, given enough turns, we can probably find a way to kill everyone.

If you have a thing for shirtless guys with a whip, if youâve grown nostalgic for casting Zombie Infestation and Treasure Hunt, or if you just want a Commander deck with even more lands than my Jolrael, Empress of Beasts Commander list, give this deck a try.