In this experiment, we retreat again, only to find things just as perilous. 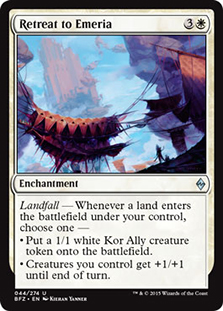 Last week, we built a deck around Retreat to Kazandu, using the +1/+1 counters it generated to pump up Fertilid so the Elemental could search up lands, which would be untapped by Amulet of Vigor so the land could tap for double its mana with Vernal Bloom so we could repeat the process. The deck had a bunch of redundancy and non-combo ways to benefit from landfall and the various combo pieces.

This week, weâll be working with another of what appears to be a cycle in Battle for Zendikar: Retreat to Emeria. Instead of giving us the modes of a +1/+1 counter or 2 life, the white Retreat gives us the modes of a 1/1 Kor Ally or +1/+1 to all our creatures until end of turn. Last week, I asked myself with Retreat to Kazandu whether I could turn the +1/+1 counter it gave me into a new land in order to gain another +1/+1 counter. With the convoluted series of events recounted in the previous paragraph, I was able to do so. So letâs ask a similar question with Retreat to Emeria.

Since Retreat to Emeria gives us a Kor Ally for a land, can we find a way to make a Kor Ally give us a land? It turns out this oneâs actually easier. Perilous Forays costs only 1 mana to activate, so with Amulet of Vigor, we have a three-card combo that will let us pull all our lands out of our deck. Just play a land for turn, make a 1/1, and pay 1 with the land and sac the 1/1 to find another land, which will untap due to the Amulet. Tap the land for mana to sac the 1/1 and find another land, and repeat. With other landfall effects, another copy of Retreat to Kazandu, or the like, we can actually start to benefit from the loop.

I donât love Amulet of Vigor. Thatâs kind of hard to say. Itâs a great combo enabler, and I love combos. Itâs what enables one of the few combo decks in Modern that havenât been banned out. I really feel that I should like Amulet of Vigor. And I do like what it does. The problem is that it doesnât do anything on its own. I really prefer my cards to do at least a little bit of something else, even itâs just be a crappy creature. The Amulet just sits there and waits for us to break it. With that in mind, I tried to cut some Amulets. Here are some other cards that will make up for it.

Lotus Cobra â The Cobra does most of the work of the Amulet (in this deck) while also being a Goblin Piker. Whenever one of our lands enters the battlefield, we wonât need to untap it in order to tap it for mana since Lotus Cobra will just give us the mana straight-up. If we happen to have the Amulet as well, these kinds of redundancies will start giving us extra mana to work with so we can start emptying our hand.

Devoted Druid â This doesnât replace Amulet of Vigor in the same way, as it has a life expectancy. Every time we reuse it for mana, it becomes smaller, and we can only overcharge it once. However, if we have Retreat to Kazandu in addition to whatever weâre using to loop, we can put +1/+1 counters to negate each -1/-1 counter we give it so we can start making extra mana. And if we have an extra Retreat to Emeria and weâre giving all our creatures +1/+1, we can turn those bonuses from the Elf into mana. Of course, it will die at the end of the turn when the bonuses go away but the -1/-1 counters stay, so make good use of that mana.

Retreat to Emeria is what we need in this deck to create a loop, and additional copies start giving us great benefits. If we have Retreat to Kazandu, we can benefit from that as well, either with life or by permanently pumping a creature. But here are a couple other cards weâll hope to have lying around the battlefield.

Emeria Angel â Does the ability, âLandfall â Put a 1/1 creature token onto the battlefield,â look familiar? Itâs on Retreat to Emeria, but itâs on this Zendikar classic Emeria Angel, tooâand these fly! This can be used as a straight-up replacement to the Retreat when performing our loop (it turns out I could have been performing this combo for years!), but preferably, weâll keep its Bird tokens while sacrificing the ground-based Kor Allies.

Windrider Eel â Last weekâs threats, including Vinelasher Kudzu, could work just as well here, but this time, I decided to go with this common. Steppe Lynx started out in the list, but I was worried the little guy wouldnât be able to hold up the aggression and that a more evasive, reliable threat like the Eel might work out better.

Allies â With Battle for Zendikarâs return of Allies, weâll have new synergies for combining new cards with old. Retreat to Emeria is the beginning of that, and with repeated Ally enterings of the battlefield, something like Oran-Rief Survivalist or Turntimber Ranger might work great. I decided not to include either, but theyâre something to keep in mind.

Clever Impersonator â Perhaps this should be included in every one of this deckâs categories due to its versatility, but I stuck it here. I considered Copy Enchantment as well, to serve as additional copies of the Retreats, but the Impersonator is much more versatile, letting us make more Emeria Angels or Windrider Eels or just impersonate an opposing threat.

Vitu-Ghazi Guildmage â I wanted to make sure we had something to do with all this mana. Last weekâs deck had the endgame threat of Baru, Fist of Krosa, but this week, I went with this Guildmage. If we make excess mana through Druids and Cobras while comboâing, we can start making Centaurs or extra Birds or Kor. And if we put all our lands onto the battlefield early, this will provide us with something to do with all those lands while we close out the game.

Clearly, weâll need a lot of basic lands, as thatâs what Perilous Forays will let us search for. And if we only have a few, comboâing off wonât feel very satisfying. However, playing just basics in a three-color deck probably wonât work out great, especially with a lack of mana-fixing spells like Rampant Growth.

The Karoo-style lands from the original Ravnica blockâAzorius Chancery, Selesnya Sanctuary, and Simic Growth Chamberâare easy choices, as they work great with Amulet of Vigor and with landfall. With Amulet of Vigor, we can circumvent their drawback by immediately gaining the 2 mana they tap for, and since we can tap the previous land before we return it to our hand, we can generate 3 mana on turn two after a turn-one Amulet.

With landfall, these cards effectively give us an extra trigger, as we return a land to our hand when we play them, readying that land for a future turn and another triggerâor set of triggers.

Even without synergies, the Karoo lands are strong because of the extra mana they create. Most lands tap for only 1 mana, so a land that taps for 2 mana functions as two land cards, which is essentially card advantage. I like to think of these lands as Divinations that I only had to pay 1 mana for (because of their entering the battlefield tapped). And thatâs not even taking into account the color-fixing they provide.

Of course, they do come with downsides. They slow us down, as all enters-the-battlefield-tapped lands do. Against land-destruction spells like Stone Rain, we can be set way back with their destruction. When oneâs destroyed, we only lost one card, sure, but weâll have to spend a turn recouping the land play. Finally, an opening hand with only these types of lands isnât keepable, as weâll literally have no way to put land onto the battlefield and have it stay thereâwe need at least one other land to start with.

And thatâs the list! So if you needed more vigor, if you love Perilous Forays, or if you just want a retreat, give this deck a try.