Iâve been seeing a lot of Tiny Leaders decklists thrown around lately, so I figured it was time for me to get in on the action. One thing I love about Magic is that it is many games rolled into one. I also really enjoy exploring new formats and seeing what types of decks can be built following a new set of restrictions (they really do breed creativity). One additional restriction I always place on myself whenever I am putting a new deck together is one based in flavor. My decks always need to follow some sort of Vorthosian idea or goal. Call it a character flaw; I wonât mind.

For those of you who don't know what Tiny Leaders is, you can follow this handy link and brush up on your knowledge. In short, Tiny Leaders is basically Commander with the following added restrictions: 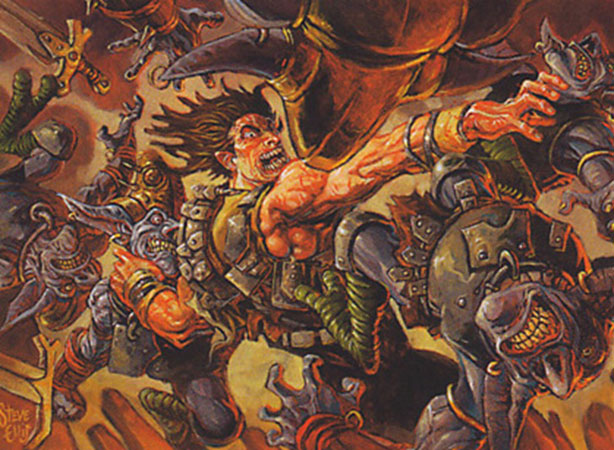 "I hope to have such a deathâlying in triumph upon the broken bodies of those who slew me."
âRadha, Keldon Warlord

A Brief History of Ant

In the years I have been collecting Magic: The Gathering cards, there has only ever been one time when I completely left the game. Like a lot of other players, it was during the high-powered environment of Mirrodin block. Unlike most other players, my reasons for leaving had absolutely zero to do with the degenerate state of competitive Magic. In order to understand why that is, you need to know three things about me.

I had a chance encounter with Magic when I was six years old, and I immediately began to slowly collect cards here and there when money would allow. I was completely drawn in by the art, and I loved to read about all the different cultures and worlds contained within the flavor text. I had no friends who played, and I was not allowed to use the Internet to find out how to play (I'm not sure I even could have at that time). I continued collecting strictly for the art and story aloneâuntil a time when I was twelve, when I bought a starter box set complete with a CD-ROM that taught me how to play. I tried to teach my friends and get them interested, but everyone was too busy collecting PokÃ©mon cards, so I used to make decks and play against myself in my bedroom. Seriously. I had no connection to the Magic community, so I had no idea how easily I could have just gone to a game store and found other people to play against. 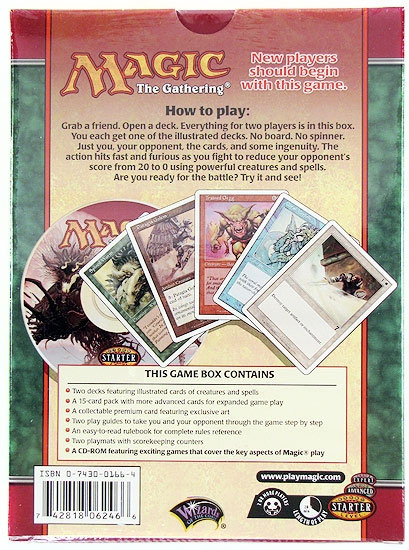 So now imagine itâs 2003. Mirrodin block is in full swing, and young Ant is a freshman in high school. Again, none of the kids in my grade at my new school playedâor even really knew what Magic was when I would ask (Dauphin County must have been a Magic black hole back then or something), so I had a decision to make. Do I keep spending money on this collecting thing, playing against myself in my bedroom, or do I use that time and money on more important things (like going to the movies and holding hands with girls). I decided enough was enough, and I stopped collecting.

Now imagine itâs 2006. Ant is a freshman at Villanova University, living in a dorm with two roommates. I had not been collecting Magic for four years, but I still kept up with a few articles on the Mothership (mainly Making Magic and Taste the Magic), so I wasnât completely out of the loop. A commercial came on our tiny little nineteen-inch dorm-room TV advertising a Time Spiral prerelease happening at the Philadelphia Convention Center. To this day, I don't know what it was that made me want to go to that prerelease. Maybe it was knowing Villanova is a short train ride outside of Philly. Maybe it was my newfound sense of freedom that only college can bring. I have no idea, but whatever the reason, I was determined to finally find out more about this game.

âIâm going to go to that,â I said aloud, more to myself than to anyone else in the room.

My heart literally skipped a beat. No joke. I had expected the same reaction of cluelessness I always received whenever I brought up my strange hobby. A million thoughts started rushing through my brain. Was he about to make fun of me? Was I about to be labeled the dork/geek/weirdo yet again? Why oh why did I say that out loudâ.â.â.â

I would go to that prerelease with Ray, have literally one of the best experiences I have ever had playing Magic, and even later go on to find out that half my dorm floor also played Magic. We would have tournaments in the common room every Wednesday, and it was some of the most fun I have had in my life. I finally had friends whom I could talk to about Magic, and I was learning how to really play the game: important things, you know, like the stackâor âfirst-in-last-out rules,â as my dormmate Sean called it. I could not have been happier. Then, one of my dormmates introduced us all to World of Warcraft, and letâs just say we all became really âbusy.â You know, with schoolwork and stuffâ.â.â.â

Anyway, my point in all of this is that Time Spiral block has a lot of meaning for me, as it not only was a block centered around nostalgic cards that referenced all of the characters I had collected throughout my childhood, but it was also the first time I had friends to play against. And who, might you ask, was my favorite character from that block?

The most bad-A chick ever, thatâs who.

"Run home, cur. I've already taken your master's head. Don't make me thrash you with it."

Tiny Leaders offers Vorthoses who are like I am an interesting opportunity. You see, when I build a deck, it is always about flavor first. When I make a Commander deck, like this Tasigur list I showcased a few weeks ago, I always try to pick cards that fit the flavor of the deck. A problem I often run into with Commander is that I can bring together a solid group of cards, but I then have to stretch my theme a little bit in order to make a hundred-card singleton list work. This leads to creative solutions like including a subtheme of âharvestâ or âanimals found in the jungle,â as I did with the Tasigur list. Tiny Leaders, being a fifty-card format, allows me to create decklists for much more restrictive commanders in terms of flavor.

When I first heard about the format, I knew right away that I wanted my tiny leader to be Radha. I have tried building Commander decks for her in the past, but they often needed to stretch too wide for my Vorthos liking. For those of you who may not know, Radha is a half-elf, half-Keldon warrior who is a straight-up brawler. Her flavor text quote above says it all: She has an in-your-face attitude and takes no prisoners. She was a major player in the Time Spiral storyline, and she is currently the leader of a small movement of elves and humans who are attempting to restore Keld to its former glory. I wanted to build a deck that showcased Radha as she might be today, a fearsome warrior leading a band of elves and humans on a quest for glory. 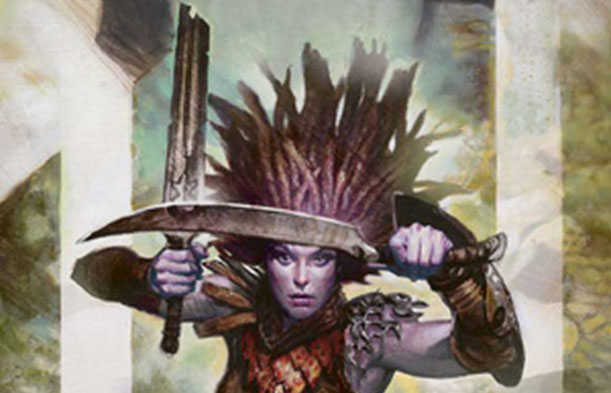 What flavor is being portrayed in the list above? In order to help illustrate the Vorthosian fury Radha is packing, I again enlisted the aid of @CMDTower on Twitter. If you do not already follow him, definitely do so! @CMDTower provides a stream of excellent infographics based on everyoneâs favorite format, including the ones he created for me that are shown below.

Batting first, we have Radhaâs band of elves and humans. All of these creatures have names that would make them reprintable on Dominaria (Radhaâs home plane). 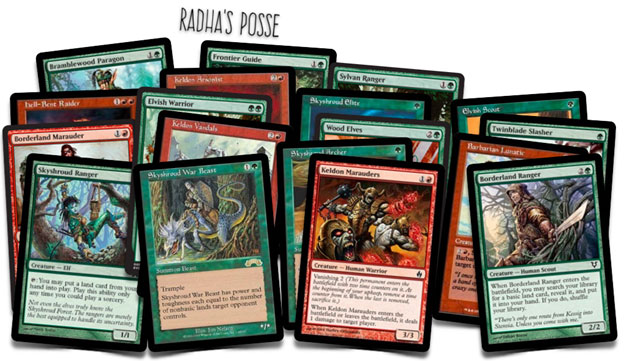 Up second, we have an assortment of spells meant to represent Radhaâs uncompromising fury and battle prowess. My favorite of these is Final Fortuneâif anyone would risk it all for one more powerful attack, itâs Radha. 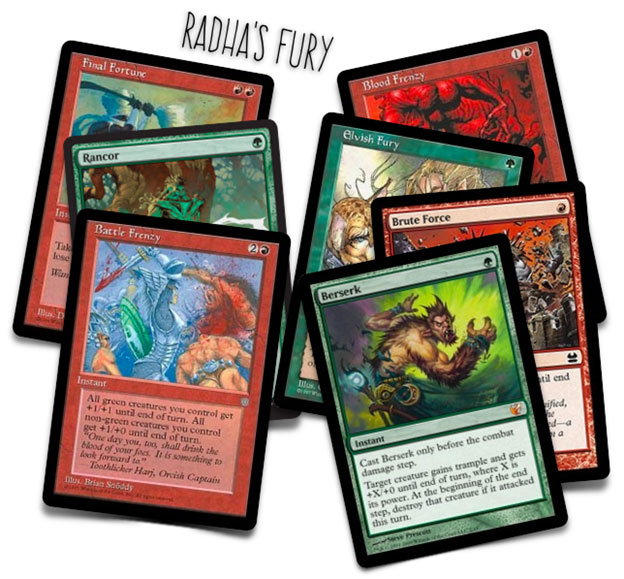 In the 3 slot, we have Radhaâs Equipment. I couldnât see her as being a fan of super-heavy armor; sheâd value anything that let her hit hard and fast. 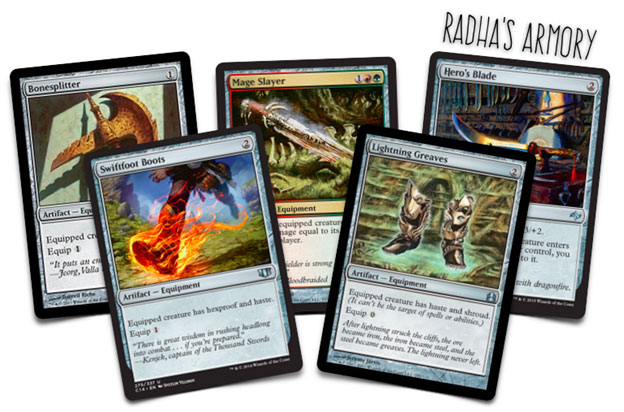 Batting cleanup, we have Radha herselfâand the two cards that either depict her in the art or quote her in the flavor text. 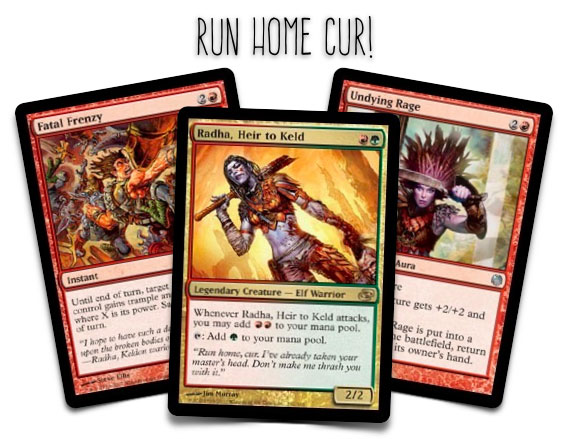 With this flavorful deck, you want to hit fast and hard, just as Radha would have wanted.

I hope you enjoyed this flavorful take on Tiny Leaders, and as always, thank you for reading! I used to think I would never have a friend who was interested in Magic, and now I am able to share my passion with you all every week, which makes me smile a big smile.

Never forget that Magic is a game, and games are meant to be fun. If you are not having fun, you are doing it wrong!

Also, if you are equipping Emrakul, the Aeons Torn with Lightning Greaves, you are doing it wrong in my book, but that is a topic for a different article.

The votes are in, and the winner of my flavor-text-writing contest was:

It is beyond dragons to comprehend the idea of âenough.â

That was submitted for the card Greed by James Bennet. Congratulations, James!

James will receive one of the duel decks featured in my article, along with four copies of the card Greed, altered by me to show Auriferous vegging out on his super-sweet pile of shiny things. 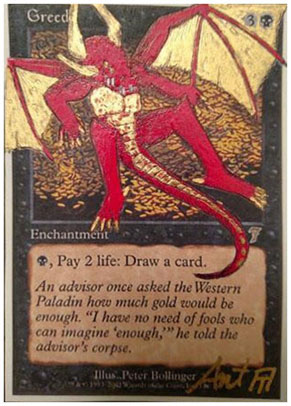