Elder Dragon: It is a term that is synonymous with unparalleled power in the Magic Multiverse, and its use as of late has caused some mixed emotions across the community. Dragons of Tarkir preview season is in full force, and to kick off Christmas in February, we were introduced to the latest incarnation of Tasigurâs favorite brood leader. 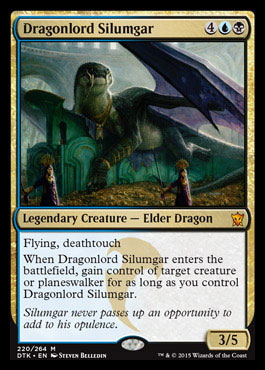 Sure, the community was excited about the return of the Fate Reforged Dragon, and yes, fans enjoyed discussing Silumgarâs massage chair-like throne, and of course Twitter was riddled with discussions about his choice in jewelry. All of these details are glorious flavor nuggets that any Vorthos would love, but there was one item that lit up social media on Mondayâone fact that had numerous questions thrown out across the Internet searching for answers:

What was all the fuss about? Why is this such a big deal? What is an Elder Dragon? All of this and more will be covered in todayâs article.

The Power of Nostalgia 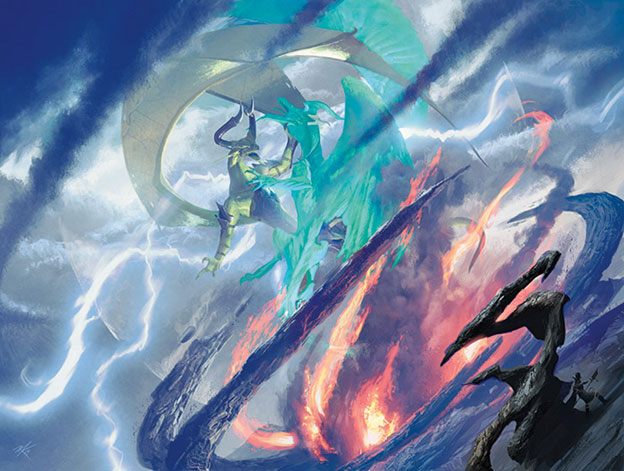 Back in January, we were in the middle of Fate Reforged preview season. As usual in any preview season, the first Wednesday brought us the âPlaneswalkerâs Guide to Fate Reforgedâ in place of our normally scheduled Uncharted Realms program.

The article introduced us to many new facts about Tarkir, but there was one piece of information in particular that spiked everyoneâs interest: a single header that had everyone talking.

This part of the guide was referring to the epic battle between Nicol Bolas and Ugin and was supposed to be the vital turning point that Sarkhan used to form his new grand version of Tarkir, but all anyone wanted to know was whether Ugin was also an Elder Dragon. This led to senior creative member Doug Beyer answering one of what I am sure were a million questions sent to him about the subject on his tumblr A Voice for Vorthos. 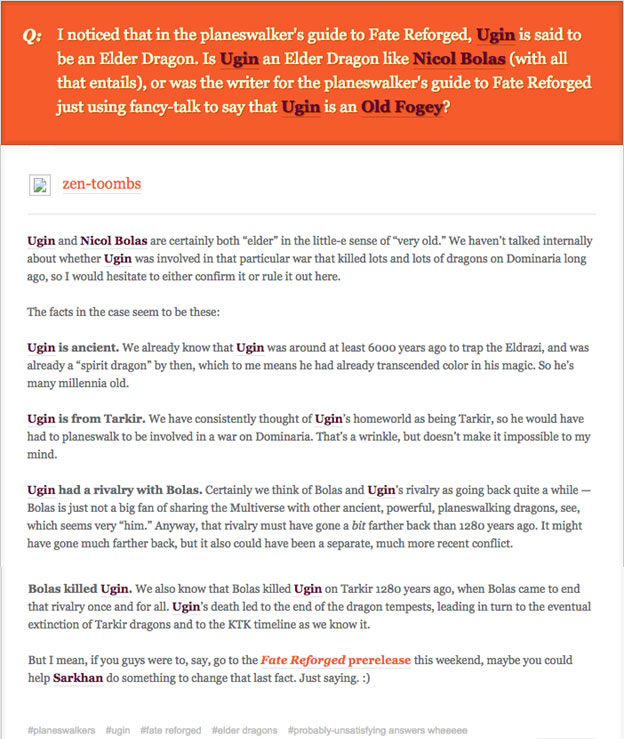 Why did Doug feel the need to answer this question, and what was this âDragon Warâ he was talking about?

The full, detailed Spike Vorthos answer can be found here. For those of you looking for the basic notes, the Elder Dragons were a race of ancient dragons rumored to be as old as the Multiverse itself, whose powers rivaled the old-school, godlike Planeswalkers. One thing that becomes confusing with the old lore is that the word âDominariaâ and âDominiaâ often are confused. Dominaria is a plane and has been the setting for many blocks in Magicâs history. Dominaria was also considered to be seated at the âcenter of the Multiverse,â and because of this, the Multiverse was often referred to as Dominia. The Elder Dragons were considered to be from Dominia and could be compared to the Eldrazi in terms of scope.

The Elder Dragons took part in some of the chronologically oldest Magic loreâperiod. The event is known as the Elder Dragon Wars, a catastrophic event from which only five Elder dragons were said to survive. 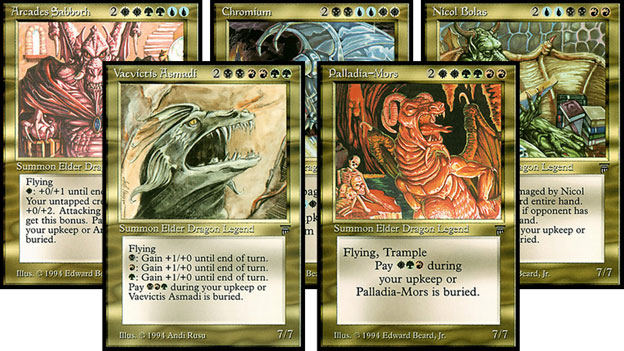 These five survivors were depicted in the above cards from the Legends expansion (one of which is our buddy Bolas).

So you can see why players who follow the lore of Magic were confused by this statement that the battle between Bolas and Ugin was a fight between Elder Dragons. Bolas, we know, definitely was one, but Ugin (as far as we knew) was not.

This is most likely why Doug found it so important to make sure that the question of whether Ugin was an Elder Dragon was answered on his tumbr. I for one absolutely love to see the old lore intermingled with our current storylines, and I would not be upset at all to learn one day that Ugin was in fact an Elder Dragon who battled with Bolas on Dominaria many millennia ago.

Out with the Old, and in with the New

Now we find ourselves in Dragons of Tarkir spoiler season, and we see that Silumgar has the type line of Elder Dragon. Now, Magic has seen many cycles of important Dragons over the years, many of which have been multicolored, intelligent, and central to the storyline of the blocks they were featured in, but never have we seen any Dragons with Elder as a creature type since the original Legends five. 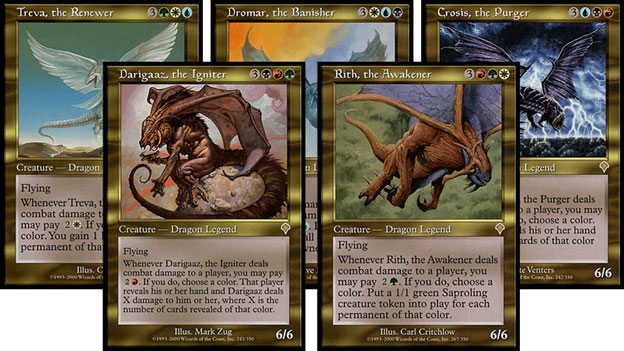 â.â.â.âNever, that is, until now. So why the use of Elder? Why makes the five Dragonlords of Tarkir Elder Dragons? The Question again was posed to Doug on his tumbr, to which he answered: 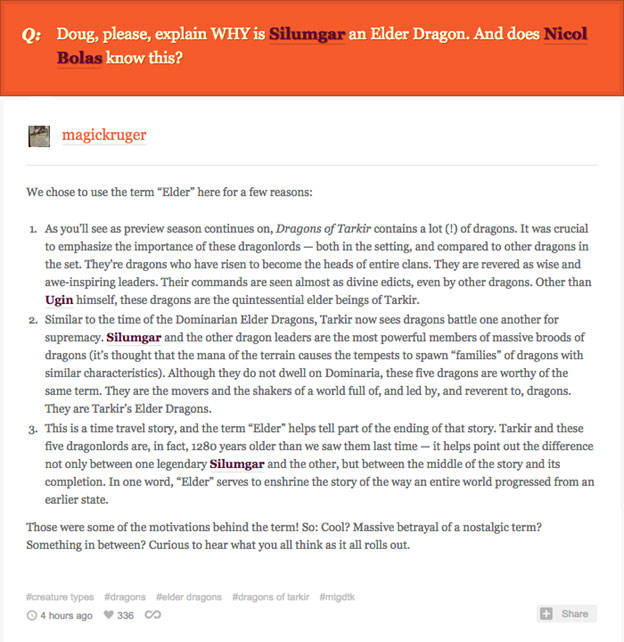 The Elder Dragons from Legends are some of the most beloved characters from Magicâs past, and the story surrounding them is a longtime fan favorite. (I mean, who wouldnât love a gigantic war between godlike dragons?) Using the Elder type in the way that R&D did in Dragons of Tarkir carried a huge risk of potential backlash from fans of these characters and stories. Dougâs Question, âIs this a massive betrayal of a nostalgic term?â is serious in that they definitely took a risk in choosing to make use of this long and forgotten type. However, without risk, there can be no reward, and I for one am extremely excited to see the old term put to use again. I think the use of Elder was not only an incredibly smart and simple way to show that the five Dragonlords have progressed over one thousand years in Tarkirâs timeline, but it was a great opportunity to reward longstanding players that was expertly recognized by the people making the game. It was a risk, and I think it was a risk that paid off.

If social media has been any indication, there are a lot of other Vorthoses out there who are happy as well.

I, for one, welcome our elder dragon overlords and would like to mention that I can round up humans to toil in their sugar caves

If you are a Vorthos who has been a fan of the lore for years and really enjoyed seeing this nostalgic throwback, please let Doug and the rest of the creative team know. It has been proven to us time and again that R&D not only listens to, but responds to, the feedback of Magicâs fans. It is important that they know whether things like this are successful so that they can continue to try new ways of referencing old cards and lore in the future.

And as Aaron Forsythe clearly pointed out on Twitter, don't be rudeâinclude Elder Spawn in your conversations about Elder things. Sheesh. I mean, come on, community, you know better!

I mean, while we're calling out "Elder" versions of things... http://t.co/8HB1PSYtaH

Until next time, may your fondest flavor memories be revisited.