Welcome back, everyone! Last time, I presented you all with four different creature options for each of the five colors that we could use as iconic creatures in our world. The community has spoken, and the results are in. Allow me to introduce you to the five iconic creatures found on our dream world:

All of these decisions are now present on our Live Google Doc.

Before the Mending rewrote what it meant to be a Planeswalker, one such being had its spark ignite. This newfound Planeswalker put itself under a powerful spell, causing itself to enter a deep slumber while its body drifted through the Blind Eternities. Once asleep, the Planeswalker drifted into its own mind and created an entire world within its dreams. This plane contained within the mind was stable at first, but when the sleeping Planeswalkerâs spark felt the effects of the Mending, everything began to change. As the sleeping Planeswalker became more mortal, its ability to properly stabilize the plane slowly began to diminish. Today, we will vote to determine exactly who that Planeswalker is. We will vote on why this Planeswalker is drifting through eternity in an endless sleep, and we will vote on the exact cause of the magical slumber.

A few weeks ago, I asked you all to head over to the #GMWMTP subreddit and discuss ideas for exactly who our slumbering Planeswalker is. There were some great ideas thrown around and some even better discussions. If you still have not at least checked out the subreddit, please do so! All ideas are welcome, and often, the best ideas are born out of the discussion. I am going to present a few different options of our Planeswalker below. For each, I will outline a general idea for who the Planeswalker is followed by a couple different story ideas that would represent exactly what caused that Planeswalker to create the dream world. At the end of the article, we will put it up to a vote and ultimately decide who the dreaming one is.

Disclaimer: These versions are by no means tied to their genders. What is important is the overall story behind inducing the sleep and creating the plane. If we would like, we can very easily change the gender from female to male (or girl to boy) at a later time.

Dreams of a Child

Our first option presented today is the idea that the sleeping Planeswalker is a small child around the age of ten. Her dream world is bright and beautiful, filled with creatures inspired by the stories and fairytales told at her bedside when she was young. The nightmares that begin invading the plane are dark and foreboding, creating a visual contrast with the surrounding world and representing all of the young girlâs darkest fears. 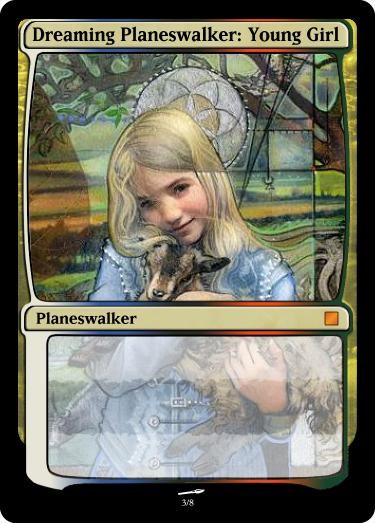 Our young Planeswalker is a talented mage born with powerful magical abilities. In order to protect their child from falling into the wrong hands, her parents hid her powers. Word somehow reached the government of this girlâs potential, and agents were sent to take her in order to study her powers and how they could be used against the enemies of her nation. When the soldiers arrived to take the girl away from her parents, she inadvertently released a large burst of power, destroying soldiers and decimating her home (and her parents). Mortified, the girl looked at the destruction she caused and fell to the ground as her pain ignited her spark. The first planeswalk did not complete, and the girl found herself drifting through the Blind Eternities. Horrified, she reverted into her own mind, inducing a coma-like sleep on herself, and she began recreating her home world within her dreams. Her new home is a dreamlike mirror of what her real home used to be, populated by beings inspired from her favorite fairytales told to her by her mother.

The young Planeswalker was just an ordinary girl living with her grandmother in a small cottage on the western edge of a large forest. One night, as she was heading home with a basket full of ruby-red apples she had picked for her grandmother, the young girl was attacked by a band of hungry werewolves. The event was so traumatic for the little girl that it caused her Planeswalker spark to ignite and sent her into a comatose state. Now her body drifts through the Blind Eternities while the young Planeswalker adventures through a plane within her own mind. Her new home is a dreamlike mirror of what her real home used to be, populated by beings inspired by her favorite fairytales told to her by her grandmother.

Dreams of an Adult

Our second option presented is that the sleeping Planeswalker is an adult female. These versions deal with real fears and loss and could potentially add a darker tone to the dream world that we ultimately create. 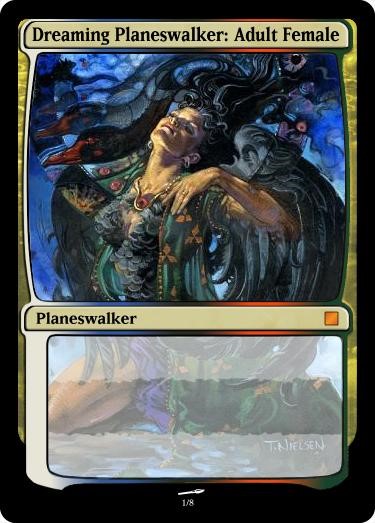 Before the Mending rewrote the definition of a Planeswalker, this powerful mage was a master of the mind. A Planeswalker who desperately wanted to understand the nature of her existence within the Multiverse, she would travel to distant planes in search of clues that would help define her existence. Having created her own countless summonings of various creatures, she became obsessed with the fear that she was just a summoning of some more powerful entity. She started to see herself as just an idea within the mind of this ancient being. To test her theory, she induced a powerful sleep spell on herself. As the slumber began to take hold, she cast a powerful enchantment that would allow her dreams to take shape as a physical plane within the Multiverse. She spent eons within her own mind, crafting a beautiful world of dreams inspired by childhood fairytales. Now she lives out a life within her own dreams, the effect of the powerful sleep spell causing her to forget that the world is not realâand that she is actually dreaming.

After eons of walking the Blind Eternities, this Planeswalker had finally found a way to return to being mortal. Planning on living out the rest of her life with the man she loved, this Planeswalker returned to his home plane. She arrived to find that the plane was nothing more than a decaying husk, having been ravaged by some outside force. Seeing the destruction that was to serve as her home, and finding the blasted skeleton of her love, she desperately tried to leave the plane. Something went wrong with the planeswalk, and now her body floats through the Blind Eternities while she continues to live within her own mind. A dream world created from memories of her former home, she lives on in a place where she can be with her true love forever.

This Planeswalker is a master artisan from a plane where those who can create beautiful works of creativity are praised above all. When his Planeswalker spark ignited, he was ecstatic. Seeing so many vastly different additional worlds allowed him to rapidly improve his creative genius by drawing on experiences within those worlds. To his horror, the people of his home plane scoffed at his greatest creations, unable to understand the references behind his beautiful works. In his desperation, the man turned to the only audience that would be able to appreciate his art: other Planeswalkers. Inducing a sleep upon himself, the man created a beautiful world within his dreams. By making his own pseudo-plane, he guaranteed that only those with his gift and understanding would be able to visit the world and marvel at his work. To him, his plane is his greatest work of art, his masterpiece. Now something has begun to pollute his creation with ghastly nightmarish fiends, which he believes is causing the plane to become unstable. The man works to ensure that the nightmare threat is neutralized and that his masterpiece will continue existing at all costs.

This Planeswalker has ancient and powerful information stored within his mind. A dangerous enemy has been pursuing this man through the Eternities in order to rid him of this informationâand his life. Fearing that the knowledge will fall into his enemyâs hands, the Planeswalker has induced a powerful sleep spell upon himself. Taking up asylum in his own mind, the âWalker constructs an entire plane of existence within his dreams to hide in from his enemies. As the nightmares begin to invade the world he created, the Planeswalker knows that his ancient enemy has finally found his hiding place. However, he is not afraid, for he has been preparing for this inevitability for what has seemed like millennia. Now he prepares himself for a final showdown on a plane created from his own mind.

On the #GMWMTP subreddit, we have been discussing the origin of the nightmares that are invading our plane. I would really like to take one more week and keep that discussion going. If you have not checked it out yet, I urge you to head over to the subreddit and voice your opinion on what you think is causing the nightmares. The more involvement and discussions we can have about these abominations and their source, the better.

The second challenge goes out to the artists out there. Now that we have determined what our five iconic creatures are for the dream world, I would like to ask you all to submit concept art for those creatures. What do you think the guardians, flying Whales, Nightstalkers, Phoenixes, and Colossi look like on our world?

Last, I would like to give these flying Whales of our world a name. Please submit ideas in the form below, and those that fit the setting best will be selected to be voted on by the community!

Thank you so much to everyone who has been involved in this project so far. The content we are generating is more than I could have hoped for, and as always, I look forward to seeing the results of these polls and the world we will ultimately create together.