Today, we are going to talk about anthropomorphic races in Magic. If you are a creative goober and enjoy delving into the creative goodness craved by your inner Vorthos, buckle up because this article is for you.

Google, what does anthropomorphic mean?

To make this even simpler, an anthropomorphic humanoid is a fantasy race that is an animal given humanlike qualities.

Seems simple enough, right? But things get tricky when you have to define your newly created raceâs type line as it will appear on a Magic card.

It all started when Great Designer Search 2 finalist Jay Treat posted the following on Twitter:

Intrigued by this question, I posted the following in reply:

This sparked the following conversation:

The confusion lies in the fact that, for the Khans of Tarkir block, Wizards of the Coast printed cards representing anthropomorphic snakes, elephants, birds, and hounds. Of those races, two of them were never seen before in Magic. One race was given the type Hound after the animal it represents, and one of them received its own creature type (Naga). What is it that made the Naga so special? With todayâs article, I will try to answer the following question: âWhen should an anthropomorphic race be given its own creature type, and when should such a race use the type of the creature it represents?â

The Same Organic Matter as Everything Else

Throughout Magicâs history, there have been a variety of anthropomorphic races introduced into the game. These creatures fit into two very different categories:

As an example of the first group, we can look at the leonin from Theros:

Our friend Brimaz here is a humanoid cat commonly referred to as a leonin. However, if you look at his type line, Brimaz has the type Cat, and when Brimaz summons more leonin to fight beside him, those creatures are also Cats. If we were to look at all of the different anthropomorphic races in Magic, the majority have type lines matching their animal halves, placing them into this category.

Looking at the races of Magicâs past, one could make the argument that apart from Minotaurs, this convention is the norm for Wizards and that using the animal half as a creature type was just something that they have been doing since Alphaâthat is, until you get to these guys:

The Viashino fly in the face of this assumption by not being creature type Lizard. This anthropomorphic race has a type name all its own, signifying it as a unique race in the Magic Multiverse. What is it that made the Viashino different? On Blogatog, Mark Rosewaterâs Tumblr where he posts his daily Tales from the Pit series and occasionally answers community questions, one community member attempted to get to the bottom of this mystery. In June of 2014, the following question was answered:

Kalatash asks an interesting question. Should the Viashino be âfixedâ by having their Oracle types updated to be Lizards? Markâs opinion that there is too much history to undo the Viashino type is a valid concern, but what I found more interesting was that he went so far as to say that if R&D would be able to go back in time, the Viashino would most likely be Lizards instead, which helped to give us some insight into what R&Dâs current opinion was on the subject.

A Special, Beautiful, and Unique Snowflake

Flash forward three months to Khans of Tarkir preview season. The khans were slowly being revealed to the public for the first time, until we were finally introduced to the leader of the Sultai clan:

The Naga of Tarkir seem to say the exact opposite about R&Dâs opinion on the naming convention for anthropomorphic creature types, and they are a member of the second category of these races in Magic: anthropomorphic races that are given their own unique types. So what is it that prompted the switch? Why did R&D decide the Naga deserved a special treatment with a creature type to call their own? For insight into this question, we can turn to another R&D blog, this one owned by senior Creative Team member Doug Beyer. The following question was answered on his Tumblr A Voice for Vorthos: 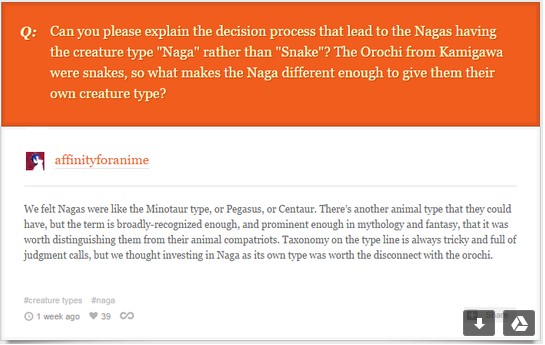 According to Doug, the reasoning behind this decision lies in the fact that Naga are broadly recognized and prominent in mythology and fantasy. He cites three other creature types as examples of this philosophy in the Minotaur, the Pegasus, and the Centaur.

If we were to follow the naming convention of most of Magicâs other anthropomorphic races, the Minotaur could have the type line Cow Berserker, the Pegasus could be a Horse, and the Centaur could be a Horse Warrior. However, as Doug states in his response, the fact that these three races are so well known in fantasy literature means it is okay to use their established names as their own unique creature types; thus, the Minotaur, Pegasus, and Centaur types were born.

So it would seem that with Dougâs response, we have our answer. When an anthropomorphic race is created, it should be given a type that matches the animal it represents unless the creatureâs type is a well-known fantasy creature. In that special case, a new type should be established for that creature. For Khans of Tarkir, it was decided that there would be a race of snake people resembling Naga. Rather than give them the creature type Snake, the new race was called Naga in order to pay tribute to the fact that their race is a well-known and previously-established fantasy creature.

Is This Line of Thinking Correct?

But why stop here? One thing I have come to respect about Wizards R&D is that they are always open to reevaluating their previous decisions in order to learn from past mistakes and continuously improve Magic as a whole.

Doug makes an excellent point that for something as well-known as a Minotaur, giving it the creature type Cow Warrior instead of Minotaur Warrior would be doing it a disservice. However, I would argue that the Naga is not as well-known as the Minotaur as a fantasy race and that there are definitely players who had no idea what a Naga was before Khans of Tarkir. These players will gradually come to recognize humanoids with snake bottom halves as Naga as they become more and more exposed to the cards containing these snake humanoids. This brings me to my argument:

I believe that with enough exposure, any race given its own proper name can become a recognized staple of any IP. The trick is ensuring that the race is given an adequate name when it is first introduced. The Viashino are an excellent example of this theory, as that is a race that was virtually unknown until Magic.

Cat humanoids have been a part of Magic since Legends, but the first time they were introduced to us as leonin was in Mirrodin. The difference between the leonin and the Viashino lies in the fact that the leonin were given the type Cat instead of âLeonin.â

The leonin of Mirrodin were most likely given the creature type Cat instead of âLeoninâ so that players who had copies of the previously-printed cat humanoid cards could add them to a tribal deck.

However, since their printing in Mirrodin, we have encountered the leonin as a race on two additional planes: Alara and Theros. On Theros, the cat humanoids are again referred to as leonin, and on Alara, while they go by the name Nacatl, we know that Ajani is from Alara and that he is a leonin.

This leads us to believe that the leonin are a tribe R&D would like to continue using as a staple race in the Multiverse. If back in Mirrodin the leonin were introduced to us with the type line of âLeoninâ instead of Cat, it would have been jarring at first (conflicting with the original Cat Warrior cards), but as we were more and more exposed to the race, it would have become a mainstay of the game, creating another staple like the Viashino that was unique to Magicâs IP. If R&D had decided to create the type âLeoninâ back in Mirrodin, they could have easily changed the Oracle types of the small number of current humanoid Cat creatures to âLeonin.â Making that change now would be impossible.

This same treatment could have been used for most of Magicâs other anthropomorphic races (such as the loxodon, rhox, and ainok), creating a vast well of unique races part of the Magic IP.

In short, making a tribal deck of Viashino can contain only Viashino, and that makes sense from both a gameplay and a Vorthos perspective. A âLeoninâ tribal deck, while still possible, is really just a Cat tribal deck in which card selection is limited to cat-humanoid cards only. So I agree with Dougâs assessment that, going forward, all anthropomorphic races should be given type lines that match their animal qualities unless they are well-enough-known fantasy staples that they can be given unique types (Naga, Minotaur, etc.). However, if I were able to go back in time, I would not change the Viashino to Lizard, as Mark suggested, and I would instead ensure that each newly-created anthropomorphic race was given a unique type that could be used across multiple planes in order to establish that race as a part of the growing IP.

Last week, many of you expressed the desire to design cards for the plane we worked so hard to create together as a community. I have some great news! Each week over at Goblin Artisans, Jay Treat runs a âWeekend Design Challenge,â where he has the community submit and critique designs based on a set of predetermined parameters. After talking with Jay, he has agreed to feature a challenge this week in which heâll ask for submissions based on Somnia. So please head over to the blog this Friday, and look for Jayâs posted challenge if you would be interested in designing cards for our world. Also follow me on Twitter @AntMTG, and I will be sure to send out an update as soon as the challenge goes live. I look forward to seeing what everyone creates.