Comedy in flavor text is a heated topic. There are many who believe that flavor text is the best opportunity for Wizards to inject a little bit of fun and playfulness into an otherwise serious game, but for every player calling out for more humor in his or her Magic, there is another demanding the goofy quotes and snarky one-liners be stricken from the face of the cards forever. Magicâs head designer Mark Rosewater is notorious for being a proponent for all things silly being included in the game he works so hard on. Having both written and been in charge of the team writing flavor text for multiple sets, Mark has had ample opportunity to inject his brand of comedic writing into Magic. In a 2002 article entitled "The Write Stuff," Mark recounted his personal top ten, listing his favorite pieces of flavor he had written over the years.

My question is: Does comedy really belong in Magic at all?

Many will argue that Magic just would not be Magic without a little bit of goofiness now and again. That comedy in flavor is something that has been a part of the game for as long as they have been playing the game. And you know what? They would be right. Comedy in flavor has been in the game since Alpha, and not just on some one-of throw away card. No, Alpha had over ten different cards that carried a lighthearted or downright goofy tone, including a card that would forever set the precedent for how players would view their Goblins.

But the fact that something has been a part of the game since Alpha does not mean it should not be removed from the game. Banding was in Alpha, and I think the majority of us could agree that the game is better off now that this particular mechanic is no longer supported.

In order to determine whether comedic flavor is causing more harm than good, we need to look at the pros and cons that humor brings to Magic.

Mike Linnemann and I discussed this briefly on our #Vorthos episode of the Snack Time podcast, but the idea is that if you have an otherwise serious card, having a piece of goofy flavor can disrupt the entire feel of a card. Imagine you are opening a booster pack, slowly sliding each card in the pack down to reveal the next card in the pack name first. You slowly move your last common, unveiling an uncommon green card: 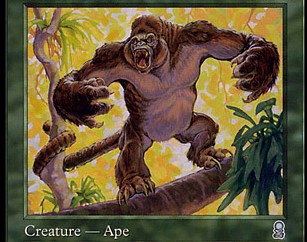 Itâs some sort of half-tiger ape creature with a tiger tail and clawsâneat! You are excited now, and you continue revealing the card:

This card is dumb.

Obviously, this setup is a little exaggerated, but I challenge you to look at that amazing art by Heather and try to not picture a big banana in there. This is one of the inherent dangers of comedy in flavor. One single goofy line can completely disrupt the overall feel of an otherwise serious card. Writing flavor text is an important job because it is a way for writers to link the mechanical and artistic pieces of the card into one coherent wholeâor is an opportunity for them to expand on the overall lore of the plane we are visiting. When comedic flavor text is used in this fashion, it sticks out like a sore thumb and can sometimes do the reverse by actually taking away from the game. Our poor Gorilla Titan will never be remembered for its ability to close out games as a rough and tough monster, and it will instead be known for its monstrous appetite (and also for its ability to talk apparently).

Con: Comedic Flavor Is Silly and Makes Magic Feel like a Kidâs Game

Magic players have all dealt with other people who see the game we love and just don't âget it.â Some of us have even had the misfortune of dealing with certain individuals who feel the need to comment on how they think Magic is a âkidsâ gameâ and that we must be immature for playing something so childish. We pull out our Krakens and Dragons and Demons and begin to argue that the reverse is actually true, that unlike PokÃ©mon or Yu-Gi-Oh!, Magic deals with adult themes and has complex art and flavor. It is at that crucial moment when we are paging through our binders, pointing out all our seriously scary cards, that our no-good bully fails to see all the cool art by rk post, Steve Belledin, and Chippy, only to pull out this guy instead: 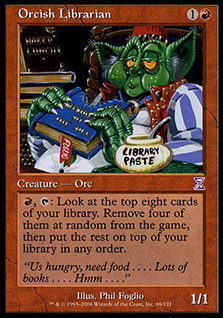 âUs hungry, need food? Ha! You are such a dork.â The bully walks away laughing as you curse your misfortune, accidentally opening up to your Phil Foglio memorial binder page. The last thing Magic players need is more fuel for the fires of people who would be quick to judge our passions. A lot of players take pride in the fact that their hobby is actually rooted in complex and somewhat adult themes, summoning demons and slaying monsters with complex arcane rituals instead of summoning fluffy animals from little round balls. When flavor with a comedic tone is introduced into the game, that serious tone is lost, allowing outsiders to view Magic as no less childish than other games.

Pro: It Provides Comic Relief Reminding Us Magic Should Be Fun

Magic is a serious game, and we all take it very seriously, but it is nice to take a break from all that seriousness every once in a while. As Wizards works harder and harder with each setâs release to further Magicâs growing narrative, the available space for comedy in flavor shrinks smaller and smaller. Innistrad was a setting where fear and terror was on everyoneâs mind. In a world carrying such a dark tone, poorly written comedic flavor would have stood out as badly as it would in any horror movie. Luckily for us, the writers involved with Innistrad block knocked it out of the park when they introduced us to Gisa the Mad and her brother Geralf. The sibling rivalry showcased between the twins reminded us that you can always have fun, even if you live on a plane as dark as Innistrad. On Theros, we experienced the epic scale of Greek-inspired myth. Sedge Scorpion reminded us that no matter how heroic our warriors became, they were still human, and the Scorpion did so in a way that made us smile. Tarkir is a plane of ruthless warlords, among which is the Mardu khan Zurgo Helmsmasher. I tend to focus on flavor text, but the name of a card can have just as much comedic flavor. Ankle Shanker does a wonderful job of making us laugh and wince at the same time, as we envision the little goblin driving his dagger into unsuspecting ankles. The fact that the following scene could have easily occurred on this otherwise serious plane warms my heart:

Zurgo: You there! How did you defeat your first enemy?

Human Mardu Warrior: I pummeled his head with my warhammer.

Zurgo: You shall be known as Skullcracker! And you, goblin, how did you kill your first?

Zurgo: All, meet Ankle Shanker! Warrior of the Mardu Horde.

My point is that when used correctly, comedic flavor can help relieve some of the pressure in an otherwise serious set. It reminds us that Magic is a game, and it is supposed to be fun.

Pro: Comedic Flavor Is Silly and Makes Magic Feel like a Kidsâ Game

I know what you are thinking. âBut Ant, you just said that making Magic feel like a kidsâ game was a con.â The thing is, while to the wrong person, the goofiness in Magic can be viewed as a negative, to the people actually playing the game, it can actually be seen as a positive. If someone were to ask you, âWhy do you play Magic?â what would your answer be? For many of us who have been playing this game since we were kids (and for me in particular), the answer to that question is that Magic is filled with childhood nostalgia. When I play Magic, the cards may be different, and the plane may be different, but the actual mechanics are the same. That feeling of playing a great game of Magic is identical to the feeling I felt when I was twelve. Comedy in Magic helps to create similar nostalgic feelings. Laughing at something silly like Sedge Scorpionâs flavor text or the art of Goblin Diplomat reminds us that we don't have to be serious adults all the time. Sometimes, itâs okay to be goofy. Sometimes, it can be fun to act like a kid again, and that is okay. 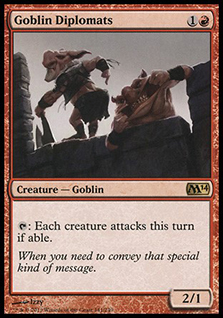 Whatâs My Opinion in All This?

Comedy is an important piece of Magic that has been there from the beginning, and while it may be used inappropriately at times, I believe that the benefits comedic flavor provides greatly outweigh any cons that come with it. What is important is to understand the appropriate times and ways comedic flavor can and should be used in each new setting. Matching the tone of a setâor simply of the card itselfâis vital. Cards like Gorilla Titan and the Ice Age version of Lure are out of place and can even take away from the sets that they are in. Cards like Hot Soup and Acorn Catapult are the ones that make those âbadâ comedic cards worth it.

A Magic world without comedic flavor is a dark one indeed, and itâs not one I would like to experience any time soon.