Welcome back, Internet! Today, weâre back to reviewing mobile applications. Specifically, Iâll be covering deck-building apps and mobile card databases for the iPhone.

Note: I mentioned last week that I had downloaded some apps that had yet to update their databases with the cards from New Phyrexia, and those apps still werenât updated by time I sat down to write my article this week.

Abandonware, or software that is no longer supported or updated, is an unfortunate fact of the App Store. Iâm not sure how long it takes Apple to cull abandonware from their servers, but Iâve seen some MtG programs on iTunes that are at least two years old. Be sure to check the date that an app was last updated in iTunes before downloading it. This information, as well as the appâs category, current version, size, language, and publisher, can be found on the left-hand side of the iTunes window. If the last update a card database received was before the newest set came out, you can be pretty sure the app information is outdated. Some apps update their card lists remotely, so this isnât always true, but itâs accurate enough that I use it to judge apps Iâm uncertain about. Frequent updates from a publisher are not only a sign that the developer cares about their product, but that you can trust that any bugs will be fixed in a reasonable amount of time.

In any event, letâs get on to the apps. And donât worry, Google fans, Iâll be reviewing Android programs next week. 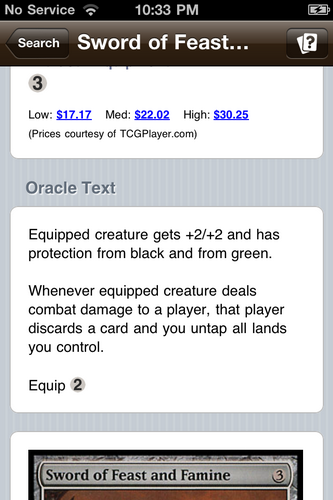 Orcish Librarian is a very solid piece of software. The app is a card database that allows you to quickly search up any card in MtG by name, and then view an image of the card, its oracle text, and current prices based on TCGPlayer. If thatâs what youâre looking for from an app, I definitely recommend this one. While there is no settings page or advanced search, the software is very quick to load search results and card information. Iâm really impressed with the work that the developers put in here. All too often, a developer will try to pack a piece of software with as many features as possible, thinking that more features automatically means a better app. Usually, it just means that not enough time was spent on each individual feature, and you end up with a bunch of half-finished ideas, instead of one well-polished feature. Orcish Librarian is definitely well-polished and worth the download. 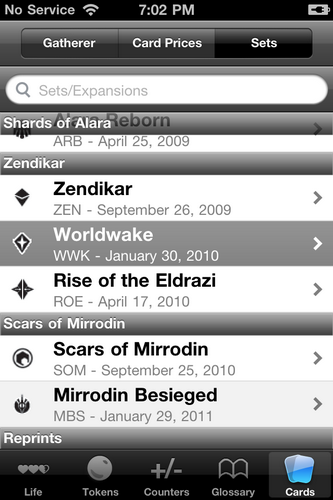 After a reader recommended Gathering Utilities in the comments of my first article, I decided to download this app and give it a shot. I canât believe I actually paid money for this thing. The card database isnât even stored locally. In fact, itâs not a card database at all. When you search for a card, the app just closes and drops you into Mobile Safari, sending you to WotCâs Gatherer search page, even if you arenât connected to the Internet. This is very sloppy programming on the part of the developer. They could have popped up a Web view within the application that would allow them to display the Gatherer search results without booting you out of the application. Also, they should check for Internet connectivity before just closing their app and opening Safari, hoping that a page will actually load.

Utilities has other features, but they are as unpolished as the card database. There is only support for up to four players, and only life totals can be kept on the main screen. You have to go to a completely different tab if you want to track Commander or poison damage, which is annoying in the middle of a match.

One final complaint about this app: It will only run on 4.3.1 devices. That means all Verizon users are out of luck, as well as AT&T 3G users. Thereâs nothing to stop these users from buying it, so beware. The developers should have built using the 4.2 SDK and avoided this situation altogether. This app should avoided at all costs. 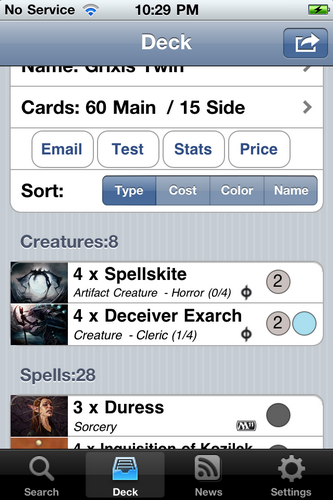 This is the program I recommend for anyone willing to spend $4 on an MtG application. Iâm one of those people who will generally take the free alternative over the paid app any day, but Iâm actually happy to have spent the money on this one. It has a ton of very cool features, runs smoothly, and even has RSS feeds for several top MtG sites. GatheringMagic is not one of these RSS feeds, so letâs hope the developers read this article and update it soon.

Obviously, weâre more interested in the deck-building and card-database portion of the software, and Decked Builder does not disappoint. You can save multiple decks to your device and e-mail them in the MTGO format to any PC. After building your deck, you can draw a sample hand, see how many cards of each color or converted mana cost you have, or even price out the entire deck based on TCGPlayer pricing.

The card-search feature is just as slick as the deck-builder. You can filter your search results by set, color, type, rarity, or mana cost. Results appear quickly and include updated low, mid, and high prices. Prices and images are only available while you have an Internet connection, but Oracle text and deck-building features are still available offline.

The settings page is feature-rich, and has one of the coolest options Iâve seen in any MtG program. Thereâs a program called Dropbox that allows you to synchronize local folders across multiple computers. Decked Builder includes a setting to link up with your Dropbox account and then save and load deck lists from your shared folders. The files are saved in the MTGO format, so you can brainstorm a deck while youâre out and then test it when you get home. Iâve used Dropbox for collaboration on different software and audio projects that I work on, and I was really happy to see this feature included.

The lite version of this software only contains Zendikar block, and is more of a demo than a functional app. Check it out, and see if you like it. 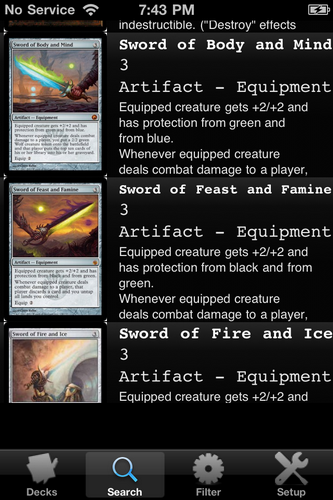 This app is very similar to Decked Builder, including its price. If Decked Builder werenât such a kick-ass app, Iâd recommend this deck-builder instead. Most of the features are the same, minus the Dropbox support. This app does have better graphs and charts, but the interface for deck-building is far less fluid and only includes options to e-mail your deck to yourself.

Another bonus for this app is the fact that new sets are updated remotely. This means you donât have to wait for an update for the app to pass through Appleâs archaic approval process and can use new cards the moment that a godbook is leakedâI mean, the moment that a set is released. 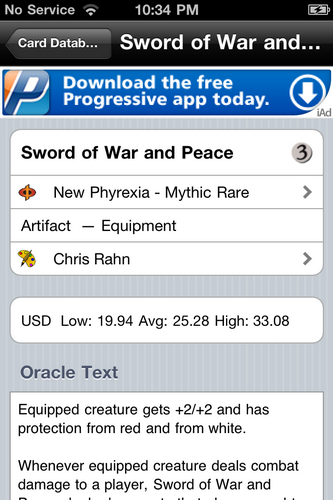 This is the only free deck-builder Iâm reviewing today, and itâs really the only free one worth the download. Itâs another one of those apps that has a few features built in, including a life counter, but it could use a lot more polish. There are no options to export the deck or draw a sample hand, but it will give you an estimated price for the deck. The life counter is actually pretty decent, and can support up to ten players with poison counters. Again, nothing fancy, but if youâre in the market for something that costs nothing, this is the program you should be looking at.

There you have it: the best and worst of deck-builders and card databases for the iOS platform. Be sure to have one handy when youâre brainstorming a deck or need to check prices during a trade. Next week, Iâll be going over similar apps for the Android. Have something youâd like me to review? E-mail me at spork at thehappywalrus dot com or hit me up on Twitter @The_Spork!