âHow do you boys like Vegas? Having some fun?â

The cabbie had driven in silence for about ten minutes, but he seemed to perk up as we approached our hotel. He glanced up in the mirror and grinned broadly as though he had just made a joke.

Through drooping eyes and a bit of a mental fog, we barely registered what he had asked. Only the word âfunâ seemed to hang in the air, punctuated by his expectant inflection.

âNot yet. We worked all day. Working tomorrow, too.â

Working all day was a bit of a misnomer. True, Nate Price and I had been covering Day 1 of Grand Prix Las Vegas, but it hardly feels like work when youâre hanging out with friends and talking about Magic all day. It only really starts to feel like work when the hall empties and youâre still hacking away at your keyboard and you realize you havenât left the building in fifteen hours.

âBut youâre going to get out and see the sites, right? Party a bit?â

I glanced at Nate. He looked back at me and shrugged.

Iâve been doing text coverage for Wizards of the Coast for a few years now and been doing it regularly for the last two. Iâve covered tournaments from Japan to Brazil to Philadelphia. Iâve been stranded during Grand Prix Hurricane (Philadelphia) and was witness to the first ever Players Championship. Iâve had beers with Pro Tour Champions and gamed for meals with, well, other Pro Tour Champions.

And last weekend, I covered the largest trading card tournament ever held.

Grand Prix Las Vegas was, in some ways, exactly like every other Grand Prix. We called feature matches, wrote some analyses, interviewed pros, and tracked down stories. We wrote articles, and when we finished one, we started working on the next. It was more or less business as usual.

But in many ways, some of which you can read about on the official coverage page, Grand Prix Las Vegas was like no tournament Iâve ever been to before.

Obviously, the size was the big story. Iâm used to large Grands Prix, having covered several two-thousand-plus-person tournaments. The throbbing masses that make up those spectacles and the organization necessary to keep things running smoothly have always been something to behold.

Vegas, however, was something else.

It was, easily, the biggest space Iâve been in for a Magic tournament, and it was full constantly. There were lines stretching out of the several bathrooms and from the one spot to get food even in the middle of the early rounds. The tournament was so big they split it into four separate tournaments, and each of those tournaments was nearly the size of Grand Prix Houston held the following week.

Each smaller tournament had its own head judge, its own staff, its own pairings sheet, and its own color-coded section of the hall. And when the first day was over, the Drafts for Day 2 still took up nearly half the hall.

The size and scope of the tournament was, quite simply, beyond anything I had seen before. The fact that it went smoothly was an incredible testament to the staff. I still donât know how they did it. And I was there.

Itâs nearly midnight when a lone security guard approaches us. Nateâs hunched over his laptop, finishing up the last piece before we can head out. Iâm packing up.

âWhat are you doing here?â

His tone is almost accusatory, as if weâre squatting or defacing property instead of coming off a fifteen-hour work day.

âWeâre finishing up. We were working coverage all day. Weâre almost done.â

âWell, be done in fifteen minutes. You need to leave.â

Eventually, a taxi shows up, but just one. Nate and I hop in. We feel a little bad about not going the same direction as the two players, but our fatigue wins out. We have the taxi driver call for another cab, but we have no idea how long it will take to get there. We drive off anyway.

Most Magic players donât understand how coverage works, leading to a lot of misconceptions. They wonder why something isnât updated yet or why we havenât yet showcased their favorite players. This isnât the article where I clear up those misconceptionsâmaybe another day.

But what I will do is take you through my days in Vegas.

Nate and I showed up around 8:30 A.M. on Day 1. The hall doesnât even open till 9:00 A.M., but we wanted to make sure the logistics were set upâInternet connection, secure place to keep our equipment, tables to write on.

Vegas added even more challenges to that. We had to make sure we knew how the split would work, if the tournaments would stay synchronized, and how would we select feature matches for four tournaments.

Once set up, we do all of the prewriting. Itâs rare to write anything before a Grand Prix, but in this case, I had written a format primer on the plane to Las Vegas. I wrote the intro blurb while Nate started tracking down more stories on Twitter and throughout the hall. This time, we were fortunate enough to have the Pro Tour photographer Craig Gibson on hand. Wizards wanted to beef up coverage a bit for this tournament, and Craig was their gift to us. Normally, we take our own photographs.

Once the tournament started, things move fast. We talk to players, take notes, write stories, and then do it all again. We selected feature matches by rotating through the four different concurrent tournament pods, looking for names or records or decks we thought people might want to see.

I interviewed a few groups that had traveled together to Las Vegas. I had sent the call out on Twitter and interviewed people from all three groups between rounds. Craig took pictures of each group, and together, I think we put together a pretty fun story. I thought it was probably the best piece I wrote all weekend.

We grab convention-center food for lunch and send someone out for Thai food for dinner. My sweet and sour chicken was okay, but I mostly just wanted the rice for fuel anyway. The Mountain Dew was my only source of caffeine. Everyone works through meals.

I wrote eight articles on the first day, something like nine on day two, not counting things such as opening blurbs. Even as a reporter for a newspaper, I never wrote at that pace. Even a busy day meant three articles there.

When the last round finished, Nate and I wrote up the last few outstanding items we had and cabbed it back to the hotel. A strange mixture of tired and wired, the question was always the sameâ.â.â.â

Rashad was asking. So was Marshall. We always drafted, always played some kind of Magic. Thatâs what coverage guys do after jealously watching thousands of players do just that during a Grand Prix. Not playing is the hardest thing about doing coverage.

I was torn. On one hand, Modern Masters was, by far, my favorite set to draft in a very long time. I wasnât alone in that sentiment. Nate and I still had work to do, but the video team went back to the hotel, assuring us theyâd save us a spot.

Nate was pretty awake now, and though he gave me the option, he clearly wanted to head to the Strip. Ever the social one, he had already talked to several people about meeting up at the Bellagio.

âI donât know. Iâm in Vegas, so I want to Vegas. But Iâm also really tired. And I want to draft.â

I was really tired. I wasnât sure I had the energy to Vegas. But the cabbieâs question from the previous night hung in the air.

Nearly thirty hours of working, little sleep, and a 7:00 A.M. flight? Of course weâre going to the Bellagio.

Nate and I quickly change clothes and grab a taxi. Itâs after midnight, so the air is tolerable. In most places, even back home in Austin, it might be cool. In the desert, itâs merely less stifling than before.

The energy of the casino quickly wakes us up. Weâre there to play blackjack and meet up with Ben Swartz and AJ Sacher. Scorekeeper extraordinaire Nick Fang is meeting up with us, too. He happens to be a pretty crack blackjack player.

We spot Ben and AJ and a group of Magic players, but they donât see us, so we sit at the table directly across the pit facing them and start playing, wondering how long it will take until he sees us.

We try to explain to the dealer why weâre in town, but the dealer doesnât know Magic, so it doesnât make much sense. I have this conversation at least once a week, so Iâm familiar with the rhythms and the furrowed brow I usually receive in response. We move on as the dealer hits another blackjack. One of the women constantly taking our chips raises an eyebrow every time we make a dubious play. As mentally exhausted as we are, she raises her eyebrows often.

Itâs after 2:00 A.M. now, and Ben and AJ and Nick have joined our table. Most of us are losing. Iâm losing a lot. Iâm down to my last $15. I win that handâand then the next. With equal mixtures of adrenaline, exhaustion, and alcohol, I devise The System. It involves betting more after I lose and less after I win. I think itâs brilliant.

Itâs 4:00 A.M., and The System never fails. I leave the table up more than $200. Nick is also up, but everyone else lost. Ben has long since gone to the airport. We find some food and make our way back to the hotel. Not everyone survived. 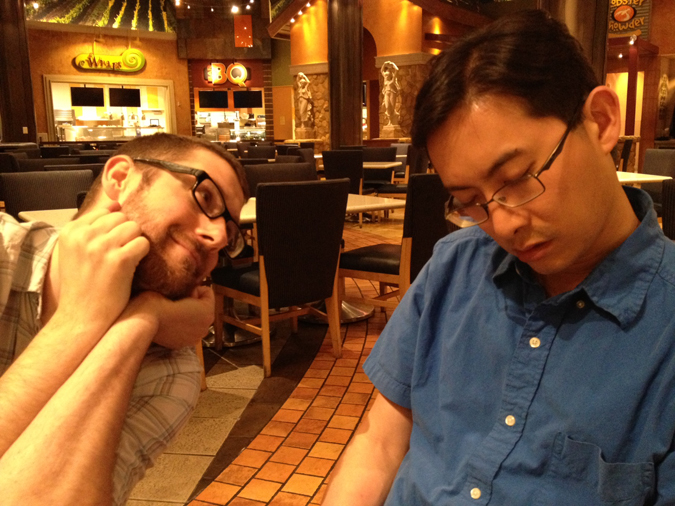 Weâre exhausted. All we want to do is sleep. Nick actually does sleep (thatâs him in the picture above), in the casino, the hotel lobby, and the taxi. I drift off in the taxi, too.

We part ways at the airport check-in counters. We say our brief goodbyes, but know weâll see each other soon. Thereâs always a next event.

Iâm spent. Every part of my body hurts. I can barely keep my eyes open. I roam the airport like a zombie until my flight boards. Until I can finally close my eyes, Iâm pretty much miserable.

And I canât wait to do it again.