This is the story of Stoneforge Mystic.

No, thatâs not my preview card. That would be quite the kick in the nuts if Wizards printed a card that was banned in Modern in a set called Modern Mastersâkind of like if they printed a card in an Event Deck and then, shortly thereafter, banned it in Standard. They would never do that.

At any rate, Stoneforge Mystic is definitely not my preview card today, but its story informs the reason we need to pay attention to a certain 2/2 Knight that most certainly will be in Modern Masters: Knight of the Reliquary. 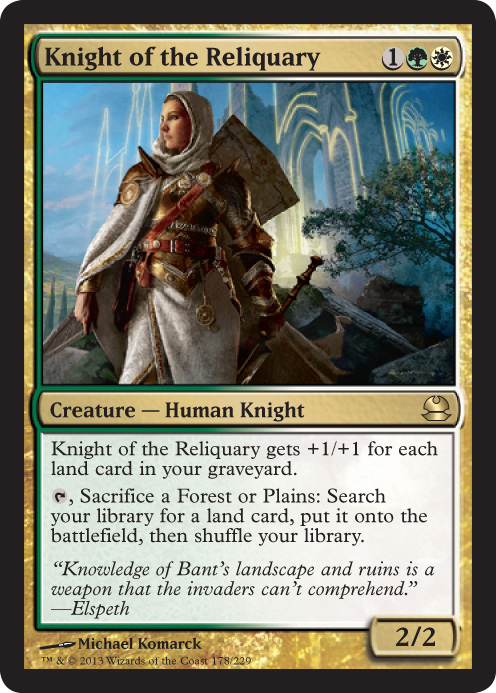 Right now, Knight of the Reliquary sees little to no play in Modern. In fact, the last time we found Brian Kiblerâs Invitational card in the decklist of a major tournament was nearly a year ago, when Junya Iyanaga piloted the following list at the Players Championship:

Since then, pickings have been slim. Literally the only recent list with Mrs. Reliquary (or Mr. ReliquaryâIâm sure the Knights of the Reliquary are equal-opportunity employers) that I could find was from a Magic Online player by the name of Matts5600, who went 3â1 with this list:

Deathrite Shamanâs ubiquity in Modern means Knight of the Reliquary is almost always a 2/2 or 3/3 at best. Its value as a beater has been diminished to the point that, currently, thereâs no reason to play it over other more reliable options.

So, what does this have to do with Stoneforge Mystic, the boogeyman of Standard that terrorized players for several months alongside Jace, the Mind Sculptor?

It has to do with this:

This is actually a later list than I would have liked, but it illustrates exactly the point I wanted to make. In the first days of Stoneforge Mystic, its job was to search up, among other things, Adventuring Gear.

The use of Stoneforge Mystic to find Adventuring Gear predates any of the fancy Swords players started searching up since both Mystic and Gear were in Zendikar block. Players played this combination in the fetch-land-heavy Boros decks that tried to abuse both Steppe Lynx and Plated Geopede alongside a fetch-land-heavy mana base.

In other words, Stoneforge Mysticâs original use was to be a beater.

It didnât really become a format-defining, Legacy-warping, Modern-ban-worthy menace until Scars of Mirrodin block came around and brought with it Sword of Feast and Famine and Batterskull (and, to a lesser extent, the other Swords). The Equipment-matters card became better when better Equipment was printed.

We saw another example of this around the exact same time with the Zvi Mowshowitz inspired/designed Mythic deck. At first, the deck used Rafiq of the Many and Finest Hour to deal copious amounts of damage, but it was a completely different and initially overlooked exalted creature that came to redefine the deck: Sovereigns of Lost Alara.

Sovereigns didnât become the standard, however, until they printed Eldrazi Conscription, the biggest, baddest, most Eldrazi-ish Aura ever printed. Suddenly, Sovereigns of Lost Alara had something worth searching for.

And again and again and again, we see this same pattern: Wizards prints the newest top end of all awesomeness in a categoryâyour Emrakul, the Aeons Torn, your Batterskull, your Eldrazi Conscription, your Iona, Shield of Emeria, your Darksteel Colossusâand it immediately raises the value of other cards that can tutor for or cheaply put into play that category of card.

Now take a look back at Iyanagaâs deck list and check out his sideboard. Arena is a pretty random singleton to have in his deck, but itâs there with a purpose. Knight of the Reliquary can easily tutor it up, and because both Knight and Tarmogoyf are often the biggest things on the table, Arena turns into uncounterable removal. He also had Stirring Wildwood and Moorland Haunt in the main deck.

Mats5600 does much of the same in the main deck, with access to Treetop Village, Gavony Township, and Kessig Wolf Run. Knight lets him tutor up whichever is most appropriate for the situation.

For most of Knight of the Reliquaryâs non-Legacy history, its primary use has been as a giant, fetch-land-fueled monster, often growing to 8/8 or larger with just an activation or two. But now and then, you see a use similar to what Iyanaga did with Arena, where a sweet, singleton land is plucked out of your deck with a purpose.

So, like Stoneforge Mystic before it, Knight of the Reliquary has virtually unlimited potential, bound only by the lands Wizards of the Coast is willing to print. It may not see much play today, but it really only takes one special land to put Knight of the Reliquary on Modern steroids and catapult it back into the spotlight. It doesnât even need to be big in that scenarioâ.â.â.âit just needs to be a tutoring machine.

But thereâs more good news for the Selesnyan-flavored tutor engine. The recent changes to the legend rule may be more of a boon than anything else we could do to help out Knight of the Reliquary short of banning Deathrite Shaman.

From Sam Stoddardâs article on the recent rule changes:

This change will also let us create legendary lands again, a process that (outside of Eye of Ugin) hasn't really been seen since the Kamigawa block, and for good reason. Most players found their game play under the old legend rule to be not particularly fun. Between both getting your land destroyed in a fashion you can't respond to by an opponent and having a dead card in your hand if you happened to draw two copies, they were a bad sell. While I don't anticipate we will do them very often, it is another tool we have for balancing powerful lands going forward.

In other words, the new legend rule frees them up to make new legendary lands that are more powerful. Now, granted, itâs unlikely Wizards would ever print a land that can decimate an entire board, poison someone out in one hit, or shut off all of a playerâs options for playing spells, but what if they printed something like this?

When Shock Top enters the battlefield, it deals 2 damage to target creature.

to your mana pool. Shock Top deals 1 damage to you.

And if Deathrite Shaman is ever banned, a proposition that isnât totally out of line at some point in the future, donât be surprised if Knight of the Reliquary rises back up simply based on the fact that itâs awesome.

The bottom line is that Knight of the Reliquaryâs power can rise and fall on the quality of lands available in Modern, and itâs not difficult to foresee a future in which some land or several lands elevate Knight to a format defining powerhouse.

Things I Think Iâm Thinking about in Modern