By now, Modern aficionados are off brewing a million different variations of Faeries and Zoo in light of the recent banning and unbannings. And by brewing, I mean asking Paulo Vitor Damo da Rosa for decklists on Facebook. 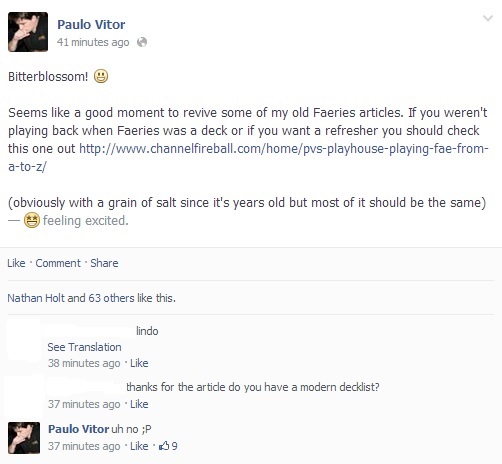 But those of us who are inclined to hate the Fae (and, to a lesser extent, Wild Nacatl, who really never deserved a ban in the first place), weâre actually much more interested in beating them. Faeries wonât be nearly the monster it once was in Standard, but itâs certainly a player to be taken into account in our format calculations.

As an exercise (and because I love the deck), Iâm going to take you through my thought process in working through these bannings while still staying true to Cruel Control, a deck I ultimately believe will be a strong player in Modern in the right shell.

For reference, hereâs where Iâm at with the list.

Iâve made a few changes since my last article, and theyâve all been for the better. Serum Visions is gone, replaced by another discard spell and two Remands. The improvement in that small shift cannot be understated, and where I thought the deck was a genuinely good deck, though a bit behind, before, I now think it might legitimately be the best control deck in the format, no hyperbole.

Pre-ban-list, this would have been my list, hands down, and I would have been happy to play against any non-Tron matchup. Even there, Iâm fine playing post-board, though far from excited about it. Before the bans took effect, I would have actually been ninety-nine-percent sure this was the right way to build this deck, no reservations.

Now? Well, now things are different. Cruel Control was built to attack certain decks in certain ways, and at no point did it take into consideration something like Bitterblossom or a full-on Domain Zooâstyle deck.

Whatâs more, those two types of decks pull you in vastly different directions. Electrolyze is pretty much the best card ever against Faeries, but it looks downright dismal if weâre facing a menagerie of 3-toughness creatures.

But we donât just throw our hands up in the air and declare Cruel Control dead because the old Cruel Ultimatum decks had a difficult time beating the old Faeries decks. We donât just reach for Volcanic Fallouts and hope thatâs enough.

Step one is to figure out what, if any, effect the ban list changes will have on the format.

This Really Puts a Crimp in My Shamans Deck

Letâs first address the banning that seems like the biggest possible change.

However, the one point Deathrite had in its favor in that matchup was its ability to churn out a turn-two Liliana of the Veil without being a dead card later. Yes, I suppose itâs possible that Birds of Paradise or some such will step in for Deathrite to help some enterprising spell slingers cast a turn-two Planeswalker that doesnât suck (Iâm looking at you, Tibalt), but itâs far less likely.

So, if we assume for a moment that people wonât just slot Birds of Paradise in for Deathrite and go on their merry Jund ways, that changes one of the fundamental assumptions about how we build Cruel Control: that we need to value killing Planeswalkers highly.

Previously, Dreadbore got the nod over Terminate because one of the ways Jund has to beat Cruel Controlâwhich seems to have been a favorable matchup for the Grixis shardâwas to cast a turn-two Liliana on the play and immediately tick it up. That puts it out of Lightning Bolt range and immediately puts pressure on Grixis to manage its hand and not lose to a Liliana ultimate. I actually have yet to lose to Jund in a normal game (i.e. mulligans and screw didnât play a role) where turn two Liliana wasnât the reason.

In a normal game in which Liliana is cast on turn three or later (or turn two on the draw), Grixis was a pretty strong favorite. Given that that should, at the very least, become less likely, Terminate starts to look more reasonable considering the only other âWalker weâre really concerned with is Karn Liberated. That theyâre close to interchangeable makes me tempted to stick with Dreadbore for Karn alone, but other reasons may change that down the line.

As far as Cruel Control is concerned, the unbannings are far more impactful.

Wild Nacatl is either fantastic for Cruel Control or terrible. Iâm really not sure. The full-on Zoo decks should be, with the proper amount of care, pretty good matchups for Cruel Control. Electrolyze and Jace Beleren start to look pretty bad if itâs all Kird Apes and Loam Lions and Tarmogoyfs, but Damnation and Lightning Bolt and Cruel Ultimatum start to look pretty good. If the aggro version becomes a thing, we can just up our interest in Damnation and Anger of the Gods and be pretty happy.

On the other hand, the Counter Cat lists that the ChannelFireball team used in the first Modern Pro Tour in Philadelphia seems to be a terrible matchup for any control deck built the way Cruel is now. Nacatl into Tarmogoyf into Mana Leak seems pretty unbeatable, even if we start looking at things like Deathmark and Kraken Hatchling on Cruelâs end.

Zoo also makes Jace Beleren look worse and worse in the main deck. If we see some kind of aggressive resurgence in Modern, little Jaceâthe signature card of this build and the engine that puts it over the top in a lot of matchupsâstarts to look a lot worse. Jace, Architect of Thought, on the other hand, starts to look really, really interesting.

Some of you might see where Iâm going with this.

Bitterblossom, you might recall, makes 1/1 tokens. Jace, Architect of Thought, as you also might be aware, pretty much blanks 1/x tokens. If the Ted Mosby of Jaces also happens to be serviceable against Zoo, we might have to start thinking about which Jace weâre calling for help.

Additionally, Bitterblossom and Faeries in general is likely to cause an uptick in Abrupt Decay, a marginally-played card at the moment. If Decay is suddenly everywhere, the Architectâs 4-mana cost in the upper-right starts to look more like a feature than a bug.

But there are other directions we can go with this line of thought as well. Night of Souls' Betrayal seems like a potential player against both decks for the same reason, and Illness in the Ranks is an excellent Bitterblossom answer, should it come to that.

The point is that the tools exist. We just have to determine how much we want them.

And if youâre worried about resolving these spells against Faeries, you have to keep in mind that this isnât your fatherâs Cruel Control. We have Thoughtseize and Inquisition and Remand and Mana Leak and Lightning Bolt and Electrolyze. We have a lower curve and a broader metagame.

And we also have Bitterblossom.

One strategy that might be employable by Cruel Control is Bitterblossom. Right now, Cruel has issues with enchantments like Blood Moon. Blood Moon isnât seeing a ton of play at the moment, but if it did, Cruel would have to either counter it or force its discard. But if we play a surprise Bitterblossom on turn two against an unprepared opponent, maybe Blood Moon doesnât matter as much anymore. Or if we play it against a deck just planning to Mana Leak us out because we play a 7-mana sorcery, maybe the opponent has no way to answer it, and we steal a game we had no business winning.

Also, the addition of Bitterblossom to the Blood Moon school of things Cruel canât answer might force us to start looking at Ratchet Bomb. Ratchet Bomb also, not inconsequentially, is a decent answer to Zooâs parade of 1-drops.

And because Mistbind Clique is a thing, Terminate starts to look more attractive. That, coupled with potentially fewer turn-two Liliana of the Veils, makes me think Dreadbore might not be as necessary.

So, letâs assume, just for the sake of argument, that both Faeries and Zoo rise up and take significant places in the metagame. How might we adapt?

While Iâm slightly uncomfortable going down to two Planeswalkers, I find it hard to justify more 4-drops. Part of Jace Belerenâs attraction was his casting cost, and bumping that up by just 1 makes it far more difficult to fit in. Three was kind of a sweet spot between all of your 2-drop counters and removal and your Cryptics and Damnations, making it slot in perfectly. But weâre going to assume for the moment that itâs just not as good in new Modern and replace it accordingly.

Jace, Architect of Thought is also slightly better against Splinter Twin, so thereâs that.

We go up to two Anger of the Gods in the sideboard for Zoo (and it does much the same thing Pillar does anyway), plus a pair of Ratchet Bombs that also have utility against Bitterblossom, Blood Moon, and Delver variants. We lose a Vandalblast, but weâre already a bit heavy on artifact destruction, and Anger of the Gods is okay against Affinity anyway, as is Ratchet Bomb. In fact, itâs possible Bomb should have been in there already anyway.

I also swapped in two Terminates and kept a single Dreadbore in the main deck. That gives us more creature kill and more instant-speed kill without being completely dead to an early Karn or Liliana. The third Sowing Salt in the board is to help the Tron matchup in place of the lost Dreadbore. Weâre not usually winning Game 1 anyway.

That said, there are a ton of ways we could go here. Night of Souls' Betrayal is incidentally good against Splinter Twin as well (though you donât need a ton of help there). If we want to really hate on Bitterblossom, Illness in the Ranks could find a home. Dreadbore could move to the sideboard and we could start packing Deathmarks.

We could also go to the dark side ourselves and stick four Bitterblossom in the sideboard. Iâm not exactly sure where that plan would shine, but itâs something to consider.

The point is that Cruel Control can adapt, as can just about anything. Modern is changing (and for the better, in my opinion). The only question is, will you change with it?