Over the past several weeks, I have been giving the rundown on what you need to know when dealing in the Magic oddities market. This week is in the same vein with a slightly different spin. Since the beginning of this article and until its end, I have talked and will talk about trading. I have discussed everything from how to prepare yourself for your first trade experience all the way to the nitty gritty involved with foreign foils. Now that you have a solid idea of what youâre doing, I have a favor to ask of you all for this week and this week only: Put your paper and pencils away. Thatâs right, this week there is no studying, no numbers to pound into your head, and no trades to comb over. This is the holiday season, and I think everyone deserves a breakâeven the hardest of grinders get these few weeks off. Instead of bringing you the most up-to-date trade technology, I want to instead show you some of the things you have probably never seen before, many of which you probably didnât know even existed. This week is the holy grail of oddities, the cards that donât have a price and are just legends to many, never to actually be seen with their own eyes. Without further ado, I give you the rarest Magic cards in circulation.

This list spans a number of topics, and I want to let a lot of the pictures do the talking for me since there isnât much evaluating to do as far as prices go. I will divulge what knowledge I do have on how to price these cards, but itâs few and far between. The truth is that itâs all made-up numbers until you find someone willing to shell out the cash.

This is one most people have heard of. Whether it be the Blue Hurricane or even a basic land, these cards are worth a lot of money. A Plateau in slightly played condition was just snap-bought for $3,000 within a short amount of time after listing. Basic lands have been known to go for $200 to $300, and even as high as $400 to $500 for mint condition Islands. The easiest way to identify a Summer Magic card is to look for the date at the bottom of the card next to the illustrator.

As you can see, the date and artist print is different than the Revised white-bordered versions, and therefore is easily distinguished. This is good for collectorsâit is easy for the naked eye to determine what you are dealing withâas opposed to prints like alternate Fourth, which had only minor differences from actual Fourth. A booster pack of this, although itâs unknown how many exist, can be distinguished by a printed letter E on the front of the pack. There isnât much to be said about Summer Magic that most donât already know, so on we go, diving deeper down the rabbitâs hole.

Due to their rarity, albino cards are among the hardest types of cards to price. Although I have seen a couple personally, including a Brainstorm or four, they donât come around often, and when they do, they move quickly. There is currently a set of Brainstorms on eBay for what seems to be an extremely high price, but given the extreme rarity of these cards, who is to say how much is too much? I have seen an Oblivion Stone foil missing the red ink go for over $200, and I have heard of even the most worthless cards fetching $30 or more. This is, unfortunately, not a topic we have a lot of information about, but itâs one that I imagine will shape a market as misprints become a mainstream thing. Right now, the ceiling is only set by how deep you think someoneâs pocket book is, and given how some collectors are, you could find yourself diving into a hefty profit if you can find one of these cards cheap enough.

This is among the more unique misprints in terms of how it is produced. There are multiple ways for a card to be misprinted in terms of alignment on the printing press. The most common would be where a card has the front and back facing in opposite directions. However, these are still extremely rare and worth a pretty penny, especially in the case of playable cards, since these are one hundred percent tournament-legal. Last weekend, I saw a foil Misdirection that had this particular misprint, and although he was asking $700, I have seen similar cards go for about half that, making it slightly overpriced. The beautiful thing about this market, however, as I mentioned before, is the fact that there are no real prices for these cards; so although I feel the price is high, the next guy in line may think thatâs a steal.

The other type of flipped card is far more rare and something that can fetch insane amounts of money if you market it well. This type of card occurs when the front of a card becomes printed on the back of the stock or vice versa. I have seen numerous variations of this misprint, each as strange as the last, and each fetching astronomical amounts of money. There are also more common, but still extremely rare, scenarios in the early days of Magic when cards would be printed on the same machine as other games or stock. This is how we get cards with Wyvern backs and Charlie Brown stamps, but considering those were more widely produced, they donât fetch as much money overall.

Back before the days of Magic Player Rewards and full-art cards, we had to get our textless cards as misprints. During the early days of the foiling process, there were a few cards opened that had never been seen before. Not only are these cards foil, they happened to be missing their text except the mana symbols. So few of these have been found that it would be hard to put an accurate price on them; a complete play-set of any of these cards could fetch thousandsâif not clearing $10,000âin todayâs market. 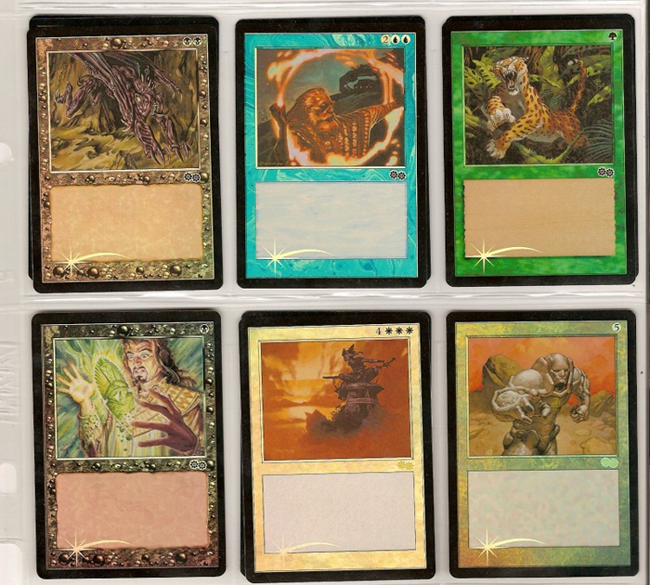 This is the Mecca of misprints; these cards are probably some of the most sought-after cards in Magic today, and they have almost literally no price tag. Some of these cards are as recent as 2007 when there was a supposed test print for Eighth Edition foils. It was later discovered that many of the cards were not only printed with different frames, but never even made it into Eighth Edition. Supposedly, only three sheets of these cards exist, making for only three copies of eachâa truly unfortunate number. In turn, that makes these some of the most highly sought-after cards in Magic, and although their existence is confirmed, I have never seen one for sale online or in person. The art comes from a multitude of sets, and the set symbol is also varied, rather than a constant Eighth Edition symbol that you would expect. As you can see, this Island has an old art and an Un- set symbol rather than anything indicating Eighth Edition. The origins and meaning of these cards is unknown, but I have heard rumors that they could have been test prints for the new card borders they previewed in Future Sight. However, we truthfully know nothing of these other than how amazing they look, so we continue to wonder whether these are a sign of things to come or a relic of the past.

The other test print story comes in the form of Urzaâs block foils. Although I already introduced you to the textless versions, there is another, equally rare, test run including a single card in each color, an artifact, a land, and a gold-bordered card. These prints were used to test different foiling processes that would then later be perfected into the old foiling process, before it saw another revamp years later. These cards are so rare that finding a price would be about as easy as finding the cards themselves. I have never seen one of these in person, and although I can guess a price, it would be just that: a guess. 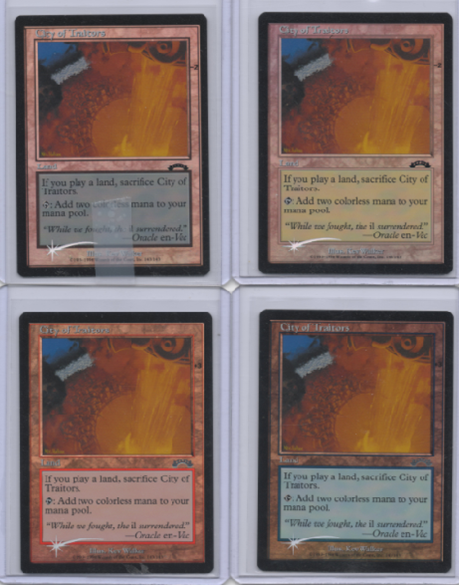 As you can see, there is a great deal of variation between these foils, making each a one-of-a-kind collectable. From what I understand, these are in the possession of almost exclusively a single person at this point, but I cannot confirm that. If someone has more information or knows something I donât, please feel free to chime in. I always love finding out more about the cards that just donât exist to the public.

Well, thatâs all I have for this week; I hope you enjoyed the week off from the usual grind. When I return in two weeks (next week will be a rerun article for the holidays), I will get back into the usual routine. What do you guys want to read about now? I have run you through what I would consider to be my strongest asset in the foreign foils market, and by now, you should have the basics of trading down. I want ideas on the higher end of trading. What little things have you always wanted to know about the trade world? I will be jumping right back into the grind when I return, and I hope to have a few reader-input questions to coverâ.â.â.âin addition to a truckload of trades.

Thanks again for reading this year; I hope you have learned a lot and can take away a solid trade basis. Next year, we start anew as the journey for Box to Extended draws to a close. I will be covering more of the trades in depth, as well as updating a list with the cards I am missing as I attempt to hunt down the last of what I need. I will be responding to questions and comments over the holidays, so please leave some feedback. Let me know what you guys think of the series so far, what I have been doing well, and what can I improve going into the new year.