We haven't looked at Modern together since Eye of Ugin was a legal card. The metagame wasn't healthy after a bout of Eldrazi poisoning, but it had a good stay in the hospital and is recuperating nicely. It's right about now it can receive visitors, so let's peek under the dressing gown of the Modern metagame. (I might have taken this image too far.)

I had a temporary job in downtown Charlotte back in 2011, and my favorite thing about the place was this sculpture by the art museum (photo credit me): 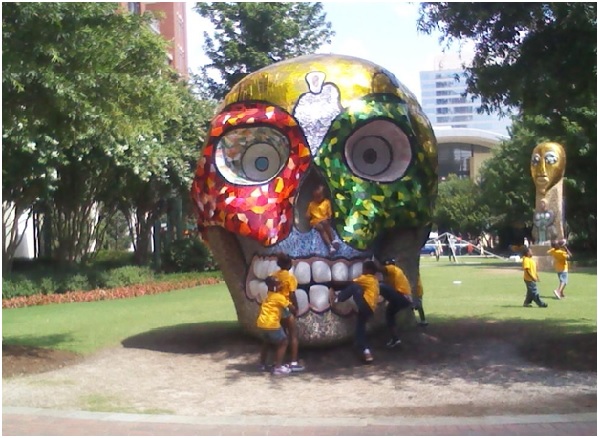 It's been my phone wallpaper ever since. And really, it can stand for a diverse metagame, as there are many colors vibrantly represented and everybody wants to climb all up in it. So what does the skeleton of the Magic Online metagame reveal? From May 2 to May 15:

Although the field can be consolidated some â Atarka's Command decks and Tron decks, for example â this feels wide open, with Abzan Company and Affinity not even making the list. A lot of the openness has to do with the Eldrazi taking up a smaller but significant part of the metagame than it did before Oath of the Gatewatch was printed; a lot of that has to do with Shadows over Innistrad's contributions, which are steadily growing.

Most of the decks at the top of the metagame have been gifted something from the last two sets. Even Infect:

For a deck based on a mechanic found in only one block to receive new cards is a big deal. This version of Infect uses two cards from Oath of the Gatewatch â Slip Through Space in the main deck and Pulse of Murasa in the sideboard. Slip Through Space allows the Infect deck to ignore the board state completely.Inkmoth Nexus flies and Blighted Agent can't be blocked; Slip Through Space allows Glistener Elf the same level of evasion and draws a card to boot. And although this won't come up much in the build I've listed, Slip Through Space being colorless means it will still resolve if an opponent tries to bounce the creature with, say, Vapor Snag and the Infect player casts Apostle's Blessing in response. Being a colorless source of unblockability is a nice feature when color-based protection is a primary form of Counterspell. Infect needs all the reliability it can get, given its plan, and Slip Through Space increases reliability in several small ways which add up.

As for Pulse of Murasa, it seems to be exactly what this deck wants against Burn, undoing a burn spell aimed at a creature and two aimed at the face. The sideboard's crowded, but if you're an Infect player fearing burn, Pulse of Murasa's a great antidote.

Naya Zoo also took an unassuming card from Oath of the Gatewatch and made it very...assuming?

There are many version of this right now â Tarmogoyf is not always included, nor is Vexing Devil â but the full creature-vomit plan which now separates Zoo more cleanly from Burn is headlined by the addition of Reckless Bushwhacker, which when Surged does the same thing as a kicked Goblin Bushwhacker while being easier on colored mana requirements. That difference in mana commitments has made all the difference, leading to a return for building around Burning-Tree Emissary. On the play, turn one Goblin Guide into turn two Burning-Tree Emissary, Burning-Tree Emissary, and Reckless Bushwhacker is thirteen damage before the opponent can play a second land. It's a deck with nut draws and sometimes hasty Tarmogoyfs - it's hard to imagine this being a bad choice for the Grand Prix.

To maximize the chances of Burning-Tree Emissary starts, many versions of the deck don't run White spells in the main deck; Path to Exile is the biggest reason to diversify in Game 1. White spells are still great for the sideboard, where the cards listed above might be joined by Deflecting Palm, Phyrexian Unlife, Stony Silence, Thalia, Guardian of Thraben, and all manner of other things. There are also some players who fondly remember Goblin Bushwhacker's Standard heyday and include a copy of Devastating Summons; if you're unfamiliar with the interaction, the Zoo player will cast Devastating Summons for as many lands as can be spared (possibly all of them), float mana, surge Reckless Bushwhacker, and deal double-digit damage which wasn't on the board the previous turn. It's risky, since sacrificing the lands is part of the cost to cast the spell, but it also makes tapping out against the deck deadly. Modern players are used to addressing Naya Burn decks, but if they don't have a plan for this new version of Zoo, they are in for a world of hurt.

User mashirorc 5-0'd consecutive leagues with this build, on the more traditional end of what people are building (some Tron versions are hybridized with the R/G Eldrazi lists that run Matter Reshapers,Thought-Knot Seers, and the rest of the midrange package).Sanctum of Ugin has replaced Eye of Ugin in the deck, as casting World Breaker then allows you to tutor for Ulamog, the Ceaseless Hunger; it's not quite the inevitability machine Eye of Ugin was, but it's still plenty good. Tron has long been the deck best positioned to use Firespout, and with as much Zoo as is going around, having three in the main deck is a good call. If the Tron deck can survive the onslaught long enough to hit Wurmcoil Engine, everything should feel better.

Warping Wail had Modern written all over it when it was spoiled, and Tron's happy to have an Instant it can always cast. Spatial Contortion is showing up in some sideboards for the same reason, as now the deck can interact instead of just try for bigger plays than the opponent. Those cards won't be surprises to the best Grand Prix players this weekend, but for those who show up semi-prepared â they know their deck but might not be fully up-to-date on archetypes â hearing "in response" from Tron's going to throw them off.

Oath of the Gatewatch was massively influential in its colorless spells. Shadows over Innistrad has given its graveyard tools to Modern, and Dredge is on the upswing. The worrying thing is five of its six results in the past two weeks are grouped into four straight days. Did other decks figure it out? Maybe, but brewers are still optimizing the build. If it has Vengevine, its creature count is going to be as high as Zoo's; if it doesn't, it can try other things. Of the various flavors, my favorite is the spiciest:

The revitalization of Dredge has been brought about by Insolent Neonate, a first-turn discard outlet with upside, and Prized Amalgam as a smaller but less demanding Vengevine. The basic Dredge staples are all present â Stinkweed Imp, Golgari Grave-Troll, Narcomoeba, Faithless Looting, and Dakmor Salvage have been friends for years â but other slots are up for grabs. Vengeful Pharaoh is in some lists; Shadows over Innistrad surprise Stitchwing Skaab has the upside of flying; Lotleth Troll and Gravecrawler have long resumes.

The discard outlets are in similar flux (though not Flux) outside Faithless Looting and Insolent Neonate. Tormenting Voice is the safe pick, Goblin Lore is dangerous but burns through a large chunk of the deck â and then there's Burning Inquiry, the main reason I picked this build. If any deck can break the symmetry of Burning Inquiry, it's Dredge, but Goblin Lore is as breakable. The difference is Burning Inquiry has a nonzero chance of wrecking the opponent's hand, certainly much greater odds than giving them the perfect hand. In Modern, the opening hand and mulligan decisions matter a ton due to fast starts and the sideboard cards to stop them. If this Dredge deck's facing an Affinity deck which kept a risky septet â say, no lands but with two Ornithopters and a Mox Opal â the odds are only 3/53 that Burning Inquiry will add a backup Mox Opal to the hand, while they're 3/10 that Mox Opal will be discarded randomly. And for any other hand kept because of a single card, Burning Inquiry has that thirtyish percent chance of ruining the keep. I hope some brave soul runs Burning Inquiry at Charlotte and does well enough to get a feature match, because there could be some amazing facial expressions after a devastating random discard.

While R/G Primeval Titan/Through the Breach decks are heating up, as is Nahiri, the Harbinger, quickly becoming the Pitbull of Modern, I'm hoping this deck shows up and goes deep in the tournament:

This is a more known quantity than most of my spicy metaballs. The main deck was the exact same for all four instances the past couple weeks (two each from users teslashock1 and salvagers). Like many breakout decks, this one is formed by having a critical mass of overlapping effects, in this case Manic Scribe joining Hedron Crab as an early milling machine. For being a mill strategy, there are a lot of angles available to win games. Jace's Phantasm can be a four-turn flying clock, Visions of Beyond becomes Ancestral Recall with surprisingly little effort, Crypt Incursion can outpace a Burn deck, and Ensnaring Bridge, the patron saint of weird decks that shouldn't work, keeps Zoo from doing much. Shelldock Isle is a critical source of card advantage; we're used to the Hideaway capabilities of Windbrisk Heights and Mosswort Bridge, but Shelldock Isle is possibly the roughest to face in context.

The sideboard changed among the builds, but they all agree on Extirpate, Set Adrift, and Profane Memento. Leyline of the Void, Inquisition of Kozilek, Surgical Extraction, Engineered Explosives, and Ratchet Bomb were tried as well; it's hard to know the exact right mix. If Nahiri, the Harbinger/Emrakul, the Aeons Torn decks are figured out completely in time for the Grand Prix, then Surgical Extraction will almost certainly be the correct call. As far as mill decks go, this looks like an interesting one to watch do its thing, and it would amuse me greatly to see Eldrazi Winter give way to Hedron Crab Spring.

Anyone who tells you they know what Modern will look like over the weekend is lying to you. There are as many valid decks as there are valid articles discussing the format. Whatever the case, the newest sets have shaken things up big time, and the results should be fascinating.