A staggering amount of Magic content is published each day each day on a plethora of content sites, blogs, podcasts, and discussion forums. No matter how honest an effort you make, it is very easy to fall behind and miss some incredible articles because there just isn't enough time to read everything. To that end, we've collected some of the best articles of the week covering a broad range of topics. If you're looking for articles, these are the ones you don't want to miss!

On Losing and Magic, and Losing at Magic

Paul Rietzl is one of the game's greatest players. With incredible Pro Tour finishes and Grand Prix victories, it would seem defeat is a distant worry for him. However, the current focus on consistent play and the chain of losses he's encountered personally challenged him to look within. What he found was remarkable.

Because I devote so much time, money, and mental energy to Magic, losing causes a unique pain that is both nebulous in its definition and acute in its intensity. This is not to say that a bad tournament will send me into depression, but merely moderate introspection. At worst, a mild malaise. Since Iâm back at work at 8 a.m. Monday morning, I donât have an abundance of time for self-pity.

On the Artist's Touch, Touching on an Artist

Eric Klug is a familiar face to Gathering Magic. A renown alterer and talented artist in his own right, he consistently shares what he's been working on when there's something he finds interesting. In a recent alter we took an image every few minutes through the process, creating a unique look into how a card evolves from a "blank" canvas into a completed piece.

I've had this idea in my back pocket for a while. I've done time lapse video of my process in the past, and a couple of animated gifs compiling process photos, but never anything this extensive. Each frame is 5-10 min of work. I kept myself on an egg timer for over four hours. Very pleased to show the result!

While rules text and mechanics dominate every preview season, Magic wouldn't be the game it is without the art. Jeremy Jarvis is the art direction for the game, and his insight into the process of evolving the look and feel of each guild shows how much attention is paid to visual imagery of the game.

Okay, honestly, Dimir was a challenge. The entire guild was on the DL in the first block and worked completely in secret and in private, so how they were visually represented against the rest of the guilds was not super important. The result was a fairly ghastly looking guild that required a lot of work to update for this new Ravnica. 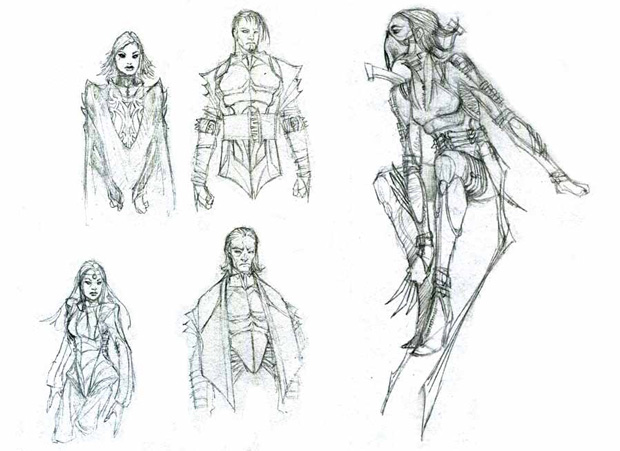 On Why You Should or Shouldn't Write about Magic

There are hundreds of writers over the history of Magic, with hundreds more to follow. Each follow different paths and styles, communicating different information and perspective. Jon Corpora looked back at his own evolution into a Magic writer, distilling his wisdom and cautions about picking up the digital pen.

There is no easy way to become a Magic writer because there's no given way to be successful. If you're not enthusiastic about what you're doing, it will one-hundred-percent show in your writing when you drag yourself to the keyboard to pound out twelve hundred words about some PTQ you Top 8'd. If you want to be a Magic writer, you have to want it.

On Communication Within and Without the Game

Like many games filled with technical skill and strategy, Magic carries a vocabulary of jargon and idioms that make it alien to the uninformed. There is no master list of all these words and phrases intrinsic to the game, but Justin Duewel-Zahniser's list is a well-put way to see and share just how foreign our language can be.

If your first introduction to Magic: The Gathering came by way of unknowingly visiting a gaming venue during Friday Night Magic, this should ring a bell. You may have stood by while people swung, smashed, peeled and ripped. What in the world were they talking about? It sounded halfway between playing baseball and making some kind of fruit smoothie. Magic: The Gathering is not alone among hobbies â it has an entire thoroughly obtuse lexicon.

On the Playing the Game Behind the Gilded Gate

Sam Stoddard has been a figure in the Magic community for several years. After his most recent break from the game he stormed back in a flurry of excellent writing and play, eventually landing a dream job as a developer within Wizards of the Coast. Looking back across his own Prerelease experiences, he blends his former world outside of Magic with the unique position of building it today.

Today, I am a full-time developer, theÂ GatecrashÂ PrereleaseÂ is tomorrow (or as the denizens in the APAC region like to call it, today), and the excitement I used to get from actually playing in the events has been replaced by the excitement of seeing other people experience the set for the first time. Much like in years past, I rushed to Twitter and various Internet forums when the new previews went up each night, excited to see which cards were previewed and how the cards I have been playing with for several months now were perceived by the public at large. As a developer, I do get attached to cards in a set that I either had a hand in creating or just enjoy playing, and it's wonderful to watch people react in similar ways to how I did when I first read them.