This week, we've gotten a few Intro Pack previews that showcase four mechanics that we'll see in Theros. There's plenty of the set we haven't seen yet, but it already looks spectacular. So what mechanics did Wizards choose to bring Greek mythology to life? Let's take a look at monstrosity, heroic, devotion, and bestow. 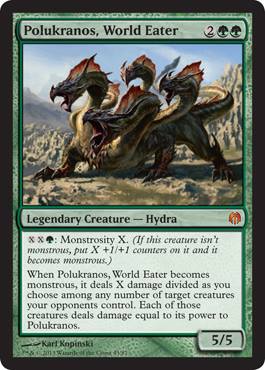 The first time we got a look at monstrosity was on Polukranos, World Eater, when the contents of Duel Decks: Heroes vs Monsters were revealed.

(As it appears on Polukranos, World Eater)

: Monstrosity X. (If this creature isn't monstrous, put X +1/+1 counters on it and it becomes monstrous.)

This mechanics could be awesome across multiple formats, depending on what kind of monstrous triggers we see. Polukranos is an efficient body combined with a one-time mana sink for the late game. If you flood out, Polukranos can eat one or more creatures then dominate the board. Basilisk Collar and Polukranos will certainly be fast friends in casual formats like Commander.

If ramp decks are still viable in Theros Standard, Polukranos could slot right in over Huntmaster of the Fells. Sure, you don't get the lifegain, but a 5/5 body is nothing to scoff at early on and monstrosity makes Polukranos an awesome topdeck at any point in the game. If you want to take a look at some deck concepts for Magic's newest Hydra, take a look at Jules Robins's deck concepts for Commander.

To see what else monstrosity can do, take a look at Ember Swallower and Shipbreaker Kraken over on our visual spoiler. 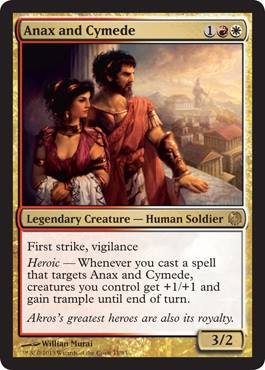 Also from the Duel Decks: Heroes vs Monsters announcement, we got to take a look at Anax and Cymede with the heroic ability word:

(As it appears on Anax and Cymede)

HeroicâWhenever you cast a spell that targets Anax and Cymede, creatures you control get +1/+1 and gain trample until end of turn.

This mechanic is one of the most interesting in Theros, largely because we've never really seen anything quite like this before. Heroic cards are going to want you to be able to consistently target them multiple times in a turn; perhaps with a buyback spell like Seething Anger. Anax and Cymede are particularly threatening because of pump spells. What does your opponent do if you curve out into Anax and Cymede? Do you block and get blown out by any pump spell? What if you have multiple pump spells? Your opponent could just be dead to double Brute Force. How absurd is that?

The really exciting thing about this mechanic is trying to imagine what other kinds of heroic triggers we might see. Draw a card? Make some tokens? Anything is possible. We have seen one other card featuring the heroic mechanic. Take a look at Anthousa, Setessan Hero on our visual spoiler to get an idea of just how crazy these abilities can get. 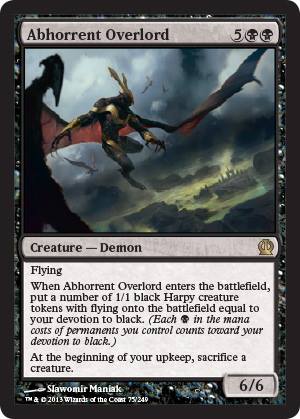 The next mechanic we've gotten a peek at is devotion. Get your Primalcrux and Khalni Hydra ready, because chroma has gotten a reboot:

(As it appears on Abhorrent Overlord)

It will be very interesting to see how this mechanic plays out in Standard, because we're combining a multicolored block with a mechanic that encourages you to commit heavily to a single color. Will we see more decks like the Black-Green Mutilate decks, that are only splashing for a few powerful cards? It depends on how well you are rewarded for your devotion to a color.

One place where I expect to see a lot of this mechanic is Commander. Now you get a bonus for committing to black with your Maga, Traitor to Mortals. These devotion creatures promise very powerful effects for anyone who has a mono-colored general. Imagine looting for devotion to blue, or doubling damage for devotion to red. Even small effects can become incredibly powerful if you are devoted enough to stack them up. 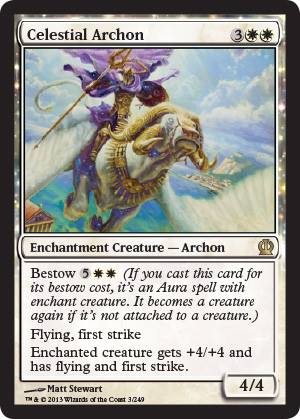 Our last mechanic, bestow, wins the award for the most headaches for judges. Let's take a look at a huge part of the enchantment theme for Theros:

(If you cast this card for its bestow cost, it's an Aura spell with enchant creature. It becomes a creature again if it's not attached to a creature.)

This mechanic is certainly a little cerebral, but the flavor is absolutely spectacular. You can either cast the Celestial Archon, or one of your creatures can receive it's blessing and dominate the battlefield. This is definitely the most complex mechanic is Theros, but it's a sweet one for sure.

So, it's an enchantment creature that's sometimes an aura. Here's the most important thing to note about bestow, straight from Aaron Forsythe, head of R&D at Wizards:

Bestow cards cast as Auras will resolve as creatures if their targets become illegal. May not be obvious, but true/awesome. #mtgths

It's tough to speculate on what exactly bestow is capable of before we know exactly how the mechanic works. Do the bestowed auras have pseudo-persist when the creature they're enchanting dies? I imagine that a Greek god would show up to the party if you killed their champion, but maybe he just wasn't worthy.

This mechanic will certainly see plenty of casual play. It's got awesome flavor, and flexibility is at a premium in kitchen table games. Whether the mechanic is good in Standard or Modern is a completely different question, and will largely depend on how the bestow effects are costed. If there are some cheap bestow cards, we could certainly see Ethereal Armor in the new Stanard. One thing's for sure. I'm glad we don't have to worry about Invisible Stalker and Geist of Saint Traft anymore; though Witchstalker will be hanging around for the ride.

It looked likeÂ Return to Ravnica block was going to be hard to top, but so farÂ Theros is packed with awesome cards, incredible art, and flavor on par with Innistrad. What does the rest ofÂ the setÂ have to offer? Keep your eye on our Theros text spoiler, or our visual spoilers on Facebook to find out!