The last few months of Commander have been all about exploration for me. New commanders, new decks, new ideasâfind some fun, interesting ideas, and see how far they can be pushed. The biggest push I wanted to make was into new archetypes so that I could have a more diverse set of decks to choose from. The kind of deck I wanted to build most of all was a control deck that captured the spirit of classic W/U, Andrew Cuneoâstyle control decks.

The deck I built was an Ephara, God of the Polis deck built around cheating extra lands in with Second Sunrise, Faith's Reward, and Planar Birth and grinding out the long game with Planeswalkers, sweepers, Sphinx's Revelations, and counterspells. I was able to play a few good games with Ephara at Grand Prix Philadelphia, and I think Iâve drastically improved the deck from that first draft. Letâs take a look:

The big theme of this deck is using fetch lands, Surveyor's Scope, and Second Sunrise or Planar Birth to cheat ahead on lands. The biggest constraint on control decks in Commander is generally having enough mana to keep up with the absurd threats people are jamming. When you can consistently gain three or more lands with Scopes and Sunrisesâand you can regularly play Planar Birth for four or more multiple times per gameâmana tends not to be an issue.

Iâve also managed to make some upgrades. Viral Drake makes Planeswalker ultimates a reasonable goal. Trade Routes, Land Tax, and Jace, Memory Adept play straight into your plan of stocking the graveyard with lands while digging for Planar Birth. Theyâre small changes, but they make the deck much more effective. Once you find a fun, powerful interaction, you want to try to push it as hard as you can to see where the limitations are.

The biggest change is that now weâre all-in on the plan of Ghostly Flicker with Archaeomancer. Sure, Deadeye Navigator activates for cheaper and dodges removal. Deadeye has nothing on Ghostly Flicker. Deadeye Navigator canât blink your Jace, Memory Adept or Karn Liberated for multiple activations. Deadeye canât flicker Druidic Satchel and Trading Post for infinite value off Ephara. Perhaps most importantly, Ghostly Flicker enables the endgame of Decree of Silence and Detention Sphere. You know: Itâs that part of the game when you are able to lock everyone out of playing spells and exile everything they have in play. Because fun.

I consider the Ephara experiment largely successful. The engine of the deck, Surveyor's Scope and Faith's Reward shenanigans, is very powerful. Itâs good enough that Iâve been doing math regarding how many fetches a deck has to play before Surveyor's Scope is just a Skyshroud Claim or better. The problem is that the deck canât close games. You can easily set up boards on which you can counter every spell that matters for the rest of the game while sweeping the board at instant speed whenever necessary. But actually killing other players is shockingly difficult when all you have are Emeria Angel and Decree of Justice.

That could be fixed by adding things such as Entreat the Angels, Titans, or any number of other things. The problem is that there just isnât space. This deck has to dedicate a ton of slots to the mana engine or risk falling too far behind in the early turns of the game. Consequently, Iâm interested in trying a different Godâone that generates cards and closes the game out all on its own. Iâm not tearing apart Ephara yet, but Iâm curious to see what Keranos, God of Storms has to offer. 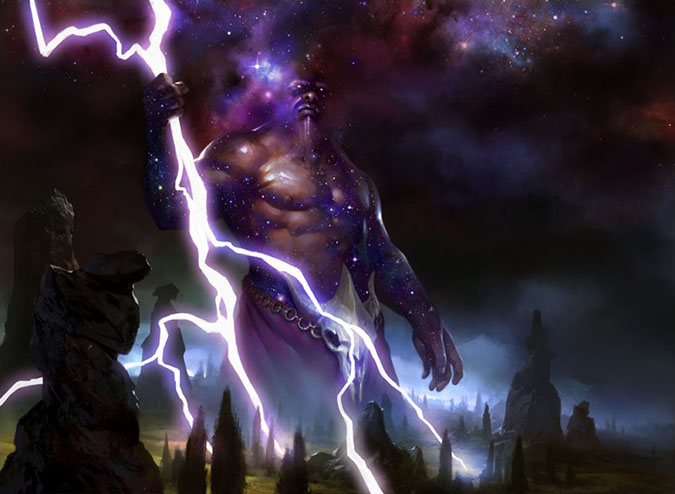 Keranos, God of Storms by Daarken

What Keranos lets us do is ignore winning the game. That will happen on its own if the game goes long enough. In the meantime, Keranos will let us keep hitting lands and keep the board clear of utility creatures, so we can sit on real removal spells and sweepers for as long as possible. With enough deck manipulation, you even are able to choose which effect you get! More importantly, Keranos puts us into red, which gives this deck one of my favorite cards in Commander: Valakut, the Molten Pinnacle.

Valakut can be a powerful engine when youâre not building around it. And when you do build your deck with a Valakut end game in mind, itâs almost unbeatable once you get going. Keranosâs is a deck thatâs looking to hit a lot of land drops. If most of those happen to be Mountains, and if we happen to copy our Valakut with Vesuva and Thespian's Stage, well, thatâs a lot of Searing Winds being thrown around, and we donât have to worry about closing out games anymore.

Hereâs the problem though. Ephara worked because you could put a ton of lands into play early. How can Keranos pull that off? Well, with all the extra library manipulation this deck wants to play, you can lean pretty hard on Druidic Satchel and Terrain Generator to hit extra land drops and keep ahead on mana. That even plays into your Valakut plan by enabling you to hit land drops at instant speed. It may take a little work, but Valakut is almost always worth it.

Letâs take a look at this first pass at Keranos Valakut control:

There are a couple of things that Iâm really excited about in this list. The additional focus on artifacts such as Sphinx-Bone Wand and Strionic Resonator makes Trading Post a lot more exciting. Strionic Resonator copying Keranos is pretty awesome, and it only becomes better when you can go off with Druidic Satchel or Crystal Ball to control the draw steps. You can even dig into Dismiss into Dream to turn Keranos into an Avatar of Woe, which seems difficult for a lot of decks to deal with.

One of the things that I like most about this build as compared to the Ephara one is how aggressive the creatures are. Angel of Serenity is powerful, but itâs not threatening. Bogardan Hellkite and Inferno Titan do not mess around, and they end games very quickly, especially backed by Valakut nonsense. You can also just start flinging uncounterable Comet Storms around, courtesy of Boseiju, Who Shelters All. This deck has ways to just end the game, which is something the Ephara build was sorely lacking.

The card Iâm most curious about is Sphinx-Bone Wand. This is one Iâve heard plenty of good things about and could certainly make the cut in Ephara, and Iâm excited to gain some experience with it. It seems to me that the card is better when youâre playing a ton of cheaper cantrips and card-draw rather than the X spells this deck has, but we have counterspells and Ghostly Flicker to protect it, and the counters ought to add up pretty quickly. Once Sphinx-Bone Wand gets going, it seems really easy to defend Planeswalkers and make opponents dead, which is exactly what this deck wants.

So, there we go: a different take on control that Iâm excited to try out. Iâm curious if the engine of Terrain Generator with Keranos and/or Scrying Sheets is powerful enough to convince me to switch to Keranos for good. Mostly, Iâm interested in finding out if this deck is more capable of ending games or if it lacks the tools to make games go long enough. Thereâs an interesting balance you have to hit when youâre trying to build a true control deck, and I think somewhere between Ephara and Keranos is where I really want to be. I guess the only way to tell is to get more games in.