Congratulations to Chinese Taipei and Puerto Rico, the finalists of the World Magic Cup! The finals were incredibly intense - the Taipei team took down Block, while being up a game in Standard and having split the first two games in Modern. In the end, Puerto Rico's Gabriel Nieves needed to find a Runechanter's Pike on the last turn to send Standard to game three, but could not find it on top of his deck.

Congratulations to Yu Min Yang, Tzu-Ching Kuo, Paul Renie, and Tung-Yi Cheng, the Chinese Taipei 2012 World Magic Cup Champions! The first Magic World Cup was definitely one of the most exciting events we've seen in awhile. From the Chinese Taipei's Miracle Bonfire of the Damned against the United States in the final round of Pools to the repeated upsets by the Team Puerto Rico, the first World Magic Cup will certainly be one to remember.

Everyone glued to the screen here at the World Magic Cup #mtgwmc twitter.com/Marshall_LR/stâ¦

In all seriousness, awesome performances by both Puerto Rico and Taiwan.The #wmc is a great chance for small countries to shine. â Brian Kibler (@bmkibler) August 19, 2012

While the World Magic Cup was definitely the talk of the weekend, there were plenty of other sweet announcements, and plenty more Magic to be played! 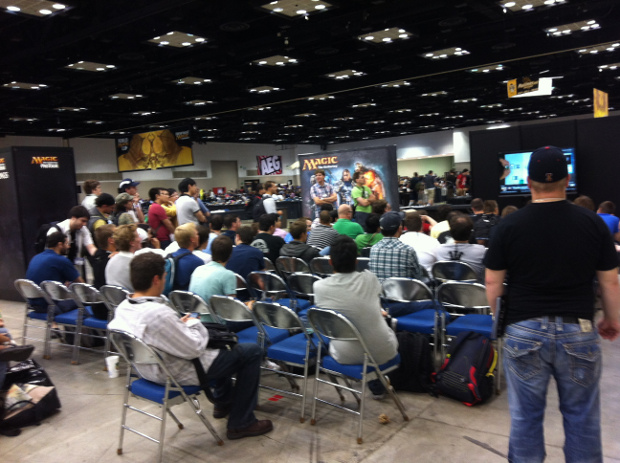 The live audience of the live stream hunkering down for the Finals! 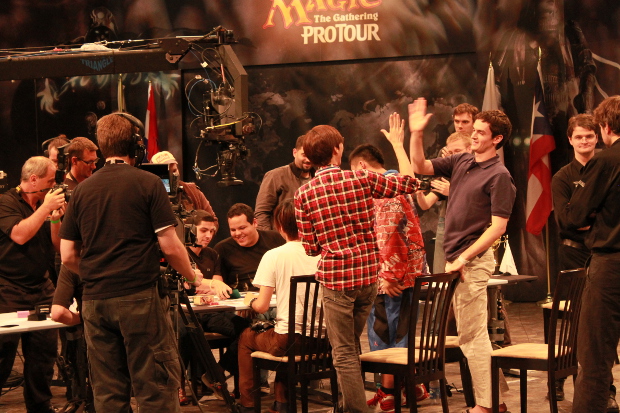 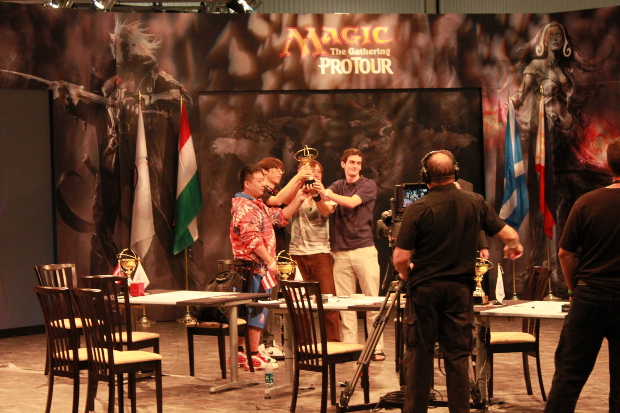 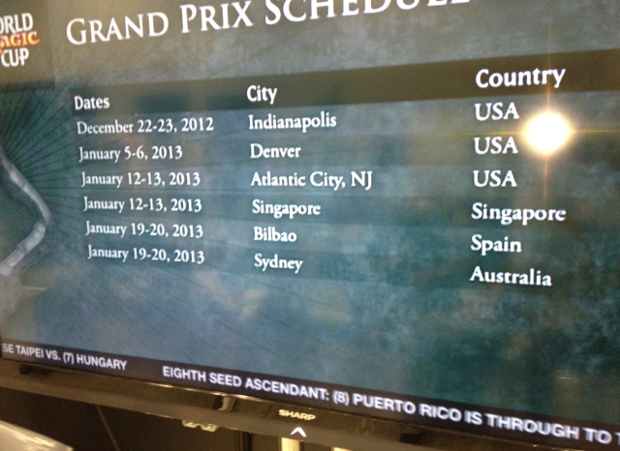 Get ready to make your travel plans! The start of the 2013 GP Schedule has been announced! 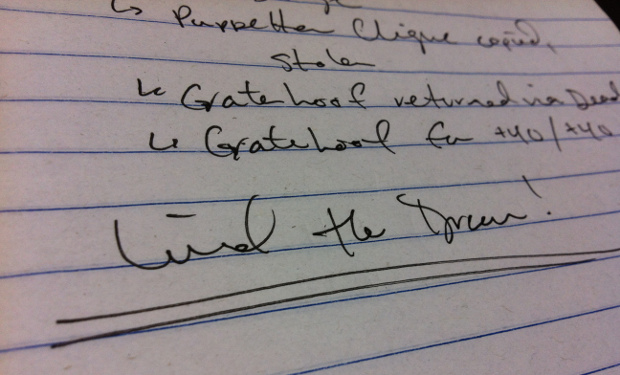 Even if you're not in the WMC, you can stil live the dream at Gen Con!

Congratulations again to Chinese Taipei, the winners of the 2012 World Magic Cup!

After three rounds of Team Constructed, the results are in and we have a bracket for the Top 8 tomorrow morning! You can take a look at the team members and the decklists they'll be playing here, but for now let's take a look at the bracket:

There was a ton of excitement in the last few rounds as some teams locked up their Top 8 berth while others were fighting to sneak into the last few open slots, and it was during those rounds that the most interesting stories came up:

Uruguay didn't have any Modern deck as they were not expecting to go that far in the tournament. DR and Argentina helped them... #MTGWMC â Helene Bergeot (@HeleneBergeot) August 18, 2012

US out of #mtgwmc, rooting for Scotland now and @jechtmurray â Bing Luke (@prolepsis9) August 18, 2012

Board state on a win and in between puerto Rico and the Slovak republic twitter.com/Chosler88/statâ¦ â Corbin Hosler (@Chosler88) August 18, 2012

"End of turn Thought Scour myself," with a Tamiyo emblem in play is just the filth. #mtgwmc â Brian David-Marshall (@Top8Games) August 18, 2012

There was plenty of action in and around the WMC so far this weekend. Thanks to Brendan Weiskotten, we've got some great shots of the WMC and one of the more unique events featured at Gen Con: Vintage Champs. 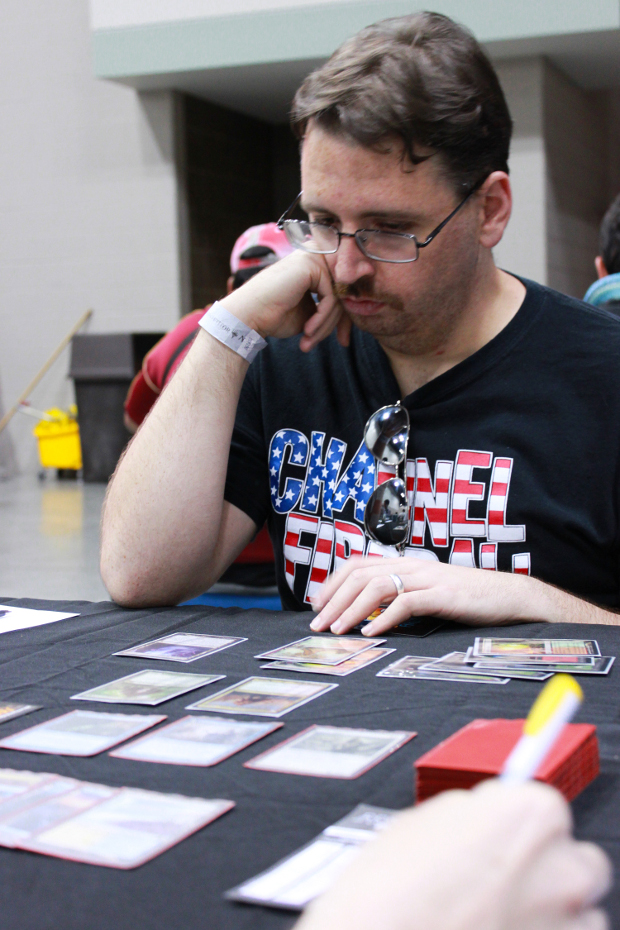 Luis Scott-Vargas is in the tank trying to make the cut for Day Two! 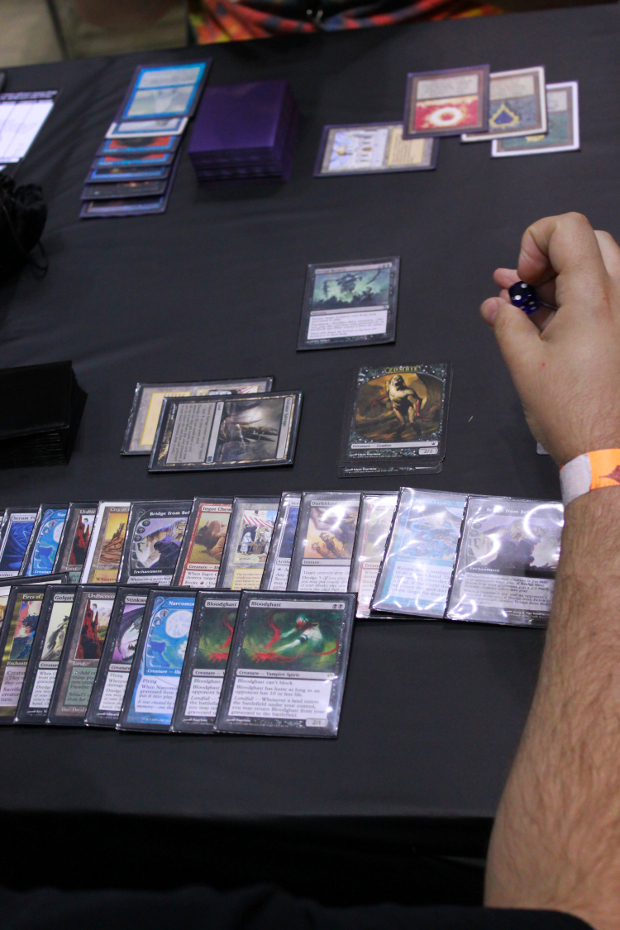 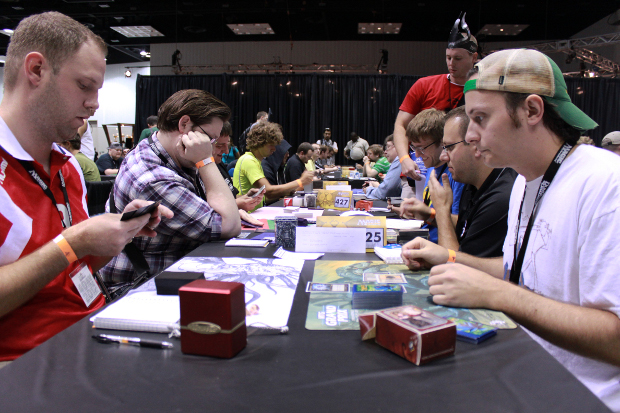 Undefeated players Greg Kraigher (right) and Blaine Christansen (left) face off in Round 6 of Vintage Champs! 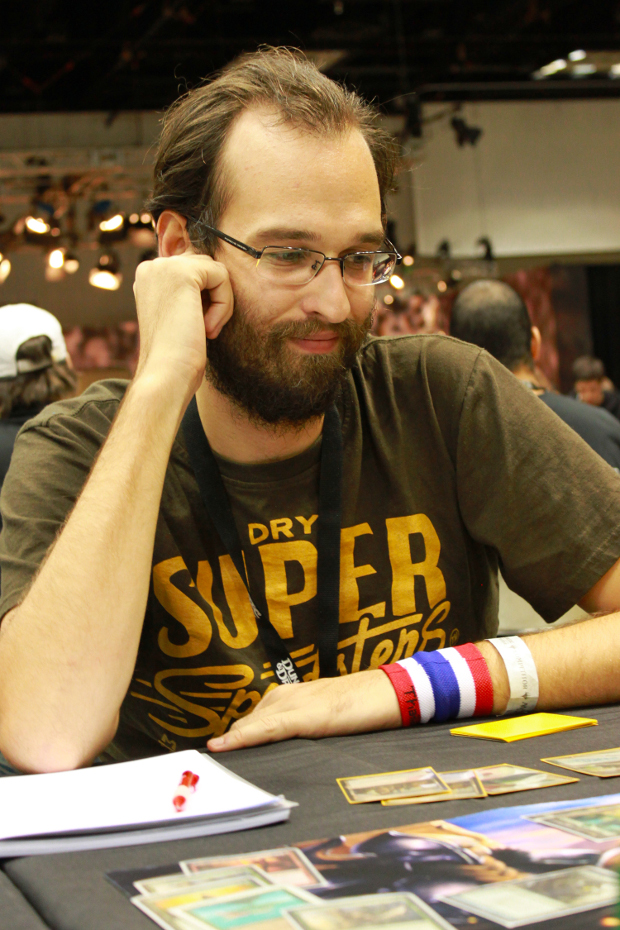 Standard was mostly about Delvers and Zombies, but there were still some Birthing Pods to be found!

Coverage starts again tomorrow morning at 8:45 AM EST. Team Constructed has been an awesome format to watch, and this promises to be one of the most exciting Top 8s we've seen in quite awhile! Be sure to check out the live stream if you can!

After a grueling day of team sealed, the thirty-two teams that made it into day two have been narrowed to sixteen. Players were given twelve packs from which they had to build the three best decks they could. Teams were broken down into pools of four teams and played each other team in the pool; only two teams could could make it out of each pool. Let's take a look:

From here, the teams will play three rounds of Team Constructed in new pools of four to determine which eight will make it to Sunday to play for the title! It's exciting to see how much support these national teams are getting from players around the world. Players and spectators alike seem to love the format of the World Magic Cup!

Canada is done. Puerto Rico and France go through. #mtgwmc

France and Scotland both locked through to the next stage, I think. Happy with that #mtgwmc â Kim Warren (@Fellwolf) August 18, 2012

If you've got the time, be sure to check out the Livestream and official coverage over on DailyMTG.com! The coverage of this event is absolutely incredible, even for people at the event itself! 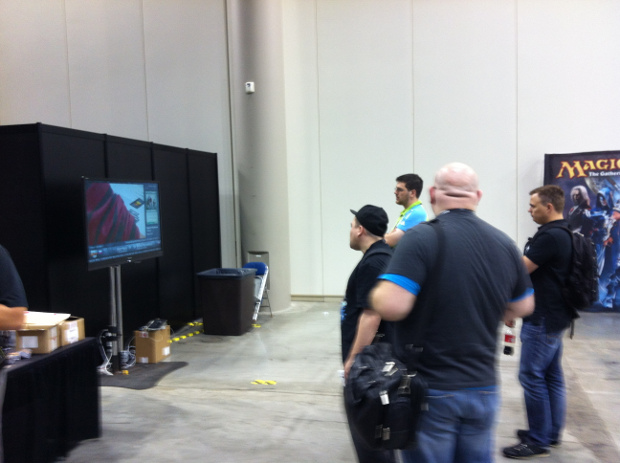 Attendees checking out the WMC Livestream!

Be sure to check back shortly; we're going to be updating with the results from the Team Constructed portion, as well as more snapshots of the WMC and other exciting events at Gen Con!

With four rounds of Standard behind us, day one of the 2012 World Magic Cup is in the books! The top tables were littered with Delver of Secrets, Geralf's Messenger, and Thragtusk; Zombie and Delver variants seemed to be the most popular choices. That said, the results are in, and these are what the top teams look like:

Finally, we've got a few more tweets to wrap things up for the day; a little bit of play-by-play and some of your responses. Â The coverage has been incredible so far, and we've got another full day of it tomorrow!

The live webcast starts again at 8:45 AM EST, so be sure to join in as the competitors head into team play for day two! If you're interested in more coverage of Gen Con, check out our photo diary on Facebook!

I'm pretty sure @mtgaaron should do Twitter coverage for all events. His "real job" isn't that important, is it? #mtgwmc â Kyle Engleson (@Kengy5) August 17, 2012

Friend of @goodgamery Stephen Murray is 3-0 in the #mtgwmc, leading Scotland near the top of the standings.gogogo â Bing Luke (@prolepsis9) August 17, 2012

We're not exactly sure what's going on in this picture, but it's a great example of all of the good times and great people that have made it out to Gen Con and the World Magic Cup. 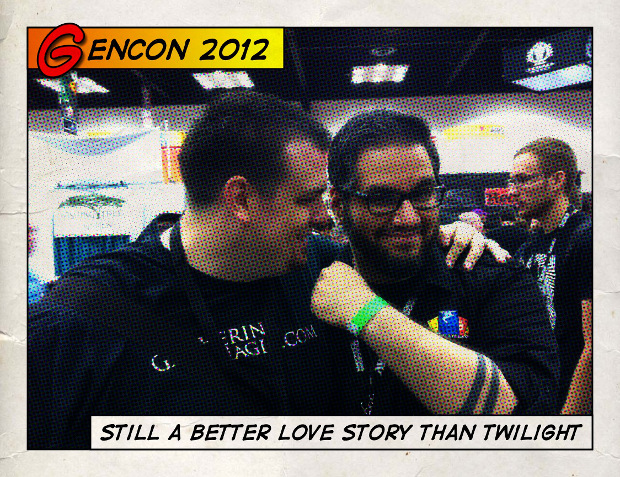 The draft and first round are in the books, and we've already got some exciting action! Between Twitter updates, the live webcast, and pictures starting to trickle in, we've got a pretty good idea of how things are shaping up so far. Â Team Japan is certainly the fan favorite due to their dramatic entrance, but it's still anyone's game! Â Here's what things are looking like from the floor:

Got to shake hands with Brian Kibler and wish him luck today. How's your Friday morning? @bmkibler #mtgwmc #bangencon twitter.com/popeclone/statâ¦

I watched @bmkibler's draft. His first picks were solid if unspectacular, but he was in a great seat for his colors. #mtgwmc #gencon â Aaron Forsythe (@mtgaaron) August 17, 2012

Screw the Olympics.It's time for the World Magic Cup #mtgwmc

We've even managed to catch Gathering Magic's very own Max Sjoeblom (@thebloom_) playing in Round One! 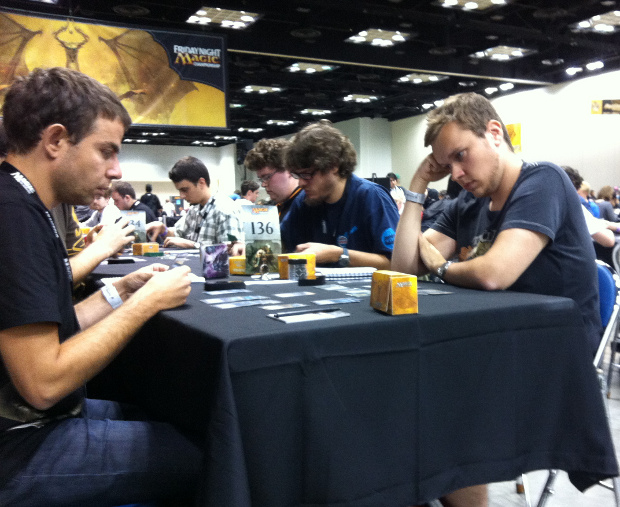 Last, but certainly not least, let's take a quick look at the hardware these players are competing for, shall we? 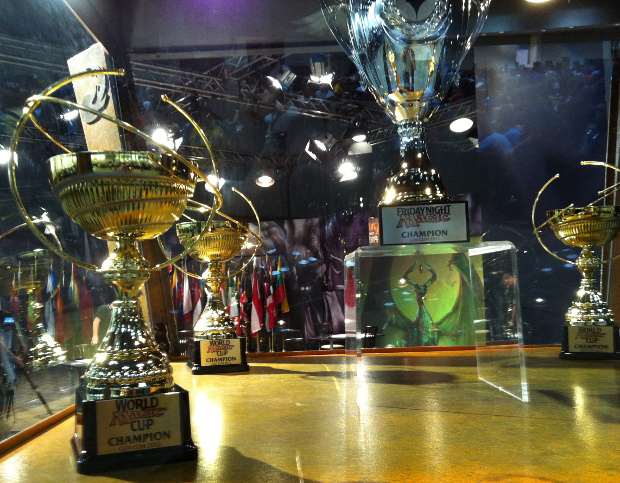 As we post this, the pairings for Round 2 have gone up, and the feature matches are going to start shortly. Â If you're craving more coverage, be sure toÂ check out the officialÂ webcastÂ andÂ written coverage! Â Let us know who you want to hear more about and who you want to come out on top atÂ #mtgwmc!

The first inaugural World Magic Cup is finally here! Â Seventy-one teams have congregated featuring some of the best players in the world to battle it out over three days to determine which team will be the World Magic Cup champions! Even as the official coverage and webcast are getting ready to go live, there's already drama leading up to the event:

Only I touch downed Indy

Team USA is up and ready to take on the world!Let's do this!#MTGWMC #TeamUSA

May the spirits of Michel Platini, Zidane, Guy Forget and Yannick Noah be with us today! #mtgwmc #TeamFrance

Aaaand Team Brazil is off to the #WMC #GenCon !

Look who just stumbled into hotel lobby out of a DC cab to pick up badges. #WMC twitter.com/Top8Games/statâ¦

Gathering Magic will be updating throughout the day with results, pictures and stories from the World Magic Cup, as well as your responses from Twitter! Â Official coverage goes live at 10:45 AM (EST), so check out theÂ webcast and written coverage and get involved in the discussion at #mtgwmc!