We've seen plenty of articles about what Born of the Gods may do to Standard and Modern. But what about your favorite casual formats? Which new toys will be tearing up kitchen tables for the foreseeable future? Join Abe Sargent as he runs down ten of his favorite cards from the new set and shares some of his ideas about their applications.

GatheringMagic.com: Abe Sargent - The Ten Best Cards from Born of the Gods

I love new cardsâjust love âem! Thatâs who we are as Magic players. We are fascinated by new cards. When spoiler season hits, we will read entire articles that discuss the potential that just one card might have. For example, how many articles were written on just the impact Kiora, the Crashing Wave might have on new Standard, Commander, Modern, and so forth. Was she good enough to run? Entire articles sprinkled the âNet, flooded with comments, because we canât get enough of a new set.

By now, you should be used to Born of the Gods overload! Questions abound! Which cards are truly the best? Which God is the worst? Will the low-cost bestow creatures be worth it in Draft? Will heroic remain a Limited archetype? Will Pain Seer be a force in Modern or Legacy? What cards might have an impact in Vintage? On and on, the questions mount.

So today, I am answering a simple question: What do I think are the Top 10 cards from Born of the Gods (in a casual context)? Letâs look and see!

What happens when Magic and faith meet? There have been times in Magic's history where it has been perceived as everything up to and including demonic. Because of that, Magic has tended to shy away from controversial topics like Angels, Demons, and, more topically, gods. This week, Andrew Rogers takes a look at his early experiences with Magic and religion, just in time for Born of the Gods. How do you resolve these two opposing things? Do they have to be at odds? Andrew answers these questions and more.

GatheringMagic.com: Andrew Rogers (@ALRStories) - Born of the Gods? When Magic and Faith Meet and Part Two

As Born of the Gods makes its way into playersâ hands, I canât help but think about the fact that Magic has created a God creature type. Literally, players can now say to each other, âI just cracked a God in this booster.â How wild is that?

Born of the Gods and the rest of the Theros block takes its story and flavor cues from Greek mythology. In Greek mythology the gods were often among mortals, cavorting, warring, and sometimes having babies. But being âborn of a godâ isnât unique to Greek mythology. Other religions claim to have someone of divine origin within their history, too.

For me, beliefs about how the divine meets humanity have been entwined with playing Magic since day one. In the paragraphs that follow, Iâll tell you the story about how Magic has intersected with my faith so far. I hope that by the end of this article youâll be asking yourself this question: How does Magic cross paths with my faith (or lack thereof), and what am I going to do about it?

Goodbye Deathrite Shaman. Hello Bitterblossom and Wild Nacatl. What will the new face of Modern look like in the wake of these bannings? In his article this week, Glenn Jones looks at how the format may shift in response to these changes. Which decks and cards become stronger? Which ones become weaker? Get a handle on the new format just in time for Pro Tour Born of the Gods.

Modern has been weighed, measured, and found wanting by those at Wizards of the Coast. They addressed the issue with the following alterations:

You can read their explanation of the changes in full onÂ this page, but I'll summarize.

Deathrite was too good a card, banning Nacatl didn't do anything but kill the Zoo deck (making it a mistake in the first place), andÂ BitterblossomÂ seems good but not too good.

Fair enough. I'm willing to agree with this assessment for now. As I've said in the past, I'd much rather we experiment with diversifying the format than keep everything under lock and key out of pure fear. More change is more fun, especially given the constant concern that an Eternal format might become stale.

As a side note, I'm amused to see this sentence in the note regardingÂ Deathrite Shaman's empowerment of decks that stifle innovation: "Having a strong attrition-based deck as a large portion of the metagame makes it difficult for decks that are based on synergies between cards instead of individually powerful cards." 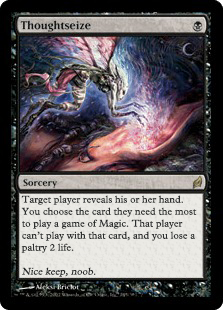 Just kidding, Standard's the funnest! I would never skip a PTQ to go shopping . . . again.

Anyway, back to Modern. Many of you probably clicked on this article in hopes of a well-informed, incisive examination of what these bans might mean for the Modern metagame.

Sadly, all I can offer you are my own opinions.

This change to the list is different from many previous because it simultaneously introduces multiple new elements to the format while neuteringâbut not destroyingâa few high-profile options. That means there's new space to explore but a lot of solid foundation that remains largely untouched.

Adrian Sullivan has played a lot of Magic, and knows a thing or two about building decks. What do rogue decks with a focused, powerful gameplan look like in new Standard and Modern? Adrian shares a few of his brews this week, including a BUG midrange deck for Standard and a Bitterblossom control deck for Modern.

Sometimes it can be hard to write on the same website as Patrick Chapin.

It's not that I don't mind the competition; some of my favorite articles that I've ever written came out of my desire to rebut someone, usually Mike Flores but certainly other people from time to time. I still love a good rebuttal (assuming it is necessary). It can be very hard to do an article with brews the week that Patrick Chapin does an article on brews. Suffice it to say, you will get buried. Chapin hit about 8,000 words in one of his two articles this week, and I thought to myself, "You know, let's move elsewhere."

How are the big teams preparing for Pro Tour Born of the Gods? Find out what the best magicians in the world think about the new Modern and Limited formats and learn about the composition of their teams and their testing process. Find out who the big players are heading into the Pro Tour and get an inside look at the kind of work that goes into succeeding on Magic's biggest stage.

When you look back on the recent history of the Pro Tour, it is definitely the exception to see someone win a title without being part of a large testing team. Both Alexander Hayne and Stanislav Cifka won their trophies with smaller, less formalized teams, but both had experienced support groups to work with. The idea of a superteam is not a recent development. You can look all the way back to the earliest days of the Pro Tour and find The Pacific Coast Legends, Hammer's Hitmen, East Coast Assassins, Team Deadguy, Team CMU, Team YMG, and so on.

The Pro Tour is the most challenging level of competition a Magic player will ever face and it makes sense that players would coalesce to prepare, but the game seemed to change around the 2009 season, when eventual Pro Tour Hall of Famer Luis Scott-Vargas assembled Team ChannelFireball. They would get to a tournament city well in advance and attack the format. There were multiple events where they simply dominated the fieldâPro Tour Paris and Worlds 2011 both leap to mindâand they demonstrated the value of their rigor time and time again.

The next major team to coalesce was the squad led by Jon Finkel, Tom Martell, and Patrick Chapin that has since moved from being sponsored by StarCityGames to being a SECOND, as of yet unnamed, ChannelFireball team. Suddenly, there were two squads of powerhouses with multiple Hall of Famers vying for seats at the top tables. It also seemed to be the tipping point for the rest of the field to start using the template that these two teams had employed to great success.

Suddenly, you had a trophy going to Team Luxurious Hair (since renamed Team TCGPlayer.com) member Craig Wescoe and Team Revolution member JÃ©rÃ©my Dezani after following in the footsteps of the superteams that seemed to have a monopoly on winning for the past few years. It seems like there are even more teams than ever before as we head into Spain, and I caught up with a handful of them for a roundtable about how they are approaching Pro Tour Born of the Gods.

What happens when you rebel and pull against the threads of fate? In Theros, it can mean absolute tragedy. This week Clayton Kroh tells the story of Pavios and Thanasis, two young boys who are unhappy with the lives that lay before them. A forbidden relationship, sudden loss, and divine intervention. Find out what it's like to live on Theros

here was no need to trouble the Agent for this; it simply required Adrasteia's shears. Such a shame, she thought, and sighed aloud. Her two sisters, one at the far end of the enormous and ancient oak table, the other at the side midway between the two, paused their work on a great tapestry spread out between them to look up.

Two threads, one blue, the other gold, which had begun their journey through the tapestry in parallel, had now become intertwined. This happened all the time, and each time it was a new entanglement, sometimes beautiful, sometimes tragic, sometimes both. Such beauty could be found in tragedy; however, Adrasteia did not allow herself to be influenced by what she witnessed among the threads of the tapestry. She must consider the welfare of the whole. These two particular threads had, indeed, created a beautiful pattern as they wound about one another, bordered on all sides by darker-hued threads in patterns that seemed intent upon pulling the blue and gold apart.

The weavework of these two was unconventional, so singular in its expression that even Adrasteia, whose detachment and efficiency were renowned, indulged a longer moment of appreciation. The moment passed, and it was time for her to get to work with her shears on the snarl that had developed in the threads.

The new Modern format leaves a lot of room for brewing, and Caleb is ready to start exploring. What archetypes have the most to gain? What strategies have the most potential in this new format? Where are there new openings to exploit? Caleb shares a few deck lists and his thoughts on how the format will evolve from here.Mo

Unless you've been living under a rock for the past week, you're aware that Deathrite Shaman has been banned in Modern and Wild Nacatl and Bitterblossom have been unbanned.

This article doesn't care whether the changes were good or not. They already happened, and now is the time to dive in and test the repercussions, to find the right place to gain an edge.