When Scars of Mirrodin first came out, I decided I wanted to build an aggressive Kemba, Kha Regent deck. I dug into my collection for all the best Equipment I could find, but I still ended up a few cards short. I decided to try one of the Equipment from the new set: Nim Deathmantle. I tossed in a few sacrifice outlets and some extra cards with enters-the-battlefield triggers, and I figured itâd be good enough. Two weeks later, I was convinced that this card is just a repeatable, instant-speed Recurring Nightmareâa card thatâs been good enough to be banned since the formatâs inception. Nearly four years later, Iâm still convinced that Nim Deathmantle is among the most powerful late-game cards in the format and that the comparison to Recurring Nightmare is more than fair.

Today, I have the pleasure of previewing a Magic: The GatheringâConspiracy card that can be compared to a different banned card: one that encourages explosive, powerful plays instead of grindy, attrition games. This card enables you to do all kinds of absurd things, and it is one that I canât wait to brew and play with. Letâs meet Treasonous Ogre and find out what he can do. 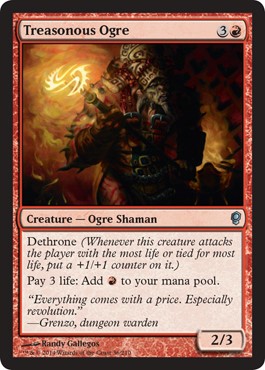 Wow. What else is there to say? What does this justice? This card is really good. This is no Grinning Ignus or Soulbright Flamekin. Forget Cultivate, Solemn Simulacrum, and Rofellos, Llanowar Emissary. Your green ramp is cute and all, but now red gets Channel with a 2/3 body attached! Why would I want to ramp from 4 to 6 with Explosive Vegetation when I can ramp to 12 with Treasonous Ogre?

Treasonous Ogre isnât just any ramp spell though. It enables red decks to do all kinds of absurd things before the other players can bring their defenses up. Now red decks have another Sol Ringâtype effect that puts you so far ahead early that you can steal games before decks of other colors can bring their engines online. You can put Treasonous Ogre into play as early as turn two with a Sol Ring or turn three with a more reasonable Mind Stone or Coldsteel Heart. From there, you can do almost anything. You can continue curving out and still spin your Sensei's Divining Top every turn. You can pay 18 and cast Inferno Titan or pay 30 and cast Kozilek, Butcher of Truth. The sky is the limit.

Treasonous Ogre isnât just a pseudo-Channel though. You also have a very reasonable body for 4 mana. A 2/3 is reasonable, but dethrone is a deceptively powerful mechanic. That blue mage? Sheâs not going to be playing many creatures; you can sneak a few hits in. In two turns, you have for yourself a 4/5 that can continue brawling through utility creatures and become a board-dominating threat in short order.

So, this is an incredible effect on a reasonable body. Itâs obviously powerful enough to see significant play. Where does it fit in? There are only really two kinds of decks that are interested in spending a ton of life at a time for short-term advantages: the kind that ends the game before it matters and the kind that can gain the life back. Letâs take a look at a few decks that push these themes to find out what Treasonous Ogre is capable of. Weâll start with a twist on Jules Robinsâs build of Purphoros, God of the Forge:

So, the game plan here is pretty standard: Stick Purphoros, make tokens, deal damage. Where does Treasonous Ogre fit in? This deck is mana-hungry. Your curve basically starts at 4 with Purphoros, and most of your cards cost at least that much to start generating significant tokens and damage.

Treasonous Ogre lets you cheat ahead on your curve and start casting multiple spells per turn on turn four or five instead of on turn six or seven. Applying serious pressure to the rest of the table a few turns earlier is a big deal when youâre trying to kill everyone as quickly as possible. The problem is that itâs a little rough to start spending 9 life a turn starting on turn five. Thatâs where the life-gain Equipment comes in.

Itâs pretty easy to turn Purphoros into a creature when Treasonous Ogre lets you turn life into red spells. When Purphoros is a creature, you can suit it up with Basilisk Collar or Loxodon Warhammer. At that point, you have for yourself a nice engine going: Pay life to cast token generators. Token generators deal damage, and that gains you life. All thatâs missing is a Skullclamp or a Culling Dais to start generating cards as well.

Even if that engine doesnât come together, you can funnel life into Purphorosâs activated ability to generate even more damage. The idea is that Treasonous Ogre will either enable you to end the game early enough that paying a bunch of life wonât matter or youâll be able to give Purphoros lifelink to offset the life-loss. In this shell, Treasonous Ogre is an explosive mana accelerant that lets you end games before they get started.

But what if tokens arenât your thing? What are some other applications for Treasonous Ogre? Instead of using the Ogre to be aggressive, the next list I want to look at uses Treasonous Ogre to pay for expensive Equipment costs to go over the top of other decks. Letâs see what Godo, Bandit Warlord can do with this new toy.

Unlike the Purphoros deck, this Godo list isnât interested in paying a ton of life every turn to pull ahead early. Like before, this deck is mana-intensive. You have spells to cast, Equipment to move around, and attrition enginesâsuch as Trading Post and Nim Deathmantleâto spend mana on. Treasonous Ogre smooths out your curve by letting you activate your artifacts while continuing to cast spells every turn to help you pull ahead on the board. Treasonous Ogre allows this deck to play a more attrition-based game by getting more out of each of its turns than opposing players.

Additionally, Treasonous Ogre gives you a chance at going infinite with cards like Aggravated Assault and Hellkite Charger. Before, you only had access to Sword of Feast and Famine to generate the extra mana you needed. Now Treasonous Ogre will generate all the mana you want if you can gain enough life in each combat step. Even if you canât gain enough life to go infinite, you should be able to gain enough to take two or three combat steps and kill a few opponents with commander damage.

The other decks were pretty tame as far as combo potential goes. This Brion deck throws caution to the wind and tries to go big with Treasonous Ogre. Brionâs lifelink with his ability to Fling creatures at your opponents means youâll have plenty of life to play with. Conveniently enough, Treasonous Ogre generates the red mana we need to cast enormous monsters and start throwing them around.

Flinging one creature at a time is boring though. Letâs talk about flinging infinite creatures. With Thornbite Staff to untap Brion, youâre already most of the way there. When you fling Su-Chi, it pays to rebuy itself with Nim Deathmantle and generates enough life to activate Brion again. Easy infinite! Sun Titan plus Angelic Renewal or Gift of Immortality is infinite as well. You can Sculpting Steel Thornbite Staff and give it to Adarkar Valkyrie to get there, too. You could even play Reveillark, which rebuys both Karmic Guide and Treasonous Ogre, which generates yet another infinite loop.

Of all the decks weâve looked at today, I think this is the one that best takes advantage of Treasonous Ogre at all phases of the game. You can ramp into Titans and Dragons early to apply pressure. In conjunction with Brionâs lifelink, you can use it to smooth out your curve and pay for more actions per turn than your opponents can afford. On top of all that, Treasonous Ogre gives you multiple ways to just end the game immediately once you put a Thornbite Staff into play.

The most exciting part about all of this? This guy is absolutely absurd, and I know this is just scratching the surface of what Treasonous Ogre can do. I barely touched on multicolored possibilities, and I stayed away from some truly degenerate applications such as storm combo and turboing out Krenko, Mob Boss or Kiki-Jiki, Mirror Breaker infinites. With a card this powerful, the options are limitless.

Keep your friends close and your enemies closerâwith Treasonous Ogre around, no one is safe.