After my last article, in which I discussed the importance of being organized, Andrew Rogers asked me a couple questions: How do you organize your cards right now? Do you use a program? Do you keep lists of your decks?

Normal people would answer these questions in a couple of sentences. Anal-retentive people might write a few paragraphs.

I write an entire article.

How you organize your cards will depend on two things:

1. What Do You Want from Your Collection?

If your collection is made up of cards in decks and other cards you donât want, youâre going to want to find the best way to display your cards to make trades that are best for you. You arenât really concerned about the cards, you are concerned about what others will think of your cards.

In either of these scenarios, you are looking to display your cards for people to enjoy them. You donât want them in a long, white cardboard box since no one will see them that way. You probably arenât going to group cards together with an elastic band, either, since that is likely to damage the cards.

If you are building decks with the cards you own, you will want to organize your collection in such a way that you can readily find the cards you have that do particular things. This is less about what you put your cards in or how you store them and more about how you organize those cards.

When organizing your cards, the size of the collection also affects how much organization you will need to do. A collection under a thousand cards can probably be organized by color and be completely accessible. For a larger collection, you may want to break it down even further (creatures, noncreature spells, and lands for example) if you are organizing to locate specific cards.

Once you start looking at all the variables, the optimal way for each of us to organize changes from person to person.

This is my collection. 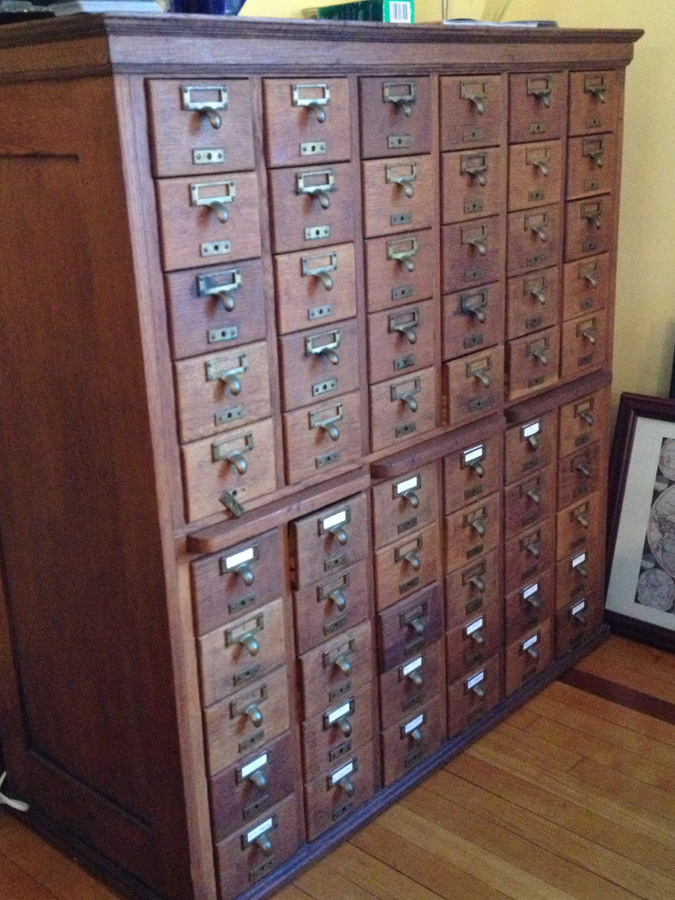 My collection used to be stored in several large four-thousand-count cardboard boxes. It was unruly and ugly. Dragging boxes out of the closet whenever I wanted to build a deck was a big enough pain that I often found myself choosing not to build decks because it was too much hassle.

I happened to be traveling in Rochester and went to Boldoâs Armory. They were using several card catalogs to hold Magic cards, and it seemed like a brilliant solution. It looks nice in our living room. Every guest comments on it and is surprised when they see what is inside.1 It also keeps the cards from cluttering up the house. With the cardboard boxes, the dining room table was in constant disarray. For both of these reasons, my wife really liked the card catalog. It doesnât hurt that it is straight-up awesome. It holds my twenty-thousand-plus card collection and isnât even half-full yet.

With six columns of drawers, I have a column for each color, and the last column is for colorless, gold, and nonbasic land cards. Nothing too crazy just yet, right? 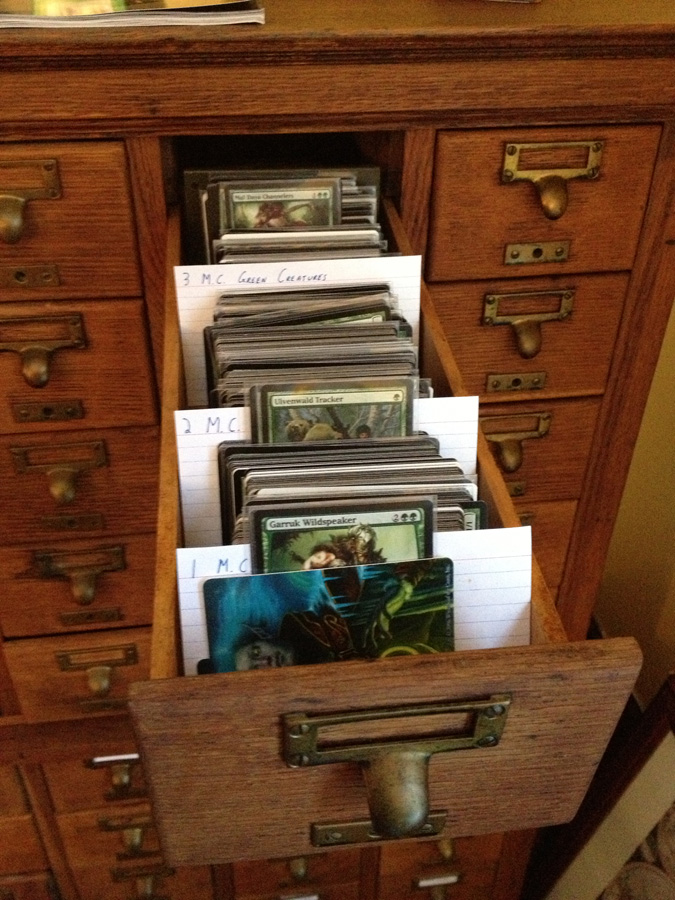 That works for creatures, but noncreature spells donât make sense that way. Sorting these cards by mana cost would be close to pointless. When Iâm looking at these cards, Iâm generally looking for a particular effect or ability on a card. I want a card that does direct damage, that steals a creature, or that bounces creatures. 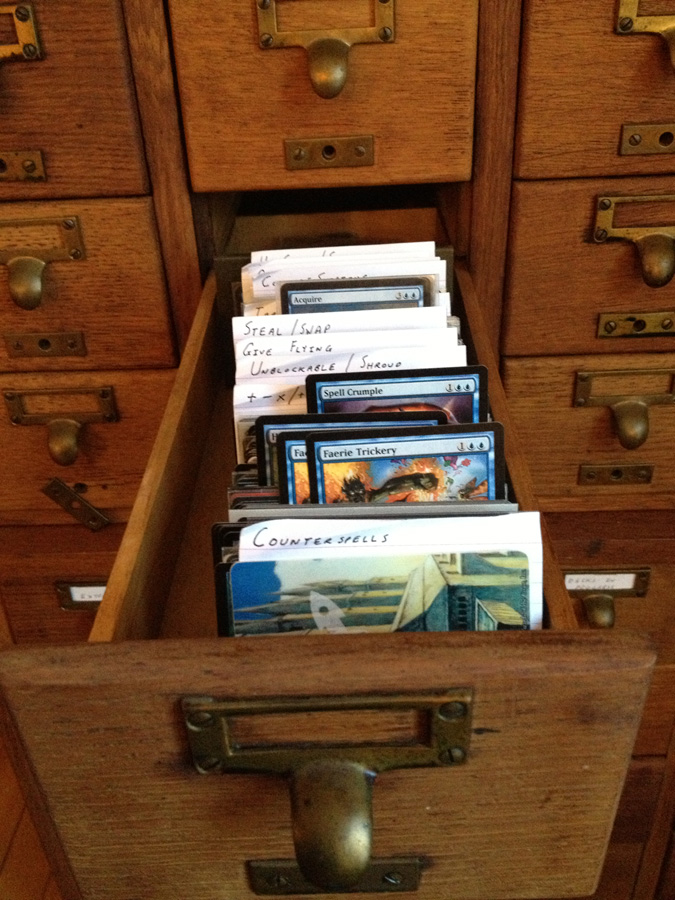 I went through each colorâs stack of noncreature spells and started grouping them based on what the cards do. Not surprisingly, many cards do the same or similar thing. Once I found four different cards in my collection that did the same thing, I created a tab for it and grouped those cards under that tab. The cards that do something unique are grouped together under an Other tab. The cards that do multiple things (Martial Coup, for example), also have their own tab. This system isnât perfect, but it is the best system I can come up with right now.

This just got crazy, right?

While my level of organization is probably far more effort that youâd want to make, it is best for me based on both what I want from my collection and the size of my collection. Just to give you some ideas, I thought I would share some of the ways Iâve seen other people store their cards. 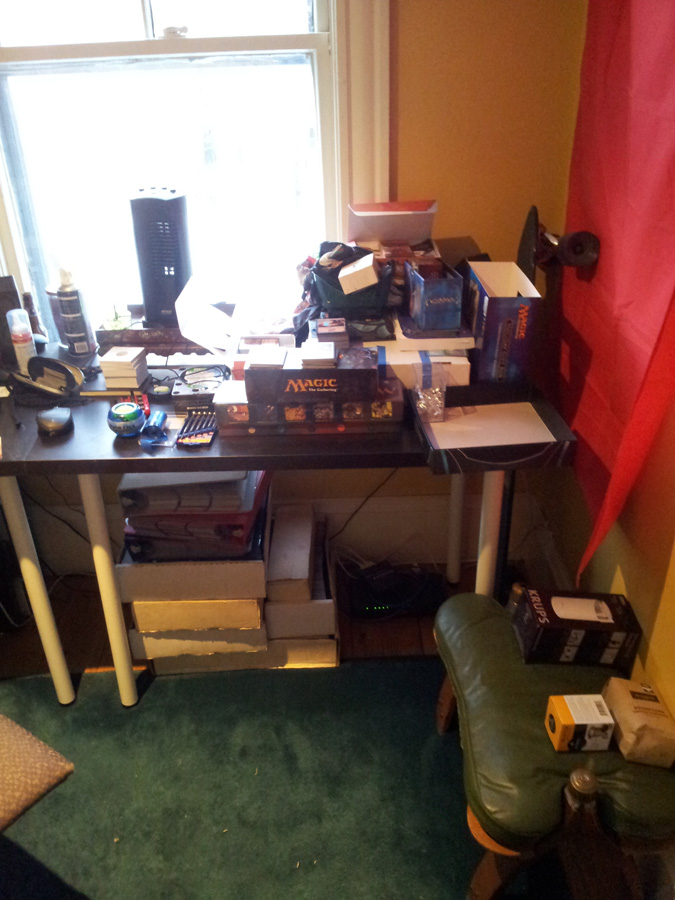 Binders are very common. Large three-ring binders, stuffed with three-by-three card pages, lining shelves are found at many stores. Many tournament players use this method, keeping all their Standard-legal cards in a binder (or groups of binders). As the cards rotate out of Standard, they are put into binders or a particular set or block, depending on the size of the collection. Binders are also popular with traders as they transport easily. 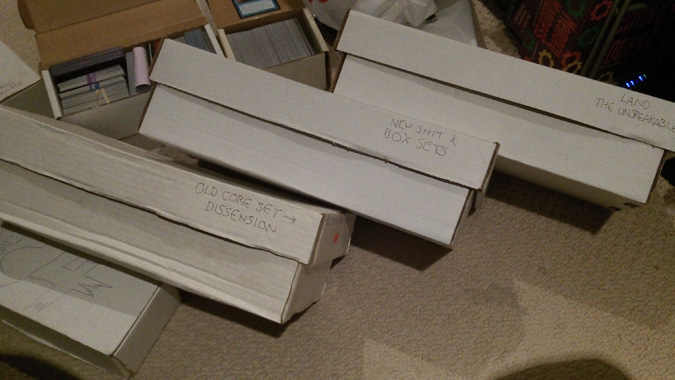 Card boxes are the standard for people with large collections. The sheer volume of cards demands a way to store cards that maximizes the space available, and card boxes do that. They also allow you to move large quantities of cards around quickly, so if you have an organizational system like Andyâs (pictured above), you can easily move New Shit to one of the other boxes when it is no longer New Shit. 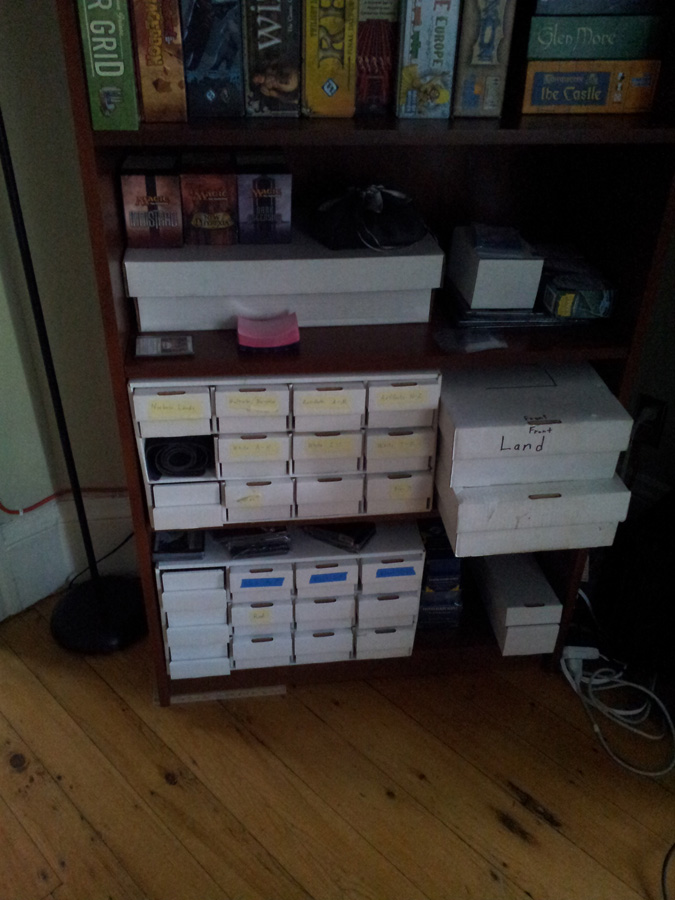 The card storage hotel is another way to maximize surface space without simply stacking the boxes on top of each other. George has specific cards in each box, labeled accordingly and easily accessible when he is deck-building.

While you will choose the best way to sort your collection, there are some common themes. Players who are at all interested in Standard tend to group Standard-legal cards together, with a separate box for the cards that have rotated out of Standard. Some players who have been playing longer group cards by set. Many players group by color. The amount of sorting beyond these initial efforts seems dependent on the size of the collection.

Another thing I heard from many of the people whom I spoke to was the importance of limiting the number of copies of cards in their collections:

Jesse Lyons from Castles and Cooks and jestergoblin: âI generally keep four of each card with the exception of staples, like Brainstorm or Counterspell, where I have around twenty copies.â

Adam Styborski from pretty much everywhere but primarily GatheringMagic and DailyMTG.com: âI sell/trade most of my rares and valuable commons/uncommons. (Did you know that Searing Spear was worth 0.10 to CoolStuffInc? It matters when you have forty copies.)â

Andy Chapman from CommanderCast: The real key to keeping a collection organized is culling it ruthlessly. Every now and then (usually when I build a new deck or get new cards), I go through my cards and take out all the excessive copies (over four) and all the true garbage (Pillarfield Ox). These cards are used for starting fires, target practice, or a quick snack in desperate times. I also give a LOT of cards away.

Software can all but eliminate your organizational demands. Three of my friends are using or have used a variety of programs.

Brandon uses spreadsheets to keep track of his collection, going as far as including fields for quantity and a shorthand rules text so he can search for the cards later on.

Tyler created his own program, but he is still working out the kinks. It is currently a list of cards, with the color of the card and how many he has in his collection.

George uses the Magic Assistant. This open-source program updates with each Magic set (sometimes a little slowly), and the system does occasionally crash. George normally keeps all the cards from a recent set separate from his collection and then updates his collection after a few months. This has the added benefit of allowing him to put most of the cards he acquires from a set into the system at one time. This system, as well as regular backups, makes the Assistant a great tool.

I am tempted to try Magic Assistant at some point in the future, but the sheer volume of cards means that putting everything into the system will take a long time. My concern is always whether that system will continue to update. Wizards of the Coast has a penchant for allowing Magic-related software programs to exist for a while before suddenly shutting them down. I would not want to put the effort into loading all my cards into a database only to have Wizards shut it down.

As my collection grows bigger and bigger, I more often find myself building my decks with Gatherer or MagicCards.info databases, then searching to see if I have the cards or a card that does something similar to the cards Iâve found. Several people I spoke with for this article use this deck-building method. This style of deck-building doesnât require me to sort my collection the way I currently do, but I want to be very sure Iâm not taking advantage of the way I currently sort my cards before destroying all my work and resorting my cards.

With so many variations in how you can organize your collection, there is no best way for everyone. The most helpful suggestion I can make is to think carefully before you start. Any effort to organize is only useful if itâs comprehensive. Be sure what you are doing will work best for you before you get half-way through and realize your mistake.

My thanks to Adam, Brandon, Bryan, Daryl, Jesse, John, and Tyler for their help with the article. Special thanks to George for his input and the photos of the binders and card hotel, and to Andy for his e-mail and the photo of his cardboard box system.