Just eighteen cards of distinction remain in going through the best crafted game pieces in the long and varied history of our favorite game. It's been a true joy looking at cards that aren't Uro, Titan of Nature's Wrath, even if only for a little while.

We'll be looking at eight cards today, and very soon, our final installment will finish things up.

If you'd like to catch up on all the wonderfully designed Magic cards we've seen so far, here is the breakdown:

Everyone stand back. I'm about unleash my penultimate... opinions. 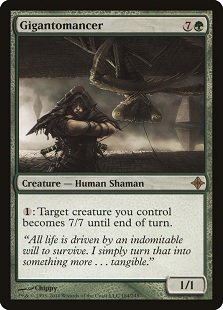 How do you make a 1/1 for eight mana seem interesting?

Seriously, though, this is a card with a ton of tension built into it, it's costed in a way that makes it seem like Magic sometimes gets to be played past the first few turns (big plus), and the entire thing reeks of creative and digestible fun. It's a fun journey to understand this card. Regular readers of this series know that's a common feature.

On top of all that, it's in a set about how the organisms living on an already hostile plane of existence are coping with Cthulhu space monsters. Learning to make your own monsters is one such idea, which explains how this card could conceptually exist at all in the set.

Man, I miss when Magic had subtext. I know it doesn't make for much in the way of shareholder pleasing, which is what flies these days, but there's something to be said for creating something inspired and lasting. (Inb4 "Garruk's Big Monster Maker" at mythic.) 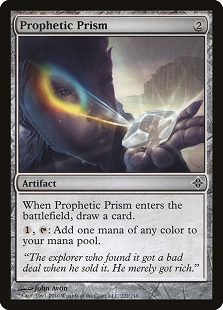 It's as cool as reasonable Mind Stones are ever going to be. It's impossible not to enjoy a Mind Stone, in general, and this is one that enables way more creative fun.

It's no wonder people loved Rise of the Eldrazi. These cards rule. 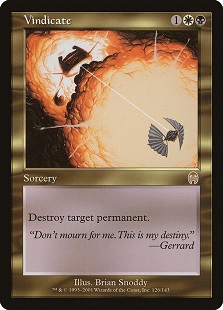 You could have absolutely zero idea who Gerrard Capashen is and no idea what the entire Weatherlight story was, and you'd instantly understand the moment occurring in the card depiction just from reading that miniscule flavor text. It resonates so much using so little.

Oh right, and the card is an unbelievably eloquent way to balance a flexible, necessary effect. Cards like Pernicious Deed landed on the wrong side of Planeswalker interaction, but Vindicate, and a few others we'll look at today, can count the ability to interact with troublesome permanents that didn't even exist at the time they were first printed among the major reasons they remain such enduring Magic designs.

doesn't seem unreasonable either, to be honest. 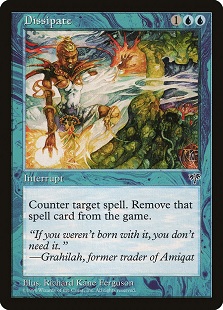 Speak of the devil!

Counterspells have been trouble to cost in a balanced way relative to the apparent goals of Wizards of the Coast for a long time. Counterspell was too good, Mana Leak was often too good, and Cancel without additional text just isn't a live card.

Either way, as Magic continued away from Mirage, the exile zone became more important. Innistrad's printing gave Dissipate a contemporary context to work with, and now we rarely go a year without some variant of

Dissipate is the epitome of a card printed way too early to be appreciated. Now we know better. 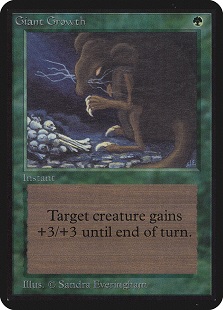 It's the opportunist's Lightning Bolt! A burn spell for the hardworking smartass!

While other cards that sneak three extra damage or three extra power or three extra toughness or more of all of the above are a dime a dozen, this one was first. And although many variants come and go, none of them escape the spirit of the original interactive combat trick.

So much of the spirit of the Magic play exchange is tied up the exact kinds of bluffs this card used to create. Pumps for combat aren't really a thing much anymore (creatures can both Giant Growth and be creatures now; using just the Giant Growth half is kind of pointless), but they embody one of the self-asking questions most adored by players to this day: "Do they have it?" 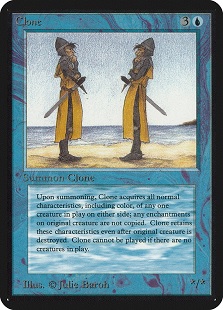 If you want a lesson on eloquence, check out this card's sister: Vesuvan Doppelganger.

Clone's effect started as a bunch of confusing text noise, but since the game has cleaned up most of that, all while preserving Clone's original functions, we can appreciate it more. After all, just like "mill" or a bunch of other belated text shrinkings, at this point "clone" could almost be its own keyword.

The variants never stopped and there's basically no limit to what vases you can make with Clone clay. Phantasmal Image, Phyrexian Metamorph, Shapesharer, Renegade Doppelganger...

They are legion. They are clones. (There's even a card called Clone Legion! They do it all!) 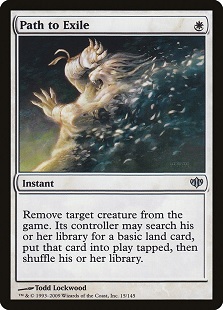 Can you imagine if fetchlands and crap like Attune with Aether hadn't made us dread the durdle periods of shuffling in Magic games? Can you imagine how much more this card would rule?

And the thing is... it already does!

This card was received as Swords to Plowshares 2.0, and it's closer to Swords to Plowshares 0.7 or something. In fact, one of the masterful touches of this card is how strangely it can secretly affect the game in places far, far from when it was first cast. Players sometimes only notice the most immediate effects of Magic games or have a recency bias toward the causal chains that lead to game outcomes. A good player appreciates just how warping the Path to Exile was, no matter when it happened in the game.

Having one extra land creates a radically different causal landscape during a Magic game, but so too does removing a crucial creature. You can sit and contemplate on this spell forever and still barely scratch the surface. And yet, it plays so easily!

These days I'd bet Path would be played, but I'm also thinking it might be deceptively ineffective. Though it's hard to lose on the tempo end when it comes to cmc one removal spells at instant speed, I wonder what Path to Exile would do in the immediate present. Are creatures so good at doing things when they enter the battlefield now that Path to Exile would be counterproductive? Should that bother us? 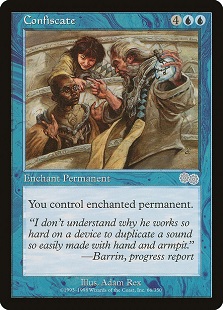 Just outside the top 10 on breakers lies this enchantment, another in the long line of fortunate "can deal with planeswalkers" cards that just happened to be on the better side of history. Control Magic was an early cut from core set reprints, eventually replaced by Mind Control. Cards like Volition Reins played with the formula some, but there's just no escaping the eloquence and fairness of having to give up your best asset for

. Compare to Agent of Treachery. Then laugh at where we are right now. Or cry, either is justified.

I certainly love the way it interacts with Planeswalkers ready to ultimate. Get blowed out, kid!

That's what dreams are made of, people.

Stay tuned because the final ten cards are on the way. The greatest ten Magic cards ever designed, developed, and released. What do you expect to see?