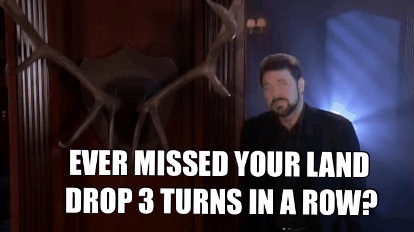 As we discussed last week, the beauty of Commander is that it is so many different things to so many different people. But as it is 2020 we live in the golden age of Internet... ah, discourse, let's call it that... and everyone seems to have their own ideas about what is definitely true or good when it comes to Commander, and correspondingly what is definitively false or bad.

So today, let's channel our inner Jonathan Frakes for a little Fact or Fiction: Commander Edition.

One of Commander Twitter's favorite pastimes is the posting of one's latest decklist seeking feedback, and the exceedingly common feedback saying something to the effect of, "Looks okay but you did it wrong and here's how to fix it." Of course, no one ever phrases it quite like that, but the sentiment couldn't be clearer.

As the format has grown in popularity there has been an unending push to try and "standardize" it, so to speak. It's natural for us to want to know as soon as possible whether the deck we've built is going to work, and so there has developed a sentiment that there are tidy little boxes to be checked as we brew.

Of course, this being Commander, it's rarely that simple. Take land counts as the prime example. For everyone who thinks any Commander deck should have at least 36 lands, to use a random number, there are just as many others who'll say 36 is too many. I've lost count, pardon the pun, of the number of times I've posted a decklist and had one person say, "WHAT ARE YOU DOING, FOR THE LOVE OF HOT DAXOS YOU HAVE TOO MANY LANDS YOU'RE GONNA FLOOD ARE YOU CRAZY" and another say, "WHAT ARE YOU DOING, YOU NEED MORE LANDS HOW ARE YOU EVER GOING TO CAST SPELLS STOP THE INSANITY!"

This is why I've never been a fan of the many attempts to break down any hypothetical deck brew into checklists - this many lands, that many removal spells, exactly this many creatures, absolutely no more than that many board wipes, and so on. I get where this comes from, I really do; a lot of people need - or feel they need - that framework in order to build a successful deck. But as is so often true in Commander, there are always exceptions to those "rules" and, in my experience, far more exceptions than not.

So, while I get the sentiment and its origins, and acknowledge that it absolutely does work for some people, I think it's clear that Commander is not now nor will it ever be a format that's ever going to be universally standardized top to bottom.

Netdecking is the wrong way to build Commander decks.

I'll admit I am not a fan of "netdecking", a term that's come to carry some serious baggage with it in recent years. I've always preferred to build my decks from the ground up, and while I'll use other people's decklists and resources like EDHREC as tools in the process, if I'm building a deck it's almost always going to be from whole cloth (or close to it).

But I must reject the notion that there is a "right" or "wrong" way for any given player to assemble a new deck for themselves. Decklists are everywhere - there's one coming up later in this article, as there always is - and I don't think anyone should ever feel bad for seeing a list that they like and replicating it for themselves.

Besides, because Commander is an Eternal format with new cards being printed into it virtually every month, no deck is ever "complete". Decks constantly evolve as the card pool grows. And even if someone takes a list from me and builds it, sooner or later that person will decide to make either small tweaks or wholesale changes. That's what we do. We build, we play, we adjust, we adjust, we adjust, we adjust... ad infinitum.

I tend not to "netdeck" myself, but there's nothing wrong with it, and no one should be made to feel bad for doing it.

White is the weakest color in Commander.

Let's get this out of the way - I don't believe there is such a thing as a "best" and "worst" color in the format. "But Green," you're gonna say to me - and I will say...ok, you have a decent point.

But seriously, I find these discussions overly reductive and more than a little tiring. Yes, Green absolutely has the most good tools. Yes, any given deck is likely to be in a better position to win if it includes Green. But if we follow these lines of logic all the way to the end, the result is we should all be playing Green in every single deck. That's fiction.

On the other side, White's struggles have been well catalogued - it has trouble drawing cards, even more trouble ramping consistently, and if a White deck falls behind it can have a lot of trouble digging out of the hole.

White has gotten quite a few new toys lately, some extremely helpful:

As the proud player of a Mono-White deck, I feel confident saying White is better positioned as a single color now than it's ever been.

I can't and won't deny the realities. White is a tough color to crack. It tends to live in a narrow space - creatures, life gain, janky alternate win cons (Approach of the Second Sun et al). It doesn't ramp as well as Green, draw cards nearly as well as Blue or Black or juice the combat phase as well as Red. On balance, building a Mono-White deck that can reliably win games is going to be tougher than other colors.

So, while I still don't love referring to it as the "worst" color in Commander, I'll admit it does have the biggest hill to climb, and therefore I'm comfortable labeling it the "weakest" color.

You can build a whole deck around Fact or Fiction effects.

The card named Fact or Fiction is a Commander staple for good reason. In any given game, players want to see as much of their decks as possible and effects like this one are very helpful. It can serve a number of purposes beyond just providing a sneak peek at what's coming up in your library.

Commander is a game about politics, even if you don't consider yourself a "big political player". Sure, we each do our own threat assessments, but in the course of almost any Commander Game 2 or more players will decide to work together in order to deal with one overarching threat. Fact or Fiction effects can help facilitate those alliances.

So, let's do a little exercise. You and I are part of a four-player game, along with our friends Zordon and Alpha. (I'm a Power Rangers fan, deal with it.) My commander is Atris, Oracle of Half-Truths - so the whole idea is to use Fact or Fiction effects over and over and over again. Zordon is the threat, we've all decided, and I've just cast a Fact or Fiction, revealing the following cards. How are you splitting them up?

We're working together, so you're probably going to ask me how I'd like to split them, and which pile I'd like to keep - heck, you may even make it a 5-0 split so I get them all.

Now. Imagine *I* am the threat. I'm gonna go way out on a limb and guess you're not going to ask me what I want. Instead you'll ask Zordon and Alpha, and you'll debate for several seconds if not minutes on how to split them up in such a way that it benefits me as little as possible.

That's why I was so excited when a good buddy gifted me this deck. I've never played anything like it before and I am beyond excited to give it a spin. Before I show you the list, a word of warning from him to me, and now from me to you - this is not a webcam-friendly deck, so hang on to it for the day when we can go back out into the world and play Commander with people in real life again.

Seems like a lot of fun! Fact or Fiction as many times as possible, get the stuff I need into my hand, and try to dump creatures into the graveyard so we can save a ton of mana and get them straight onto the battlefield with things like Reanimate, Sepulchral Primordial, and Necromancy - a card whose rules text makes my brain melt and I've always wanted to try.

So, can we build a whole deck around Fact or Fiction effects?