Today, I want to talk about something serious. Iâm not going to criticize you or tell you what to doâyou are all thoughtful people; you know how to take this information and make of it what you will. All I ask is that you give me a few minutes to talk about depictions of mental illness.

Iâve been sitting on this article for a long time. I first had the idea a full year ago, when I was taking a class on Media Representations of Mental Illness and became aware of these issues. I sat on it because I didnât want to look like I was criticizing Magic for something that is really a widespread cultural issue. (Iâve stepped in that one before.) I was waiting until I could find the perfect, non-confrontational way to say it.

Then, a recent, very public crime happened. If you have heard about it, you know what Iâm talking about. If you donât, it doesnât matter. The important thing is that the media conversation turned very quickly to mental-health issuesâhow mental-health services could have prevented this, what should be done in the future, what the perpetrator may have been diagnosed with.

While conversations about mental health services are incredibly important, the way this has been framed reinforces the link in peopleâs minds between mental illness and violence. A 1994 study in Germany found that peopleâs rejecting attitudes toward people with schizophrenia increased substantially following two highly publicized attacks by people with the disorder and that even two years later, their tolerance had not returned to its original levels (Angermeyer and Matschinger 159). 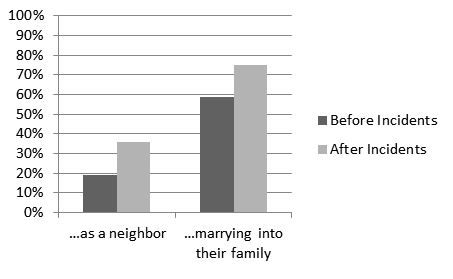 Percentage of people who would refuse to tolerate a person with schizophreniaâ.â.â.â

The association between violence and mental illness is something that we are exposed to day in and day out. We see it on the news, in the movies, and yes, in our own beloved game. We are never going to be free of this message, and given my fascination with the Arkham Asylum comics, I know as well as anyone that we are sometimes driven to seek it out. The antidote to this problemâas it is with so many thingsâis awareness, information, and critical thinking. Itâs time for us to talk about it.

The first time I really encountered someone with psychosis, it was a young man trying to talk to my husband and me as we packed our car in a motel parking lot. We knew from talking to the clerk that this man had schizophrenia and that he had checked in and then stopped taking his medication.

He was tall, slim, and neatly groomed, with long, red hair tied back in a ponytail. I remember thinking that he looked like Zach Weiner of Saturday Morning Breakfast Cereal. He was telling us something about the government and serial killers. The details are hazy because I was trying to politely disengage and get in the car as quickly as possibleâthis was early on in my graduate school career, before I had learned about mental illness stigma or worked with people with severe mental illness, and all I could think was, Oh God, a schizophrenic, and heâs talking about serial killers, and this is how I die.

In retrospect, this was completely unfair. When I really try to remember, I faintly recall that he wanted to warn us about serial killersâhe was worried that the government was hiring them. If I had paid attention, I would have heard that he was trying, in his own way, to help us out. I was too afraid to listen.

Since then, I have had many opportunities to listen to people experiencing psychosis. I spent almost a year doing training in a locked residential hospital for people with severe and chronic mental illness. Although they were taking medication, the majority of residents still had significant psychotic symptoms: delusions, seeing ghosts, hearing voices, and so on. While I was nervous at first, I soon came to know the residents as everyday people dealing with confusing and stressful disabilities.

So, Where Does the Fear Come From?

I want you to think for a second. How much of your knowledge is first-hand? Have you, with your own eyes, ever actually seen a lemur? A space shuttle? France? We are, to an astonishing degree, dependent on the media to give us information. And for the most part, the media is not here to be accurate. It is here to be compelling.

It is no secret that the things that make something problematic can be the exact same things that make them exciting. According to âMental Health Issues and the Media: An Introduction for Mental Health Professionals,â the unpredictability of mentally ill characters brings extra intensity to the horror movies in which they star (Morris 28). âMadness,â usually representing the psychosis associated with schizophrenia and similar disorders, is just one of many tropes used to spice up a moment.

And if youâre using it to add flavor, youâre going to want to use the really flavorful partsâthe parts where the person with mental illness looks unstable, alarming, liable to lash out at any second. Desperate Ravings is going to grab the eye a lot more than a depiction of someone taking her medication or going to group therapy or participating in the community. Any number of characters on cards could be âmad,â and we donât know it because people with psychotic disorders do a lot of things just like everyone else.

But of course, thatâs not what garners a reaction. So we wind up with an unbroken chain, one moment after another, mental illness and dangerousness side by side.

It is true that Magic and similar properties are fantastical and stylized. We donât really expect a man to be able to dual-wield a sword and a flail or an owl to help us counter a spell.

The difference is that when we encounter a man, or an owl, we have plenty of examples to draw on in which they werenât proficient with weapons or counterspells. On the other hand, unless we are in the field or know someone who is personally affected, our memories of people with psychotic disorders are dominated by negative media depictions (Morris 70).

What Is the Impact?

To start with, many people with severe mental illness are very aware of how they are portrayed. A 1999 survey found that almost 47% of respondents with mental illness reported seeing âhurtful or offensiveâ depictions of mental illness either âoftenâ or âvery oftenâ (Wahl 470).

And the problem goes beyond internal experiences. When people were presented with vignettes about people with mental illnesses, 61% believed that the person with schizophrenia was âsomewhatâ or âveryâ likely to be violent (Link et al. 1332).

Now, whenever someone is behaving unpredictably, you of course want to use caution. I always gave plenty of space to people who were agitated or very paranoid. But for people without a history of substance abuse, having schizophrenia doesnât predict violent crime any more than being a young man does (Wallace et al. 477). During my eight hundred hours of training at the hospital, which was filled entirely with people too severely impaired to care for themselves in the community, the most that ever happened to me was being smacked on the arm for standing too close.

As you would expect, the study on perceptions of dangerousness found a significant link between believing the person in the vignette would be violent and being willing to interact with him or her (Link et al. 1332). Adults with chronic mental illness have been found to be among the most excluded groups (Office of the Deputy Prime Minister 3). The stereotype of dangerousness has a serious cost.

As I said, Iâm not here to tell you what to do. Iâm not going to say what to enjoy or not enjoy. Mental illness is used in the media for a reason: It fascinates us.

What I am asking is that you be aware. Aware that âpsychoticâ and âmanicâ are not flavorful ways to say âangryââthey are real conditions that people live with. Aware that many people with psychotic disorders will never be violent, but will spend their lives surrounded by people who assume that they are.

When you meet someone who acts in unusual ways, it is normal to be afraid, but please realize how much of that fear is based on memories of things that never actually happened. 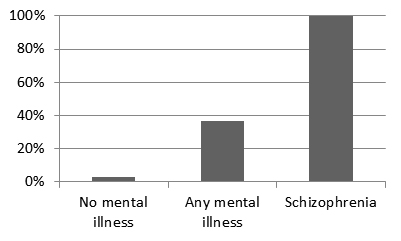 Whenever you see a depiction of psychosis, whether itâs in card art or on TV, please let that be a reminder of this article and of the stigma that people with severe mental illness have to live with.

This hasnât really been a Magic article, per se, but it is an important one. I have been very proud of the Magic community so far. When I started teaching some of the residents at the hospital to play, we received many donations of cards and other supplies. We were able to hold a weekly group, make care packages for people who were leaving, and even run an in-hospital tournament with certified judges. I have generally found the Magic community to be an open-minded and welcoming place. All I want is for my residents and people like them to have a fair chance, and I hope you all will do what you can to help make that happen.

To learn more about schizophrenia and other severe mental illnesses, the National Alliance on Mental Illness is a great place to start. Schizophrenia: Public Attitudes, Personal Needs provides valuable information on common myths, public perception, and what can be done to help.

For information specifically on stigma, Dr. Otto Wahl has collected Resources for Fighting Discrimination and Stigma. If you have questions, feel free to leave a comment or talk to me on Twitter.