The Double Modern Grand Prix weekend is upon us! A few weeks ago I wrote an article with a pseudo-guide book for getting into Modern. After receiving a lot of exceptional feedback and positive responses, Iâve elected to revisit the topic in preparation for Grand Prix Charlotte and Grand Prix Los Angeles. Due to the information density in this particular article, weâre going to skip the fluffy intro and get right to the meat-and-potatoes information section of the piece!

Many Modern archetypes live or die by being able to clog the board in the early game doing one of two things:

There are several ways to combat these strategies, but the most common are having trumps for board stalls, sweepers to deal with multiple creatures at a time, and picking apart the most important pieces of the board while building toward something bigger. One of the best archetypes for combating âlittle kidâ creature decks is Jeskai Control:

Jeskai Control has been historically well-positioned against a majority of creature decks, and it isnât hard to see why. Between Path to Exile and Lightning Bolt the deck has eight 1-drop removal spells, and even more going up the curve. Snapcaster Mage generally has even more removal tacked on to him, then Wall of Omens and Restoration Angel make sure the leftover creatures canât attack effectively any time soon. Kiki-Jiki, Mirror Breaker tends to find his way into the deck just to have a back-door infinite combo with Restoration Angel in case things get hairy and the deck needs an âI winâ button.

Burn is an archetype on the other side of the spectrum that plans to condense the game into as few turns as possible to stymie the growth of opponentsâ boards.

Burn decks, at their core, are just a bunch of cards trying to reduce the opponent to zero life as quickly as possible. Mathematically speaking, Burn needs approximately seven spells to kill the opponent (Seven spells times an average of three damage per spell is 21 life lost) and many of Burnâs better draws need even fewer. A first-turn Goblin Guide on the play can singlehandedly deal upward of six to eight points of damage. With such a fast clock it becomes nigh-impossible for decks to get the time they need in order to assemble a critical mass of creature cards.

Understand How the Infect Archetype Operates

Infect is one of the stranger archetypes in Modern because its power level is somewhat contingent on the opponentâs choices. For anyone looking to play the archetype, or pick it up for the first time, I wrote an incredibly detailed piece on subtle nuances between different builds of Infect. For people looking to beat the deck look no further.

Andrew Jessup played this list all the way to the finals of the Starcitygames.com Modern Open this past weekend in Indianapolis, so it is will I will be referencing for me points:

The point I started this series off with in my initial Modern Tips article was not being afraid to take damage. Infect is a deck where it is imperative to interact in combat as little as possible. Trying to use a removal spell on an attacking Glistener Elf may result in the Infect player using a kicked copy of Vines of Vastwood to counter the removal spell and distribute an additional four poison counters to the defending player.

The best time to try and use a removal spell against Infect is on the Infect playerâs end step. If the player uses a pump spell or a protection spell to save their creature the effects of the spell will wear off as soon as the other player untaps. There are many times against Infect where it is correct to tap out on your turn and just hope you arenât dead. Take the following example: 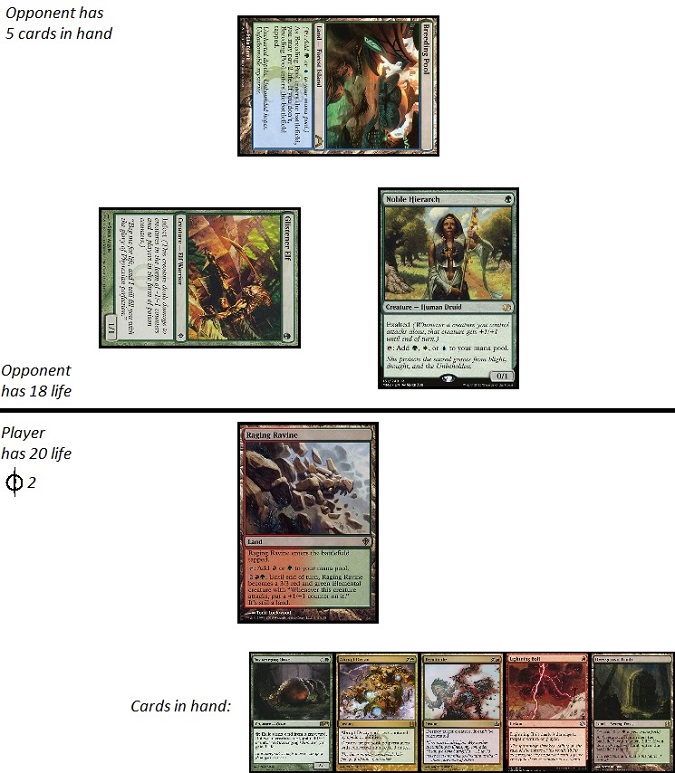 Both players have mulliganed, the opponent to 6 and player to 5. Opponent led with Glistener Elf and followed up with a Noble Hierarch to attack for two Infect damage. Player played a tapped Raging Ravine on turn one and has Scavenging Ooze, Abrupt Decay, Terminate, Lightning Bolt, and Overgrown Tomb in hand during their main phase of the second turn.

In this instance it is assuredly best to Lightning Bolt the Glistener Elf and play a tapped Overgrown Tomb. The Jund player is dead to a pair of Mutagenic Growth anyway, (The Infect player could save the Elf with a pair of Mutagenic Growth) and the opponent having a copy of Vines of Vastwood or a combination of Apostle's Blessing and a pump spell would be a nightmare. It is near impossible for the opponent to have enough pump spells and mana to kill with Noble Hierarch the following turn so it is just as safe to tap out against the Infect deck at this point as it would be in other instances.

In some instances it is necessary to interact with an Infect player inside of combat, in these cases it is crucial to make sure and follow this step-by-step guide:

Playing against Infect is a game of patience and understanding. The deck is scary due to its speed and resiliency, but it is important to remember the deck doesnât have very much reach outside of combat. Any threat the deck has (outside of a tech copy of Carrion Call) will have to survive an entire turn on the Infect playerâs side of the battlefield before getting to attack.

Learn the Difference Between the Two Valakut, the Molten Pinnacle Decks

One of the bigger breakout decks from last weekendâs Modern tournament was a R/G Primeval Titan combo deck playing lands until it kills the opponent:

This deck play similarly to the Standard variation of R/G Valakut Ramp from yesteryear because it just wants to play lands as quickly as possible and start gaining free Lightning Bolts every time it plays a Mountain in excess of five.

One important ruling to understand with Valakut, the Molten Pinnacle is when multiple Mountains enter the battlefield simultaneously,they all âsee eachotherâ. This means that if the R/G Valakut player searches for Mountains number five and six with Primeval Titan and already has a Valakut in play, both of the Mountains will trigger the Zendikar land and six points of damage will be dealt.

The scariest draw out of this deck is a turn three[if the opponent pays two life for a Shockland, Thoughtseize, pair of fetchlands, etc.) kill via Through the Breach in the following sequence:

The horrifying part of this sequence is even in the case where theValakut playerâs opponent hasnât taken any damage from lands , that player is still dead if the Valakut pilot just plays a mountain.

The best way to combat this specific Valakut strategy is with cards that invalidate Primeval Titan or make it weaker:

The next Valakut deck actually has a few different variants, so Iâll list the decklists first and then talk a bit about the subtle differences between them.

The various Scapeshift decks take advantage of the aforementioned ruling on multiple Mountains entering that battlefield at the same time.With seven lands being sacrificed, the spellâs controller deals 18 damage if the player searches for six Mountains and a single Valakut, the Molten Pinnacle. With eight lands, another Valakut is added to the mix and ups the ante to 36 points of damage in one fell swoop.

The ways to combat these decks are different and sideboarding is important, so listen up!

Creature removal is weak against non-Primeval Titan variations of these decks. The most important thing to understand about the various Scapeshift decks is they all operate at a different pace, and you should sideboard accordingly. These are generally the best cards against Scapeshift variants:

That just about wraps up this segment on Modern tips. Was there an archetype you want some more info on that wasnât covered? Have a conflicting take on something? Feel free to drop a comment below with any questions or feedback that you have!