Emerging from the Maze, Sunday

A number of exciting things have happened this afternoon. We've crowned Josh Utter-Leyton as the Player of the Year, played out the quarter and semifinals of an incredible Top 8, and we've seen where the Pro Tour is headed for the 2013-2014 season. Before we get into the results of the finals, take a look at some of the exciting locations: 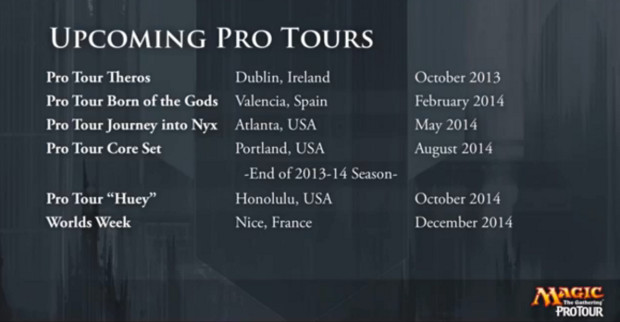 Craig Wescoe met with Dusty Ochoa in the finals of Pro Tour Dragon's Maze. Heading into it the matchup seemed quite favorable for Dusty and his Sphinx's Revelation control deck; however Craig managed to take game one after a mulligan to five when Ochoa started missing land drops. Dusty mulliganed to six heading into game two and was quickly overrun by Craig's Centaurs and Wurms. Craig took down game three in a blistering fashion to become the Champion of Pro Tour Dragon's Maze.

(Trick) Wescoe claims game one after a mulligan to five, going 1-0 in the finals of #PTDGM

Congratulations to Craig Wescoe, Pro Tour Dragon's Maze Champion. He will be the 16th player headed to the Player's Championship later this year and has achieved Platinum status for the next Pro Tour Season. Thank you for checking in with Gathering Magic throughout the Pro Tour Weekend; we'll see you for the World Championship at the end of July.

The semifinals brought us Makihito Mihara matching up against Dusty Ochoa in an Esper control mirror and Craig Wescoe with Green-White midrange and Josh Utter-Leyton with Boros aggro. The Esper mirror match went to five games, each ground out with a combination of Jace, Architect of Thought and Sphinx's Revelation for card advantage and Sin Collector and Aetherling beatdown. On the other side of the feature match area, Josh Utter-Leyton did his very best to chain Burning-Tree Emissary into aggressive two-drops, but Craig Wesoe's larger creatures and Druid's Deliverance on critical turns to prevent lethal and get alpha strike.

Looks like the real tournament is out here in the hallway! #PTDGM twitter.com/GatheringMagicâ¦

Entire camera crew watching matches with @zdch and I. They arenât Magic players,but I think that may change :) #ptdgm twitter.com/Marshall_LR/stâ¦

We'll be back with another update after the final, which begins shortly. Until then keep an eye out for additional updates on Facebook and Youtube pages. If you can, join us for the finals on the official live stream coverage!

After 16 rounds, we have an awesome group of players who are ready to enter the elimination rounds today. The Top 8 is Return to Ravnica Block Constructed, and features a variety of archetypes including various UWx Sphinx's Revelation Control decks and Red- or White-based aggressive decks. Who will come back after lunch to battle in the semifinals? Let's find out what's going on:

It's day 3 at #PTDGM. The top 8, supporters, and crew all getting ready for the event. twitter.com/GatheringMagicâ¦

Far too excited for sleep, but adrenaline is a fine replacement #alsoCaffeine â Josh Utter-Leyton (@wrapter) May 19, 2013

(Trick) We have our first semifinalist: @wrapter wins 3-1 to advance over Shrout #PTDGM â Magic Pro Tour (@magicprotour) May 19, 2013

This quarterfinal between Prost and Wescoe is a huge sweat for me, don't think I can possibly win against Wescoe

(Trick) The Rookie of the Year race has been decided and it goes to Felipe Tapia Becerra (of Chile) #PTDGM â Magic Pro Tour (@magicprotour) May 19, 2013

With these results in, it looks like our Semifinal matches will be: Josh-Utter Leyton vs Craig Wescoe and Makihito Mihara vs Dusty Ochoa. Official streaming coverage will be live in about an hour. Keep checking for our updates from GatheringMagic onÂ Twitter, Youtube, and Facebook.

As the players head into the last round, the Top 8 is all but locked. Even so, players are still battling it out for Pro Points and prizes, so there's still plenty of action. The players at 11-4 are hoping for an outside shot at the Top 8 a d there are a number of matches like Luis Scott-Vargas and Ari Lax who are battling for the right to Platinum status. Let's take a look at how things are going down:

Are any of the top players playing it out or they all drawing? #PTDGM @secludedglenn â Lauren Lee (@mulldrifting) May 19, 2013

@lsv playing Ari Lax, both need to win to Platinum. Quite the stakes for a single match... #TeamCFB #PTDGM â ChannelFireball (@ChannelFireball) May 19, 2013

Lost to Luis playing for Platinum + top Dimir mage. Feel the same was as my last loss to him in Kyoto: excited for the next event.

Additional congratulations are in order for Josh Utter-Leyton, for locking up the Player of the Year with his Top 8 berth, as well as Reid Duke who we believe has earned himself a slot at the Player's Championship later this year. We'll be back tomorrow afternoon with photo updates from the Top 8 of the event. Join us on our Twitter, Youtube, and Facebook Pages!

Into the Back Stretch, Saturday 9:57

There are two rounds to go and the competition for the Top 8 slots is getting heated. There are two players at the top of the standings, effectively locked in with 39 points: Rob Castellon and Craig Wescoe. The rest of the 33 and 30 point players are jockeying for position to see if they'll be able to draw in or setup a win-and-in scenario. Bob Maher and Uri Peleg have fallen away from the top, but titans like Brian Kibler, Makihito Mihara, and Josh Utter-Leyton have ground their way into a winning position. Let's take a look at Top 16 with two rounds to go:

We'll be bringing you more from the floor as the tournament as the last rounds bring us ever closer to the Top 8. Keep an eye on ourÂ FacebookÂ andÂ YoutubeÂ pages for more photos and videos from the event.

It's Day Two, and time for our competitors to get back to work. We started the morning off watching Bob Maher's draft. Things are only going to get more exciting from here, with multiple Hall of Famers near the top of the standings, Rob Castellon leading the pack at 8-0, and plenty of action left to go. Here's what we've got so far this morning:

The start of day 2 with a draft at #PTDGM. The competitors: fewer, but fiercer. twitter.com/GatheringMagicâ¦

(Kevin) Rob Castellon probably won't tear your arms off if you beat him at #PTDGM. Just to be safe, let the Wookie win. #robcastellonfacts â Magic Judges (@MagicJudges) May 18, 2013

Convenient list of points by team members to see how each team is doing #PTDGMRT @rqpr: gist.github.com/anonymous/5603â¦

Tough draft table to start the day, but I drafted a nice one. #PTDGM twitpic.com/crhvbg

We'll be bringing you more photo and video updates throughout the afternoon so keep an eye on our Facebook and Youtube pages. If you've got time, be sure to tune in to the live stream coverage to catch the action as it's going down!

We've had an exciting final two rounds in Pro Tour Dragon's Maze. We saw Denniz Rachid win a game with Maze's End on camera. We saw some of the Hall of Famers like Bob Maher and Darwin Kastle rising to the top of the standings. We've seen the breakout of Precinct Captain as a card that dominates control and aggro mirrors, providing both a brickwall and a clock. And at the end of it all, after eight rounds of play, there are plenty of exciting names in the top 55 players at 6-2 or better:

Rachid just won with Maze's End. Everyone go home. The PT is over. #PTDGM

Some of you were asking for it, here you go: Top 200 all-time money leaders wizards.com/Magic/Magazineâ¦

Coverage starts again on DailyMTG.com at 12 PM EST on Saturday. The Gathering Magic team will be back to work on the floor tomorrow morning as well, so be sure to let us know what you want to see and keep an eye on our Facebook and Twitter feeds for live updates.

We're heading into the fourth round of Return to RavnicaBlock Constructed, and things are shaping up to be pretty exciting. The format looks to be dominated by various Esper Control decks and Mono-Red or Golgari aggro decks. So far we've got Robert Jurkovic, Hall of Famer Bob Maher, and 2007 World Champion Uri Peleg at 6-0 as well as 2006 World Champion Makihito Mihara, Pro Tour Philadelphia Champion Samuelle Estratti, and Craig Wescoe at 5-1. Join us for some of the stories that played out midway through the Block matches, as well as a video interview with Melissa DeTora. Let's head to the floor:

Seeing way more Ral Zareks and Mazeâs Ends than expected, but otherwise field looks like we thought it would.#PTDGM

Keep your eye out for our last update at the end of Day One, as well as additional photo and video updates throughout the evening. There are still two more rounds to go, so head over to the live stream to catch the rest of the action!

Interview with a Planeswalker, Friday 7:15 PM

In his first interview of the weekend, Jack sits down with Nathan Holt from Walking the Planes about his work, his favorite format, and what we can expect from upcoming videos.

Into the Implicit Maze, Friday 3:00 PM

The players have gathered. Decklists have been registered. Pods have been seated and packs have been cracked. What's happened over the course of the first draft? Sean "Day[9]" Plott sat down to draft with reigning Player of the Year Yuuya Watanabe. David Ochoa and Josh Utter-Leyton were seated in the same draft. So were Jon Finkel and Dave Williams. Let's get our introductions out of the way and take a look at what happened during the draft portion of Day One:

What does @lsv eat to prepare for #PTDGM? Bacon and eggs, of course. twitter.com/GatheringMagicâ¦

Table 37!My draft table is composed of sly ballers.In 5 minutes, they will be my enemies. twitter.com/day9tv/status/â¦ â Sean Plott (@day9tv) May 17, 2013

What goes on behind the scenes for the official coverage at #PTDGM twitter.com/GatheringMagicâ¦

What does @jackiel33 think the most powerful common in DGM is? Tithe Drinker #PTDGM twitter.com/GatheringMagicâ¦

After a few rounds of draft action, we've got a few exciting players who have put together a 3-0 start, including Melissa DeTora, Willy Edel, Yuuya Watanabe, Darwin Kastle, Bob Maher, and Andrew Cuneo. What kind of exciting things can we expect to see heading into the Block Constructed rounds? Head over to the Pro Tour Edition of 5 Decks to get an idea of what the Block format looks like. There have been some rumblings of Deadbridge Chant, possibly as a way to grind out the Supreme Verdict decks. The matches will be starting soon so head over to the Live Stream to catch some of the first matches of Return to Ravnica Block Constructed.