Sometimes, there just isnât any getting around the fact that youâre about to enter into something distinctly unpleasant. A swamp is definitely one of those places. Gone are the beautiful free skies of the plains, the proud majesty of the mountains, the cool respite of the islands. There are no fern-laden groves to whittle away the time, no drifting breezes to cool the skin. There is nothing here but stink, sweat, and suffering. This is the place where you have to be careful which bugs you swat for fear that some might swat you back. Itâs a place where you regularly feel something move your leg only to look down in increasing paranoia to see nothing save a slimy trail leading off into the brambles. You are eternally at the mercy of this place, and today is not your lucky day.

Swamps suffer the opposite problem that plains do. Swamps are, by their very nature, a mess. Thereâs a tremendous amount of underbrush, overgrowth, and materials exposed by decay, bugs, lizards, and birdsâthe list is exhaustive. And letâs not forget this is a fantasy landscape as well; there are even more supernatural elements that need to be included on a frequent basis. With such a staggering number of prospective entries into an illustration and with such a small area to fit it all in, the artist is left realistically with only one choice:

With any reduction, the trick is not to make it obvious that things have been taken away. If the viewer even feels that he or she is seeing less than a complete image, the reduction has failed. The eye is very sensitive in this regard, and even if the average viewer canât pinpoint what is throwing him or her off, if thereâs something wrong or missing from an image, the viewer will know. There is a certain level of saturation the eye is looking for in a âcompleteâ image, no matter the subject. This creates a paradox: how to simplify but still keep things âbusy.â

By selecting the one element the artist wants read first and foremost in his or her rendering, he or she can emphasize it to the point of dominance. This is a trick that is done all the time in modern photography and cinematography. Shooting an eye-level photo of a scene with neutral lighting is a guaranteed way to create a boring image. Instead, artistic photographers will zoom in on a critical element of the scene, changing perspective to an unexpected angle or shifting the light to erase unnecessary detail.

MTG artists use these same tricks and techniques in their renderings of swamps. You donât need to know the shape of the beetles that inhabit the leaves of the tree in the background when the whole layer has been faded to a flat, smoky green. It doesnât matter what creatures lurk below the surface of the muck when its glassy-smooth surface is rendered opaque by the brilliant reflections of the sun. You donât have time to consider moss growth patterns when there are towering dragon bones jutting out of the landscape.

Quite handily, this also accomplishes the overarching goal of every good image, regardless of subject or genre: story. By carefully selecting the one thing the artist really wants you to know about this particular swamp, he or she is bringing you into the storyânot only the story of this place, but all the connections between the place and the world it is rooted in and, ultimately, the world of Magic itself.

So what kinds of stories are artists telling about the swamps? 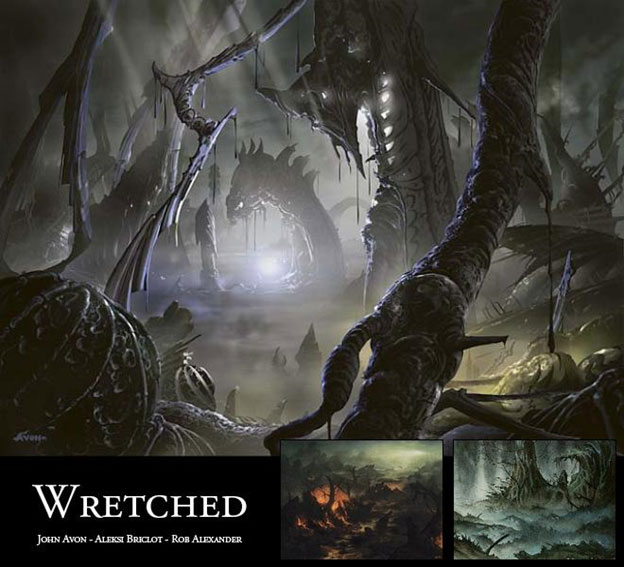 When it comes down to it, the swamp is not a place you want to be in any of the worlds that Magic has to offer. This is the summoning point of the unholy; this is where names are signed in blood; this is where the sun donât shine; this is where this guy is from:

Have you ever seen such horror?

Like it or not, there is a side of this game that is just plain nasty, and more often than not, youâll find most of the bad stuff lurking in the swamps. The Wretched swamps pull a healthy dose of their attitude from the twisted limbs and warped flora the land has to offer. Tree roots are often exposed, giving the landscape the suggestion of some monstrous arachnid. The air is thick with mist, obscuring what may be vital details for a visitor to safely traverse. Lights of unknown origin shine with colors we associate with death and decay. Natural life has long since left these places, the birds too wise to stay and become dinner.

If you share Lilianaâs view on angels, this is the place for you. 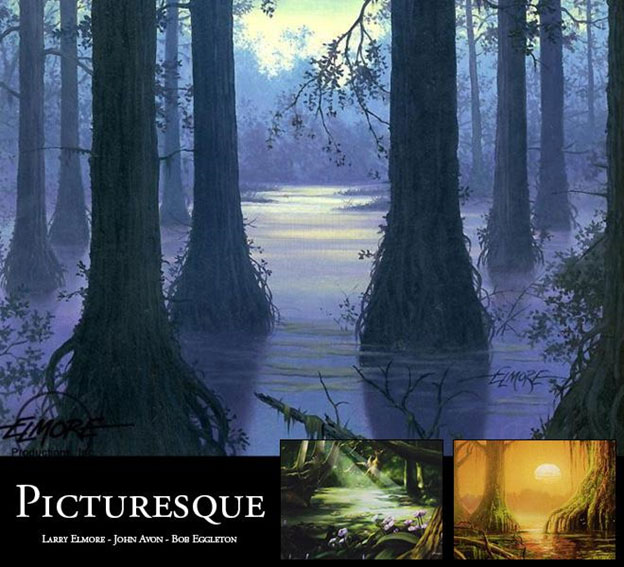 While it is sometimes appropriate to go for the more obvious connection between a swamp and brazen ugliness, many artists seem to take the association as a challenge. Cracking their knuckles, they dig into the painting with the intention to create the exact opposite: the swamp as a place of natural beauty. As a place that is rife with decay, a swamp must also represent a fertile growing space for any number of beautifully colored plants. The lone rays of sun that penetrate the canopy highlight areas of interest, while less pleasant details often are tucked into silhouette or gesture. The color palette also takes on a much more forgiving set of hues in these works, drawing in the warmth of untainted yellows to add a much needed sense of comfort to the scene. Lily pads add a nice touch of whimsy to many of these artworks, dialing back the demonic in favor of the amphibian.

And if a frog in the swamp isnât enough to get you in a good mood, Iâve nothing for you. These lands would go great for those who like a dash of the pretty in an otherwise dark-themed deck, or perhaps a Faeries player who decided to splash black. 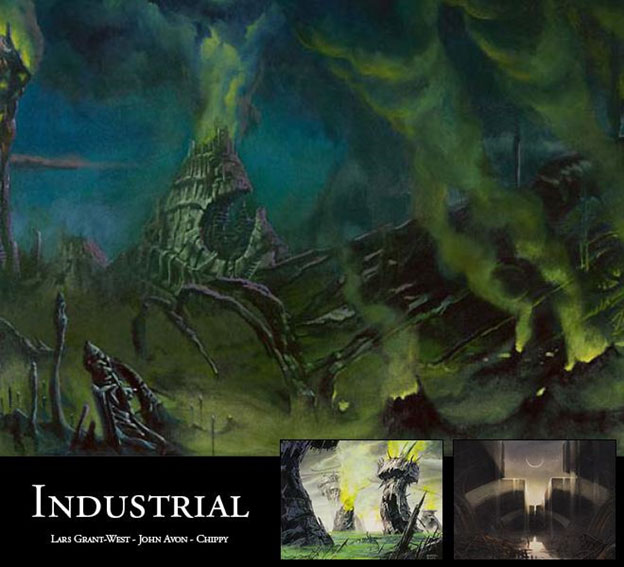 Back to the gritty. Magicâs Multiverse covers a staggering diversity of stories, personalities, and realities. As the proverbial stage for the actors who inhabit these worlds, the basic lands sometimes have to take on unusual perspectives to conform to the new rules as they are being written. So it is that swamps find themselves standing in for heavy industry on a number of different worlds. From Mirrodin to Phyrexia to the shard of Esper, there is no shortage of smokestack structures in attendance, perhaps a bit of commentary about the evils of a post-industrial world and its effect on the environment.

A Phyrexian or infect player would be hard pressed to find a more fitting menagerie of polluted swamp-scapes. 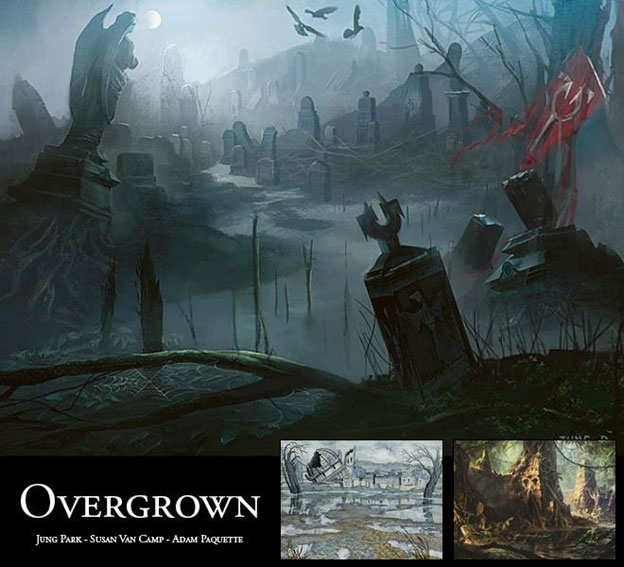 In its continuing struggle with man, nature has been known to win on occasion. Dipping back into some of the themes from the Wretched set, trees in the Overgrown vein tend to have lives and minds of their own. They reach greedily for stone and metal structures that have yet to be claimed, hungry for more of what once was. Most structures have taken on some amount of tilt, their foundations rotting away from below. Visible groundwater factors heavily into these artworks as well, reinforcing the sense of instability. We are left with nothing more than the memories of a story, a place from long ago that is slowly fading into antiquity.

Of course, man does continue on, perhaps against his better judgmentâ.â.â.

Those playing reanimator would do well to consider these lands. 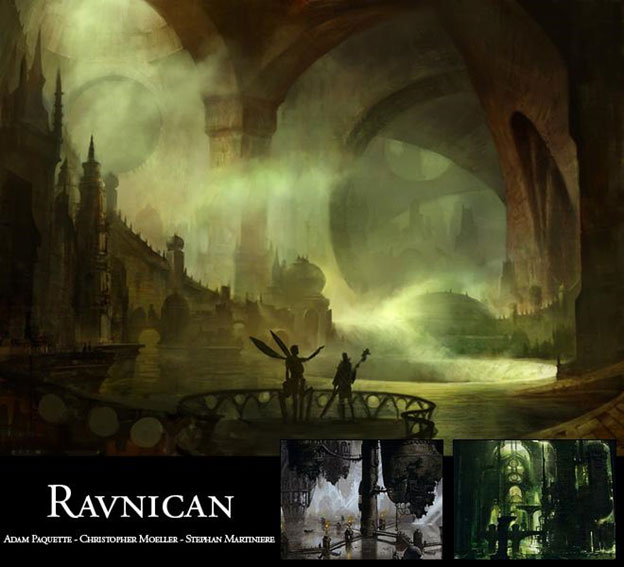 Ravnican basics continue to impress as we enter the undercity and explore the dark depths. The swamps of Ravnica offer a curious combination of several of the other categories explored so far. This is a haven for the underhanded, sometimes brutally ugly and other times awe-inspiring. The architecture enforces a strong contrast between light and dark, throwing hard shadows that reflect the manmade structures. Not content to work with simple straight lines, the artists of the great below have incorporated a heavy number of curves, angles, and circular patterns. The universally urban nature of the plane gives a thorough nod to the ultra-heavy industry that these tunnels service. But despite the grandeur of the construction, all around, there is a definite sense of rot.

While Golgari could find some appropriate cards here, this is all but required for Dimir- and Rakdos-themed decks.

MTG veteran Lars Grant-West claims not one but two Swamp panoramas from Magicâs history. Though the usually-dense nature of the landscape would usually be prohibitive to creating a panorama, many artists have risen to the challenge. Two unique entries in this list take it to the next level by branching (no pun intended) into a second type of basic land for the other half of the image.

Whether youâre looking for an unhealthy dose of the macabre, having your foiled basics in order for your tribal Vampire deck, or just looking for a heaping helping of the creepy, youâd be hard pressed to find more flavors of evil than in the swamp.