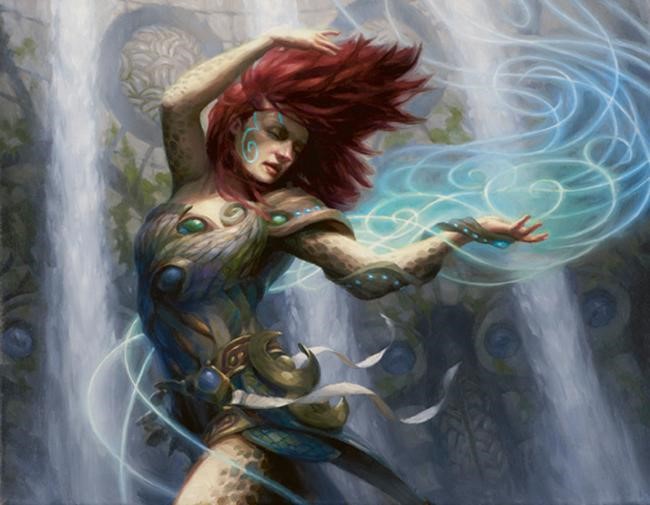 Illuxcon was flooded with highly-skilled professionals. You literally couldnât take two steps in the main showroom without seeing yet another mind-bending piece of fantasy artwork. But even after the oversaturation of imagery, or perhaps because of it, I found myself drawn to Ryan Pancoastâs table by a collection of paintings that were quiet and reflective. We started talking, and the next thing I knew, I was taking notes for my next interview.

Ryanâs interest in art goes all the way back; his favorite toy as a kid was a sketchpad. With the support of his family, he began studying art and decided to pursue a career in illustration. He often cites Norman Rockwell as his chief artistic inspiration. 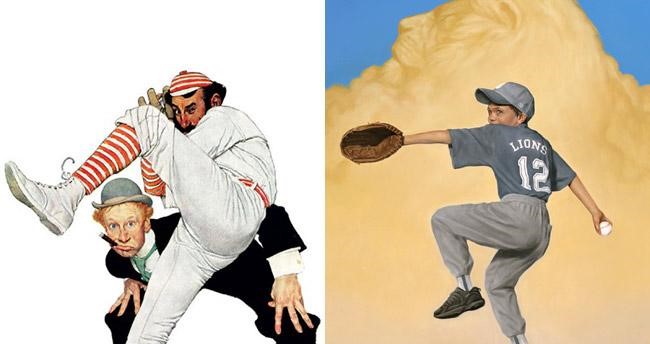 I learned during my interview that Ryan and I attended the same college, Rochester Institute of Technology (RIT), during the same three-year period. While I was learning graphic design, Ryan was a few hundred feet away, working at his illustration skills. I can speak from experience that the programs at RIT were meant to challenge students to the utmost of their abilities, and those lessons continued to gain relevance as time went on. After graduating in 2005, Pancoast worked as an illustrator in various fields, including publishing, editorial, and gaming.

With some real-world experience under his belt, Pancoast attended a portfolio review at Gen Con 2008 that caught the attention of an art director for Wizards of the Coast. A month later, he was painting pieces for Magic 2010. 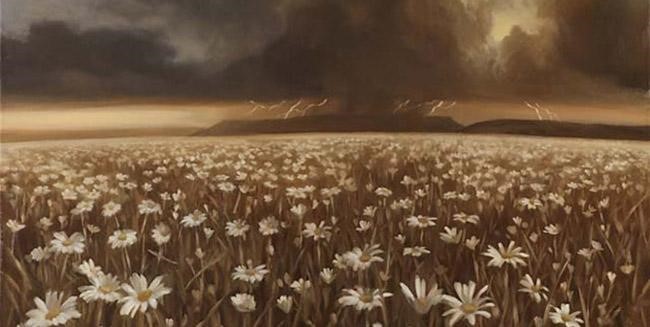 If you have played Magic: The Gathering for any amount of time, you are familiar with Ryanâs work. Leyline of Sanctity, Mistcutter Hydra, Master of the Pearl Trident, Unburial Rites, and Hero's Downfall all sit among the cards he has illustrated. He continues to accept assignments, and his latest MTG work can be seen in the Theros block and this summerâs Conspiracy set.

Ryanâs favorite set to work on so far has been Innistrad. Given his preference for painting the rugged frontier and fantasy scenes, the dark plane is a natural fit. 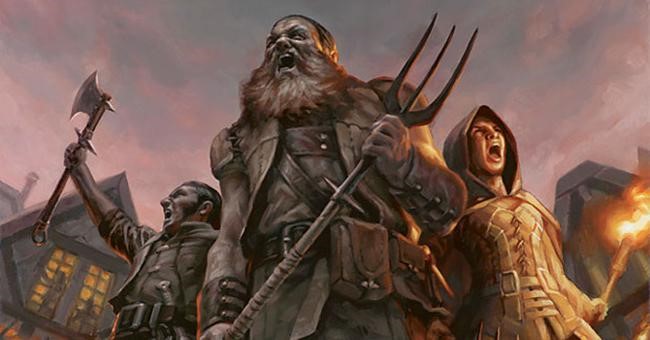 Though he had been accepting multiple pieces per set, Ryanâs new role as a father has him taking on a much more conservative number in order to be everything he needs to be for his son and family. Without as much time to put into his art, Ryan keeps himself sharp by observing the work of his peers and learning from the world around him. Though his new works are largely self-directed, he finds that taking even a single commission from Magic: The Gathering is enough to keep him on point and ready for the next assignment.

The Spice of Life

All the artists Iâve spoken to who are currently working for Magic: The Gathering report that they receive wildly different subjects and stories between any two given projects. Pancoast enjoys the variety, as it forces him out of his comfort zone and into a creative routine that is both professional and flexible for whatever the assignment demandsâartistic cross-training.

Looking at his work for the expansion set Rise of the Eldrazi, itâs clear to see what Pancoast means when he talks about variety. From story to mood to lighting, these four illustrations cover the gamut. Even within the well-defined style of the Zendikar block, these pieces remain distinctive moments in the context of the game. It serves as a wonderful way for Pancoast to showcase the huge variety of techniques and subtle touches that he can call on for an illustration. 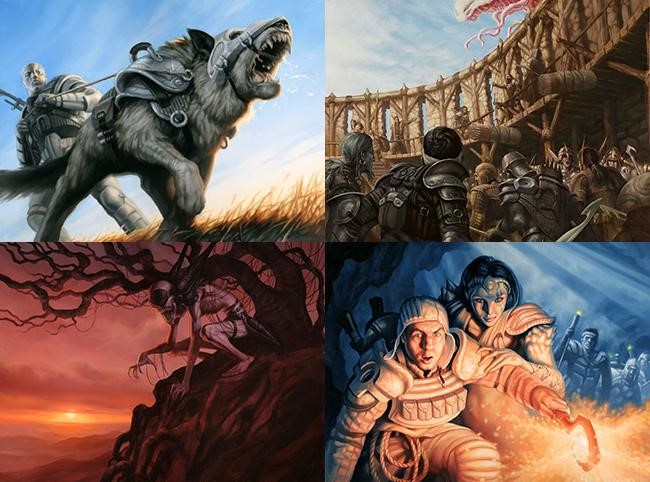 The heavy fog that picks up light in the bottom two images is completely missing from the razor-sharp clarity of a summer morning in the Guard Hound. He's playing with the camera angle to make sure we know exactly who is in charge in each piece. The facial expressions convey struggle, fear, malice, and wonder. The lighting is rendered differently for every material it interacts with; the smooth shading of padded armor versus the razor-thin slits of light on exposed flesh versus the halo of backlit fur. Color palettes shift according to the time of day. He even breaks the fourth wall by having the Escaped Null staring (what we can only assume to be) right at the viewer. Say one thing for Ryan Pancoast; say he pays attention to detail.

The Hero Next Door

Ryanâs favorite subject is the everyman, the humble 1/1 creature with a few lines of flavor text and an ability thrown in for good measure. He finds that with the spotlight cast elsewhere on towering dragons and apocalyptic spells, there exists a more comfortable creative space for his abilities. It is in this quietness, this wonderful in-between breathing moment, where Ryan Pancoast shines.

True to the adage of life imitating art, I found a little bit of the âeveryday heroâ standing before me in the halls at Illuxcon. For being one of the top artists in his field, Ryan is a remarkably humble human being, quiet, focused, and just plain nice. The morning of the interview, Ryan, a couple dozen of the attendees, and I had run a 5k through the streets of Allentown. I watched as he and fellow artist Erik Gist glided up what had to be a forty-degree grade through the final stretch of the run. Even with the three of us finishing shoulder to shoulder, both artists insisted I be the one to receive the âwinnerâ t-shirt. 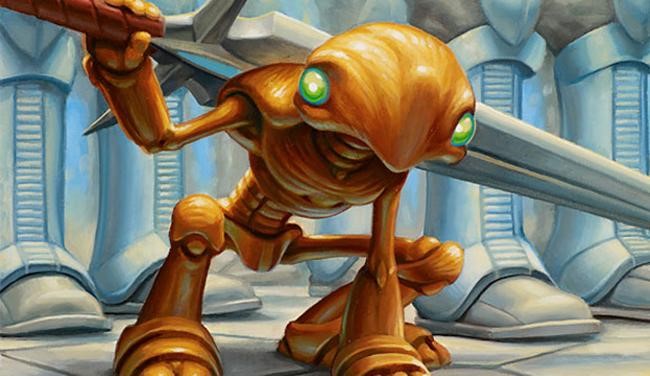 This piece provides one of those moments when the artist shines and has a chance to speak in a way that everyone understands. Itâs the equivalent of the public speaker who can look at a stadium full of people and make every person in the crowd feel as though he or she and he or she alone is being spoken to. Ryan displays a familiarity with the subject matter that can only be attained through the process of falling in love with the subject itself. In Brass Squire, we see this love firsthand.

Pancoast has been very careful to provide a uniform backdrop in every possible way. From the repetition of the boot patterns to the color palette to the tiles of the floor, everything is rendered to be a perfectly-precise world. This stands in stark contrast to our young squire who, while mechanical, is more organic in appearance. The smooth lines of his exoskeleton gleam with the blues and greens of his surroundings, further standing out from the matte glow of the army around him. By keeping the camera low, we gain a firsthand perspective of the world as he sees it, the âgrown-upsâ nothing more than feet and shins. Itâs a classic Charles Schulz technique, and one that pays off. The pose suggests that the sword this little guy is wielding is causing more hindrance than help. But itâs the eyes that sell itâthe gleaming orbs that suggest even in a world that is clearly too big for him, this squire is ready for any task. What he lacks in strength, he makes up for in pluck, and his story suddenly shifts from victim to hero in the making.

Magic: The Gathering is many things, but at its core, the game is about conflict. The world is a scary and violent place, where two or more godlike Planeswalkers have officially decided they canât just get along. Fire, explosions, death, and worse is the order of the day. 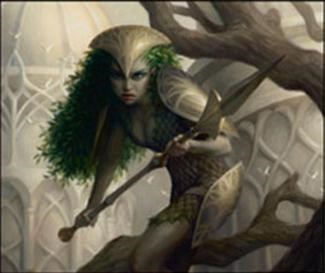 Itâs something I could relate to as a seventeen-year-old, but as a thirty-one-year-old at Illuxcon, it wasnât Ryanâs MTG artwork that drew me in, but rather a new series heâs been working on that focuses in on telling stories that are clearly a part of whom he has become.

You can almost hear the tires screechingâheâs thrown such a hard right turn.

The creatures in this new series, while clearly mythical, are nothing like the ones weâve come to expect from our post-Tolkien mythos. In many ways a throwback to the stories of old, we are treated to a series of spirits, monsters, and moments that demonstrate caring and gentility. Things move a little bit slower here, at a more humane pace. Just as caring for his son moves from day to day, Pancoastâs narrative focuses on the consistently reinforced moments of his characterâs lives. These are the âlittleâ moments that Ryan loves to show, as a means of inviting us into this new world.

There are weapons, though they serve a different narrative purpose; theyâre pointed away from the viewer, treated as a tool more than an implement of destruction. Hunting is referenced many times, but the violence of the act is tempered by the goal of sustaining life and providing nourishment to those who cannot provide for themselves. Thereâs a practicality to it all, a reason for things to exist rather than just for show.

In his transition to fatherhood and the everyday heroism that comes with it, I believe Ryan has found the new core of his message to the world. His menagerie of emotional beasts and subtle humans serve as the messengers, set in the idyllic beauty of the American frontier. Pancoast plans to continue producing pieces through the coming years, letting the world grow and flourish with his images. From what Iâve seen, this is a world weâd all be better off spending some time in. Iâd say I canât wait for more, but after considering what these images have to sayâ.â.â.âmaybe I can.