Coming back after winter break (and the awesome "tournament" we had thanks to Magikids) the kids are still just as excited about Magic as ever. Of course, before break many of them requested that I work on designing and completing decks for them during the days we had off. It goes without saying that I would have been doing this whether they asked me to or not, but this definitely added to the enthusiastic energy we all felt as we returned to school, ready to sling cardboard with each other once again!

With our club being held every Friday, my first chance to play with students actually came the Monday we returned from break, as this is when I spend a few hours after school tutoring kids off campus. Among those that frequent the tutoring center are brothers Julien and Cyrus, and a few other MTG aficionados. Usually, we'll spend a short amount of time making sure everyone's homework is completed before diving into card games while the kids wait for their parents to pick them up. The following are some of the lists that have made their way to the tutoring center in one way or another. 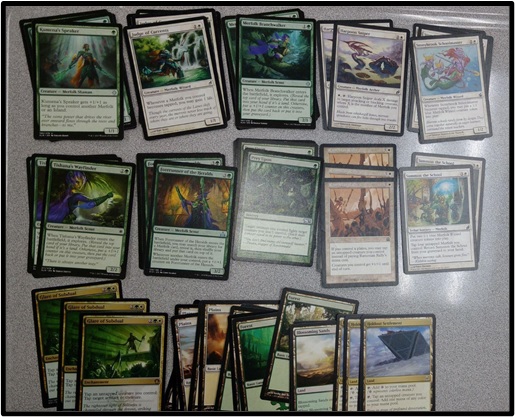 I've written about Jason before, and though he is not one of the regulars at the tutoring center, he does come to the club every Friday. He also seems to have a thing for merfolk, as it looks as though he's been gathering different types of merfolk decks for his collection. Of course, he asked me to design one for him, which I completed and then tested with the tutoring kids before handing it off to him. I wanted to go with something unique that I didn't think he'd already thought of, so I decided to eschew Blue completely, instead opting for a Selesnya strategy.

Stonybrook Schoolmaster and Judge of Currents are the most important of the deck's fishy fighters. Each provides a bonus of either life gain or additional troops every time a merfolk is tapped. Traditionally, this would happen through attacking. We've got a few tricks up our sleeve, though, to allow Jason to tap his merfolk without putting them in the line of fire.

Holdout Settlement, for example, gives us the ability to tap any merfolk we want in order to produce colored mana of our choice. This prevents us from getting locked out of casting spells due to mana color issues, while also synchronizing with the core strategy of the deck. Glare of Subdual is an on-color pseudo Opposition that not only provides a means to tap any merfolk we want whenever we want, but also helps to neuter opposing creatures. With Glare, we can either tap down enemy threats before they have a chance to attack us, or eliminate the opponent's ability to block our own attackers. This becomes insanely powerful when you consider the token production of Schoolmaster. Speaking of tokens, Summon the School also helps to fill the field with fish while giving yet another method of tapping them. What exactly are we supposed to do with such a huge army of merfolk, you ask? Well, Ramosian Rally them into respectable threats, while also producing more threats, of course! 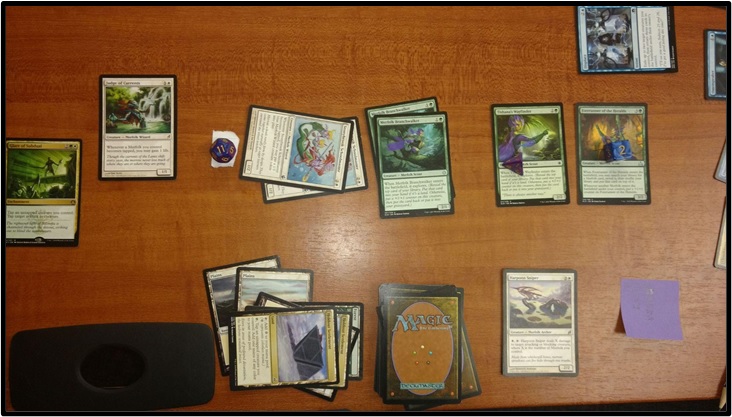 Kumena's Speaker is included as a simple cheap beater, while Merfolk Branchwalker and Tishana's Wayfinder help to filter Jason's draws. Forerunner of the Heralds searches out either of the core White merfolk he might be missing, but can also find Summon the School or Harpoon Sniper (who has great synergy with Schoolmaster and Judge since he taps himself) as needed. Paired with the token spewing power of Schoolmaster, Forerunner often grows into a large threat very quickly.

Some of the best things to come out of this list are the lessons Jason has learned while piloting it. Learning the proper timing for Glare of Subdual, as an example, has helped him to recognize all sorts of plays that can be made at instant speed, and the best time to make them. He now knows that he can tap his opponent's monsters in response to them shifting to their battle phase. Gaining life at the opponent's end step is also something he's getting in the habit of doing! 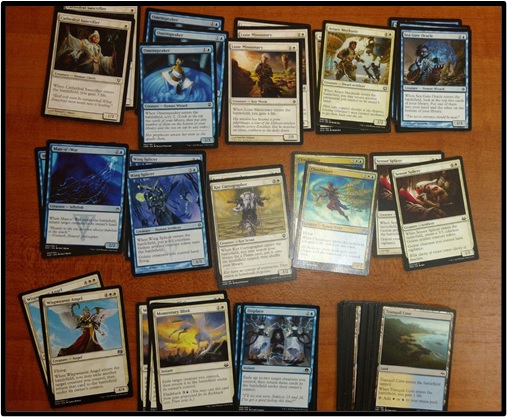 The same Cyrus who earned himself the robot decks from our last article had his own request, though it was much less specific. All he wanted was something weird and "cool" that no one else was really doing. I didn't have much to go on with that, but I did have a playset of Momentary Blink and Cloudblazer, so I found some creatures with strong ETB (Enters the Battlefield) effects, and a Blink deck was born!

It's a tried and true strategy that we've seen even here in my High School MTG series: Play creatures that have abilities that trigger when they come into play, and then use "blink" effects like Momentary Blink to exile and return them, repeating their ETB effects and gaining card advantage in the process. While the true strength of these strategies come from learning the proper timing of the blink effects, they are incredibly fun to play even when the pilot does so suboptimally. So, I knew Cyrus would have a blast with it.

The most important detail in both Momentary Blink and Displace is that each single card allows for multiple ETB triggers, which makes them perfect poster children for card advantage. This particular list has an uncharacteristically high mana curve, so, many of the creatures were chosen to work around this fact. Cathedral Sanctifier and Lone Missionary, for example, gain Cyrus life in the early game so that he has the cushion to take hits while he builds up his mana, draws cards, and plays out his weaker creatures. Kor Cartographer, Sea Gate Oracle, and Omenspeaker make sure the land drops continue, with the ladder two also filtering for other desired cards.

Wing Splicer and Sensor Splicer are Cyrus' main method for ending the game. Wing Splicer is especially powerful, as giving all his golems flying means it's that much more difficult for the opponent to guard against the onslaught. Cloudblazer also comes with evasion, and is likely the best target for any of the deck's blink effects. This includes Wispweaver Angel, which tops the mana curve.

There are a ton of options for Cyrus to dip his toes into, should he have the desire to swap out some of his ETB creatures. Notably, I would consider more ways to deal with larger threats. As of now, all he has is Man-o'-War to bounce them and golems to overwhelm them. Something like Fiend Hunter could help deal with high-stat enemies. In other areas, Soulherder would be simply insane if we could find any, and I've definitely considered Faerie Miscreant as an alternative to Sea Gate Oracle or Omenspeaker. 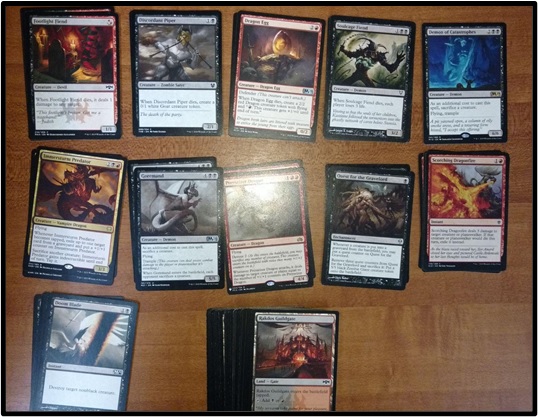 Cyrus' brother Julien had one of the most interesting requests for me. He's one of those players who's all about the aesthetic of the game. He wanted something cool, and to him, the coolest concept he could think of was, "a Dragon and Demon deck!" Short of building something around Malfegor, I wasn't sure what I could do with such a theme that would still work with a play style that was more than just play on-theme creatures and turn them sideways. I'm actually pretty proud of what we ended up with in the end, though.

Cost: $13 at the time of publication

In order to maintain a proper mana curve, I knew I would need to play low-cost devils (not technically demons) like Footlight Fiend. This nudged me into the Aristocrats path that, at this point in the series, we're all familiar with. I wasn't confident I could find dragons that fit the strategy...until I found a play set of Dragon Eggs in the bulk! From there, the actual gameplan of the deck was decided on. Though I ended up having to pull some rares from my personal collection, everything came together much better than I expected!

Footlight Fiend, Discordant Piper, Soulcage Fiend, and Dragon Egg are the tribute fodder of the list. Because the general theme and aesthetic were the most important part of the deck for Julien, I put a lot of effort into making sure I stuck to it. As an example, in terms of creatures that replace themselves when they die, there are better options out there than Discordant Piper. However, the goat/satyr aesthetic jived well with the demon theme Julien asked for.

Immersturm Predator and Demon of Catastrophes are the most common of the larger threats Julien will draw into and play. For the low cost of gobbling up one or more weaker creatures, they provide him with a frighteningly powerful attacker. Each has their merits. While the Demon has the ability to trample over smaller blockers and has better stats, the Predator acts as a free and repeatable sacrifice outlet that grows over time. This is relevant for easily hatching Dragon Eggs, or for finishing off opponents from afar with Footlight and Soulcage Fiend burn.

On the higher part of the curve, Preyseizer Dragon and Goremand reign supreme. Each removes opposing threats and blockers, and each is a clock to respect. Preyseizer Dragon in particular can get really nasty. Targeted burn with every attack feels broken in any casual meta and makes him a must-answer creature the instant he hits play.

I don't necessarily like Doom Blade compared to other on-color options (Terminate would be ideal) but it's all we had access to for the moment. It's also possible that the list could use some card draw, like Village Rites. With no filtering or draw to speak of currently, I fear that it's susceptible to bricking. Time will tell, though. At the very least, no such problem was seen in the games we've already played. All in all, Julien was more than happy with the final list!