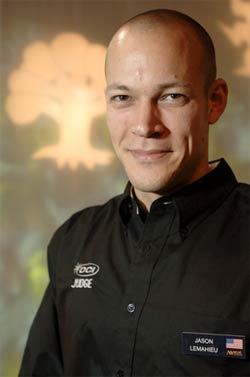 As Sheldon Menery concludes his final Head Judge event, he announced via his personal Facebook account that the well known L4 judge Jason Lemahieu has been promoted to the rank of L5 judge. Jason Lems joins Toby Elliott, Riccardo Tessitori, and Scott Marshall as active Level 5 "Professional Judges." Sheldon made the announcement on his wall saying the following:

"One of the pleasures I've enjoyed that few other men have is promoting someone to Level 5. Jason Lems: I built it, now you perfect it."

Level 5 judges are titled "Professional Judges" and are defined as follows by Wizards:

Level 5s are Professional Judges who have demonstrated and maintain their experience, skills, and dedication to the DCI and its organized play. They are capable of head judging Pro Tour events, organizing a staff of judges, and contributing to the development of the Judge Program. They have shown a superior level of diplomacy in their dealings with players, judges, and the DCI (both regional and worldwide) and are the worldwide leaders. - Read More.

Our congratulations to Jason Lems for his new rank and our thanks for his continued work in improving Magic and competitive Magic as well. We also wish to extend our thanks to Sheldon Menery, honored at Worlds for his long standing contributions and hard work building the Magic judge community into the thriving force it is today.