âWhen are you going to do a 75% Tiny Leaders deck, Jason?â
âMy legion of fans

Okay, I hear you loud and clear. I recently found out about this fad among the Commander community, and I decided today was the day to write about it.

A lot of the feedback I received about Shu Yun, the Silent Tempest was that he would make a good Tiny Leaders commander. If youâre not familiar with the format, Tiny Leaders is a Commander variant in which you play a fifty-card singleton deck, and all cards have to have converted mana costs of 3 or less. There is a special banned list to cover some peculiarities of the format, such as that Sword of Body and Mind would make the format zero fun. You have fewer cards than you do in Standard Magic, after all. The full comprehensive rules and banned list can be found on the Tiny Leaders blog site. It looks like a cool format, and itâs worth exploring. However, who should be our tiny leader?

My first thought was to do another deck based around Shu Yun since he looks like Shu Fun (autocorrect revealed this pun to me once, and Iâve been repeating it ever since), but thatâs lame. Besides, we already have a sweet-looking Shu Yun Tiny Leaders deck from Andre Garcia that was showcased in a recent Inside the Deck installment on Gathering Magic. Letâs do a brand new commander. Luckily for me, Wizards of the Coast came through for me on the day this was composed, and I have a commander to brew with thatâs so fresh that the ink is still wet. Letâs do some damage. 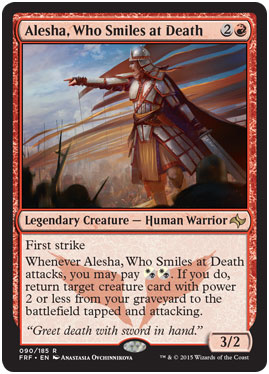 Aww yiss. Thatâs so saucy youâll need to laminate your other cards. This puts us in Mardu colors, gives us a way to recur creatures in the deck with low power, and holds its own in combat. This may be a better war leader than Voltron commander, but from what Iâve heard, Tiny Leaders plays out like Legacy Light, so we can probably just jam some good cards and see what trouble we get into.

I decided to look at a few of the creatures that decks like Shirei, Shizo's Caretakerâs run to give me some ideas about busted interactions. I also have to remember that I canât run Sol Ring, so I guess I canât even say, âWell, time to find forty-eight more cards!â But while I canât run Batterskull, I can run Stoneforge Mystic. The more I read, the more I discovered that Tiny Leaders really is a bit more like Legacy Light than it is like Commander. Can applying the guidelines from the 75% series to this new format help us come up with something good?

The Martyrs could be good, especially Martyr of Sands and Martyr of Ashes. Cards like Mogg Fanatic may be good enough in a 25-life formatâIâm not sure. What Iâm most excited about is jamming Sunforger in here with some good spells because being able to rebuy them out of the âyard makes creatures like Young Pyromancer and, more excitingly, Monastery Mentor that much more playable. I may even jam Stoneforge Mystic to find my Sunforger. So what would the deck look like?

Does this look a little rough? I tried to maximize the utility I would gain out of cards like Young Pyromancer and Monastery Mentor by going heavy on spells. Running Sunforger allows me to run a lot of good spells and make sure I get tokens going. The plan is to swarm the opponent with tokens. I included a few ways to take his or her creatures to help with the scaling problem. Jeering Instigator is a card I donât see in many Tiny Leaders lists, but itâs a powerful one in a creature-light format. Being able to borrow a Tarmogoyf or Doran, the Siege Tower for a turn is probably enough to end the game. The number of creatures in play is a zero-sum game, and stealing one of the opponentâs is a 2-point swing in your favor. That sounds good, especially for a creature that can rejoin battle in some capacity when heâs spent.

There are probably a lot of different ways to build this deck. The Internet is really excited about Alesha because she is the first eligible Mardu-colored tiny leader printed. I think weâre going to see a lot of exciting builds, not just âMardu good-stuff,â but Mardu good-stuff would actually be kind of fun. I stuck to the deck-building principles outlined by the 75% theory, and I think we came up with something fun. It scales as well as can be expected with only red and only fifty cards to work with, and it tries to win a different way every time. I even cut Stoneforge Mystic so you donât just try to win with Sunforger shenanigans every time. Youâll draw Sunforger often enough with a fifty-card deck.

I try to shake things up every once in a while here. Iâve done Pauper Commander, and now Iâve done Tiny Leaders. I hope you enjoyed this brief foray into a wacky, new (not that new, but recently adopted) format, and weâll be back with our regular fare next week. Keep sending me your decklists, encouragement, and ideas. I even like receiving negative feedback, especially when the grammar is terrible. Until next time!