Welcome back, readers! How long have you been reading this series? You can probably measure it in terms of how many times I've written articles about Intruder Alarm/Opposition in an Elves or Squirrels shell. If you have been reading this series for quite a long time, you have read about that sort of shell a great many times. Well, in keeping with tradition, I have found another excuse to brew that sort of a shell but, get this, no Elves or Squirrels this time. I mean, I can't promise there will be exactly 0 Elves and Squirrels in the final build, but I can say that it's my intention to build a tribal deck in that shell and run mostly if not all cards of another tribe. Which tribe, I hear you asking. I'm so glad I pretended you asked me that. Why the answer should be obvious if you are up-to-date on Rivals of Ixalan previews. Or if you read the blurb for this article. Or read the title of the article. Or if you can use your peripheral vision to see the picture right below this paragraph. OK so you figured it out. What do you want, a decklist? Well, good; you're getting one of those. 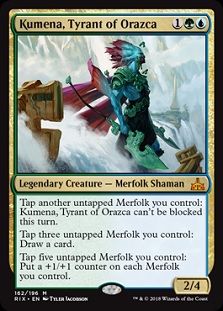 This merfolk demands to be played with other Merfolk, that much is obvious. What's also obvious is that I want to make a ton of merfolk and make them untap a lot. My Intruder Alarm alarm was immediately tripped by this card, which means there is a great deal of the deck decided already, which I'm fine with. Remember the Kydele/Thrasios deck I got sick of playing with because it was so linear and I always ended up going infinite and drawing my whole deck? I'm thinking of burning it down and building it all over as a Kumena deck. For reference, here is that old list;

This deck is one I keep coming back to because it's powerful and has a good infrastructure but was ultimately unsatisfying to play with because it was so linear. Instead of generating infinite mana by untapping Kydele after drawing a ton with cards like Umbral Mantle, what if I went wider and found ways to untap the whole team, thereby giving me a lot of utility with the single commander in the deck? I could still keep cards like Paradox Engine because it's a good card but I wouldn't be as much a combo deck as I would a value deck. I can still go infinite with Dramatic Reversal or Benefactor's Draught (something I hadn't played before but which seems like a ton of fun when you're tapping a ton of Merfolk tokens and finding ways to retap them) on an Isochron Scepter, but with no way to tutor for it, I'm most likely just going to use those cards without the scepter to make our combat phases way better, or KO someone with a really buff Kumena. I require a larger board to go off than I would with Kydele and Thrasios; and, with merfolk instead of elves, it will be tougher to generate mana from tapping creatures, meaning I will be very dependent on mana rocks. In short, I can get the combo wins I used to get, but with them requiring so much more setup, if I get those wins, it's because my opponents put no pressure on me. I'm much more likely to win by getting incremental advantage and making the most of my commander. I'm actually excited to build this.

Some cards that I didn't really play before include Opposition, Benefactor's Draught, Stoneforge Masterwork, and a ton of Merfolk cards. The cuts are equally obvious -- we're not trying to just untap one creature and get a ton of mana so we're eschewing cards like Umbral Mantle and Staff of Domination. Instead, we want mass untaps so our Paradox Engine package will include cards like Vitalize that can either go on a scepter or just give us a ton of creature untaps with Engine out. This also lets us play a few Lorwyn block, Merfolk-centric cards that can give us some untaps. I was also turned on to the card Quest for Renewal which isn't for Merfolk, per se, but is Green so we gets to jam it. All in all, I think we're going to get so many untaps that we can do serious work with a mere three Merfolk out but a lot more the more we get.

Lorwyn block (meaning the four sets, L.M.S.E.) re-introduced Merfolk after a hiatus and gave us two kinds of Merfolk cards -- ones that were playable in Standard and Legacy (and later, Modern) and the ones that were relegated to Limited. Some of those Limited cards are pretty good upon revisiting -- how many of you know what Fallowsage does without looking it up? How about Grimoire Thief? Merrow Commerce? Get yourself familiar with them because they are going to do a ton of work, either getting us bonuses when we start tapping Merfolk down or helping us tap or untap them. We're likely to really richen our creature base relative to the Kydele//Thrasios deck at the expense of some spells but I expect it will be more than worth it.

Using the Kydele//Thrasios list as a rough outline, how do we preserve some of that infrastructure but optimize the deck for tapping as many merfolk as we can manage to generate? How much of the original deck will be left? Let's take a crack at it and find out.

I have no idea if this will work! Do I have enough merfolk to reliably turn on all of our commander's abilities? Will it matter if we "only" get to draw a bunch of extra cards and then untap our creatures as often as we can? I think we may be OK if we're not putting counters on everything, actually. Here's what I think we do well.

We have a lot of Yo! M:tG untaps. We have Benefactor's Draught and Dramatic Reversal and Vitalize which are good with Paradox Engine and fine on their own and great on an Isochron Scepter. Even with only 3 merfolk, we can get a ton of advantage at the end of opponents' turns and we have infinite combos which can give us a ton of Sprouts or bounce all of their permanents with Capsize. Most of the work that Paradox Engine does, though, will be letting us be explosive in our development and keep our hand stocked.

I think we also play the tribal Merfolk game well. I added Merfolk I think play well with others or have very good abilities, like Empress Galina (yes, she's a Merfolk and yes, she's really that expensive. Nothing I can do about the price, sorry). We have cards I love to run, like Thada Adel, Acquisitor, and new cards I am just realizing I love to run like Herald of Secret Streams. When we're ready to go "wide" we should be able to commit 2 or 3 unblockable Merfolk to each person and have that be enough to kill them. Earlier than that, Stoneforge Masterwork on Kumena can KO someone pretty handily.

I think we'll struggle to get a ton of Merfolk going. If you want more utility from Lullmage Mentor, you can add more creatures and counterspells to make sure you can use it to its full potential. I added "bad" cards like Volrath's Laboratory and Riptide Generator to give us a few more Merfolk tokens since they will get a lot of tribal bonuses and help us activate Mentor and Kumena. Short of adding baddies like Benthicore or trying to make some Master of Waves/Xenograft magic happen, I think I did the best I could. We miss out on a few cards that generate 1/1 Merfolk tokens (but not many) by not having access to White.

What do we think? Am I onto something? Should I go back to the Kydele/Thrasios build I got bored with? Should I stop making so many Simic decks with Intruder Alarm and Opposition (NEVER!)? Let me know in the comments section. Rivals of Ixalan looks great and there are a lot of great Merfolk to slot into our Simic decks to try out, so let me know how your testing goes. Remember, Grimoire Thief can counter a spell from a different opponent, so if you get something juicy tapping Grimoire Thief you can really pull someone's pants down when they don't expect to get their spell countered in a singleton format. Tell me how your Merfolk games are going. We'll see you next week for the set review. Until next time!